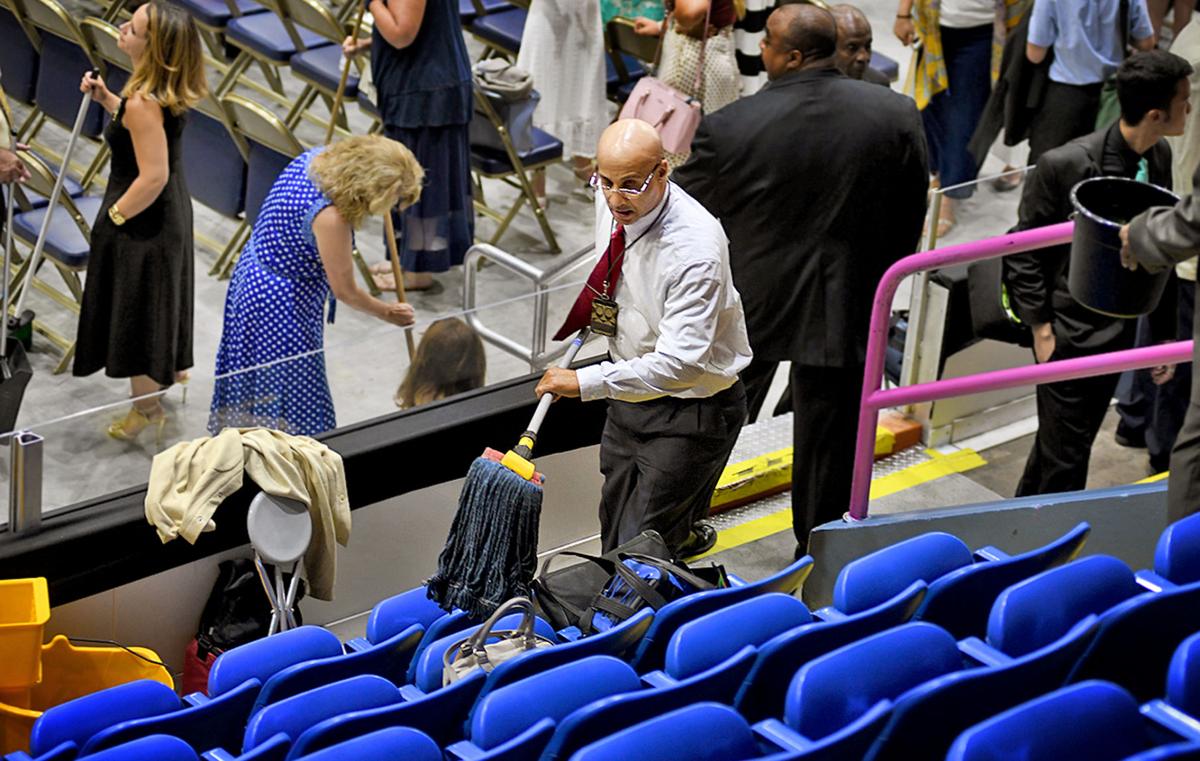 Gregg Tolliver (center), of Pittsburgh, along with more than 1,000 other Jehovah Witness convention attendees, pitch in to clean 1st Summit Arena @ Cambria County War Memorial at the conclusion of the event on Sunday, June 30, 2019. 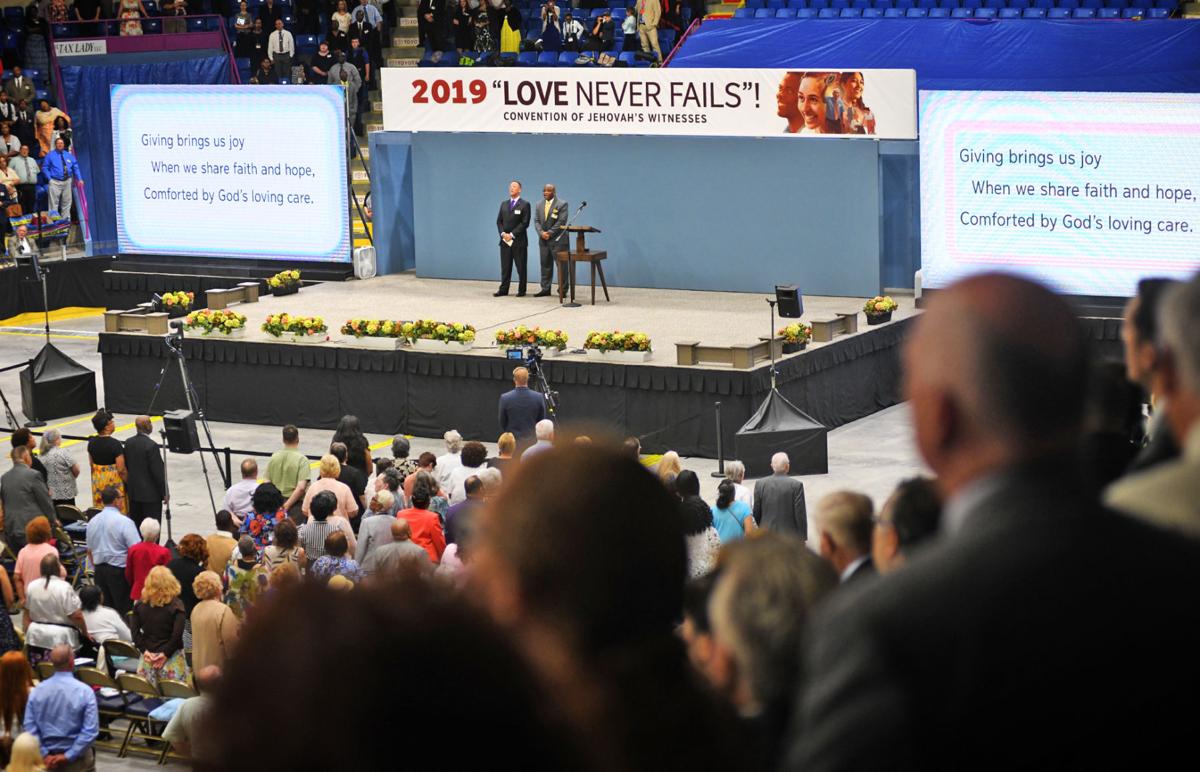 Gregg Tolliver (center), of Pittsburgh, along with more than 1,000 other Jehovah Witness convention attendees, pitch in to clean 1st Summit Arena @ Cambria County War Memorial at the conclusion of the event on Sunday, June 30, 2019.

A month of conventions drew to a close here Sunday with a crowd of 3,300 Jehovah’s Witnesses standing side by side and singing “Unfailing Love” and a minister encouraging them to return that love – not just to their lord but to each other and the communities around them.

And with that, convention delegate Gregg Tolliver picked up a mop and began wiping down 1st Summit Arena @ Cambria County War Memorial’s Section 2.

“Thanks to Jehovah, our God ... I am giving back,” said Tolliver, mopping an aisle of seats while dressed in a white shirt, slacks and a tie. “He shows us love, and we imitate him.”

Tolliver was far from alone Sunday.

In what has become a tradition inside the arena following the religious group’s annual conventions here, a group of more than 1,000 spent their evening cleaning up from their event, sweeping floors, wiping chairs and disassembling equipment that will be hauled off to upcoming conventions in the days to come, organizers said.

Some traveled as many as three hours to back up the delegates, donning hard hats, goggles and vests to get the arena back in order, convention spokesman John DeSantis said.

“We’re so grateful to the city of Johnstown – and this arena for hosting us,” he said Sunday. “After the experience we’ve had here, this is our way of returning our love.”

According to DeSantis, more than 10,000 Jehovah’s Witnesses, family members and guests from all or part of five states – Pennsylvania, Maryland, Ohio, West Virginia and Virginia – attended convention events at the arena this month.

Much like more than 500 other Jehovah’s Witness conventions held across the globe this summer and early fall, this year’s theme in Johnstown was titled “Love Never Fails!” and Jehovah’s Witness Minister Wendell Shepherd reminded attendees to show Jehovah their love for him by loving one another in the days, months and years ahead.

“Life can tend to weigh you down. We all need to hear that reminder to ‘show love’ sometimes, in a world that could stand to have more of it,” Nicole Morris said.

The Pittsburgh couple, joined by their son, Jake, 16, and daughter, Mattie, 13, said they’ve been attending the conventions in Johnstown since the event’s first visit to the region in 2012.

They described their week as a spiritual, “uplifting” experience that also gave them a chance to come together as a family – an effort that isn’t always easy at home due to busy schedules and lives.

As it has been since 2012, the Johnstown community was a warm and welcoming host, Travis Morris said.

That included the University of Pittsburgh at Johnstown, where they stayed since Wednesday, restaurants such as Tap 814 and residents they met along the way, Travis Morris said.

The conventions pack the area’s hotels – filling more than 600 each week, organizers said – while sending many attendees to Pitt-Johnstown dorms and other local lodging to handle the overflow.

“The college spoils us. We couldn’t ask for better treatment,” Nicole Morris said.

“We’re always getting people just walking up and saying hello to us, and asking how we’re enjoying ourselves – people in the streets we’ve never met before,” he said. “We look forward to coming back every year.”

The event has been an economic engine for the city in recent years, bringing a crowd of guests to the region for three weeks in June.

“They’re just phenomenal to have here, and you always know when they are in town,” said Jayne Korenoski, the Greater Johnstown/Cambria County Convention and Visitors Bureau’s director of special events and advertising. “The restaurants are fuller. There’s more activity downtown.”

She said the relationship between the group and the visitors bureau has become a “real partnership” over the years, and that it’s clear that the Jehovah’s Witnesses recognize the value and benefit of bringing their event back from year to year.

DeSantis indicated the event’s 2020 location is not yet determined.

“But we hope we’ll be able to return again,” he said. “Time will tell.”