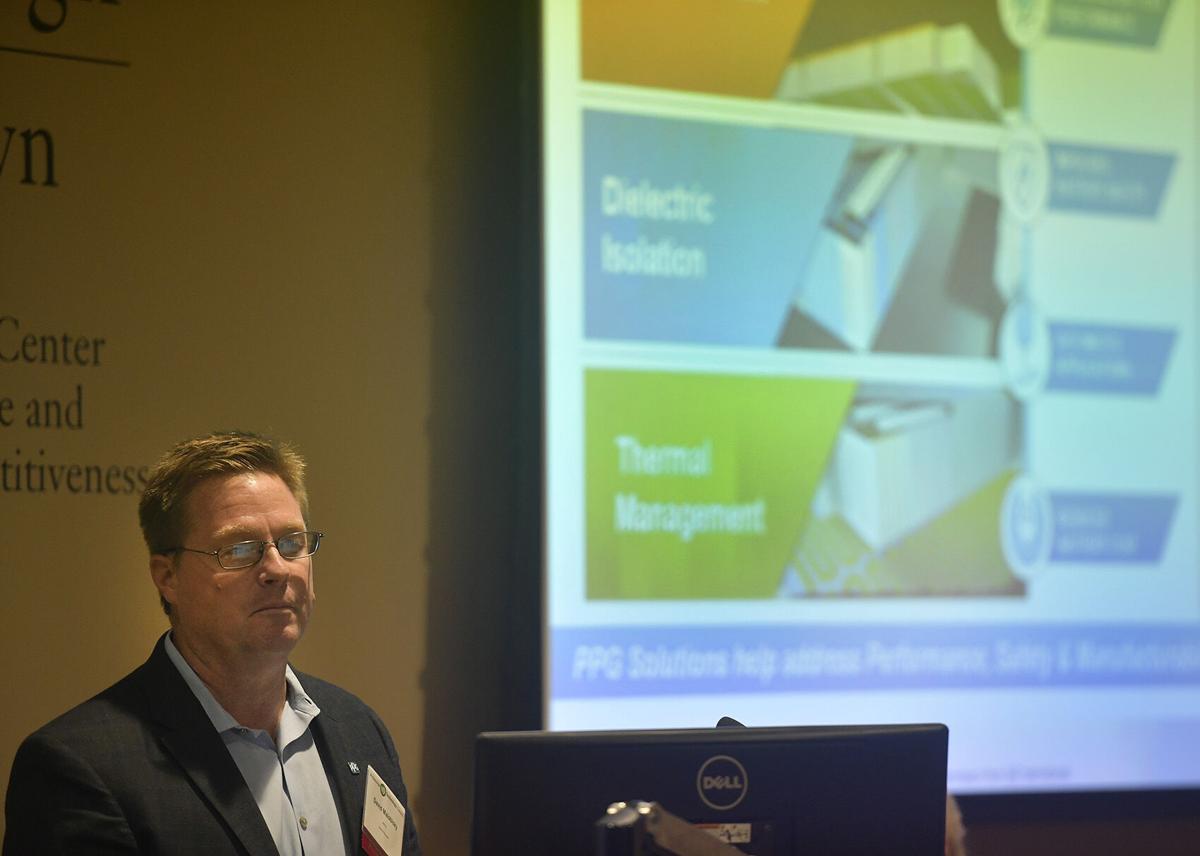 David Malobicky, general manager of Mobility Automotive OEM Coatings, gives insight to what is happening with electric vehicle batteries, during the Pittsburgh Technology Council seminar at UPJ on Thursday, Sept. 23, 2021. 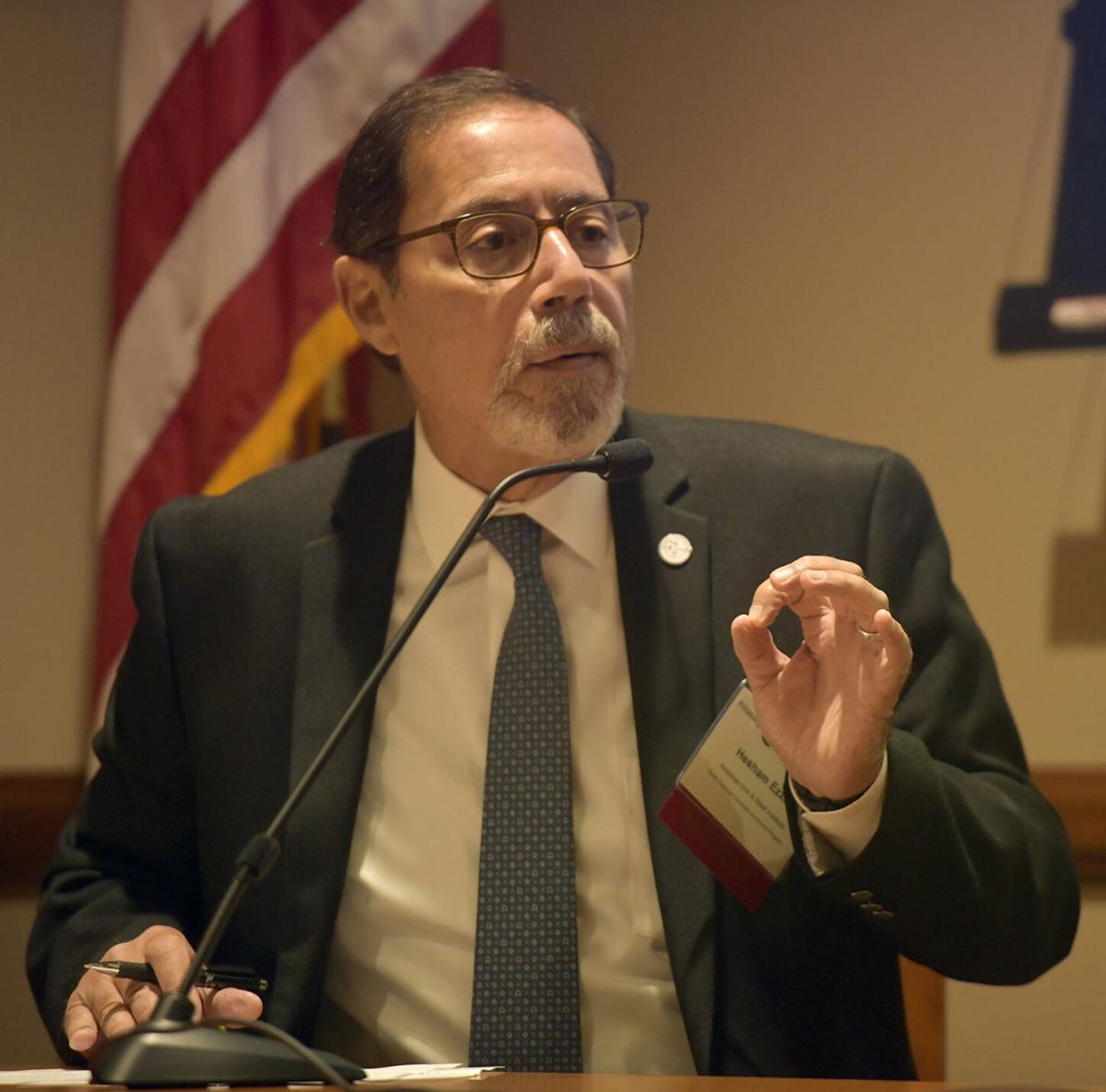 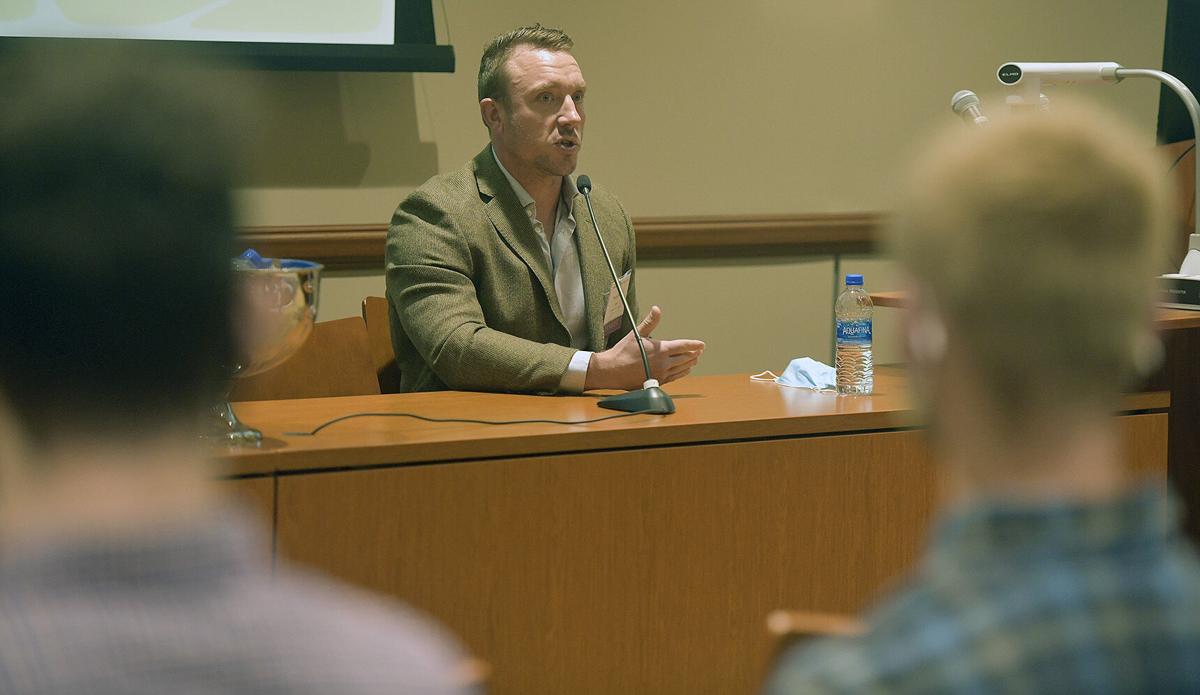 Trevor Walter, Vice-President of Petroleum Supply Management at Sheetz talks about the electric vehicle charge network that Sheetz has developed during the Pittsburgh Technology Council seminar at University of Pittsburgh at Johnstown on Thursday, Sept. 23, 2021.

David Malobicky, general manager of Mobility Automotive OEM Coatings, gives insight to what is happening with electric vehicle batteries, during the Pittsburgh Technology Council seminar at UPJ on Thursday, Sept. 23, 2021.

Trevor Walter, Vice-President of Petroleum Supply Management at Sheetz talks about the electric vehicle charge network that Sheetz has developed during the Pittsburgh Technology Council seminar at University of Pittsburgh at Johnstown on Thursday, Sept. 23, 2021.

JOHNSTOWN, Pa. – Trends in the automotive industry point to a future of self-driving, electrically powered vehicles, and Johnstown must prepare to be part of that emerging industry, said Ray Wrabley, Pitt-Johnstown professor and chairman of the division for enterprise and business.

In an event organized to showcase the region’s opportunities in the revolution of automobiles, the Pittsburgh Technology Council convened Thursday at Pitt-Johnstown’s John P. Murtha Center for Public Service. An array of panelists demonstrated the region’s foothold in the changing industry.

Among the few dozen people in the audience were leaders of two Johnstown software companies, Problem Solutions and Sourceree.

Problem Solutions President Mike Hruska said his company and many others in Johnstown have the potential to help meet the needs of the transforming auto industry.

But the work on autonomous and electric vehicles is hardly limited to software companies; it also plays into the region’s historical strengths of engineering and manufacturing, panelists said.

“We have a role to play in the world – post-industrial revolution,” Wrabley said. “We need to think about Johnstown as being part of that and not as a museum.”

“Steel’s role is to continue its historical engagement with automotive industry, and support the electrification of vehicles,” he said.

Multiple market research reports say autonomous highway mobile systems will be a $802 billion global market by 2025. Adding aerial, marine and defense autonomous systems, the total likely climbs above $1 trillion, according to a report from the Pittsburgh Technology Council.

Aurora, a self-driving car company, is rolling out a test of automated delivery trucks this week, said Matthew Blackburn, manager of government relations.

“It’s not an accident that it’s happening in Pennsylvania,” he said. He gave credit to the work of state Sen. Wayne Langerholc, R-Richland Township, who has authored legislation aimed to help electricity-powered freight trucks become more competitive. On the related trend of autonomous vehicles, he is working to make the testing of driverless vehicles legal in Pennsylvania, Blackburn said.

Aurora and its competitor, Argo AI, were founded by graduates of Carnegie Mellon University and the University of Pittsburgh, respectively. Both Pittsburgh companies highlighted the importance of the region’s universities in pushing the economy toward opportunities in the automotive industry.

But while economic opportunities are ripe, the exploration of self-driving vehicles comes with fear for people’s safety and the job security for tens of thousands of truckers in the state.

“The question of jobs comes up a lot,” Blackburn said. “But the reality is the biggest struggles in the trucking industry is finding drivers. It’s a tough job. You are away from your family for long periods of time. So we don’t think of autonomous trucks as replacing human drivers, because we are dealing with a shortage.”

On the topic of trusting artificial intelligence to take the wheel of a car, Argo AI’s local and state affairs lead, Liz Fishback, said it’s the status quo that is scary.

About 40,000 people in the United States die in car crashes every year, she said.

Blackburn agreed, saying the goal is for autonomous vehicles to make roads safer.

‘The time is now’

SAE International, formerly known as the Society of Automotive Engineers, has had buy-in from competing car manufacturers to cooperate on establishing standards for safety, said Frank Menchaca, vice president of growth at SAE.

“Major automakers including GM, Ford, Honda, and Aurora, have come together in a consortium to form standards,” he said. “The industry agrees to work together and not compete, for example, on figuring out what went wrong when an automated vehicle crashes.”

Some automakers have also made bold plans to do away with gasoline-fueled engines by 2030. By that time, a majority of vehicles on the road could be electrically powered or hybrids, Menchaca said.

Pittsburgh Technology Council President Aubrey Russo said the changes happening now to automobiles are the most profound since the Model T rolled off the assembly line. She urged universities, businesses and government leaders in Johnstown and Pittsburgh to be part of that change.

“Remember, the market is projected to reach a trillion dollars by 2025,” she said. “The time is now, and we can’t let the moment slip by.”