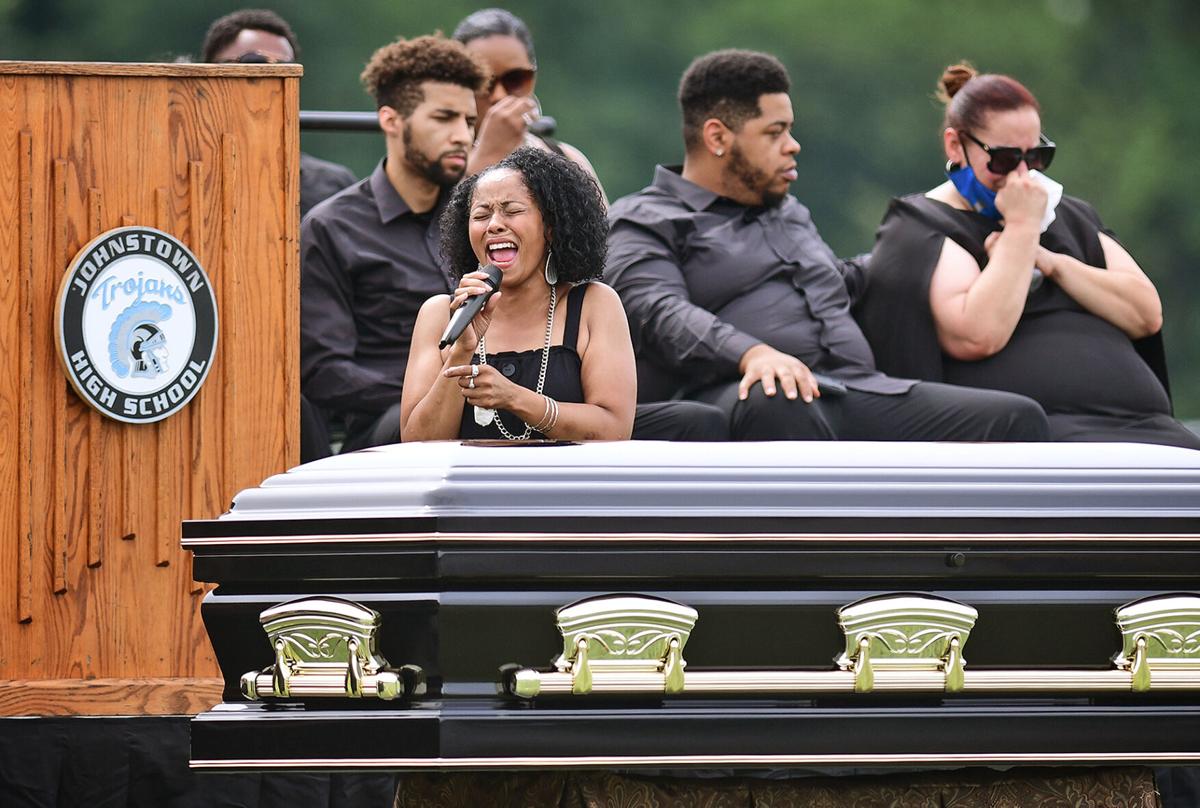 Following the Invocation, Sarina Hardison sings “My Eyes Are on the Sparrow” during Carlton Haselrig’s funeral service held at Greater Johnstown High School’s Trojan Stadium in Johnstown on Thursday, July 30, 2020. 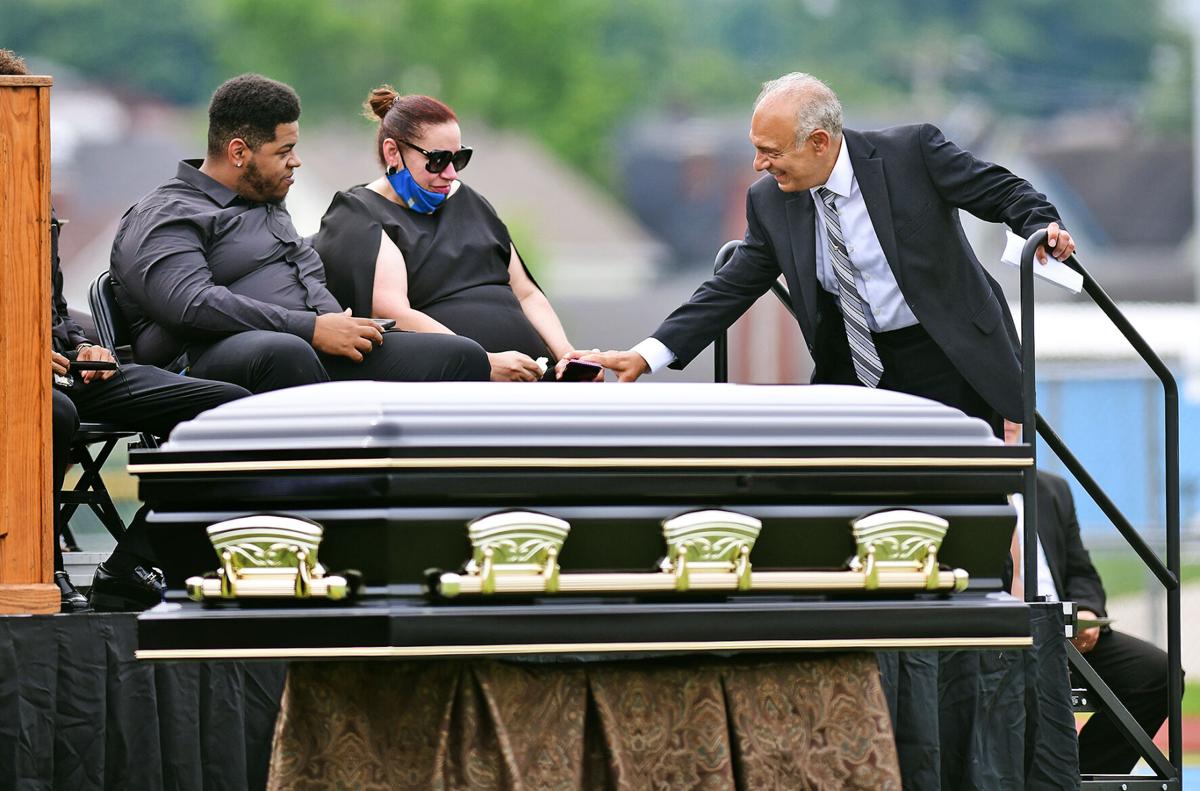 Pat Pecora, University of Pittsburgh at Johnstown wrestling coach, consoles Michelle Haselrig, wife of Carlton Haselrig, prior to addressing those in attendance at the funeral service held at Greater Johnstown High School’s Trojan Stadium in Johnstown on Thursday, July 30, 2020.

Following the Invocation, Sarina Hardison sings “My Eyes Are on the Sparrow” during Carlton Haselrig’s funeral service held at Greater Johnstown High School’s Trojan Stadium in Johnstown on Thursday, July 30, 2020.

Pat Pecora, University of Pittsburgh at Johnstown wrestling coach, consoles Michelle Haselrig, wife of Carlton Haselrig, prior to addressing those in attendance at the funeral service held at Greater Johnstown High School’s Trojan Stadium in Johnstown on Thursday, July 30, 2020.

In one of the most moving moments during a service celebrating the life of Johnstown sports icon Carlton Haselrig, his son C.J. told a gathering at Trojan Stadium about his hero.

“I never saw my dad like you all have seen him,” C.J. Haselrig said during Thursday's 90-minute service. “I just saw him as a father – no sports, no nothing. He was my best friend. It’s hard, but like he would say, ‘Man up.’ ”

C.J. Haselrig fought back tears as the crowd of nearly 200 people began clapping in support.

“I’ve known my dad for the best days. I knew my dad for the worst days,” C.J. Haselrig continued. “He loved me, man. I know that. I can live on through him. I’m eternally grateful for everything he’s taught me. You have a conversation, you could talk about anything and he’ll know. I was lucky to have a dad, a mentor and a hero all in one.”

A former Pittsburgh Steelers Pro Bowl lineman and six-time NCAA wrestling champion, Carlton Haselrig died on July 22 after a lengthy illness. He was 54.

Haselrig’s incredible story included mountainous peaks and deep valleys inside and outside of the athletic arena.

He earned a state wrestling championship as an independent competitor in 1984 because Greater Johnstown High School didn’t have a wrestling team.

‘I will not be denied’

Even though he didn't play college football, the Pittsburgh Steelers drafted Haselrig in the 12th round in 1989. He went from being on the NFL team’s practice squad to playing in the 1992 Pro Bowl.

His NFL career was derailed by off-field issues that Haselrig eventually worked through. He began a Mixed Martial Arts career in his 40s, which is unheard of in the physical and often brutal sport. Haselrig also coached youth as well as varsity football and wrestling in Johnstown.

“Carlton loved this school,” said former Greater Johnstown football head coach Tony Penna Jr., a close friend. “He bled the black and blue. He bled it through and through. There is no better place for him to be celebrated than these hallowed grounds – whether it is this turf, the practice field back there, or the cinder track.”

The statement drew a loud response from those in the crowd.

“This is where he deserves to be honored,” Penna said. “This is one of the things he lived for in addition to his family.”

Carlton Haselrig’s wife of 20 years, Michelle, and his uncle, Bruce Haselrig, a hall of fame wrestling official, were among those on the stage near the scoreboard at Trojan Stadium.

His wrestling coach at Pitt-Johnstown, Pat Pecora, talked about Carlton’s determination to earn a degree in communications.

“He worked very, very hard for that dream, and I’m proud of that,” Pecora said.

Carlton Haselrig won the Division II national title in 1987, a first for the Pitt-Johnstown program. The victory earned him a chance to wrestle in the even more prestigious Division I tournament with wrestlers from powerhouse programs such as University of Iowa, Oklahoma University and Penn State.

“We were in the hotel room that morning,” Pecora said of the championship match. “Carlton gets up first, takes a shower. I get up next and go in after he’s done to take a shower. The steam is on the mirror. He wrote in the steam, not for me to see but just to know, he said on this mirror, ‘I will not be denied.’ Words I will always remember.”

Pecora said Haselrig never was intimidated by his opponent's record or the reputation of the opposition’s school.

'Conclusion of the story'

The Rev. Clyde Williams Jr., of Pleasant Hill Baptist Church in Johnstown, provided a moving and often inspiring eulogy. Williams spoke about celebrating Haselrig’s life and how he “crossed the goal line,” and “scored a touchdown” while earning his “Super Bowl” victory through his faith.

Sarina Hardison performed two songs. In addition to Penna and Pecora, Alanna Wilson, sister of Michelle Haselrig, provided reflections on Carlton and Michelle’s life together. She talked about how the couple met as youngsters and reconnected to start a family that included nine children.

“In Johnstown, all of us, we didn’t have to watch TV for a superhero. We had a super hero,” Pecora said. “Carlton was Johnstown’s superhero.”

Penna and Greater Johnstown head wrestling coach Will Harris discussed the impact Haselrig had on their respective programs at Johnstown.

“We said, ‘He allowed us to be head coaches,’ ” said Penna, currently the Conemaugh Township High School football coach. “Carlton could be the head coach 10 times over. It just wasn’t his way.”

His way, especially in the recent years, was helping young student-athletes learn about their sport, education and life. His battle with substance and alcohol abuse that hurt his NFL career and his life in general, as well as his ability to move forward in a positive direction, made Haselrig a great teacher.

Chip Minemyer | A long-ago Haselrig interview, and the one that didn’t happen