Hall of Famer Bobby Hull, the Golden Jet, dies at 84 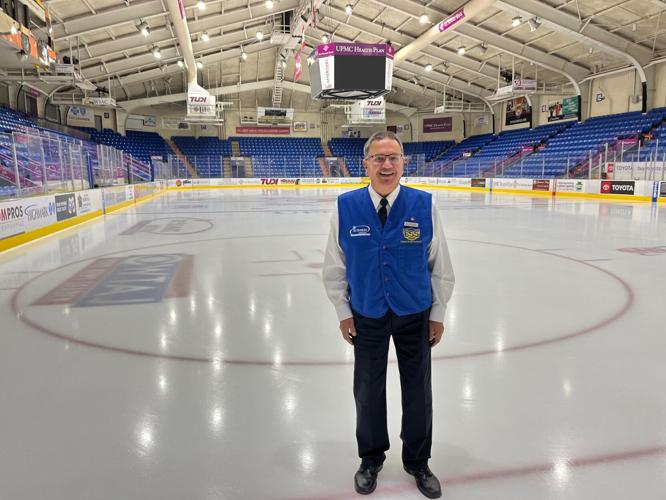 Dan Lovrich stands on the ice at 1st Summit Arena @ Cambria County War Memorial on Tuesday, Nov. 8, 2022. Lovrich will reach the milestone of working 50 years as an usher at the arena as the Johnstown Tomahawks play three games against the Danbury Jr. Hat Tricks from Thursday through Saturday. 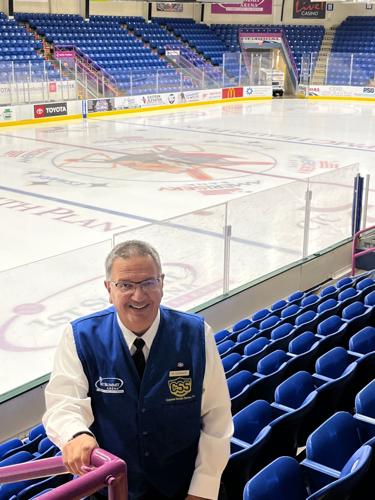 Dan Lovrich has worked as an usher at 1st Summit Arena @ Cambria County War Memorial for 50 years. Lovrich will reach the milestone this week as the Johnstown Tomahawks play three games against the Danbury Jr. Hat Tricks on Thursday through Saturday.

Dan Lovrich stands on the ice at 1st Summit Arena @ Cambria County War Memorial on Tuesday, Nov. 8, 2022. Lovrich will reach the milestone of working 50 years as an usher at the arena as the Johnstown Tomahawks play three games against the Danbury Jr. Hat Tricks from Thursday through Saturday.

Dan Lovrich has worked as an usher at 1st Summit Arena @ Cambria County War Memorial for 50 years. Lovrich will reach the milestone this week as the Johnstown Tomahawks play three games against the Danbury Jr. Hat Tricks on Thursday through Saturday.

As usual, Lovrich will be in the arena on Thursday night as the Johnstown Tomahawks play the Danbury Jr. Hat Tricks in the North American Hockey League.

On Saturday, it will mark almost exactly 50 years since Lovrich first clocked in at the arena.

“Friday the 13th, November 1972,” Lovrich said earlier this week. “I was a sophomore at Johnstown High School. It was the Conemaugh Township wrestling tournament that they used to hold at the War Memorial.

“That was the first event I worked. It was my first job,” Lovrich said. “What started out as a part-time high school gig turned into a 50-year stint, a dream job.”

Two years ago, Lovrich, now 65, retired after 44½ years at RDM Johnstown, but he continued working at his second job at the War Memorial.

Lovrich was there for the Johnstown Jets’ 1974-75 championship-clinching game. He worked security during the 1977 Paul Newman movie “Slap Shot,” which was filmed in Johnstown a year earlier.

The list of entertainers and rock ‘n’ roll acts Lovrich has seen in his role as an usher includes familiar names such as Kiss, Kenny Rogers, the Beach Boys, Kelly Clarkson and so many more.

Lovrich has always been there to assist spectators at the arena. He would help someone to their seat or steer him in the right direction to one of the concession stands or restrooms.

“I remember seeing Dan whenever I was attending events here as a teenager, back in the 1990s, and when I was playing hockey here for Richland High School in the 1990s,” said Chad Mearns, box office and marketing manager at 1st Summit Arena. “He’s been a familiar face since way back then.

“All these years later to have somebody have that level of loyalty and dedication to this building is really unparalleled and pretty amazing.”

The regulars who attended hockey games throughout the decades – the professional Jets, Wings, Red Wings and Chiefs or the junior-level Tomahawks – all seemed to know Lovrich.

He would often start conversations with fans. Sometimes he even chatted with players and coaches from the opposing team, whose locker room is situated near his traditional post in the concourse at the Section 5 concession stand.

“For much of my time running the Johnstown Chiefs, Dan was the head usher,” said former Chiefs goaltender, coach and General Manager Toby O’Brien, now the program director of Overspeed Hockey. “He was first-class. He always brought old-school professionalism and pride to his job.

“He was there to serve the fans and he took great pride in that he always treated everyone as a special person,” O’Brien said. “At the same time, he was a huge supporter and fan of all that was Johnstown, but he never showed favoritism if he was needed to help the visiting team.”

Lovrich said he truly appreciates the friendships he has made at the arena through the decades. He also thanked his current and former co-workers and bosses for giving a young kid an opportunity and then sticking with him over the course of 50 years of hockey, basketball, concerts and shows.

He noted that his coworker and friend Bert Rebar has been at the arena since it opened in 1950.

Of course, Lovrich also cherishes the memories the old building has provided for him.

“I was actually watching the back doors for the Jets championship game,” he said of Johnstown’s 6-2 win over the Binghamton Broome Dusters on May 1, 1975. “You always had to watch the doors at each end behind the goal cages for people sneaking in or going out.”

An announced crowd of 4,088 was in the building that night, although legend has it that even more fans attended.

“The atmosphere was unlike anything else,” Lovrich said. “When the Jets won, people were running onto the ice because the glass wasn’t as high back then. People were flooding onto the ice.”

The next year, when “Slap Shot” was filmed at the arena and sites throughout the region, the War Memorial ushers offered their uniforms to extras in the movie.

But the ushers weren’t totally left out of the action.

“We were contracted to work security for the movie,” Lovrich said. “We weren’t allowed to be in the movie. They used our old usher coats, the light brown with Kelly-green trim on the sleeves. Those were hideous.

“We went to Franklin Borough one night to the White Eagles Club,” he said. “They were doing the van scene over the hill in Franklin. We were given a ham dinner. Paul Newman popped down and sat next to me.”

Lovrich recalled a misunderstanding associated with the rock band Boston’s December 1978 concert that brought a crowd of 7,000 to the War Memorial.

“We were working security in the back by the doors for Boston,” Lovrich explained. “An older guy came and said he was there to pick up his son from the Boston Pops concert.

“Then, he heard the loud music and said, ‘What’s that?’ We told him it was Boston. He thought he was taking his son to the Boston Pops.”

From seemingly mundane moments to championship runs, Lovrich has seen plenty of action at the War Memorial.

“Every night, I take it as serious as I did the first night,” Lovrich said. “I’ve been fortunate to have friendships in the past and the present.”

Mearns isn’t surprised by the number of friends Lovrich has made.

“It’s been my experience that anybody who has had any kind of encounter with him, whether it be somebody on staff to any of the patrons or fans coming into the building, he’s one of those people everybody is always happy to be around,” Mearns said. “People always have a kind word to say about him.

“That’s kind of rare these days to find somebody that’s just universally liked and appreciated the way he is. It’s pretty special. We’re pretty happy to have him.”

Perhaps O’Brien best summed up how Lovrich became so well-known while working 50 years at a behind-the-scenes job at the arena.

“Dan epitomizes everything that is good about old-time American hospitality and pride in what you do,” O’Brien said. “A Cambria County War Memorial Arena icon.”

While not scoring on all of their clear-cut chances during their 4-1 win over the Danbury Jr. Hat Tricks, the Johnstown Tomahawks scored when the moments required them Thursday at 1st Summit Arena @ Cambria County War Memorial.