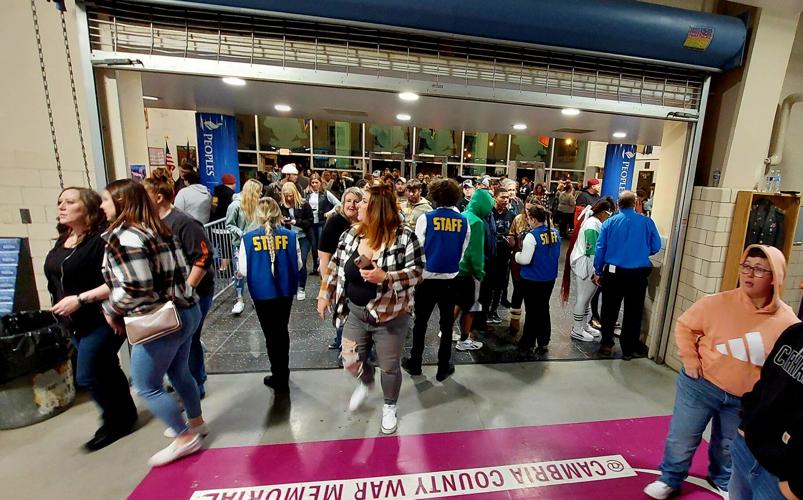 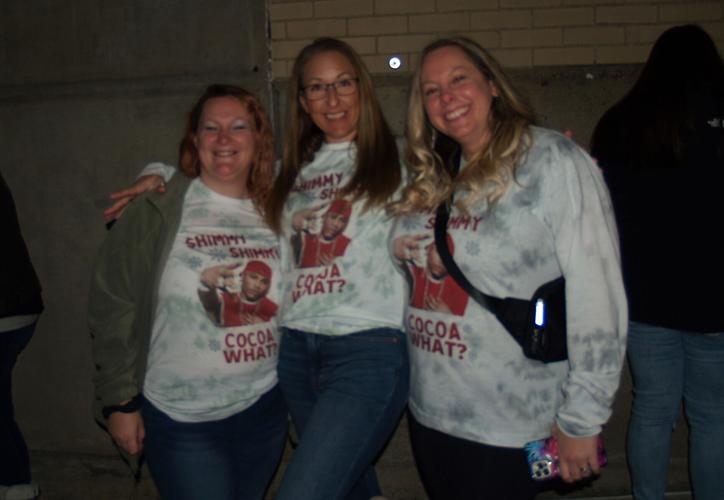 From left, Amber Martin, Sherry Leader and Jenny Ramsey, all of Maryland, show off their custom Nelly shirts prior to the rapper's Johnstown show on Saturday, Dec. 3, 2022, at 1st Summit Arena @ Cambria County War Memorial.

From left, Amber Martin, Sherry Leader and Jenny Ramsey, all of Maryland, show off their custom Nelly shirts prior to the rapper's Johnstown show on Saturday, Dec. 3, 2022, at 1st Summit Arena @ Cambria County War Memorial.

In fact, the Deep Creek, Maryland, woman and her fellow “baseball moms” were still waiting outside downtown Johnstown’s 1st Summit Arena @ Cambria County War Memorial on Saturday, but the lyrics emblazoned on their matching T-shirts – and their “had-to-have-’em” VIP tickets – said they were ready.

“When we found out about this, it was like, ‘OK, we’re going,’ ” said Amber Martin, also of Deep Creek.

“We left all of our kids at home with their dads,” added Jenny Ramsey, of Cumberland, Maryland, said, “so we could enjoy the nostalgia.”

The sellout crowd of an estimated 4,000 people was full of attendees in their mid-30s through 40s who were teenagers when the St. Louis rapper’s Midwestern twang became a signature hip-hop sound.

In the past 22 years, Nelly has literally charted “Over and Over,” along with hits such as “Hot in Herre” and “Ride Wit Me,” leading up to his latest crossover album, 2021’s “Heartland.”

“I was just a kid when I first heard his first hit album, and I still know every word,” said 33-year-old Josh Barber, of Johnstown, about an hour before the Ying Yang Twins kicked off the night.

He followed up with more than 30 songs that spanned his career, including “Tipsy,” “Batter Up” and “Air Force Ones” – mixing in covers of the late Biz Markie’s “Just a Friend” and Digital Underground’s classic “Humpty Dance.”

‘The music means something to them’

Nelly’s encore included “Dilemma” before he closed out the night with “Just a Dream.”

Afterward, he said “it means a lot” to look out into the crowd and see so many people moved by his music.

“They support because the music means something to them personally,” he said in a statement to The Tribune-Democrat, “and (it’s) always a good feeling to touch so many from so many place(s) for so long.”

Abby Cole, Nelly’s longtime tour manager, said Saturday’s Johnstown stop was part of a tour that has brought them to more than a dozen cities a month this fall.

Coming off a COVID-19 slowdown, the return to the stage has been a welcome one for Nelly and his crew, Cole said.

Apparently for his fans, too.

“It’s a good feeling,” Cole said of the sellout crowd in Johnstown – and other cities – along the tour. “After COVID, I think everybody’s ready to get back out and have fun again. They want to have a good time, and that’s what this is about.”

Burk and a group of friends rushed to buy tickets the day they went on sale, and she said they didn’t hesitate to drive the 45 minutes to Johnstown to see the show.

“Compared to what we usually have to do – driving to Pittsburgh, getting a room and an Uber while paying way too much for expensive beer – this is so much better,” Burk said.

The concert was one of several events taking place in downtown Johnstown on Saturday night.

The December evening also featured the 39th annual Festival of the Nativity at First Presbyterian Church and a festive Christmas Market in Central Park, which drew hundreds of attendees.

Look at what's happening in the region

Here’s what’s happening in the region beginning Thursday and continuing through Dec. 8: