Philadelphia District Attorney Larry Krasner talks about Republican-led efforts to investigate his record addressing crime and gun violence on the front steps of the Pennsylvania Capitol in Harrisburg on Friday, Oct. 21. 2022. Krasner said he believes lawmakers could be voting on an impeachment effort in the state House as early as next week. 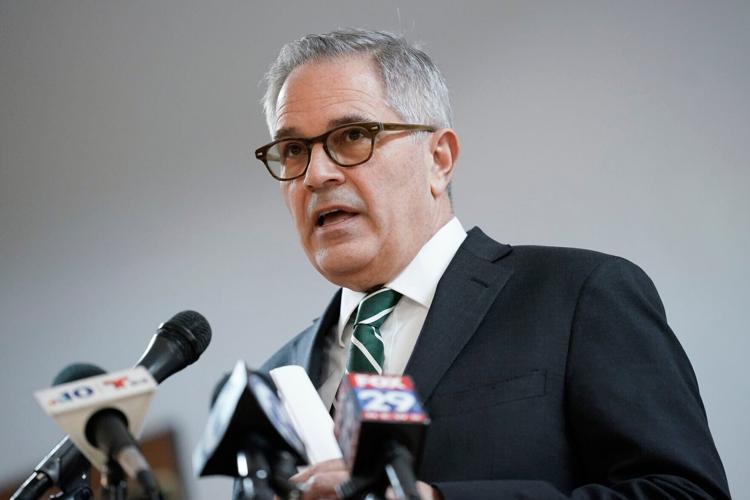 Philadelphia District Attorney Larry Krasner talks about Republican-led efforts to investigate his record addressing crime and gun violence on the front steps of the Pennsylvania Capitol in Harrisburg on Friday, Oct. 21. 2022. Krasner said he believes lawmakers could be voting on an impeachment effort in the state House as early as next week.

HARRISBURG, Pa. – Impeachment articles against Philadelphia District Attorney Larry Krasner will be presented to the Pennsylvania Senate next week, with a trial in the upper legislative chamber scheduled for January, according to the Senate Republican Caucus.

Senate President Pro Tempore Jake Corman will call state senators back to the Pennsylvania Capitol for two unplanned session days on Tuesday and Wednesday. Assuming the Republican majority will carry the votes to move forward, Krasner will have until Dec. 21 to formally answer to the charges.

A trial is tentatively slated to begin in the Senate at 11:30 a.m. Jan. 18, which falls in the next legislative session.

“The Senate’s Constitutional obligations are clear, so we are prepared to fulfill our duties and continue the impeachment process of Philadelphia District Attorney Larry Krasner next week,” Corman said in a press release.

House members voted 107-85 last week to impeach Krasner, alleging that his approach to mitigating violence and prosecuting crime in Philadelphia – an approach they say is failing the city – amounts to “misbehavior in public office,” an impeachable offense under the state constitution. He is not accused of committing a crime.

Removal from office requires a two-thirds majority vote of the 50-member state Senate. Republicans hold a voting majority of 28-22 in the next session. At least six Democrats would have to join all Republicans in finding Krasner guilty for the district attorney to be expelled.

Erica Clayton Wright, spokeswoman for Senate Republicans, explained that senators will consider two resolutions on Tuesday. One will set the rules of impeachment. The other will invite the team of House impeachment managers to present the articles of impeachment against Krasner.

Sen. Joe Pittman, the newly elected Senate majority leader, will put forward the resolution, which will be seconded by Sen. Lisa Baker, according to the Republican Caucus press release.

On Wednesday, the articles could be presented. Then senators would take an oath to uphold the state constitution and consider a third resolution to authorize a writ of summons formally notifying Krasner of the charges, Clayton Wright said.

The House is the only body authorized to impeach Krasner and elected officials in similar roles. The Senate must serve as judge and jury.

“It is a mandatory requirement/obligation for the Senate to take up the impeachment proceeding as outlined in the constitution,” Clayton Wright said.

There are few instances of impeachment in Pennsylvania history. Rolf Larsen, a justice on the Pennsylvania Supreme Court, was impeached in 1994. He had been convicted in a criminal court of two drug conspiracy charges. He also was accused of catering from the bench to friends and political donors.

Krasner held a news conference in Philadelphia this week, again denying the allegations against him and accusing Republicans of disenfranchising Philadelphia voters and advancing his potential removal on political grounds.

“In the hundreds of years the Commonwealth has existed, this is the only time the House has used the drastic remedy of impeachment of an elected official because they do not like their ideas,” Krasner said following the impeachment vote on Nov. 16.

“Those ideas are precisely why Philadelphia voters elected and reelected me to serve as the Philly DA – in two landslides,” he said.

State Rep. Tim Bonner has accused Philadelphia District Attorney Larry Krasner of putting himself “above the law,” and now the former prosecutor is being tasked by Republican House leadership to help prove it at an impeachment trial in the Senate.