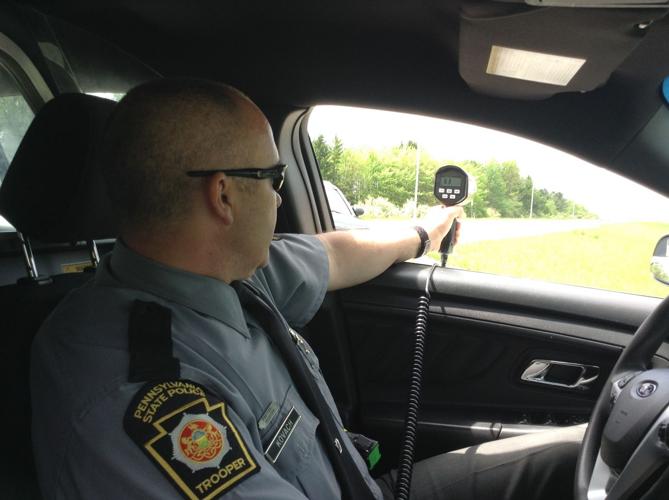 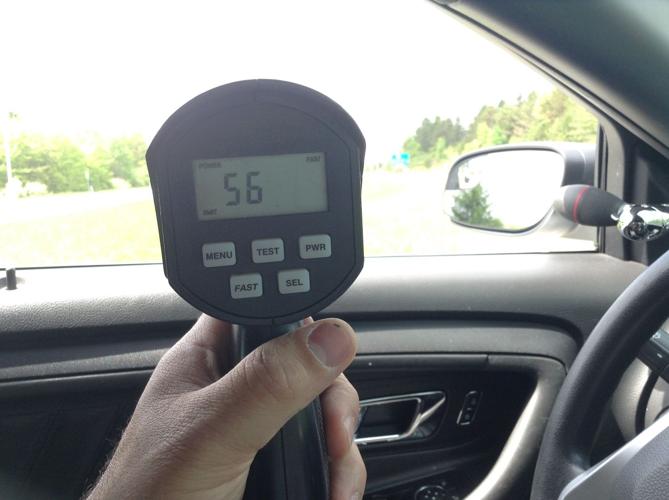 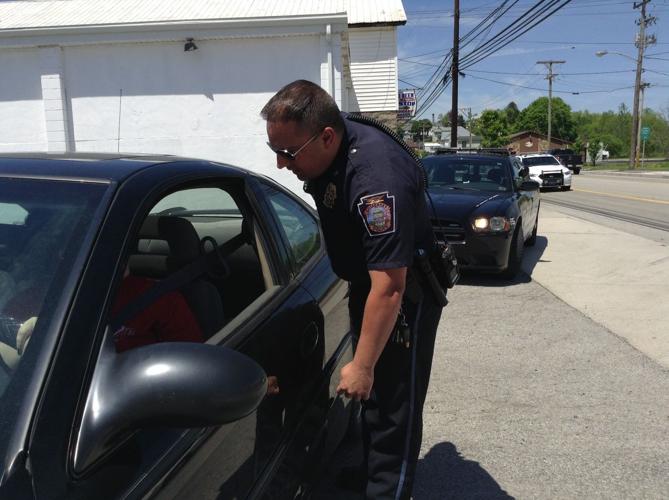 Somerset Borough Police Officer Scott Zelek stops a woman for speeding on May 14, 2015, in Somerset, Pa. 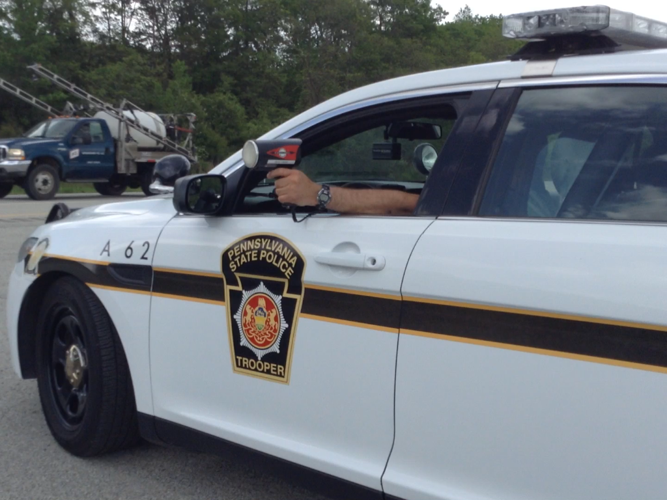 Somerset Borough Police Officer Scott Zelek stops a woman for speeding on May 14, 2015, in Somerset, Pa.

HARRISBURG – A long-standing ban on local radar enforcement could soon be in as much trouble as a speedster blowing past a police cruiser on the highway.

Momentum is building in Harrisburg to let local officers use radar, despite objections of the past. At least three proposals in the Legislature would expand the use of radar speed detection and retire Pennsylvania's status as the only state that doesn’t allow it.

Senate Majority Whip John Gordner, R-Columbia County, said he sees no reason to withhold the technology from local departments, given the appropriate safeguards.

Lawmakers may bar part-time police departments from using radar, or cap the amount of money a department can make on speeding tickets to discourage speed traps, he said.

Gordner was on the Senate Transportation Committee in 2011, when a bill to loosen rules for police use of radar was introduced but went no further.

He said some proposals to expand use of radar only make the tool available to police in state’s biggest cities, similar to the way the state has rolled out camera enforcement of traffic signals. Red-light camera technology is only allowed in Pittsburgh, Philadelphia and the southeastern Pennsylvania counties that surround the state’s biggest city.

Lawmakers long have been loathe to lift the radar ban, out of concern that cities and boroughs would use it to pad their coffers instead of making streets safer. State Police, by contrast, are allowed to use radar equipment for speed enforcement.

“I’ve no doubt that some would use it as a cash-grab,” said Sen. John Wozniak, D-Cambria County, who is the minority chairman of the Transportation Committee.

But Wozniak said he believes proposals can be “tweaked” to limit that type of abuse.

The benefit of improving safety, he said, outweighs concerns about speed traps.

In 2012, according to the National Highway Traffic Safety Administration, only Texas and California saw more people killed in speed-related crashes than Pennsylvania.

Some lawmakers who spent time as prosecutors or police officers are more vigorous advocates for the use of radar, said State College Police Chief Tom King, who is himself a leading proponent of expanding the use of the technology.

Those lawmakers include Sen. Randy Vulakovich, R-Allegheny County, who earlier this year introduced a measure to allow local departments to use radar. His legislation has 22 co-sponsors - just shy of the 26 that would demonstrate a clear majority of support in the Senate.

The proposal is gaining traction as some of the staunchest, most long-standing opponents to local radar use are no longer in office.

Those include former House Transportation Committee Chairman Rick Geist, R-Blair County, who wouldn’t move any bills to loosen rules for local speed enforcement, King said. Geist was voted out of office in 2012.

Dane Merryman, executive director of the Pennsylvania Chiefs of Police Association, said the group hopes to "debunk" the idea that local governments use speeding tickets to make money.

“Our interest is to promote traffic safety,” Merryman said.

In fact, an analysis by the Pennsylvania State Mayors Association and law enforcement groups shows the payroll cost of an officer outweighs the local revenue generated by a speeding ticket, unless the motorist is going 16 mph or more over the limit.

In those cases, a speeder is more likely to challenge the ticket in court, meaning that officers will have to put in more time, eating away at the cost-benefit for local departments.

Motorists paid $43 million in fines, court costs and fees tied to speeding tickets in Pennsylvania last year, according to the Administrative Office of Pennsylvania Courts.

That's close to the average reported in Shamokin Dam in Snyder County.

“We only get $18 per ticket,” said Mayor Joe McGranaghan. “It would be tough to balance our budget with that.”

A couple years ago, McGranaghan surveyed business owners to find out what they thought could be done to improve the borough. Almost half said they wanted more aggressive traffic enforcement on a stretch of Routes 11-15 that passes through the community, McGranaghan said.

Police officers there set up in a visible location because the main point is to slow traffic, he said. But if a driver doesn’t notice the cruiser, a ticket will follow.

McGranaghan said local police could set up a speed trap, if they wanted, with existing equipment.

“I think radar should be an option,” he said. “We give them guns, but we won’t give them radar?”

Without radar, police use systems such as the Electronic Non-Radar Device, which clocks how quickly a vehicle passes between a pair of infrared beams across a roadway.

Shamokin Dam police use that system, which works fine, though there are safety concerns, McGranaghan said. Officers using the system on the busy Routes 11-15 corridor must work alongside the busy highway - and cross it - to set up the equipment.

The radar issue is moot in many parts of the state because State Police, who are legally permitted to use the technology, patrol vast swathes of Pennsylvania that don't have local cops.

Two-thirds of the state’s 2,500 municipalities rely on State Police for protection, according to a study by the Center for Rural Pennsylvania.

On The Radar: Lots of bills, little traction

Here's a look at recent bills introduced in Pennsylvania that would have extended the use of radar to municipal police departments:

On The Radar: Pennsylvania local police use creative methods to catch speeders

Local police in Pennsylvania aren't allowed to use radar to detect speed, and Pennsylvania is the only state with that restriction.

On The Radar: Somerset Borough police say they're 'limited with VASCAR'

Law enforcement officials say VASCAR and ENRADD are effective - but are more burdensome than radar units state police are allowed to use in Pennsylvania.

On The Radar: Editorial — Time for Pennsylvania local police to join the radar club

The summer travel season will mean millions of people crisscrossing the Northeast, many ente…

On The Radar: MAP Area police discuss how they catch speeding drivers

On The Radar: Ohio police on Pennsylvania law: 'Why limit their authority to do their job?'

Modern radar devices are indispensable to speed limit enforcement and have strong potential to lead to unrelated criminal arrests, said Ohio state and local law enforcement officials who recently spoke to The Star-Beacon.

While Pennsylvania is the only state in the United States that prohibits municipal police from using radar, the West Virginia Governor’s Highway Safety Program provides funding for municipal police to help combat speeding.

On The Radar: Cambria County municipal police say it's about safety, not money

In Pennsylvania, state police have been using radar since 1962. Municipal police departments say they want it, too.