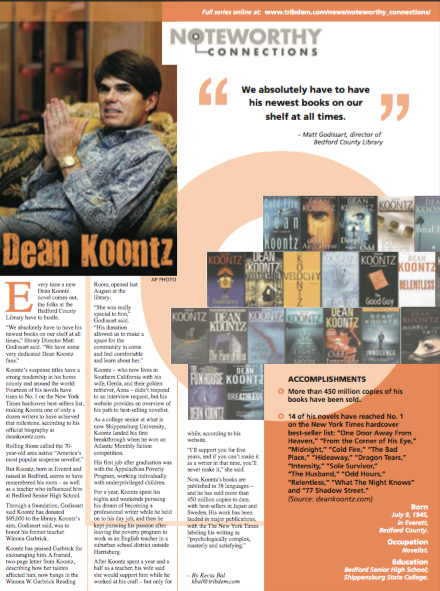 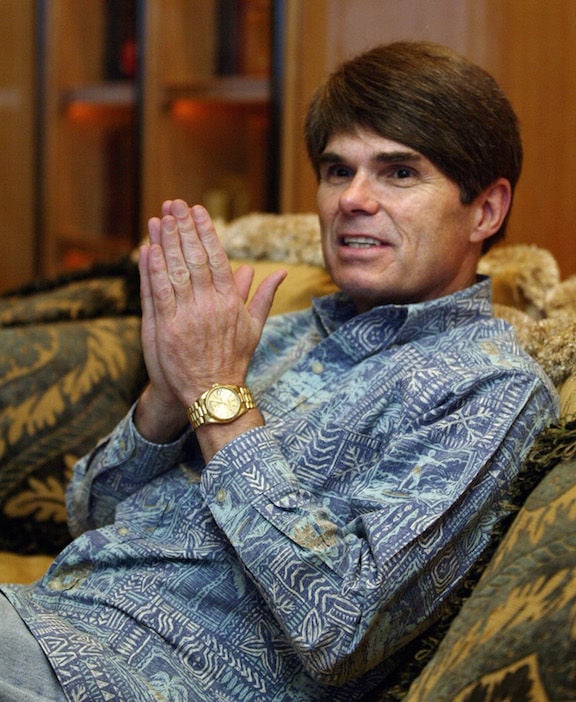 Author Dean Koontz poses at his home in Newport Beach, Calif., on Dec. 14, 2004. The best-selling writer is originally from Bedford, Pa.

Author Dean Koontz poses at his home in Newport Beach, Calif., on Dec. 14, 2004. The best-selling writer is originally from Bedford, Pa.

Every time a new Dean Koontz novel comes out, the folks at the Bedford County Library have to hustle.

“We absolutely have to have his newest books on our shelf at all times,” library Director Matt Godissart said. “We have some very dedicated Dean Koontz fans.”

Koontz’s suspense titles have a strong readership in his home county and around the world: Fourteen of his novels have risen to No. 1 on the New York Times hardcover bestseller list, one of only a dozen writers to have achieved that milestone, according to his official biography at deankoontz.com.

According to Rolling Stone, the 70-year-old area native is “America’s most popular suspense novelist.”

But Koontz, born in Everett and raised in Bedford, seems to have remembered his roots – as well as a teacher who influenced him at Bedford Senior High School.

Through a foundation, Godissart said, Koontz has donated $95,000 to the library. Koontz’s aim, Godissart said, was to honor his former teacher Winona Garbrick. Koontz has praised Garbrick for encouraging him. A framed, two-page letter from Koontz, describing how her talents affected him, now hangs in the Winona W. Garbrick Reading Room, opened last August at the library.

“She was really special to him,” Godissart said. “His donation allowed us to make a space for the community to come and feel comfortable and learn about her.”

Koontz – who now lives in Southern California with his wife, Gerda, their golden retriever, Anna – didn’t respond to an interview request, but his website provides an overview of his path to bestselling novelist.

As a college senior at what is now Shippensburg University, Koontz landed his first breakthrough when he won an Atlantic Monthly fiction competition.

His first job after graduation was with the Appalachian Poverty Program, working individually with underprivileged children. For a year, Koontz spent his nights and weekends pursuing his dream of becoming a professional writer while he held onto his day job, and then he kept pursuing his passion after leaving the poverty program to work as an English teacher in a suburban school district outside Harrisburg.

After a year and a half as a teacher, his wife said she would support him while he worked at his craft – but only for while, according to his website bio.

“I’ll support you for five years, and if you can’t make it as a writer in that time, you’ll never make it,” she said in the bio.

Now, Koontz’ books are published in 38 languages – and he has sold more than 450 million copies to date, with bestsellers in Japan and Sweden. His work has been lauded in major publications, with the The New York Times labeling his writing as “psychologically complex, masterly and satisfying.”

“We absolutely have to have his newest books on our shelf at all times.” – Matt Godissart, director of Bedford County Library

• Accomplishments: More than 450 million copies of his books have been sold, and 14 of his novels have reached No. 1 on the New York Times hardcover bestseller list: "One Door Away From Heaven," "From the Corner of His Eye," "Midnight," "Cold Fire," "The Bad Place," "Hideaway," "Dragon Tears," "Intensity," "Sole Survivor," "The Husband," "Odd Hours," "Relentless," "What The Night Knows" and "77 Shadow Street." (Source: deankoontz.com)

Tommy Turk got his start playing area polka bands as a teenager, and became one of the most popular trombonists in the United States.

Charles M. Schwab rose from the halls of St. Francis College to become a wealthy captain of industry in the early 20th Century before seeing h…

Russell Shorto is – in all likelihood – the only person from the Johnstown area to ever have been knighted.

Back in the early 1950s, a new uptempo form of rhythm and blues music started to gain crossover appeal among teenagers.

But Alan Freed, a disk jockey on Cleveland radio station WJW and a native of Windber, started calling the sound “rock 'n' roll.” The description, which was already a well-known euphemism for having sex, captured the spirit of the sound and took off.

A lover of comic books and horror movies, director Chris Columbus knew his dream career path after watching “The Godfather” when he was only 15 years old – turn words on the page into movie magic.

Within a decade, Joey Covington went from playing Johnstown-area VFW crowds to getting a seat on board Jefferson Airplane, a pioneering psychedelic rock group just months removed from headlining Woodstock.

When he spoke at the University of Pittsburgh at Johnstown in the fall of 2015, Richard Verma – the 25th U.S. ambassador to India – shared stories of sweeping U.S. initiatives in India.

Carroll Baker made a name for herself in Hollywood as a voluptuous blonde bombshell.

As a youth, D.C. Cooper played in several bands throughout the Johnstown-Pittsburgh club circuit. Now as the lead vocalist for Royal Hunt, he performs around the world for the masses.

Edgar Cortright grew up in Hastings, where his father, a World War I veteran, was one of the owners of Hastings Fuel Co. The family eventually moved to the Philadelphia area when Cortright was 10 years old.