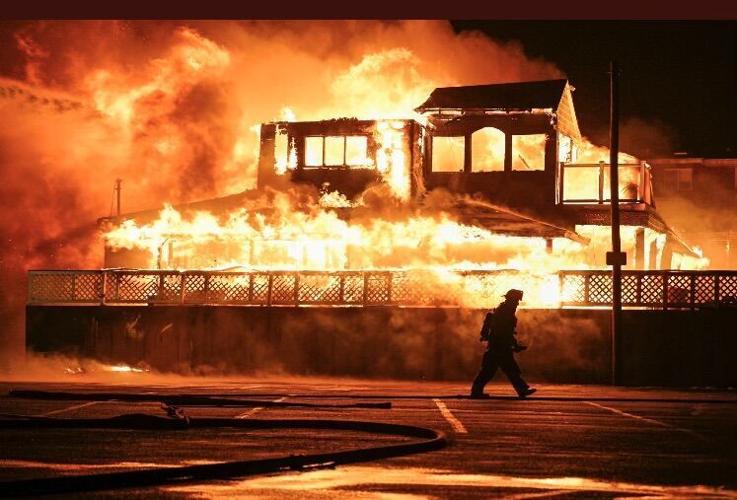 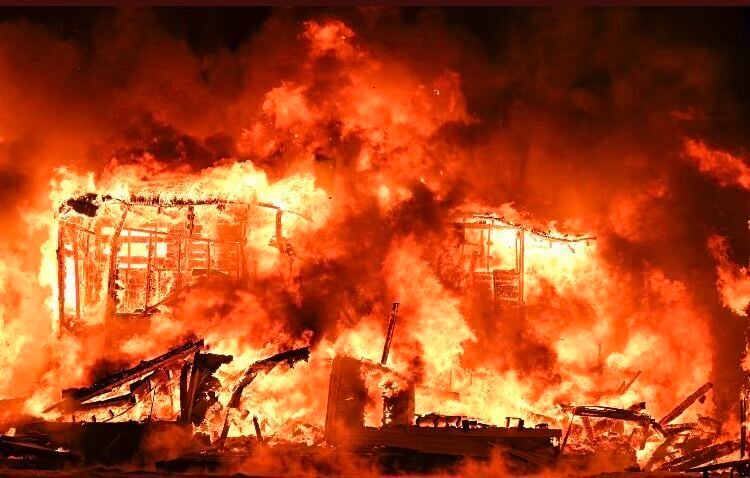 Flames from Salisbury, Massachusetts, fire crumble the walls of a motel in the seaside community.

Flames from Salisbury, Massachusetts, fire crumble the walls of a motel in the seaside community.

SALISBURY, Mass. – A raging fire fed by 30 mile per hour storm winds swept through an ocean-side motel, an apartment building and three homes in this Massachusetts beach town early Monday.

Miraculously, the State Fire Marshal’s Office said, there were no apparent deaths or injuries.

The nine-alarm fire broke out at Michael’s Oceanfront Motel around 1:45 a.m. and the leaping flames quickly spread to the other buildings, officials said.

Officials said only two tenets occupied the motel, which is normally bustling with summer visitors. It is used for short-term rentals in the off-season.

Salisbury Fire Chief Scott Carrigan said the blaze destroyed the motel, a 12-unit apartment building and the three homes. He said some other nearby homes suffered smoke and heat damage.

“The buildings were completely consumed within a very short amount of time,” he said. “It seemed like minutes because of the winds” – which gusted up to 30 miles per hour from  the ocean.

More than 100 firefighters from Salisbury and nearby communities in Massachusetts and New Hampshire labored for eight hours to put out the fire. Salisbury is a small coastal town 40 miles northeast of Boston on the New Hampshire border. The strong winds and occasional rain hindered firefighters.

“We had hurricane-force winds,” Salisbury Fire Capt. Andrew Murphy. “We did everything we could do.”

Chief Carrigan said a State Department of Transportation employee first observed smoke and flames coming from the motel around 1:45 a.m. and called 9-1-1. Local firefighters arrived on the scene within minutes. He did not identify the employee.

Dan Kelley, who lives near the motel, said the sound of sirens and loud popping from the fire woke him at roughly 2 a.m. “The fire was fully involved,” he said. “It was raining embers … a lot of shingles flying through the air.”

The Red Cross and the Salvation Army assisted residents displaced by the fire.