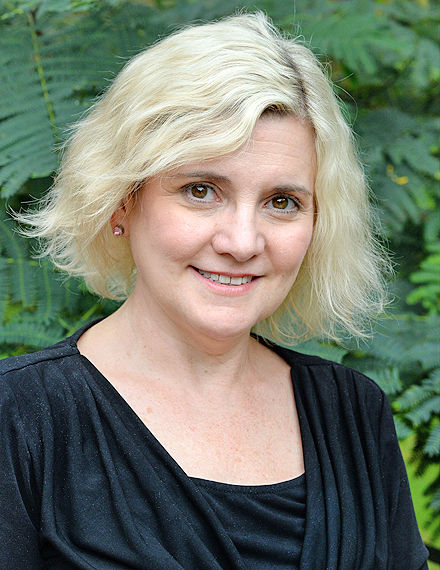 When Cheryl Bush was told she had breast cancer, her initial reaction was not one of fear but how she could go about taking care of it.

“It’s not a death sentence; you have to have a positive outlook and don’t panic,” the 52-year-old said.

“I wanted to get as much information about it as possible.”

The Stonycreek Township, Somerset County, resident said in August 2018 she had an irregular mammogram that raised a red flag with Dr. Patti Stefanick.

“This was the second high risk mammogram I had, I had another in August 2017, but Dr. Stefanick said it wasn’t cancer and she was underwhelmed by the mass,” Bush said.

“In 2018, she told me it was close to my chest wall and she wanted to remove it, so I had an excisional breast biopsy in October.”

A week later, she received a call that it was in fact breast cancer.

“It was a hormone receptor positive cancer,” Bush said. “We did some bone and lung scans to see if it had spread and it hadn’t, but she also wanted to look at the sentinel lymph nodes and do a biopsy. There were some isolated cells in the lymph nodes, so then it was a matter of finding a team for continued care.”

The pre-kindergarten through 12th grade vocal music teacher in the Shanksville-Stonycreek School District said she wanted to stay local for treatments, but also wanted a second opinion.

“I called Magee-Womens Hospital and asked who they recommend in the Allegheny Health Network and I was given Dr. Jane Raymond’s number at Allegheny General Hospital,” Bush said.

“I went to see her and we did an oncotype test where they look at the genomes to see the likelihood of this recurring.”

The score came back low so it was decided that chemotherapy wasn’t needed, instead she proceeded with radiation treatments beginning in December at Somerset Oncology Center.

“I went through 20 treatments and finished in January this year,” Bush said.

Today, she has to go every few months for blood work and has diagnostic mammograms more frequently to ensure no changes have occurred.

“I have to take Arimidex for the next five years and there are some side effects, but I’d rather have that than the side effects of chemotherapy,” Bush said.

She credits her father and husband, Brandon, along with friends, colleagues and neighbors as her support system.

“They have been amazing to me,” Bush said.

“My neighbors were amazing and I didn’t expect that, and it made me feel so much better. The American Cancer Society has some great people who can help and answer questions for you and that was helpful to me, too.”

Her advice to other women is to get their yearly mammograms because early detection is key.

“Screening is everything and can really help find things – I didn’t feel anything and you’re not always going to see symptoms – but these things can find something before it becomes trouble,” Bush said.

“Find it early, follow the treatments and get rid of it.”

Operation Pink Lobster: Through Sunday, Red Lobster at 525 Galleria Drive in Johnstown and 3330 Pleasant Valley Blvd. in Altoona. Throughout the week, both locations will collect donations using pink boots and sell pink paper boots to post in the lobby of the restaurants. All donations benefit Joyce Murtha Breast Care Center at Chan Soon-Shiong Medical Center at Windber.

Windber Pink Out: The Ramblers have worn pink socks for football along with wristbands, tape and gloves. The pink-out game will be Friday against Blacklick Valley. All sports are encouraged to participate in the special week through Saturday to wear pink in support of breast cancer awareness.

Ferndale Pink Out: The Yellow Jackets’ pink-out events are sponsored by the varsity cheerleaders, who sell T-shirts in advance, have a bake sale at the game, and sell pink items to raise money for the Joyce Murtha Breast Care Center at Chan Soon-Shiong Medical Center at Windber. The football game will be on Saturday against Shade, with the players wearing pink items on the field, and the other school is invited to join them in wearing pink.

Westmont Hilltop Pink Out: The Hilltoppers will play their pink-out game on Saturday against Greater Johnstown. The football players don’t wear pink items, but do participate in all the activities. Cheerleaders and fans are encouraged to wear pink that day.

Central Cambria Pink Out: The school has decided to have one pink-out shirt for the entire district with each sport (fall, winter, spring) having its own pink-out night/event. Football’s night is Oct. 18 against Bishop McCort.

Penn Cambria Pink Out: Activities are set for Oct. 18, when the Panthers host Richland.

Meyersdale Pink Out: On Oct. 18, with North Star on the schedule, the Red Raiders will celebrate “Beat Cancer Night.”

When Katelyn McClain, 28, was diagnosed with breast cancer in 2018, her thoughts immediately became less about herself and more about her 3-ye…

William, III 40, Johnstown. Friends received from 1 until time of Memorial Service at 2PM Thursday at Henderson Funeral Home-East Hills, 2503 Bedford St. Complete obituary can be viewed and memorial contributions can be made at www.hendersonfuneralhome.com