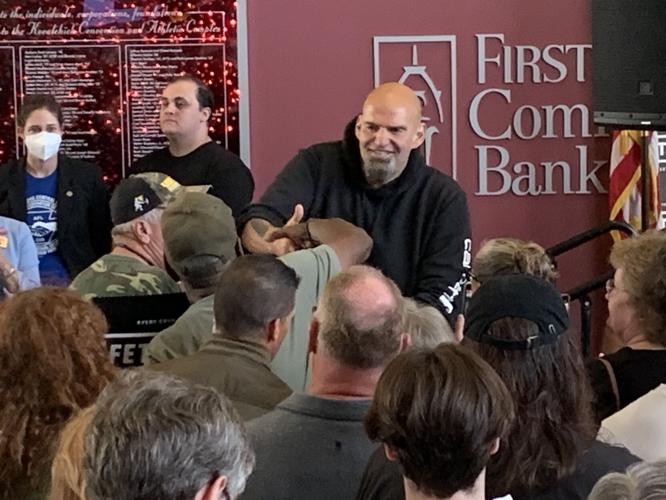 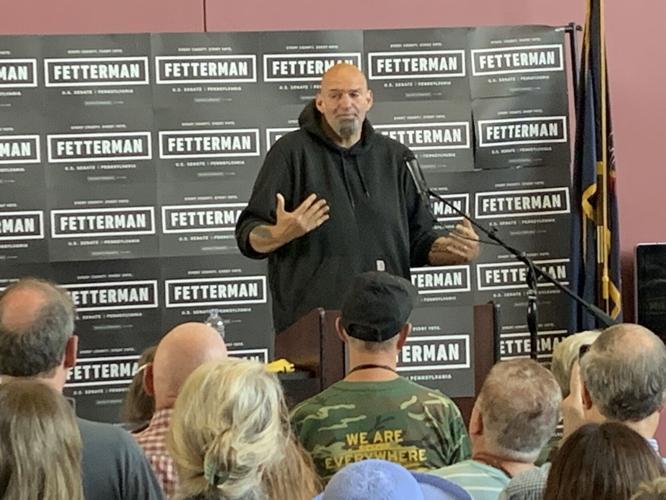 INDIANA, Pa. – Campaigning Tuesday at Indiana University of Pennsylvania, Democratic nominee for U.S. Senate Lt. Gov. John Fetterman asked a group of about 500 supporters if they had ever faced a medical challenge in their lives, or if they had parents, grandparents or children who did.

“Most of the hands come up,” Fetterman said when speaking inside the Kovalchick Convention and Athletic Complex lobby.

Fetterman then discussed his own experience after suffering a stroke earlier this year that required him to take time off from holding public events.

In response, the campaign of his opponent, Dr. Mehmet Oz, a Republican, issued a somewhat sarcastic statement in which it listed concessions the candidate would be willing to make if Fetterman agreed to a debate, including that “We will pay for any additional medical personnel he might need to have on standby.”

An Oz staffer also said, “If John Fetterman had ever eaten a vegetable in his life, then maybe he wouldn’t have had a major stroke and wouldn’t be in the position of having to lie about it constantly.”

Dante Zottoli, an IUP student, said he is not concerned about Fetterman’s health, comparing him to President Franklin Delano Roosevelt, who suffered from polio.

Zottoli said Fetterman is “morally one of the healthiest politicians in America.”

Fetterman addressed the audience for less than 10 minutes, an unusually short time for a campaign speech, and did not do press interviews afterward.

He has agreed to one debate with Oz, asking to be allowed to use closed captioning due to stroke-related hearing issues.

Republicans have focused much of their attention on Fetterman’s health in recent weeks.

“Fetterman cannot have it both ways anymore,” Brittany Yanick, communications director with Dr. Oz for Senate, said in an email comment. “If he is able to speak in front of large crowds, he’s either healthy enough to debate and wants to hide his radical record, or he’s lying about his health. He needs to be honest and transparent with Pennsylvanians.”

“John Fetterman says that he is in good health, but won’t be transparent,” Kulback said. “Team Fetterman won’t release his medical records or make his doctors available for interviews. Fetterman took two cognitive tests, but won’t release the full results. Fetterman has only held a handful of campaign events and only agreed to pre-taped interviews with friendly reporters – but claims he is able to hold a ‘normal’ campaign schedule.”

Much of Fetterman’s speech focused on Oz, including the doctor’s opposition to abortion rights.

“Dr. Oz might be a joke, but it’s not funny because abortion is at stake,” Fetterman said. “Dr. Oz has said that every abortion is a murder. That means every woman that chose an abortion, it would make them a killer in his mind.”

Fetterman said he was in heavily Republican Indiana County because “every county, every vote” is “the kind of campaign that we’ve always run.”

“John is from here,” Smith said. “He’s been here. He’s raised his family here. He’s seen the struggles and successes of everyday Pennsylvanians. John knows us because he shows up everywhere. No matter if we’re a bright blue Democratic city or in a red county like Indiana, you can count on John to show up and defend our rights.

Along with Smith, Fetterman was supported by several other speakers, including second lady of Pennsylvania Gisele Barreto Fetterman, who said her husband “stands on the right side of history, even when he’s standing alone.”

Sam Bigham, president of Indiana University of Pennsylvania’s Democrats, said he wants elected officials, such as Fetterman who show “compassion."

Bigham said: “We need senators who will fight for us every single day and who have the courage to not back down from a challenge."

Rachel Sternfeld, president of the Indiana- Armstrong Central Labor Council, described Fetterman as “someone who fights to make lives better.”