Alex Vessey, a Patton native, has fond memories and lasting friendships from his time as a Boy Scout – especially the thrill of outdoor survival skills he picked up while camping at properties like Camp Seph Mack in Penn Run.

“It’s where I met a lot of friends I still talk to, even after scouting,” said Vessey, 20, who works as a raft guide in Ohiopyle when he’s not in college at Penn State. “It’s also where I learned a lot of skills that have translated into hobbies and sports and things like that, things I wasn’t introduced to anywhere else.”

But Camp Seph Mack is among a list of Laurel Highlands Council camps that the organization’s leaders are considering closing as they consider better managing the cost of owning and operating 12 properties and three service centers.

A February report suggests closing and vacating some Laurel Highlands Council of Boy Scouts of America camps or facilities and making changes at others, including pushing more Scout activities, such as “Cub World,” to Camp Baker near Pittsburgh. The Penn’s Woods Council, which includes troops in Cambria and Somerset counties, merged with the Greater Pittsburgh Council in 2011. 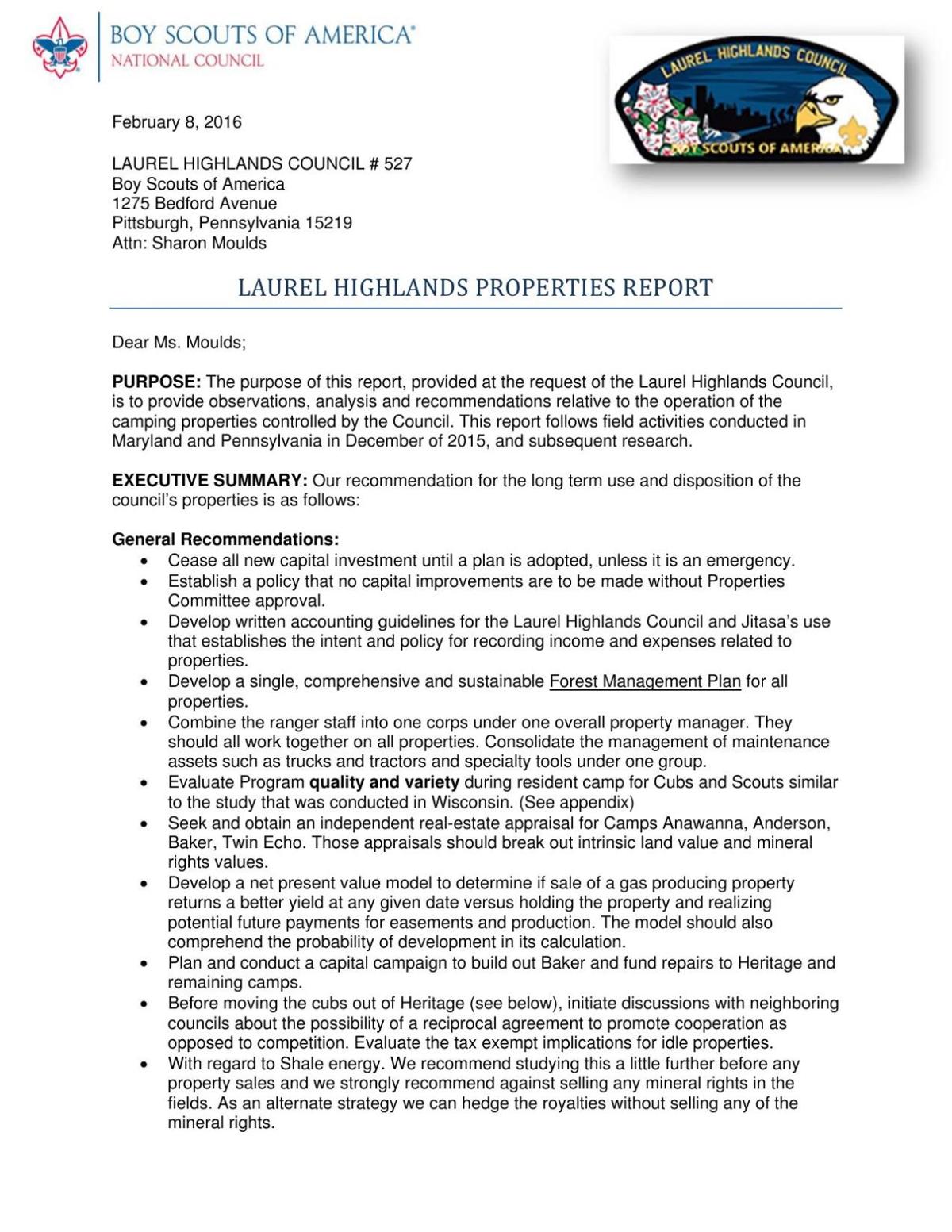 Vessey said he worries that the sense of wildness could be lost if camp activities are consolidated.

“If you’re trying to pack 1,100 or 1,200 boys into just one camp, you lose that sense of community and also sort of the sense of the wilderness,” he said.

“It’s not the same as going to a small camp where you’re more set back from other troops.”

The report also suggests stopping all capital investments and improvements until a plan is adopted. Selling mineral rights could be explored further, the report said, and lumber harvesting has helped balance the costs – though those still outweigh revenues.

Camps that are recommended to be closed and sold are: Camp Anderson (Tyrone) and Camp Potomac (Oldtown, Maryland). The report also suggests canceling a lease with the state at Camp Seph Mack (Penn Run) and vacating the property. Camp Anawanna (Amity) is recommended to be closed to Scouting and held as an investment. The report also recommends turning Putts Campground (Saxton, Huntingdon County) over to the a local troop and to stop using it as a long-term camp for the Boy Scout organization.

Those camps ranked lowest in a scoring system an evaluation team used, which took into account 17 criteria – measures like financial stability, demographics, markets and camping use – as well as whether they had potential for a financial boost from Marcellus or Utica gas rights.

At the same time, the council is struggling financially to support 12 properties, even considering natural resource revenue.

The report also suggests vacating the lease for an Ebensburg service center and moving to a smaller storefront with better accessibility.

A receptionist at the Ebensburg service center said all comments would have to come from the Pittsburgh headquarters.

Sharon Moulds, Scout executive for the Laurel Highlands Council, sent a statement on the potential changes, saying the report is the first phase in a camping and property assessment, part of a long-range strategic plan.

“As a result, the committee recommended to the council’s board of directors that ownership or lease of some properties be modified and their use further evaluated until a determination can be made relative to their long-term sustainability and disposition,” she said.

“This will be done with members of the committee and some outside experts,” she said. “This part of the plan will take time.

“Moreover, the summer camping season will also provide additional evaluation opportunities. Subsequently, a year-round camping plan must be developed and recommended for board approval.”

Updates are to be provided on the council’s website, lhc-bsa.org, on a “properties” tab. Feedback and concerns can be emailed to properties@lhc-bsa.org, Moulds said.

“The Laurel Highlands Council is dedicated to providing world-class facilities and programs to all our youth, today and in the future,” she said.

“That is what all of this is about. While we understand the concerns from volunteers and others in our council’s footprint, it remains true that we are all working to develop the best possible outcome for the best and highest use of our council properties for the benefit of youth.”