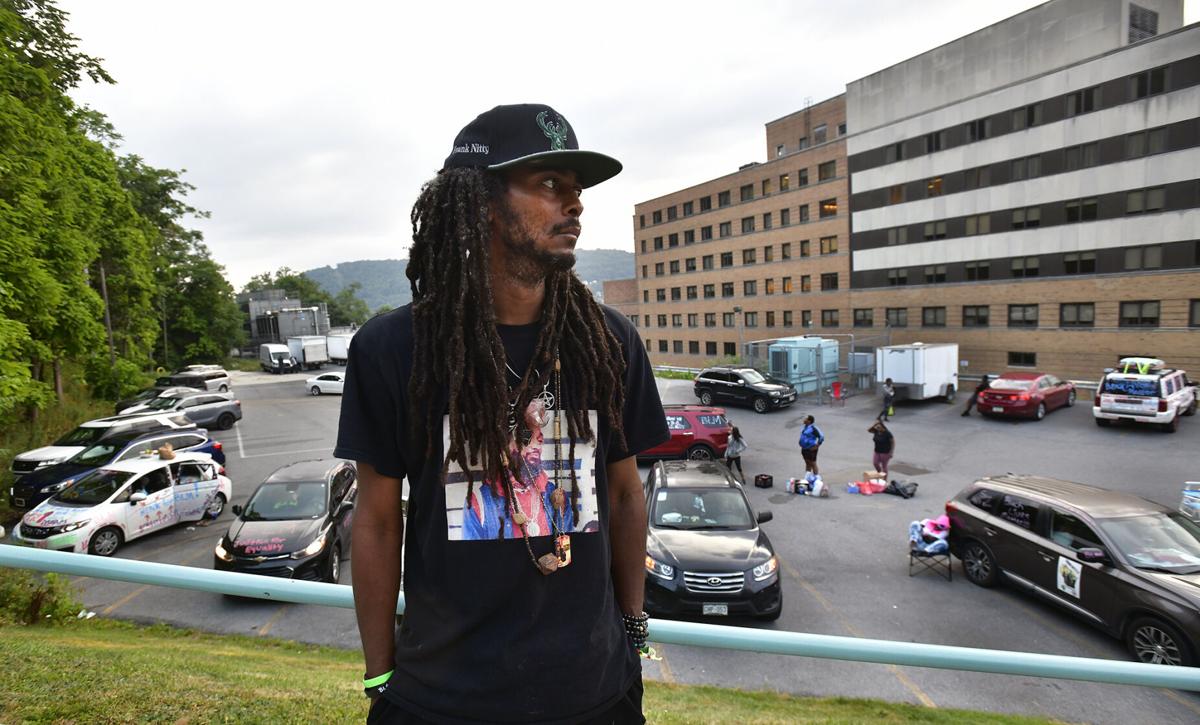 Frank "Nitty" Sensabaugh, leader of a March on Washington 2020 group from Milwaukee, Wisconsin, waits for news on a friend outside of Conemaugh Memorial Medical Center emergency room on Tuesday, August 25, 2020. The group was marching from Milwaukee to Washington D.C. and was traveling along Route 30 Monday night, when they encountered a man who they say shot one of their members. 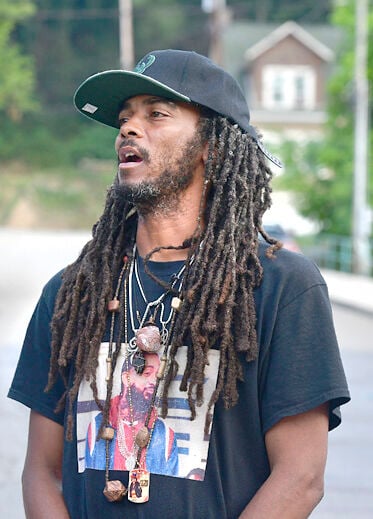 Black Lives Matter group leader Frank “Nitty” Sensabaugh has been leading a series of protests since the death of George Floyd on May 25.

Frank "Nitty" Sensabaugh, leader of a March on Washington 2020 group from Milwaukee, Wisconsin, waits for news on a friend outside of Conemaugh Memorial Medical Center emergency room on Tuesday, August 25, 2020. The group was marching from Milwaukee to Washington D.C. and was traveling along Route 30 Monday night, when they encountered a man who they say shot one of their members.

Black Lives Matter group leader Frank “Nitty” Sensabaugh has been leading a series of protests since the death of George Floyd on May 25.

Frank “Nitty” Sensabaugh’s quest for racial equality started long before he and at least 40 fellow activists began a march from Wisconsin to Washington, D.C., that brought them through this region.

Sensabaugh’s group had a member shot this week during one of at least two confrontations while moving through Bedford County.

He has become a public face of a Milwaukee movement that has targeted justice, police reform and change in recent years.

That Black Lives Matter-related mission has continued on an almost daily basis since George Floyd’s death on May 25, reports show.

With thick black dreadlocks falling down past his shoulders under an oversized, tilted baseball cap, Sensabaugh, 30, is credited by Wisconsin media for helping organize a series of marches since late May.

Most events have been peaceful, but at least one resulted in a standoff that ended with tear gas fired at his group when it didn’t disperse.

Each time, he is shown on video leading crowds through Milwaukee communities or along state highways, calling for change – always with a video camera to capture the moment and serve as another outlet to share his message.

That commentary is oftentimes directed at police and delivered well into the night, according to his group’s Facebook live posts and Milwaukee media reports.

A mural of Sensabaugh decorates a 14th Street building in his hometown. Graffiti artists had to fix the image at least once after it was defaced with racial slurs and the word “sexist” in July.

“We live in a world where people are misunderstood and maybe they misunderstood me,” Sensabaugh told the Milwaukee Journal-Sentinel at the time, insisting he wasn’t angry.

He has described his marches as structured – “organized chaos” – with a mission aimed at ending generations of injustice.

In June, he told the newspaper that he reminds fellow protestors not to get physically aggressive or touch police – and often preaches peace.

But in his live posts, he’s also used forceful language about those who have signaled that they would get in the way of his movement.

“We’re not here to burn houses or cities. We came to walk – that’s what we’re going to do,” he said in a livestream video posted this week following the Juniata Township shooting that injured a fellow activist and which remains under investigation.

“White supremacists ... if you point your guns at us you will die.”

Tear gas in the street

In Milwaukee, Sensabaugh was taken into custody in June during a march along an interstate highway.

As the group reached the Hoan Bridge in the city, police ran past the group and formed a line to halt their path, ordering them to exit the bridge, which was still open to vehicle traffic.

After tear gas was deployed, Sensabaugh responded by admonishing police and after he began backing up, an officer “bull-rushed him,” he claimed, while he was still recording the incident.

No charges were filed against Sensabaugh or the police officer in the incident.

It appears the rest of his group’s marches in the midwestern city ended without incident.

That hasn’t been the case nearly as often away from home.

Sensabaugh announced his planned march to D.C. last month in interviews and on Facebook, planning to travel 30 miles per day.

Two weeks ago, he and another organizer were arrested in the state of Indiana after their group ignored police orders to move their march off of a four-lane highway.

Marchers were walking alongside the road, but their motorcade was traveling on the right-hand traffic lane of a four-lane alongside them at the same pace.

“You’ve got traffic backed up for 67 miles,” a police officer said, in a moment recorded by the group. “That’s a huge concern for safety.”

The trooper gave the group the option of traveling on the shoulder of the road – but they declined, saying their cars protected walkers from being hit by other cars or objects.

After being handcuffed and taken into custody, they were later released.

Trooper Joseph Dunsmore said the group never notified them they planned to travel through Pennsylvania until after the Monday incident was reported.

A second incident occurred the following night when a man traveling in a pickup truck went past them and fired gunshots before fleeing the scene.

The gunman in that incident, Jeremy Decker, of Everett, faces a list of charges, including unlawful weapon possession.

State police indicated there were no issues with the Milwaukee group in Pennsylvania until Monday.

On Friday, the group will participate in the national March on Washington 2020 – on the anniversary of Martin Luther King Jr.’s “I Have A Dream” speech in 1963.

“I know this will be one of the most challenging things I’ve ever done in my life ... but I felt like this is something I wanted to do, and to use my platform to make an impact on the world ... and to (honor) one of the greatest black (men) that have ever fought for change,” he said in late July. “(It) is a big deal to me.”

Police interview dozens in Bedford County protest-turned-shooting; No charges yet in Route 30 incident

State police have conducted at least 30 interviews and are examining evidence to determine whether charges are warranted in a Juniata Township shooting that wounded a man traveling in a group marching to Washington, D.C., Trooper Joseph Dunsmore said Thursday.