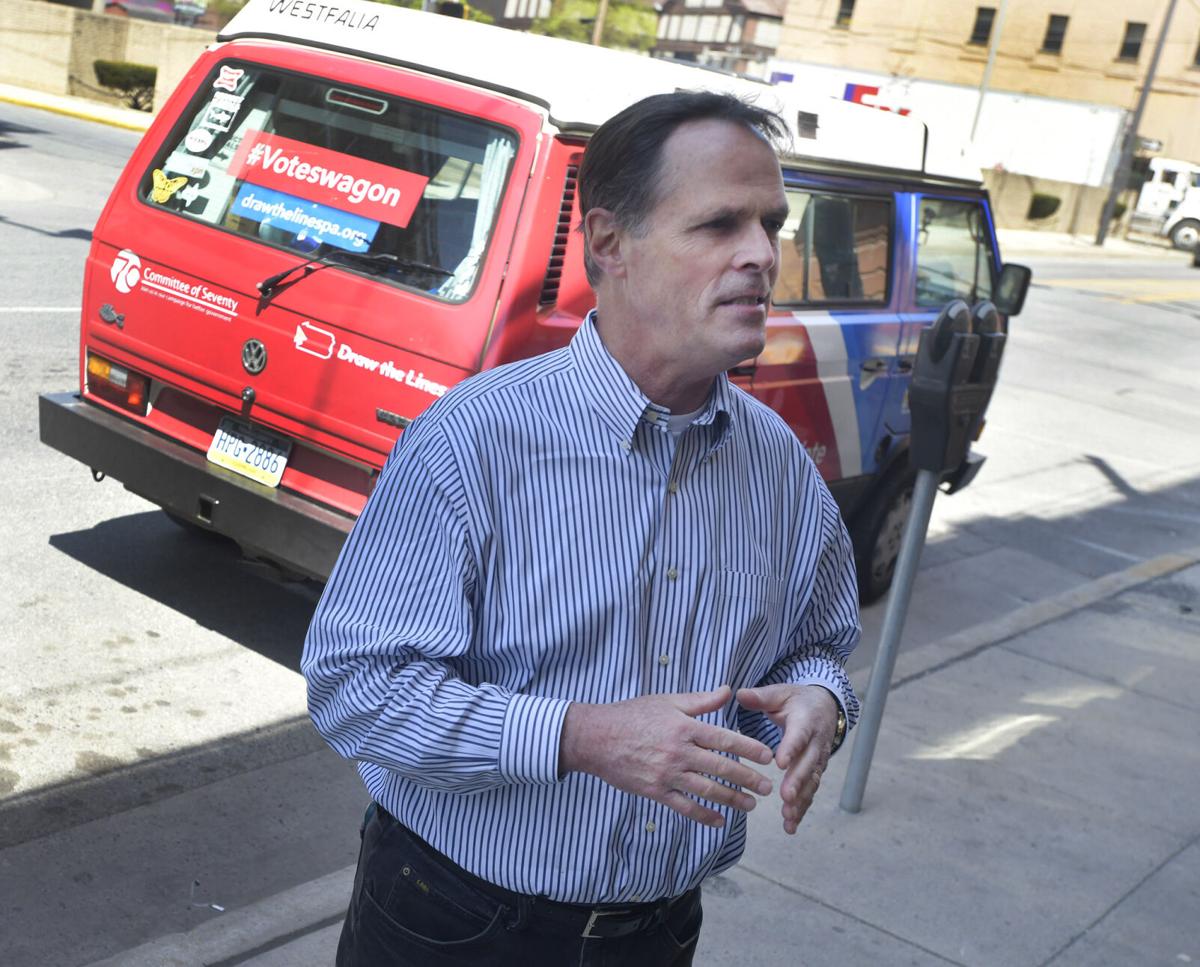 David Thornburgh, President and CEO of the Committee of Seventy speaking outside the Iconic Coney Island restaurant on Tuesday, April 27, 2021. 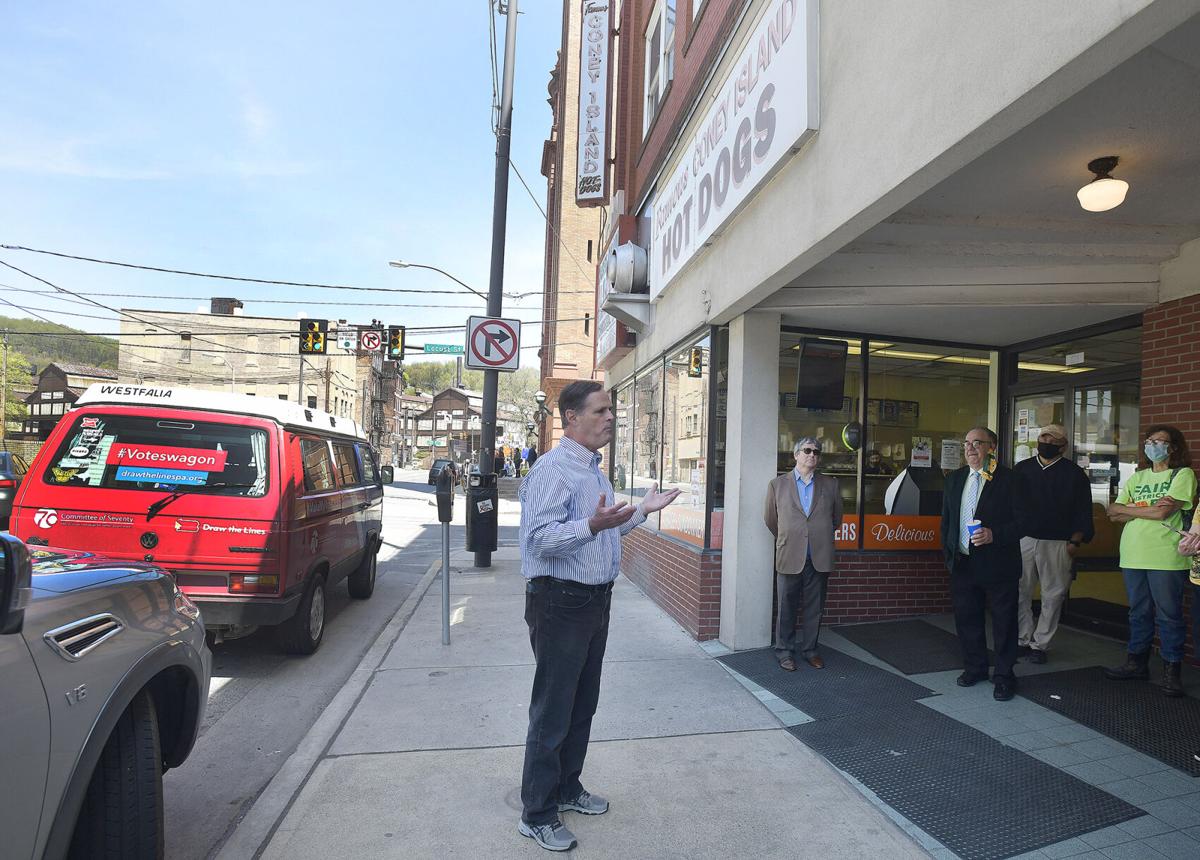 David Thornburgh, President and CEO of the Community of Seventy speaks about the need for a transparent, people-powered process to redraw Pennsylvania congressional and state legislative voting district lines following the results of the 2020 U.S. Census to folks in front of the Johnstown Coney Island restaurant on Tuesday, April 27, 2021. 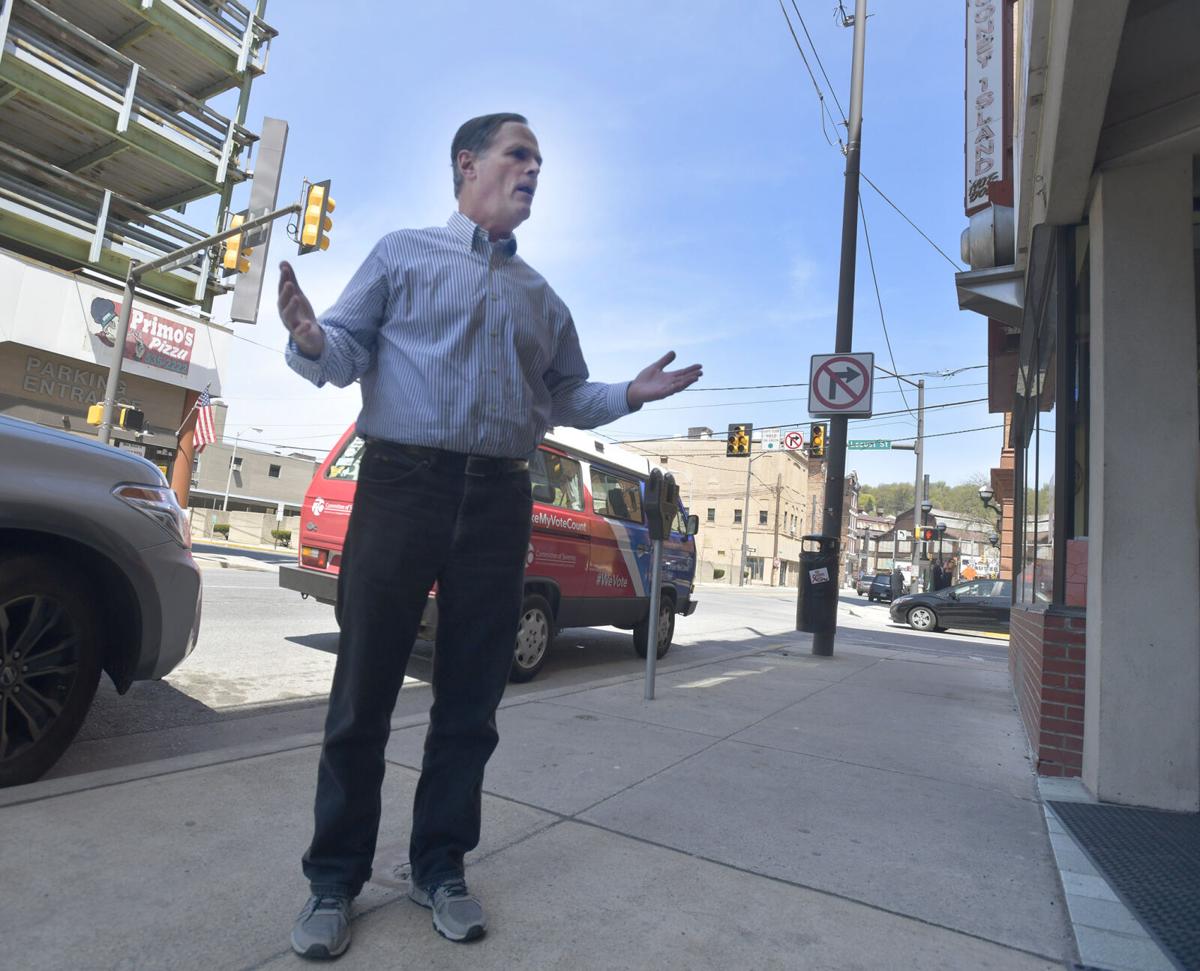 David Thornburgh, President and CEO of the Committee of Seventy speaking to supporters in front of the Iconic Coney Island restaurant during a Johnstown stop of "The great Voteswagon Tour of 2021". on Tuesday, April 27, 2020.

David Thornburgh, President and CEO of the Committee of Seventy speaking outside the Iconic Coney Island restaurant on Tuesday, April 27, 2021.

David Thornburgh, President and CEO of the Community of Seventy speaks about the need for a transparent, people-powered process to redraw Pennsylvania congressional and state legislative voting district lines following the results of the 2020 U.S. Census to folks in front of the Johnstown Coney Island restaurant on Tuesday, April 27, 2021.

David Thornburgh, President and CEO of the Committee of Seventy speaking to supporters in front of the Iconic Coney Island restaurant during a Johnstown stop of "The great Voteswagon Tour of 2021". on Tuesday, April 27, 2020.

Pennsylvania boasted 36 U.S. House of Representatives members and 38 Electoral College voters throughout the 1910s and 1920s.

Now, a century later, that level of clout is long gone.

Even while topping 13 million people for the first time and moving up a spot to become the fifth-most populous state, according to 2020 U.S. Census data released earlier this week, the commonwealth paradoxically will lose another seat in the House and vote in the Electoral College as a result of its 2.4% growth, lagging behind the nation’s historically low rate of just 7.4% over the past decade.

Reapportionment will drop Pennsylvania’s House delegation from 18 to 17 for the 2022 midterms and beyond, with its Electoral College membership going from 20 to 19.

Robert Gleason, former chairman of the Cambria County and Pennsylvania Republican parties, has seen the negative effect slowly unfold since he first became involved in politics in the 1970s when Pennsylvania had 27 congressmen and 29 electors.

“It impacts Pennsylvania tremendously because we do not have the horsepower in Congress that we did in those days because we had so many congressmen,” Gleason said. “We were able to get our agenda through for our commonwealth. It’s been very detrimental to the state to lose the congressmen and also to lose the electoral votes. It’s another thing that’s very disappointing. But it is what it is.”

Losing seats equates to losing power in the federal government, especially when the decline continues unabated for a century.

“You would think, one vote, nah, probably not a major significance,” said G. Terry Madonna, senior fellow in residence for political affairs at Millersville University. “And I would agree with that. But, over time, if you continue to lose seats, it just reduces your clout in the Congress for the obvious reasons that you have far fewer people serving on committees and being able to work up in terms of seniority to be subcommittee and committee chairs.”

Pennsylvania – a tossup with 20 Electoral College votes – was arguably the most hotly contested state during the 2020 presidential race.

Democrat Joe Biden defeated Republican Donald Trump by a margin of 50% to 48.8% on way to claiming the presidency.

Madonna believes that even with the Electoral College number dropping to 19, the state will still be important in the next presidential election.

“Pennsylvania will remain a battleground state, so it’s not going to change the competitiveness because we lose one electoral vote, to be sure,” Madonna said.

Pennsylvania was one of seven states to lose a House member/Electoral College voter as a result of reapportionment, along with California, Illinois, Michigan, New York, Ohio and West Virginia.

The changes continued a decades-long trend of population shifting away from the Rust Belt to the Sun Belt and West.

The Republican-controlled General Assembly then drew a map that pitted two Democrats – U.S. Reps. Mark Critz, from Johnstown, and Jason Altmire – against each other in the 2012 12th Congressional District primary. Critz defeated Altmire, but then lost to Republican Keith Rothfus, an Allegheny County lawyer, in the general election.

It was the first time in six decades that the congressman representing Johnstown was not from the immediate area, following the tenures of Reps. John Saylor (1949-73) and John Murtha (1974-2010).

The Democratic-majority Supreme Court of Pennsylvania then redrew the commonwealth’s district maps after ruling that the one designed by the GOP following the 2010 Census “clearly, plainly and palpably” violated the state Constitution due to excessive gerrymandering. Since then, Pennsylvania’s congressional delegation has been split 9-9 with U.S. Rep. John Joyce, R-Blair, 13th Congressional District, and U.S. Rep. Glenn “G.T.” Thompson, R-Centre, 15th Congressional District, representing the local region.

‘Fur is going to fly’

Change will come again as 18 seats must be reduced to 17.

On Tuesday, Draw the Lines PA hosted a Great Pennsylvania Voteswagon Tour of 2021 event in downtown Johnstown, promoting the creation of fair, non-gerrymandered districts overall, while specifically pointing to the commonwealth’s upcoming redistricting.

“Think of that as a great game of musical chairs where there’s 18 people circling and only 17 seats,” said David Thornburgh, president and CEO of the Committee of Seventy, a nonpartisan group that advocates for better government. “A lot of fur is going to fly, but it should not be an insider-driven partisan sport. It should involve honest conversation with people from the community.”

Thornburgh, the son of the late Gov. Dick Thornburgh, added: “If things go wrong, it could be the wild, wild west, and there could be a lot of blood spilt. You’ve already seen both parties kind of throwing their opening salvos, which is unfortunate because the people own these districts, not the parties.

“What we would like to see is a very robust, and open, and transparent process to get the communities involved in expressing how they want to be represented, how we go from 18 to 17.”

Cambria County Commissioners Tom Cherninsky and B.J. Smith, both Democrats, spoke at the event, as did local business leader Mark Pasquerilla, a Republican.

“I think we all want fair districts now with the importance of this redistricting,” Pasquerilla said. “Fair districts give us better representatives who are more committed to serving their constituents and it avoids radicalization that we have.”

What to watch during Biden's 1st big speech to Congress

President Joe Biden is putting the finishing touches on his first address to a joint session of Congress, a prime-time speech on Wednesday night on the eve of his 100th day in office.