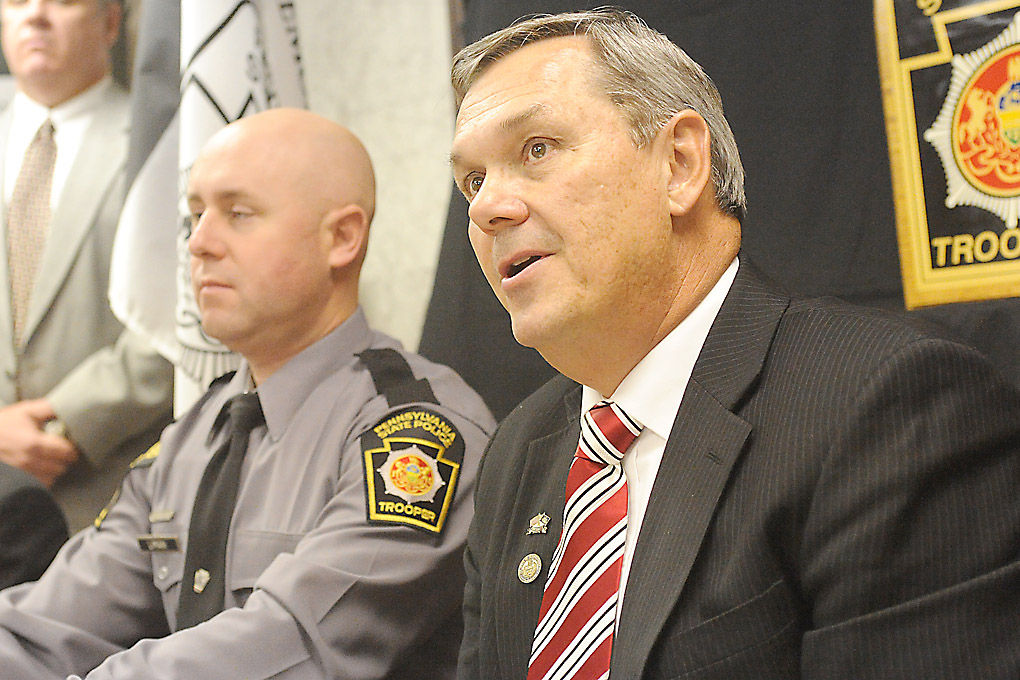 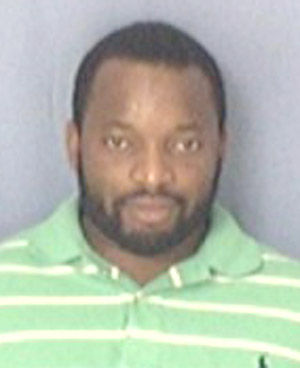 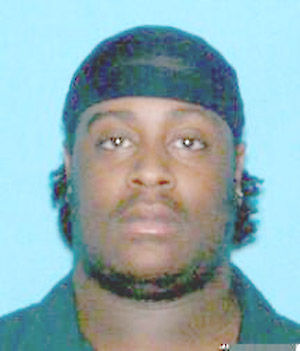 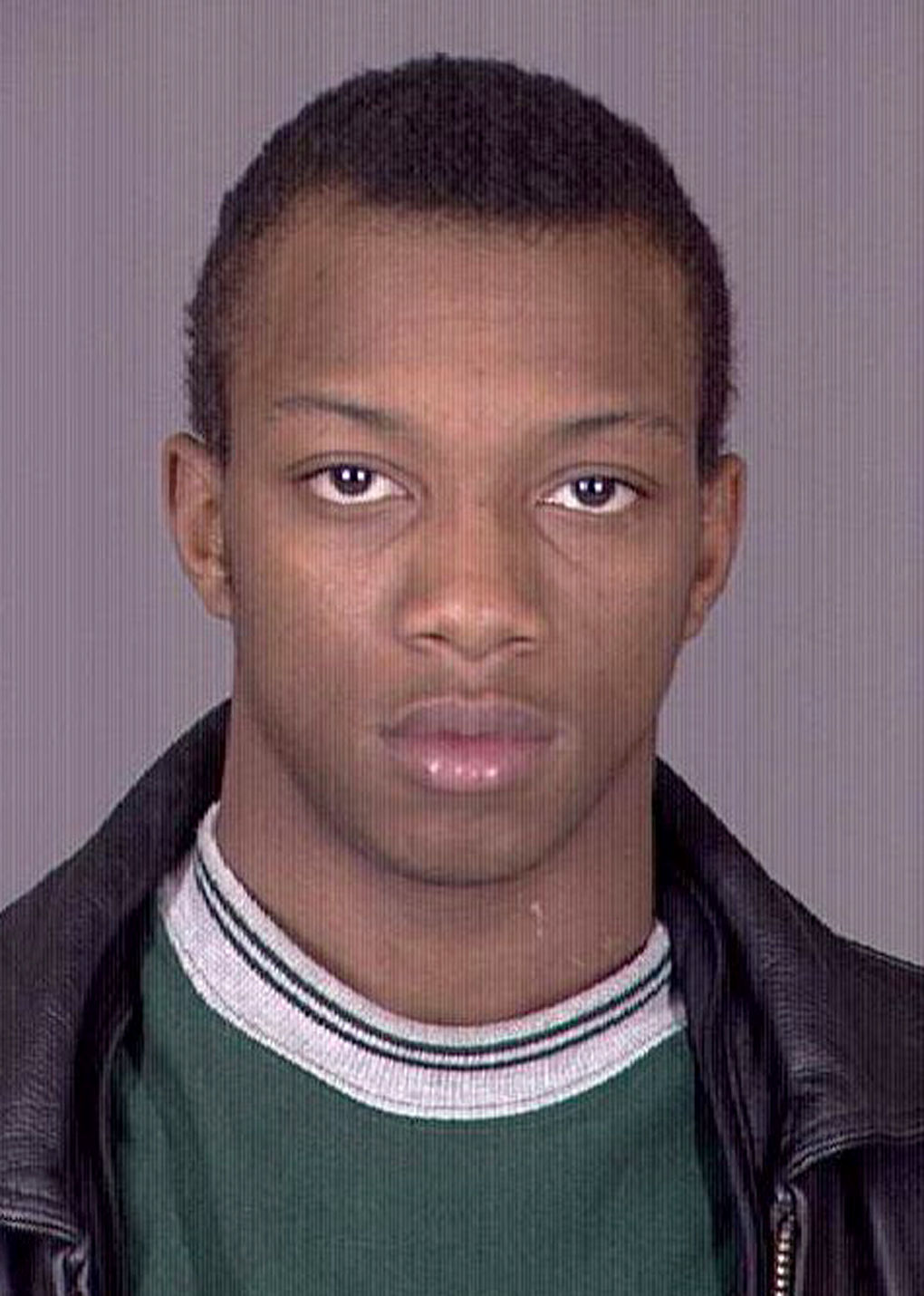 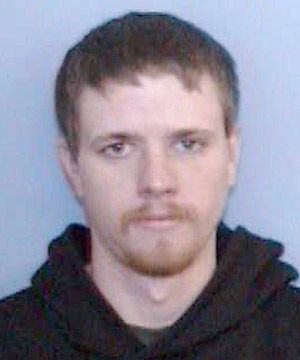 On Aug. 17, 2009, Bryant W. Adderley was an established drug dealer waiting in his Bakersville-area apartment for a cocaine delivery.

But the package that arrived was stuffed with baking soda. And the men who delivered it carried semi-automatic weapons and an intent to teach the 29-year-old Adderley a lesson.

On Friday, more than 14 months after Adderley’s bullet-riddled body was discovered, authorities announced a breakthrough: They’ve arrested one of the alleged shooters and are seeking help from the public in arresting the second.

Also in custody is an allegedly high-level drug supplier from New York and an alleged getaway driver from Friedens nicknamed “Rookie.”

It’s all the result of an investigation that involved four states.

“As this case unfolds in the court system, I think you’ll be impressed by the thoroughness of the police investigation that took place here,” said Somerset County District Attorney Jerry Spangler.

“There are a lot of pieces to this almost Rubik’s Cube type of incident,” Spangler added. “And they’ve come together to give us a really good picture of what happened here.”

Three men are jailed in connection with Adderley’s death:

Also charged is a man known only as John Doe, described as a bald black male standing 6 feet 5 inches and weighing about 300 pounds.

In court documents and in a Friday press conference, authorities detailed the incident and subsequent investigation.

Adderley, from Brooklyn, was staying in an apartment on Trent Road in Jefferson Township.

“He had a drug-distribution arrangement in more than Somerset County,” Spangler said. “I think it was three or four counties (where he) may be involved in distributing, usually cocaine but sometimes other substances as well.”

In a court affidavit, police say a witness told them Adderley was “receiving a kilo of cocaine or more per week.” Mallory was the alleged supplier.

But Adderley also was suspected of skimming cash that was supposed to be sent back to New York.

Police said Ziegel told them that he received a call from Mallory on Aug. 14, 2009. He was summoned to New Jersey, where Mallory announced that “they were going to teach the victim, Adderley, a lesson for stealing,” an affidavit said.

That vehicle had been rented at JFK Airport in New York under the name Calvin Mallory Sr., police said.

The three – Ziegel, Washington and the unknown suspect – packed up their “pseudo cocaine” and paid Adderley a visit, police said.

Ziegel waited in the driveway while the other two went inside.

Shortly after, he heard gunshots, and the two men returned.

“As Ziegel proceeded south on Trent Road, just a short distance from the scene, the two black males wiped down the firearms used to shoot Adderley and threw them out the passenger side of the vehicle,” investigators wrote in a court document.

Mallory then allegedly called the trio and asked “How did Godfather Part II go?”

Adderly died from multiple gunshot wounds to his head and chest.

While it may have appeared publicly that the case had gone cold, authorities actually got a break fairly quickly.

On Aug. 25, 2009, Ziegel was arrested in the Erie area by the Pennsylvania Fish and Boat Commission on a warrant from Fayette County.

He was driving a GMC Yukon registered in Ohio to Mallory.

And police said that, while Ziegel was being transported to Fayette County, “he indicated that he had information relative to a homicide investigation in Somerset County.”

The resulting investigation included recovery of both guns.

Spangler said ballistics tests have shown they are the weapons that killed Adderley.

Also involved in the probe were “numerous petitions to the court to obtain phone records and efforts to identify cell towers from which certain cell phones were used to identify locations of persons,” Spangler said.

Mallory is lodged in Somerset County Jail on unrelated charges including kidnapping.

Anyone with information on “John Doe” is asked to contact Somerset state police at 445-4104.

Charges against all four men include homicide and criminal conspiracy. Other charges filed in the case include robbery, a drug-law violation and criminal use of a communication facility.

The suspects also have been charged with being part of a “corrupt organization,” a felony charge that is the state’s equivalent of the federal anti-racketeering law known as RICO, Spangler said.

The district attorney also said Somerset County is developing a reputation for solving and prosecuting drug-related cases and for imposing “very tough sanctions” on those who are convicted.

“The word on the street among these drug dealers is that Somerset County is a place to be avoided,” Spangler said.

“We hope that (Friday’s) arrests continue to reinforce that message.”

A state prison inmate on Monday pleaded guilty to third-degree murder and was sentenced to eight to 16 years in prison for ordering a Somerset County killing more than a decade ago.