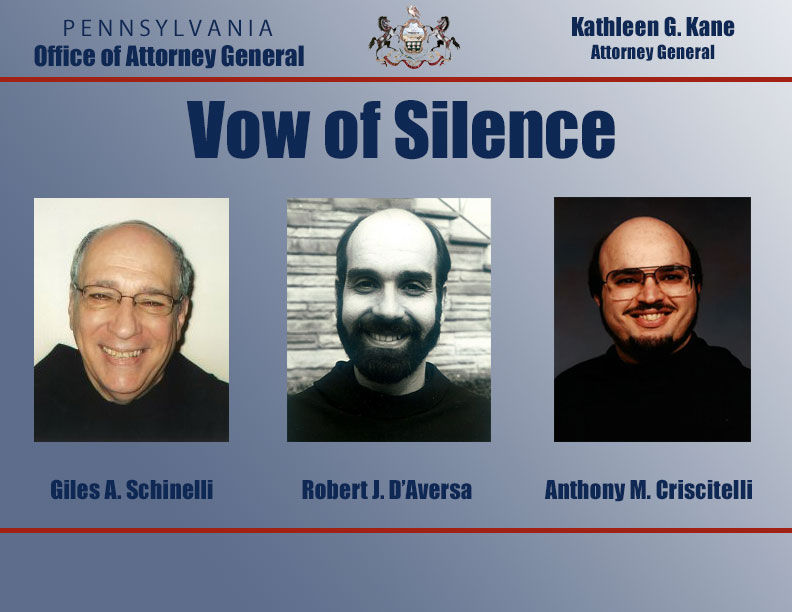 This graphic shows three members of the Franciscan Friars, Third Order Regulars, Province of the Immaculate Conception charged by the Pennsylvania Office of Attorney General with endangering the welfare of children and criminal conspiracy. 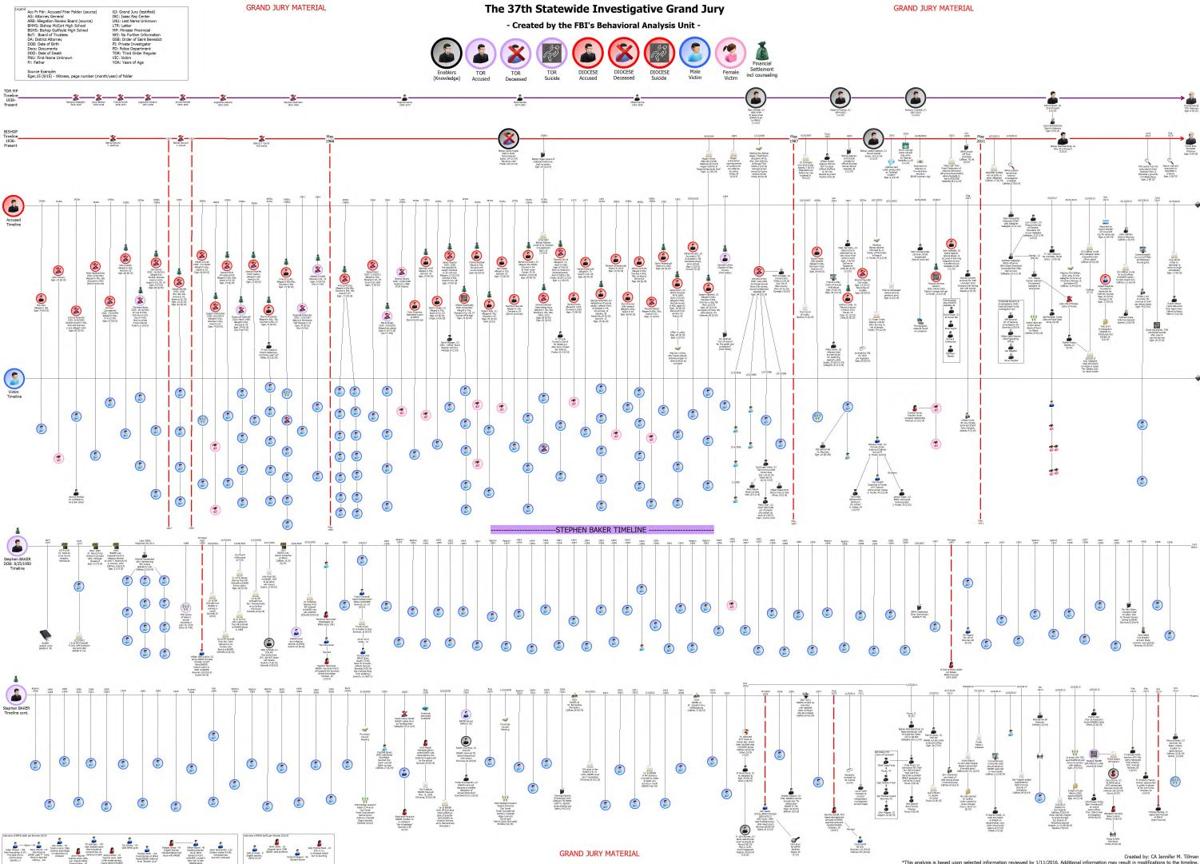 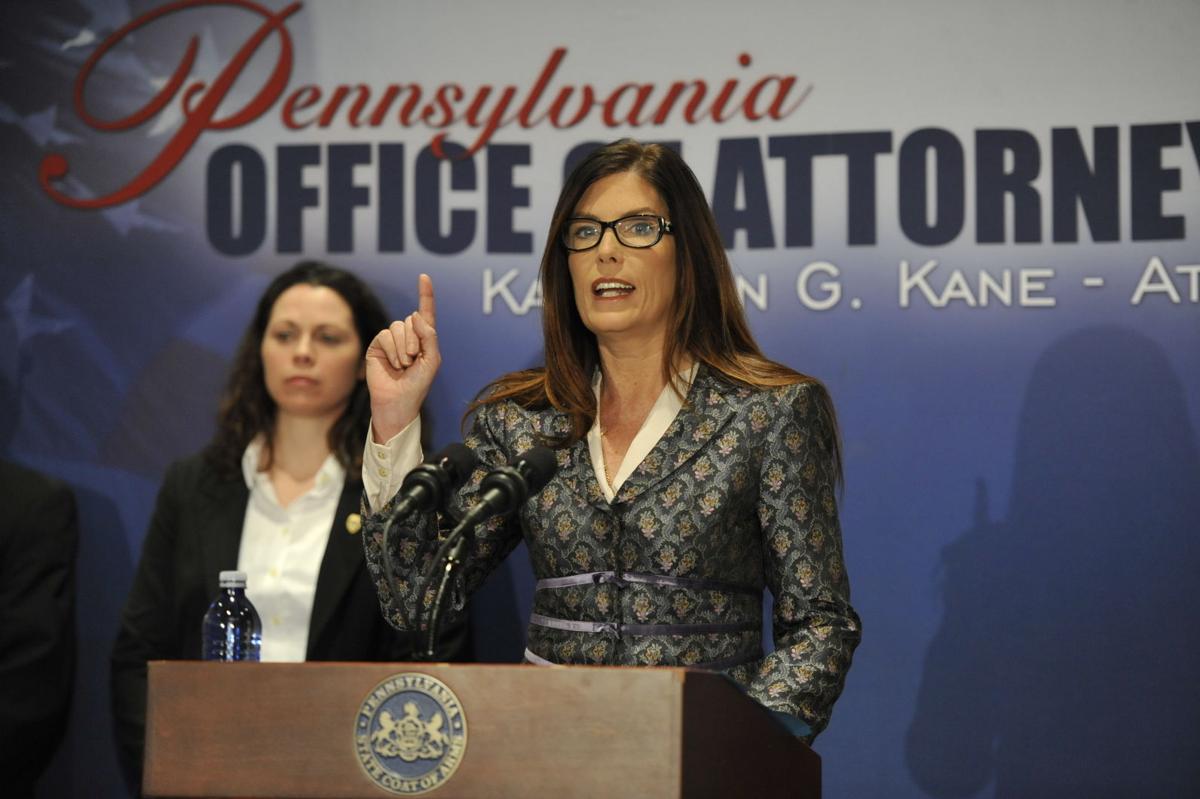 This graphic shows three members of the Franciscan Friars, Third Order Regulars, Province of the Immaculate Conception charged by the Pennsylvania Office of Attorney General with endangering the welfare of children and criminal conspiracy.

Three members of the Third Order Regular, Province of the Immaculate Conception have been criminally charged in connection with the investigation of Brother Stephen Baker, who was accused of sexually abusing more than 100 children at Bishop McCort High School.

Pennsylvania Attorney General Kathleen Kane announced the indictments of Giles A. Schinelli, 73; Robert J. D'Aversa, 69; and Anthony M. Criscitelli, 61, during a news conference Tuesday at the University of Pittsburgh at Johnstown Living Learning Center. The three men face one count each of endangering the welfare of children and criminal conspiracy.

A grand jury determined the three men – all ministers provincial of the Blair County-based order – had exclusive and total control over where to place Baker, who served at Bishop McCort from 1992 to 2000 and had continued access to the campus even after 2000.

“These men knew there was a child predator in their organization,” Kane said. “Yet they continued to put him in positions where he had countless opportunities to prey upon children. Their silence resulted in immeasurable pain and suffering for so many victims.

"These men turned a blind eye to the innocent children they were trusted to protect.”

Kane added: “Schinelli, D'Aversa and Criscitelli engaged in efforts to protect the image and reputation of the Franciscan friars rather than act in the best interest of the children that they served and the organization to whom they owed their duty of care.”

The AG's report said the Third Order Regular Franciscans did not report any allegations against its members to police, choosing "silence over children's safety."

The Province of the Immaculate Conception of the Third Order Regular Franciscans, the Roman Catholic Diocese of Altoona-Johnstown and what is now called Bishop McCort Catholic High School reached settlements with more than 80 of Baker's victims.

The new report alleges Schinelli, the minister provincial from 1986 to 1994, sent Baker for a psychological evaluation and was told the brother was not to have one-on-one contact with children. Schinelli nonetheless assigned the friar to Bishop McCort, where he served in multiple roles, including as an athletic trainer.

D'Aversa, who held the minister provincial position from 1994 to 2002, allegedly failed to notify school officials and law enforcement that the reason Baker was removed from his duties at Bishop McCort in 2000 was because a new and credible allegation of child sexual abuse was made against him, according to the grand jury. Baker still had continued access to the school afterward.

Criscitelli, the minister provincial from 2002 to 2010, knew Baker required "safety plans" advising no contact with minors, but he lived in Minnesota, which left Baker unsupervised in Pennsylvania, as alleged in the report.

No one else from the order, the Roman Catholic Diocese of Altoona–Johnstown, Bishop McCort Catholic High School or local law enforcement agencies faces criminal charges at this time.

Schinelli and D'Aversa live in Florida. Criscitelli resides in Minnesota.

They are aware of the charges against them. All three have until the end of the week to turn themselves into authorities.

“If they don't do it by Friday, we will go get them,” Deputy Attorney General Daniel Dye said.

The diocese did not provide a statement.

“This is a great day for good and a terrible day for evil,” said Mitchell Garabedian, a Boston attorney who represented more than 30 of Baker's victims.

Survivors Network of those Abused by Priests hopes the charges will be the beginning of an even deeper investigation.

“We hope these charges will prompt more victims, witnesses and whistleblowers to come forward, call police, expose wrongdoers, protect kids and start healing,” SNAP President Barbara Blaine said. “Now is no time for complacency. These complicit church officials will no doubt get top-notch lawyers and try desperately to exploit any and every legal loophole to evade conviction. So it’s crucial that others with suspicions about or knowledge of wrongdoing by Franciscans step forward."

In a previous report, released two weeks ago, the grand jury alleged the diocese participated in a decades-long cover up to protect at least 50 priests and other religious leaders accused of sexual child abuse.

One victim, quoted in the Baker presentment, described the experience “like coming home covered with mud and a terrible taste in your mouth.”

The victim concluded: “You hope your parents could see the mud on you and ask what's wrong, but they are more than happy that the priest wants to see you again.”

State Rep. Bryan Barbin, D-Johnstown, has introduced two bills designed to extend the statutes of limitations in cases of sexual abuse of children.

When Cambria County District Attorney Kelly Callihan referred a case involving a former athletic trainer at an area school to the attorney general’s office in 2014, she didn’t anticipate what has unfolded in the past several weeks.

Former priest Robert M. Hoatson of Livingston, New Jersey, has advocated for sexual abuse victims around the globe and says this region’s problems are familiar, but the response has been more difficult.

Within the presentment Tuesday against members of the Franciscan Friars is the text of an interview with Anthony M. Criscitelli, one of three members of the order now facing charges related to the sexual abuse of children by Brother Stephen Baker at Bishop McCort Catholic High School.

The following Franciscan Friars are accused of child sexual abuse in a report released March 15, 2016, by the Pennsylvania Office of Attorney General based on the findings of a grand jury investigation:

No “conclusive evidence” could be found that the school at the center of the Brother Stephen Baker child sex abuse scandal did anything legally wrong in how it handled the situation, according to a report issued Tuesday, following an almost two-year investigation conducted by Pennsylvania's office of attorney general.

News that three Franciscan leaders were indicted in a case tied to a former school athletic trainer's sex abuse scandal was met with a mix of relief, anger and silence by the Bishop McCort community Tuesday.

An arraignment hearing for the three Third Order Regular, Province of the Immaculate Conception religious leaders charged as a result of an investigation into allegations of child sexual abuse committed by Brother Stephen Baker is scheduled to take place on Friday.

After weeks of emotional and sensational revelations being made about child sex abuse within the Roman Catholic Diocese of Altoona-Johnstown and Province of the Immaculate Conception of the Third Order, the legal process moved Friday to the standard phase of arraigning defendants.

For decades, the Roman Catholic Diocese of Altoona-Johnstown allegedly perpetrated a coverup to protect priests accused of sexually assaulting…

Three Franciscan friars accused of conspiracy and endangering the welfare of children for giving a suspected serial sexual predator – Brother Stephen Baker – assignments where he had access to minors are asking to have their cases dismissed.