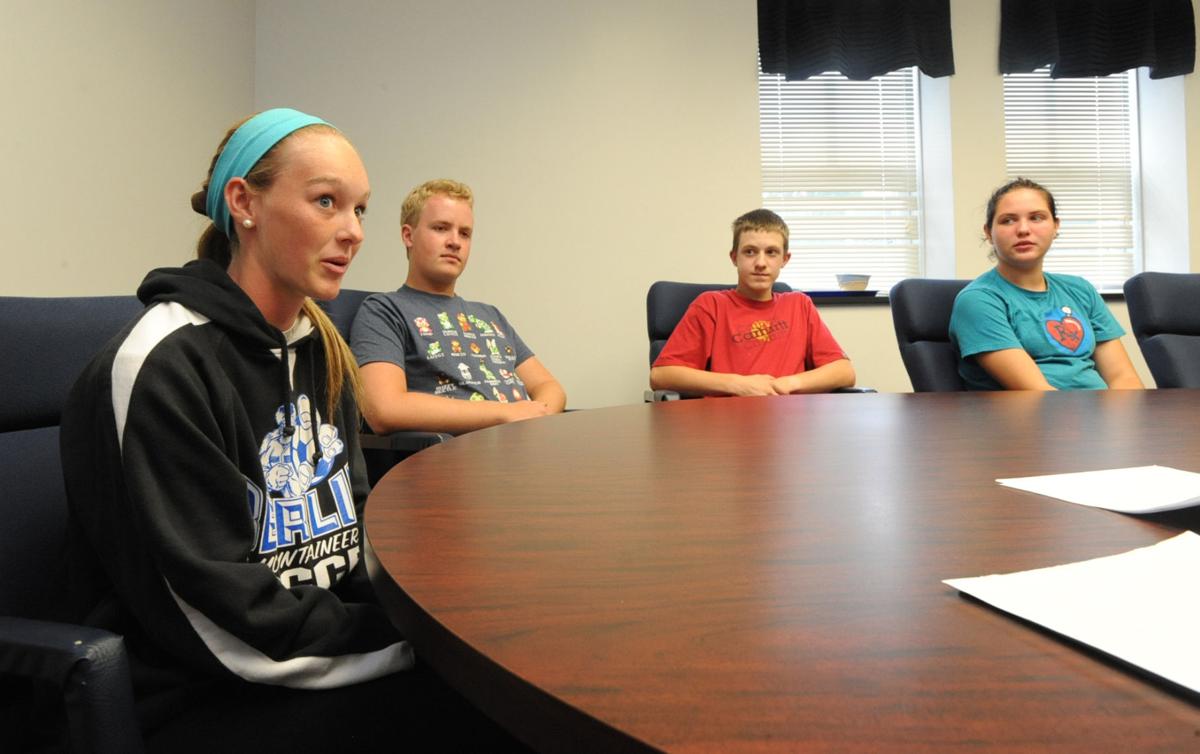 Shanksville-Stonycreek High School students, from left, Maddie Walker, 17; Robert Fidler, 17; Reece McCall, 14; and Samantha Creamer, 12, discuss growing up near the Flight 93 National Memorial and offer their thoughts on the terrorist attacks of Sept. 11, 2001, during an interview Sept. 6, 2016, at the school. 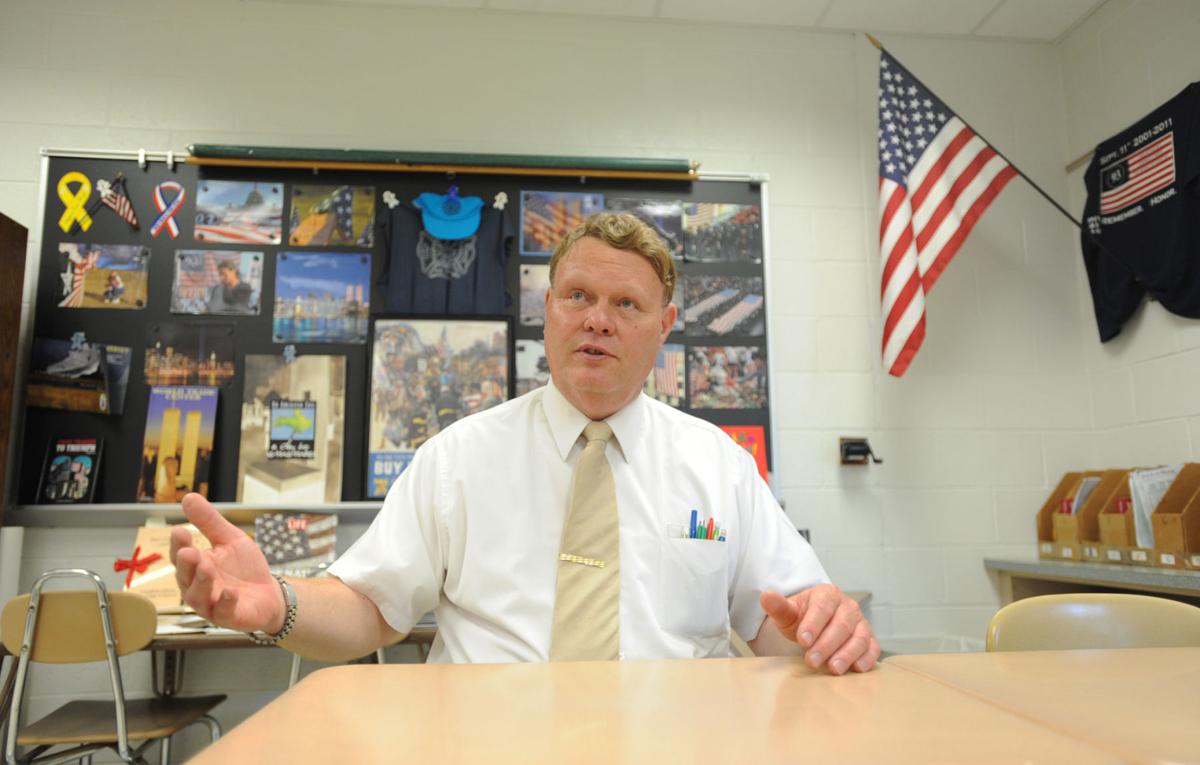 J.P. O’Connor, a fourth- and fifth-grade social studies teacher with the Shanksville-Stonycreek School District, describes the place the story of Flight 93 and the national memorial holds in curriculum.

Shanksville-Stonycreek High School students, from left, Maddie Walker, 17; Robert Fidler, 17; Reece McCall, 14; and Samantha Creamer, 12, discuss growing up near the Flight 93 National Memorial and offer their thoughts on the terrorist attacks of Sept. 11, 2001, during an interview Sept. 6, 2016, at the school.

J.P. O’Connor, a fourth- and fifth-grade social studies teacher with the Shanksville-Stonycreek School District, describes the place the story of Flight 93 and the national memorial holds in curriculum.

But he knows exactly what his grandfather was doing when United Flight 93 flew over his Indian Lake, Pa., home before crashing down in a nearly field.

"He was in his living room, with my grandmother, eating breakfast, and he heard the impact of the plane," Fidler said. "About a second later – there were a bunch of trees over his house – all the acorns hit his roof. After that, he went down to the end of his dock. He lives basically right across the lake from where the plane went down, and he could see the smoke cloud going up."

Despite their proximity to the Flight 93 National Memorial and crash site, many Shanksville-Stonycreek students are much like the rest of their generation. They have relied on their families and their teachers to tell them about the events of 9/11.

A hijacked Flight 93 crashed less than two miles north of the Shanksville high school – the same day terrorists hijacked three other planes and flew two of them into the towers of the World Trade Center in New York City, and a third into the Pentagon near Washington, D.C.

"These groups of kids weren't alive at the time, so they need to be taught most everything," social studies teacher J.P. O'Connor said.

"My mom had to come here to school and pick up my sister," she said.

Walker, who was two years old on 9/11, has only the vaguest memories of the crash of Flight 93.

"I just remember the house shaking, I think," she said.

Students can recount in detail what their teachers were doing at the moment Flight 93 went down.

"(The teachers) finally heard the news, so when the second (New York) plane crashed, they put all the kids in Mr. O’s room and they went to another room to watch the news," seventh-grader Samantha Creamer, 12, said. "And then (a teacher) commented that, 'If a plane crashes in Shanksville, the world’s going to end.’ Literally five seconds later, the plane crashed.''

The shock from the impact rattled the school building, the students have been told.

"The boards in the ceiling all jumped up," Fidler said.

"Some of them came out," eighth-grader Reece McCall, 14, added. "In (one room), one light came out of the ceiling."

These stories and more form the substance of the Shanksville-Stonycreek faculty's 9/11 curriculum. Although none of the students were there when Flight 93 crashed, they can rattle off the details of the event because, by talking about their experiences, their teachers have conveyed the reality of the attacks.

"I think they do get a lot of firsthand instruction from their teachers. Most of them were in the building on that day," said Samuel Romesberg, superintendent of the Shanksville-Stonycreek School District.

Romesberg said teacher retirements are beginning to thin the ranks of those who were on faculty that morning.

"We just had an art teacher retire at the end of last school year who is actually quoted in the (Flight 93) Visitor Center," Romesberg said. "It being 15 years later, we're starting to lose some of those teachers. We've already lost quite a few. That firsthand experience is leaving our building."

While the fact that Flight 93 crashed nearby doesn't affect most people's daily lives, awareness of the attacks among the younger generation has begun to fade somewhat.

“It’s kind of only brought up around here around this time of year," Fidler said. "After that, you don’t really hear of it again. Everyone knows about it, but no one really talks about it."

O'Connor – the "Mr. O" in whose classroom students took shelter on 9/11 – said that in 2009, out of 27 students in one of his fourth-grade classes, only one knew that planes had crashed in New York, Washington and Somerset County. One other student knew that a plane had crashed near Shanksville, but 25 students had never heard of the 9/11 attacks.

To bolster his students' knowledge, O'Connor turned the back wall of his classroom into an interactive display of 9/11 history featuring thick binders of photos taken in the aftermath, news clippings, letters of support and memorabilia sent to Shanksville students by well-wishers from around the country.

In September each year, he tells his students about his experience at the school on 9/11 and shows them recordings of the day's news coverage.

In the hallway outside his classroom, O'Connor has hung up 40 laminated commemorative pages – one in honor of each passenger and crew member from Flight 93 – from newspaper accounts. The pages include pictures and brief biographies of the passengers and crew of Flight 93.

O'Connor said that since the 10th anniversary of the attacks, his students have become more knowledgeable about the subject.

District teachers and officials hope the Flight 93 National Memorial's Visitor Center, opened for the 2015 anniversary, will help keep awareness of the 9/11 attacks alive among those too young to remember the day.

Fidler said he has visited the memorial several times, either with out-of-state relatives or on his own.

"I’ve been there a few times just to see what they’re doing while it’s under construction," he said. "It's very nice. It's peaceful, serene ... but it's solemn, too."

Each year, the entire senior class will visit the memorial for the anniversary observance if Sept. 11 falls on a weekday, Romesberg said.

Younger students, however, may be less likely to visit outside of school-sponsored trips. Neither Creamer nor McCall has ever been to the memorial; Walker last visited five years ago, on the occasion of the 10th anniversary of the attacks.

With the opening of the memorial's new Visitor Center in 2015, Shanksville-Stonycreek district officials have begun planning to incorporate field trips to the memorial into their curriculum, Romesberg said.

"The people at the (memorial) are including us," Romesberg said. "They've given us an open-ended invitation to go over to that facility any time for educational purposes – field trips, or anything of that sort. They've been wonderful."

'Need to know it'

During an in-service day last year, Shanksville-Stonycreek's teachers traveled to the memorial and met with park rangers to develop connections and to start working on a curriculum that includes the memorial's Visitor Center.

O'Connor took his students to the memorial earlier this month.

"We went through the whole thing," he said. "The nice thing about the Visitor Center is that (it) tells a story. The first big quote, on the first panel, is from our art teacher, telling what a beautiful day it was."

Some students recognized older friends and family members in the Visitor Center's pictures of Shanksville. O'Connor said he hoped that personalizing the events would make them more real to his students – something which is perhaps more important in Shanksville than in places with less of a direct connection to the attacks.

"They really need to know it, because most of them will live in the Shanksville area, and they'll be asked questions for the rest of their lives about what happened," O'Connor said.

"I want to personalize it"

Shanksville: The next generation

Officials at the Flight 93 National Memorial in Shanksville have noticed a generational disconnect between adults and young children who visit the site.

Photographer David Handschuh says all assignments have two goals: “To tell the truth with my images, and to record history.”

Gov. Tom Wolf will not make a scheduled appearance at the Flight 93 National Memorial on Sunday.

With the official opening of a new 21-mile segment of the September 11th National Memorial Trail, a network of bike trails now connects all three 9/11 memorials – in Somerset County, New York City and Arlington, Virginia.

For Iraq war veteran and family, 9/11 more than a history lesson

They're called Generation Z – kids born after 9/11, whose knowledge of that day derives mostly from news documentaries, books, and the recollections of their parents.

When Capt. Jason Dahl piloted a Boeing 757 into the air early on Sept. 11, 2001, he was doing so as a favor to another pilot, who was a family man, according to his cousin Stanley Atkinson of Goshen.

Fifteen years. It was a lifetime ago; it was also just yesterday.

Scott Allen repeated the word at least a dozen times during a conversation in the aftermath of the Sept. 11 terrorist attacks 15 years ago.

For years, Connie and Dave Steffy had talked about coming to the Shanksville site where Flight 93 crashed on Sept 11, 2001.

A 93-foot tower with 40 wind chimes will guard the entrance of the Flight 93 National Memorial near Shanksville, said Stephen M. Clark, superintendent of the National Parks of Western Pennsylvania, during a presentation Wednesday at Somerset Area High School.

For Ed Root and Ken Nacke, the memories of Sept. 11, 2001, remain just as vivid today as they were on the day they were made.