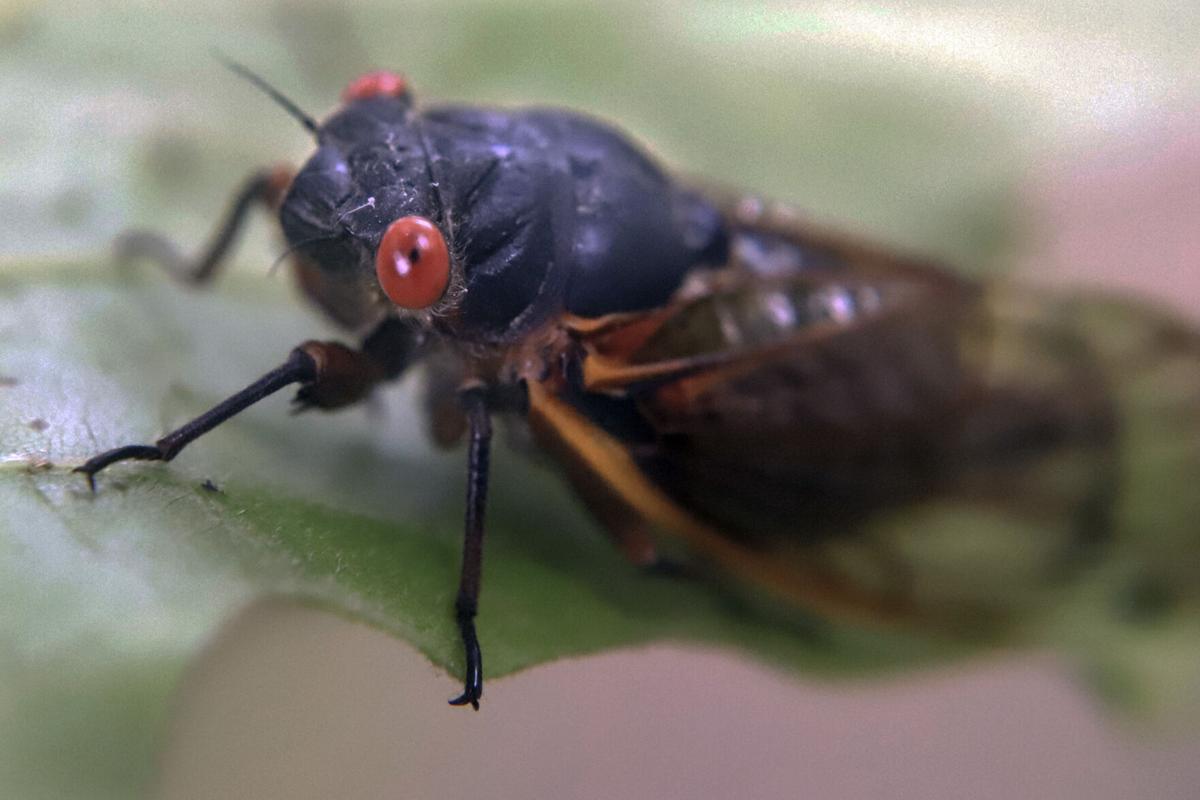 One of the millions of periodical cicadas in the area clings to a leaf on Saturday, June 1, 2019 after it emerged from a 17-year hibernation in Zelienople, Pa. The insects come out of the ground once the temperature reaches optimum, then climb into trees and make a droning sound to attract mates to breed. Their activity will peak between mid-May and mid-June, and then die off about four weeks after first emerging according to the Department of Agriculture web page. (AP Photo/Keith Srakocic) 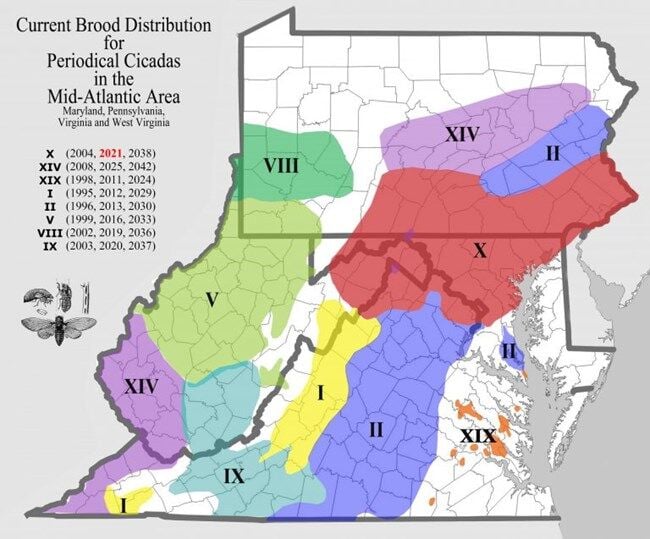 National Park Service map showing when and where cicada "broods" will arrive. 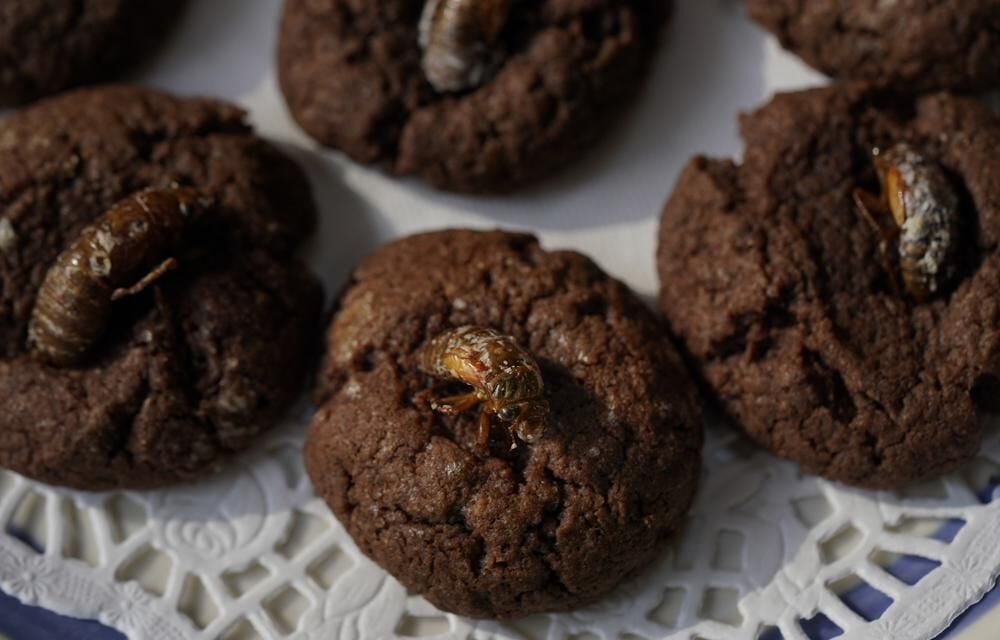 Cicada nymphs appear on top of chocolate cookies at the home of University of Maryland entomologists Michael Raupp and Paula Shrewsbury in Columbia, Md. on May 17, 2021. The cookies are meant to depict the cicada nymph emerging from the dirt. (AP Photo/Carolyn Kaster)

One of the millions of periodical cicadas in the area clings to a leaf on Saturday, June 1, 2019 after it emerged from a 17-year hibernation in Zelienople, Pa. The insects come out of the ground once the temperature reaches optimum, then climb into trees and make a droning sound to attract mates to breed. Their activity will peak between mid-May and mid-June, and then die off about four weeks after first emerging according to the Department of Agriculture web page. (AP Photo/Keith Srakocic)

Cicada nymphs appear on top of chocolate cookies at the home of University of Maryland entomologists Michael Raupp and Paula Shrewsbury in Columbia, Md. on May 17, 2021. The cookies are meant to depict the cicada nymph emerging from the dirt. (AP Photo/Carolyn Kaster)

They creep their way to the skies for a fleeting moment every 17 years, broadcasting a high-pitched mating call that has greeted – and goaded – humanity since prehistoric times.

The devout pilgrims mistook the “periodic” cicadas for a winged Biblical plague after landing at Plymouth Rock.

And when the Blair and Bedford counties-bound “Brood X” variety took to the skies in Princeton, New Jersey, nearly 51 years ago, Bob Dylan miscredited their singular song to another winged insect when he penned “Day of the Locusts” in 1970.

“A lot of people have misconceptions about them. First, they aren’t locusts. and second, they aren’t dangerous,” said Mullendore, who works as an environmental educator at Canoe Creek State Park near Altoona. “The biggest thing we tell people is that they aren’t going to hurt anyone.”

While there’s no question it will get noisy in this summer to the east of Cambria County, Mullendore views the moment as an ear-splitting invitation – a chance to experience a “fascinating” biological phenomenon that occurs just once every 17 years.

“Cicadas are one of the insect world’s great survivors,” Mullendore said. “And these are a brood that is different than every other cicada that you would normally see or hear in our region every summer. This is something people should get excited about.”

Where will they be?

Brood X’s territory includes a swath of western Maryland, West Virginia’s Potomac panhandle and southern Pennsylvania as far west as Bedford County and a small southeastern sliver of Somerset, according to the National Park Service maps.

The cicadas will be singing in parts of northern Virginia and Tennessee, too.

Brood X cicadas earned the “periodical” designation for being one of just seven across the mid-Atlantic that only emerge once every 17 years.

In between their 17-year showings, they go through five separate stages of development, living on tree roots as underground larva and, eventually nymphs, Mullendore said.

“They’re always among us,” she said. “They’re just underground.”

In the 17th year, when the summer air warms up and brings the ground temperature to 64 degrees, they dig “escape tunnels” to the surface.

They shed their protective exoskeletons, dry off their new wings and hit the skies, sending out a mating call that’s impossible to ignore.

Think of it as love in the air – a loud, somewhat annoying love, perhaps.

“When you’re hearing them in the hundreds and thousands, it’s like standing next to a chain saw,” she said. “But what we always try to remind people is that it doesn’t last forever.”

Still, it signals a swan song for the male cicadas.

Once they mate, enabling the female to lay precious eggs, they die.

But the mission they’ve worked toward for nearly two decades is complete.

Of course, before that happens, the flying insects will blanket just about everywhere there are leaf-shedding trees – whether that might be Harrisburg’s busy suburbs or rural northern Bedford woodlands.

Or a shaded back yard anywhere in between.

State Department of Agriculture officials have urged the public to avoid the urge to reach for pesticides, saying the consequences could far outweigh the benefits.

“The risk of harming beneficial pollinators or other bugs, or pets or other wildlife that may eat cicadas, to wipe out a temporary annoyance is not worth it,” said Agriculture Secretary Russell Redding.

“Save the insecticides for the truly bad bugs ... and let Brood X brood in PA for a few short-lived weeks.”

Mullendore called the cicadas the ultimate survivors, saying they have adapted to ensure their species can withstand the numerous risks they face.

Without question, many will end up as dinner for raccoons, squirrels and birds, Mullendore said.

Even once the bugs take to the sky, they fly like they’re drunk.

They waver and wobble in the air. and one by one, they crash to the ground like tangled six-legged kites.

For nature’s critters, they’re an easy meal, she said.

But by that point, millions of cicada eggs will have survived, enabling their tiny nymphs to hatch and burrow into the ground for another 17 years, she said.

Greater Johnstown is home to another type of cicada, Brood VIII, which last appeared in smaller numbers in 2019.

The next wave won’t arrive until 2036, researchers say.

But to the east, Mullendore has already spotted signs of the bugs’ emergence at Canoe Creek, a 900-acre park near Altoona.

Their chimney-like tunnels litter the bases of deciduous trees.

But he said there’s already a buzz about them from area anglers.

Social media and outdoors magazines are fueling that frenzy, which he said, and “might be as loud as the cicadas, this time around,” Lichvar said.

To Mullendore, Brood X cicadas also generate so much interest because they are so “deliciously creepy looking.”

But they are beautiful bait, Lichvar said.

Lichvar said the major swarms will likely be in full display in June. That’s when fish will start taking notice, he said.

He’s already planned several trips this summer to the Juniata River and other likely hot spots – where trees line the streams and riverbanks and the bugs will eventually fall like rain onto the waterways below.

Once the fish get hooked on the bugs, he expects a wave of willing anglers will flood parts of Pennsylvania to take advantage of the opportunity.

“I think hundreds, if not thousands, of people will be traveling to fish this summer when the conditions are right,” he said. “They’ll be paying for fuel, food and places to stay – like I will.

“Because once these fish start to lock in on cicadas, there’s not a fish that won’t chase them. Whether it’s a catfish, carp, trout or bass, it becomes a feeding extravaganza.”

The protein-packed pests also land on the menu for some eastern cultures, too, Mullendore said.

Bugs are still viewed as an “icky” thing in America, she added.

But as arthropods, they’re also a sort of a cousin to shellfish crabs and lobsters. (Shellfish allergy sufferers, take heed.)

And some chefs have apparently taken notice.

One contributor on Food.com posted a recipe for a breaded, deep-fried cicada on the popular idea-sharing website.

The New Jersey woman said the recipe could be whipped together in 13 minutes for as many as five “gutsy” people.

In “Cooking With Cicadas,” author R. Scott Frothingham likened the creatures to shrimp of the dirt.

Mullendore doubts many people will be so bold.

But the DCNR’s state park system is scheduling cicada-related educational programs across Pennsylvania in response to the public’s growing interest in seeing the winged wonders.

“We’re getting a lot of calls about them,” she said. “People are really excited.”

Will they hurt my dog? Cicada Q&A

Common questions about the cicadas that swarm our skies every 17 years.

Do cicadas bite?  No. They won't bite or hurt you. Their tiny feet are prickly to enable them to climb trees though, so if one lands on you, you'll feel it.

Do they drink blood? No. Unless you're a plant. They feed off of plant fluids that exist on the twigs of woody shrubs bove ground and before that, tree root sap.

What if my dog ate one?  Cicadas aren't toxic but just like anything else the crunchy bugs are best in moderation. They can be tough on the digestive tract.

Can I spray them with pesticide?  Pesticide can cause more harm than help. That's when health issues can occur for animals that target them as snacks because they won't differentiate between a healthy bug and another sprayed with chemicals, ___ said.

How long will the noise last?  The cycle generally can run up to two months.

Are they attracted to loud sounds?  It's likely they are attracted to certain noises.  If you snap your fingers with a male cicada nearby, it'll draw it toward you, she said.

Can they harm my plants?  Experts say small saplings planted in 2021 can be at risk (Wait until late summer, if possible) hold off until but they're helpful to older ones, helping to "prune out" weak branches.