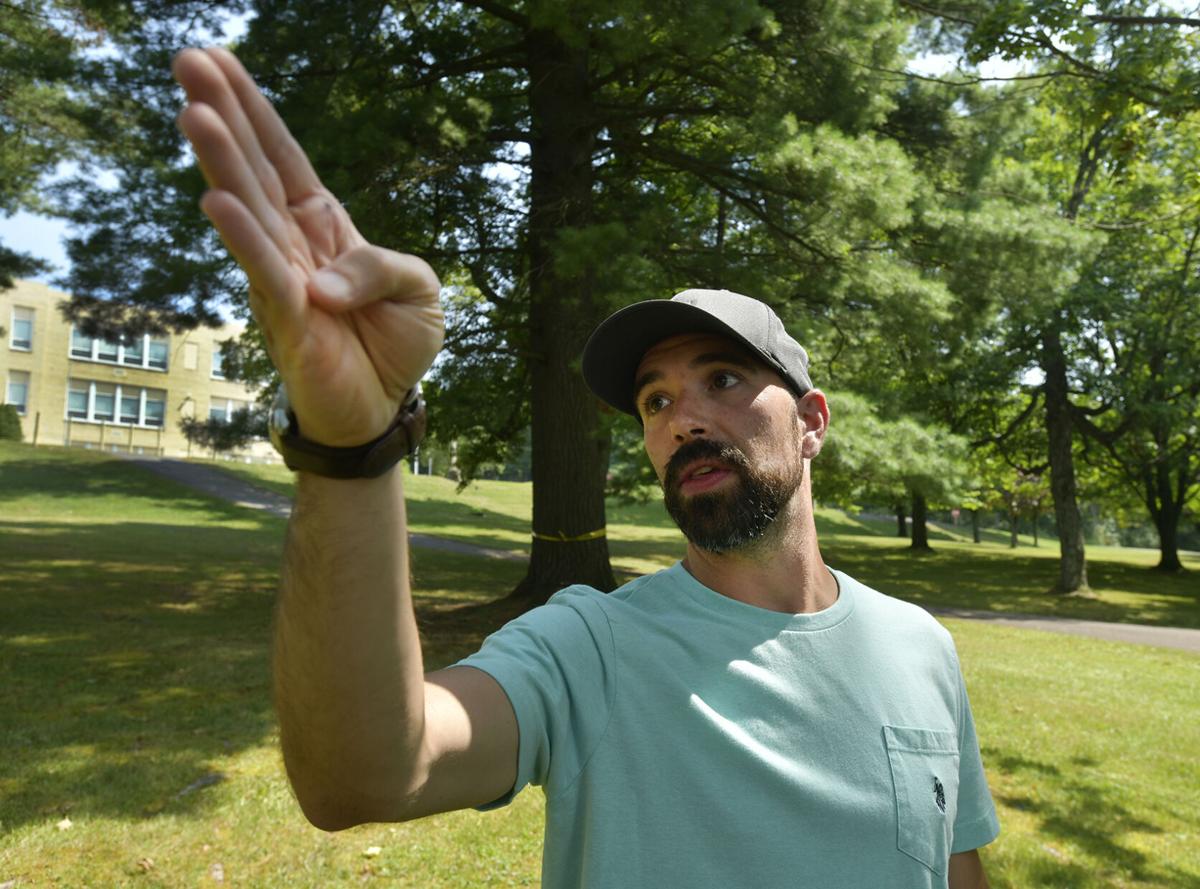 Shade-Central City High School history teacher Seth Walker points on Aug. 12, 2021, in the direction he and fellow classmates in room 306 at Shanksville-Stonycreek High School witnessed and heard the Flight 93 crash near Shanksville, Somerset County, on Sept. 11, 2001. 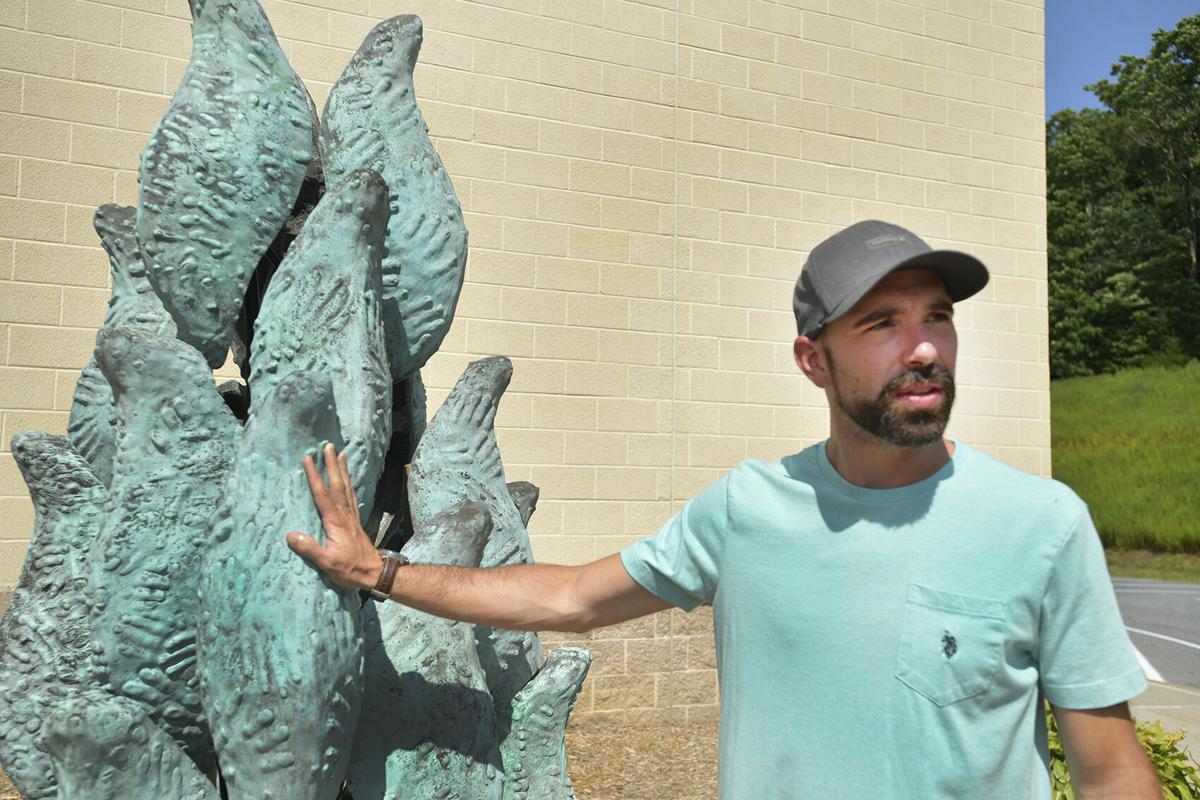 Seth Walker, a 2003 graduate of Shanksville-Stonycreek High School, places his hand on the Flight 93 Memorial Statue that is located at the front of Somerset County school on Thursday, August 12, 2021.

Katie Spiri, the choir and general music teacher at Berlin-Brothersvalley School District, was a junior at the high school when the events of Sept. 11, 2001 took place. For the past 10 years she's incorporated her experience into lessons on patriotism for her students. 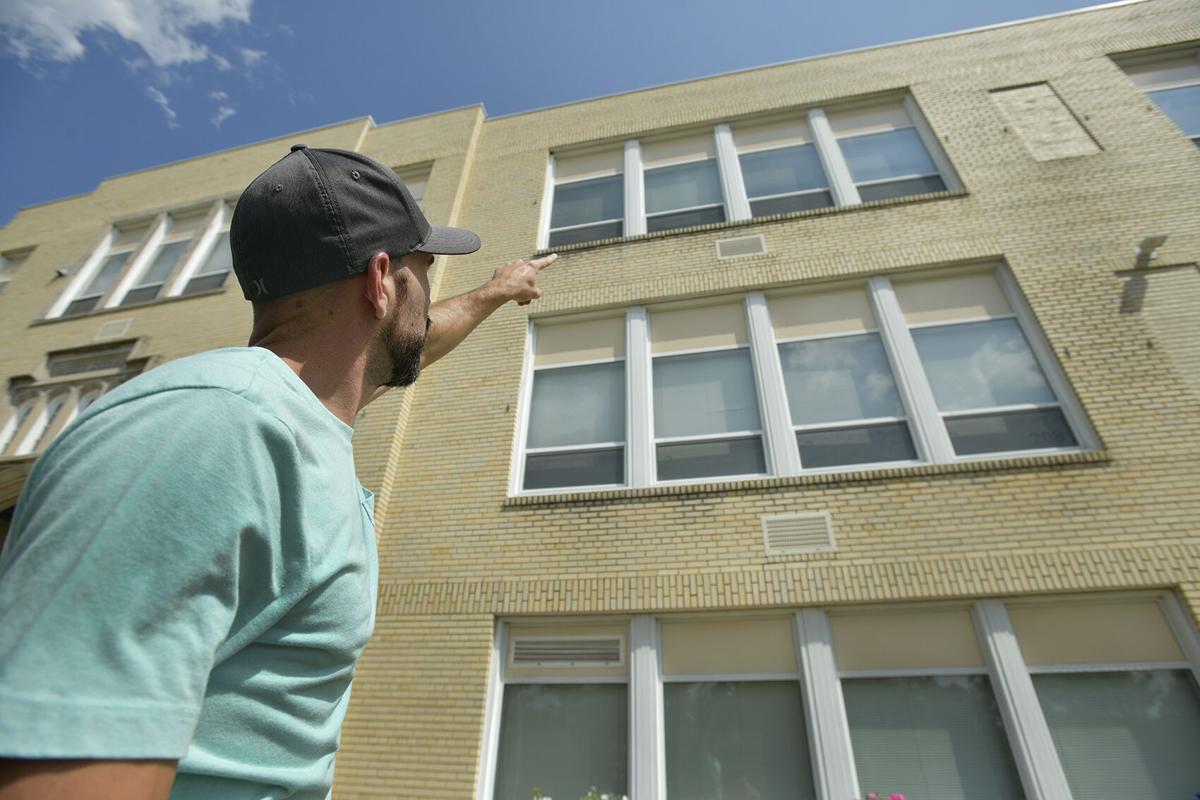 On Aug. 12, 2021, Shanksville-Stonycreek High School graduate Seth Walker points to room 306 at the school where he and fellow 11th graders looked out the windows on Sept. 11, 2001.

SHANKSVILLE, Pa. – Although 20 years have passed, Seth Walker can recall vividly which Shanksville-Stonycreek High School classroom he was in (306) and which class he was attending (English) when the news broke about the Sept. 11, 2001, terrorist attacks and when United Airlines Flight 93 crashed not far from the school.

“It was 8 or so in the morning – I can’t remember if it was first or second period,” he said. “We were in English, and the history teacher came into the class and said, ‘You have to turn on the news.’ ”

When the TV was tuned to the breaking report, the students saw a picture of the World Trade Center towers, one of which was billowing smoke, in New York City. Moments later, the entire class, along with millions of others, watched live as a second plane hit the adjacent tower.

Walker, who was a junior at the time, said that’s when the realization hit that this wasn’t an accident – that the United States was under attack.

With panic beginning to set in, he recalled hearing the sound of a jet engine go over the school, which wasn’t all that of an unusual occurrence, until the noise was followed by a “tremendous boom.”

Walker said: “It shook the school.”

He and his classmates rushed to the window of the third-floor classroom and peered out to see – about a mile away, above the tree line – a “huge black plume of smoke” rising from the site of an old strip mine, he said.

“Every kid was glued to the window,” Walker said.

United Airlines Flight 93 had been hijacked by terrorists who were fighting with a brave group of rebellious passengers. The plane came down near Shanksville, short of its believed target – the U.S. Capitol in Washington, D.C.

‘Felt the plane go down’

Katie Spiri was also a junior at the time at the neighboring district of Berlin Brothersvalley, about 12 miles away.

She didn’t see the plane or the smoke, but the events of that day are cemented in her mind the same way they are for Walker.

“I was in the band room and turned on the TV and saw, first, the World Trade Center being hit in New York,” the now 36-year-old said.

She remembered speaking with friends who had been on the road for driver’s education when Flight 93 went down and could see the smoke rising from the nearby town.

“They felt the plane go down when they were out in the driver’s ed car,” Spiri said.

Two decades later, both Spiri and Walker are educators – Spiri at Berlin Brothersvalley School District and Walker at nearby Shade High School – who use their personal experiences on Sept. 11, 2001, in their lessons around the anniversary of the attacks each year.

He also talks with his students about 9/11 and Flight 93.

When he first started sharing his experiences, he usually asked where the students were when the attacks took place, but today none of the learners in his class had been born then.

Now, he first introduces the eighth-grade students to the subject around the anniversary with questions about what they know regarding the historic events in their community.

The next year, he asks the ninth-graders why they think it matters that they learn the subject matter. In his final year with that group, he talks about all of the events and how they connect to other happenings in the 20 years since.

“Every time I tell it, it’s just, like, a chilling thing,” Walker said.

Despite that, Walker said he feels an obligation to his students to repeat the tale so they can hear a first-hand experience. The educator also opens the floor to questions – the most frequent being whether Flight 93 was shot down.

Walker said he uses the questions as teaching moments to instruct the students on corroborating sources.

Spiri, the choir and general music teacher at Berlin Brothersvalley, ties her story, the events of Sept. 11, 2001 and the anniversary of the writing of “The Star-Spangled Banner” on Sept. 14 into a class on patriotism each year.

“We always have some good conversation about that,” she said.

For her first- through sixth-grade students, she offers different lessons based on age level, but goes over the historic events and tells them her story. With older students in seventh through 12th grades, Spiri also touches on the musical “Come From Away,” which details the real-life events of 38 planes that were rerouted that day to a small town in Canada.

Walker recalls the scared look in his own teachers’ eyes as they tried to keep the students calm and comfort them, even as classmates trickled out of the school for their parents to pick them up.

When the then 16-year-old left the building, he drove toward his home.

But Lambertsville Road through Stonycreek Township was blocked by seemingly countless police and FBI personnel, he said, because that was the only access to the crash site.

Spiri’s father was a teacher at the Berlin school, so she left with him and her siblings, and talked with them throughout that evening.

All these years later, Walker said, he finds it odd that he can remember that day so clearly, while the weeks that followed are mostly a blur. What he does recall is police, federal agents and members of the media swarming Shanksville and how it was “an absolute zoo.”

Spiri said all she remembers is the “overwhelming” sense of patriotism that followed the terrorist attacks.

'Back in that sacred ground': Doomed Flight 93 aircraft's story a 17-year journey of extraction and investigation, then reburial at Shanksville

Terry Butler was prying a radiator from a minivan in a scrapyard on the morning of Sept. 11, 2001, when United Airlines Flight 93 flew low – “too low” – over his head.