A customer waits in line to pay her bill at Greater Johnstown Water Authority, 640 Franklin St., Johnstown, on Monday, Dec. 7, 2020. 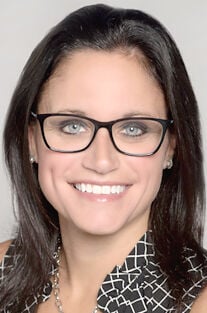 The money will be used for miscellaneous work that still needs to be completed, following years of neighborhood-by-neighborhood construction, as part of meeting the requirements of a consent order with the Pennsylvania Department of Environmental Protection.

“We are grateful to receive the $7 million loan from PennVEST,” said Melissa Radovanic, assistant manager of commercial, distribution and collections for RDM, which manages the GJWA. “Both PennVEST and the Greater Johnstown Water Authority have a strong working relationship.

GJWA’s sewer project was selected as part of a competitive statewide funding process.

“I’m glad to see that they were approved, they were able to get those monies.”

The water authority, which owns the sewer system, is required to reduce the flow to 625 gallons per day per equivalent dwelling unit or less by Dec. 31, 2022, in order to comply with the DEP agreement.

GJWA purchased the sewer lines from the City of Johnstown in 2020 for $24 million and the assumption of all obligations, specifically the consent order, and debt associated with the project.