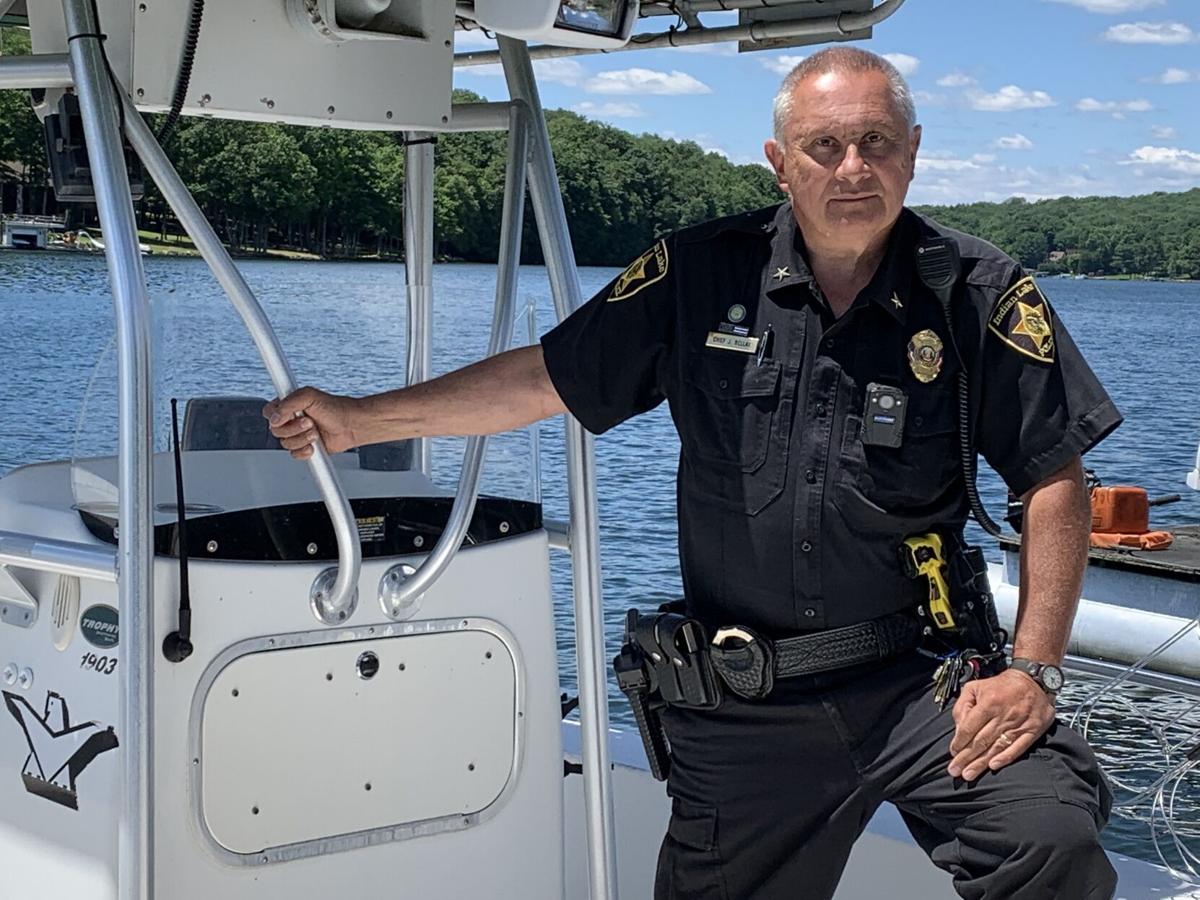 Jerry Bellak, Indian Lake police chief, poses for a photo on a boat on Indian Lake.

Jerry Bellak, Indian Lake police chief, poses for a photo on a boat on Indian Lake.

INDIAN LAKE – When Jerry Bellak was a young man growing up in Johnstown’s West End, he had big musical dreams.

“I’m a drummer,” he said. “When I got out of high school, I played in bands for weddings, and it was phenomenal. My big goal was to get on the cover of ‘Rolling Stone.’ ”

Bellak never made the cover of “Rolling Stone” magazine, but he’s is OK with that. Today, he beats a different drum as the chief of Indian Lake Borough Police Department.

He was hired to head up the Somerset County department in 2015 after retiring from West Hills Regional Police Department after 34 years as a full-time officer.

Bellak is a trained police sniper, paramedic and certified firearms instructor. He is a graduate of Greater Johnstown Career and Technology Center and the police academy. Bellak, a former candidate for Conemaugh Township supervisor, and wife Wendy have two grown children.

“I spent 21 years behind the bolt (action) gun as a police sniper,” he said. “I’ve been shooting handguns since I was 12.”

Bellak is a full-time police chief with three part-time patrolmen. State Rep. Jim Rigby’s name is on the roster. When he’s not working in Harrisburg, the former police chief for Ferndale Borough gives Indian Lake police a hand.

Police keep the peace in the borough, which has 400 full-time residents and 1,000 seasonal residents with a private lake and marina. The borough also has a rustic lodge with a restaurant open to the public and two public golf courses – Northwinds Golf Course and Northwinds Peninsula Golf Club, which was the first golf course designed by Arnold Palmer. On July 3, there will be a public fire works show at the marina.

When residents see Bellak drive by and their hands go up, it’s a friendly gesture.

“The residents are very friendly,” Bellak said. “They love this department.”

“One of Jerry’s biggest advocates is a woman who has health issues and needs supplies delivered during the winter, which is problematic,” Hanson said. “Jerry takes the Hummer and loads up supplies and delivers them to her house. She sends him pictures and gives him donuts.”

For Bellak, such courtesy is part of the job and part of his life.

“I’m geared toward protecting and serving our residents,” Bellak said. “I tell my officers that failure is not an option.”

The department has two SUVs and a military Hummer. Department firearms include an AK-47 rifle, four M16 rifles and four M14 rifles. Bellak, who carries a .45 Colt on his hip, said it’s a stash he hopes to never use. The weapons came through a military program at no cost to the borough, he added.

“We’ve got a lot of firepower,” Bellak said. “The bottom line is, I would rather have the most that we may never need, but if something bad goes down, my officers are going home.”

The department also has a patrol boat on the lake to watch for speeding boats and drunken boaters. Alcohol and boating don’t mix, Bellak said.

“Accidents can happen quickly, whether you’re on a boat or driving a car,” he said.

Police are on the prowl for poachers.

“There’s no hunting in the borough,” he said. “When people see all the deer and turkey, they think they can come in and hunt illegally. We deal with that, and people have been arrested.”

ATVs and snowmobiles are allowed on borough roads if they are properly registered and tagged – and if the rider has a helmet and driver’s license. No golf carts are allowed.

Shanksville-Stonycreek School District is less then three miles from Indian Lake. It’s in the state police’s jurisdiction, but Bellak and his officers patrol school grounds.

“I have my officers go down during basketball and volleyball games,” he said. “They’re inside when people are coming in and we have full arrest powers.

“A lot of residents have their children down there,” Bellak said. “If something happens during the school year, maybe an active shooter or disorderly person, Indian Lake is responding. After the school year, we make sure there is no vandalism.”

Bellak holds firearm safety classes for residents and Halloween events for children. Police work is a vocation he cherishes and he has no plans to retire.

“I would sign up all over again,” Bellak said. “I’ve never changed my mind on that. I truly love my job.”

Front Lines is a monthly feature profiling individuals who, as first responders, help others in a crisis. They may be police officers, firefighters, paramedics, emergency medical technicians or volunteers. Suggestions for Front Lines can be emailed to Patrick Buchnowski at pbuchnowski@tribdem.com.

Retired Johnstown police captain Jeff Janciga is building a police force from the ground up.