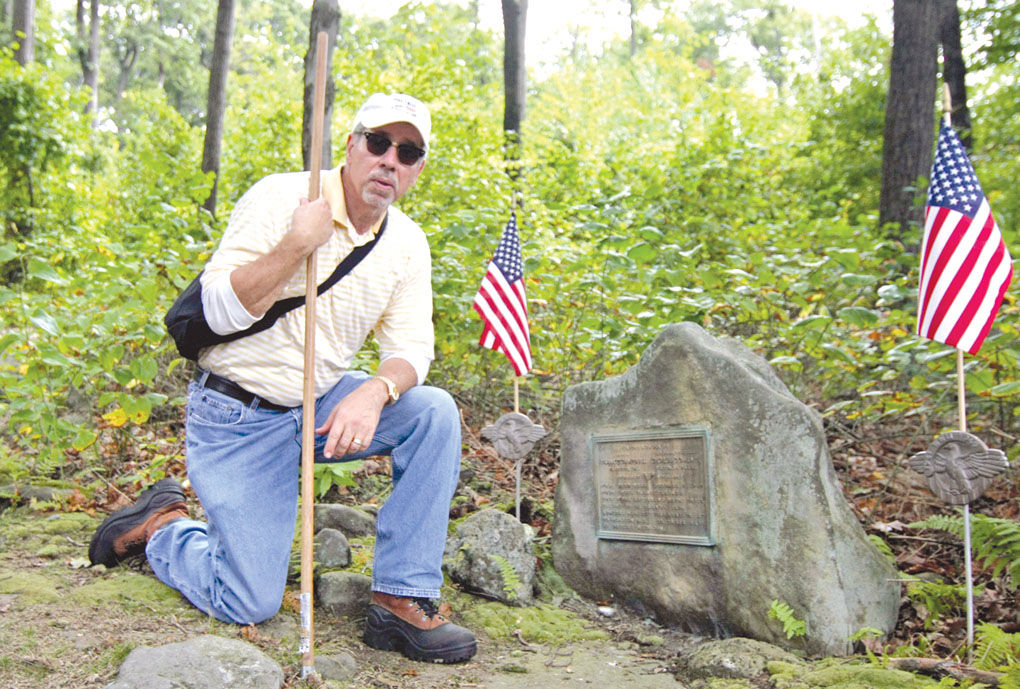 Up the mountain three miles beyond Waterford, Ray Cohlmia of Oklahoma City took out his cellphone and called his sister, Elsie Simon, in Clinton, Okla.

Cohlmia, 83, finally found closure to a family tragedy that happened nearly 67 years ago.

He made the call from a clearing in the forest at a memorial to his brother, Petty Officer George A. Cohlmia, who died with Ensign Frank J. Campbell when their U.S. Navy dive bomber crashed on Oct. 9, 1945.

The remains of the engine are still embedded in the ground.

“It’s unbelievable,” Cohlmia told the Bulletin. “This whole excursion is beyond words.”

Cohlmia, who practices dentistry, and nine other family members flew into Pittsburgh on a recent Friday. The next day they were taken to the remote crash site in Ligonier Township, near what’s called Sugar Camp Hill. They were led by Mike Johnson of Ligonier Township, who saw articles in the Bulletin about the family’s search for the crash site and volunteered to take them. His wife, Lynn, came along to see the memorial that Johnson often spoke of.

They were accompanied by Cliff Riffle and Gary Riffle, son and grandson, respectively, of the late Tom Riffle, who led the recovery party in 1945, and Jim Wolford, grandson of the late Rev. W.E. Wolford, who corresponded with and later visited the Campbell and Cohlmia families.

Tom Zangla of South Greensburg also was there, and it was Zangla who in 2008 laid the foundation for the first leg of the Cohlmia family’s unexpected journey.

The saga began for him 30 years ago when a fellow hunter took him to where the Curtiss B2C-4E Helldiver crashed. It was one of 21 planes in Bombing Squadron 97 returning to their air base in Grosse Ile, Mich., after taking part in a postwar celebration in Washington, D.C. It was foggy around noon when the planes passed over the Laurel Highlands. Witnesses who looked up at the sound of so many aircraft saw one of three in formation take a sudden nosedive, crash into the forest and burst into flames.

Tom Riffle, who witnessed it from his home in Waterford, said that he saw a person on the wing of the falling plane. And according to descriptions of the recovery scene, the pilot died in the fiery crash, but Cohlmia’s body was about 50 feet away.

Zangla returned two more times, the last about 20 years ago, and took photographs. He put them aside until he retired and began a serious search for information about the incident. He found news of the crash in the archives of the Bulletin, and located the Cohlmia family, but not the Campbells, through an Internet search. He sent his photos and copies of the newspaper accounts, but since the Cohlmia family is very extended, not everyone knew about his correspondence and photos.

“There were 10 of us, but only Ray and I are left,” Simon, 84, said. “The oldest was Florence, then there was Josephine, Fred, Velma, Gordon, Margaret, George that was killed, myself, Ray and Woody. We were all very close.”

Josephine was the one who had contact with the local people in the 1940s, and she kept all the letters and mementos that included leaves and rocks from the crash site. She died several years ago. When Florence died in June, Josephine’s son, Ted Shadid, a retired military officer from Rhode Island, brought the memorabilia to the funeral.

“We’re going to Pennsylvania,” he told his nephew George A. Cohlmia (son of Gordon), who was named after the uncle he never met. They contacted Zangla, and Ray and George came to Ligonier in late July. But the area had changed so much from timbering that Zangla couldn’t find the crash site again.

Johnson read the articles about it in the Bulletin, called Zangla and said he knew exactly where it was. He offered to lead them there.

The group had official approval to travel the game commission’s steep and rough road to a parking area near state gamelands. After a short hike, they entered a gate through deer exclosure fencing and began the descent down the mountain.

The family members included Shadid, George Cohlmia and his son Adam, Ray and his wife Sameera, and their daughter Lana Cohlmia and her 13-year-old daughter Aubrey Haddon; son Matt, and son Raymond Jr. and his son Derek. Both sons and grandson Adam are dentists.

The descent was slow and when it became even more difficult, Matt Cohlmia picked up his mother and carried her on his back. There was a quiet jubilation and triumph when the group arrived at the memorial and the remains of the plane. There were tears and smiles, too.

Jim Wolford had been there in the 1940s when his grandfather and other local men took the metal plaque into the forest and cemented it to a rock.

“It was my grandfather’s project, and he came back every year to clean it up and put up new flags,” he said. “He used to get me out of school to go with him.”

Wolford later took over, but hadn’t been there for years because of health issues.

During the recent visit, Johnson polished the monument and put up fresh flags.

George said a prayer of gratitude for the family’s opportunity for closure, and for the people in the area who helped them.

Shadid called the journey “a remarkable kinship that was born 67 years ago and that was renewed,” in reference to Zangla reaching out to people he never met in Oklahoma, Johnson stepping in, and the incident coming full circle with the son and grandsons of men who were there in 1945.

“I think it was really cool to experience something like this at my age,” Haddon said. “I’m happy for my grandfather and I’m happy that I got to see this with him.”

Zangla is no longer disappointed that his first attempt to get to the site failed.

“I’m glad we accomplished this,” he said. “It turned out to be something really special, even more so since they brought the rest of the clan with them.”

But that day might not have been the end because Ray Cohlmia plans to return.

“I know we’re coming back next year,” he said. “We have other family members who want to see it, and they are ready to go. I’m exhausted from the trip, but I’ll do it again.”