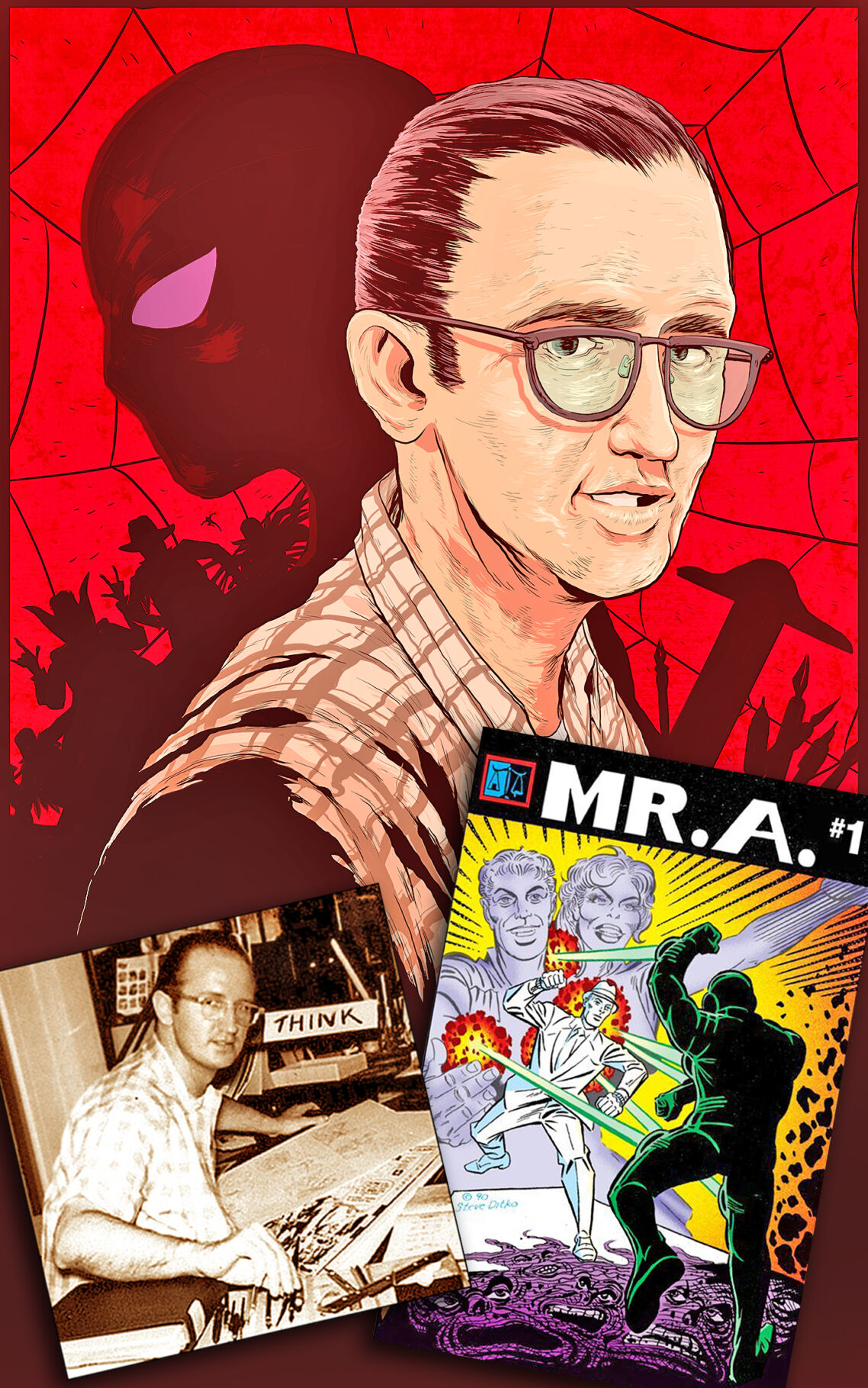 Exhibits and special activities celebrating the life and works of Steve Ditko, a Johnstown native and co-creator of Spider-Man and his cast of supporting characters and villains, will be showcased beginning July 15 at Bottle Works in the Cambria City section of Johnstown. 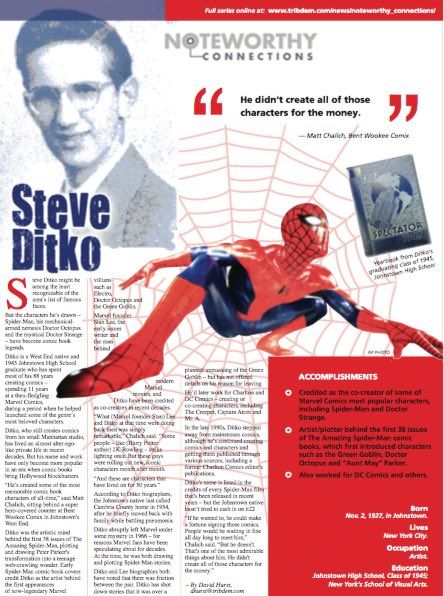 Steve Ditko is a West End native and 1945 Johnstown High School graduate who has spent most of his 88 years creating comics – including 11 years at a then-fledgling Marvel Comics, during a period when he helped launched some of the genre's most beloved characters. 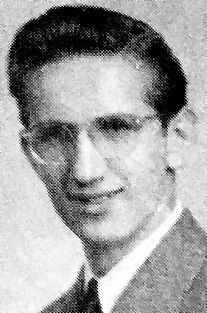 Exhibits and special activities celebrating the life and works of Steve Ditko, a Johnstown native and co-creator of Spider-Man and his cast of supporting characters and villains, will be showcased beginning July 15 at Bottle Works in the Cambria City section of Johnstown.

Steve Ditko is a West End native and 1945 Johnstown High School graduate who has spent most of his 88 years creating comics – including 11 years at a then-fledgling Marvel Comics, during a period when he helped launched some of the genre's most beloved characters.

This exhibit celebrates a Johnstown native whose stories and characters in comic books and movies are legendary.

“Hometown Heroes – Steve Ditko Exhibition” will be displayed July 15 through Sept. 11 in the main galleries at Bottle Works, 411 Third Ave., in the Cambria City section of Johnstown.

The retrospective showcase will honor the trailblazing artist and creator in the comics field.

Ditko is credited as the co-creator and original artist behind Spider-Man and working for Marvel Comics, DC Comics and other publishers.

The exhibition of Ditko’s life and work is a collaboration with the Ditko Estate and Marvel Comics.

“This exhibit is all about the community,” said Matthew Lamb, Bottle Works’ creative director.

“In raising awareness of Steve’s accomplishments, we want to encourage community pride in this hometown hero and to all the local heroes that are yet to come. Steve showed us what we can do – with our shared appreciation of this town and its spirit – to make our dreams come true.”

Aside from being one of the creative forces behind Spider-Man and his cast of supporting characters and villains, Ditko had his hand in making many other iconic comic book characters, such as Doctor Strange, Squirrel Girl, The Question, Mr. A. and The Creeper.

He also wrote, penciled and inked countless stories for the leading publishers in the field, constructing a body of work that has influenced generations of comic artists, filmmakers and TV producers.

“This eight-week exhibit will feature artworks from his formative years and decades-long professional career,” Lamb said.

“The show will not only highlight him as an artist, but visitors can learn more about the man behind the art.”

The exhibit will include 50-plus pieces.

“Unfortunately, most of Steve’s original work has been lost to the ages, but there are some pages that exist and we have a few that will be on loan from collectors and their value is pretty incredible at this point,” Lamb said.

“Most of what we are working with are prints and production art. It also was a matter of reaching out to Marvel Comics and they were willing to work with us and I got permission to use images and make prints to showcase his work.”

“We have some that are just Steve’s pencils of the original outlines of the work, some of his finished ink works, some black-and-white images and some prints that are the fully published color images, so we have a lot of options throughout his comic career,” Lamb said.

In addition, the exhibit will include family heirloom and artifacts that belonged to Ditko.

“He started working in comics, even before Spider-Man was created, in the late ’50s, early ’60s and he never stopped,” Lamb said.

Lamb said in addition to showcasing Ditko and his Johnstown roots, the exhibition is good for the city, bringing in people who want to see it.

“There’s comic book fans all over the world who have been reaching out and asking questions,” Lamb said.

“I got emails this week alone from people in Brazil and France wondering about the exhibit. Our website has taken more hits in the last two months since the announcement than it has in some time.”

For those who see the exhibit, the hope is they’ll gain a better understanding of Ditko’s talent.

“A lot of what we’re looking to show is the progression of Steve’s work and his career as a whole,” Lamb said.

“If someone’s a dedicated Spidper-Man fan and knows his work from that, they might be unaware of his other works throughout the years and this will showcase that.”

To celebrate the exhibit, a VIP opening reception will be held July 24 for Ditko family members, supporters and those in the comic book industry.

A public reception will be held from 5 to 9 p.m. July 30 as the kickoff to Bottle Works’ Folk & Arts Festival.

In conjunction with the exhibit, Bottle Works has planned additional events and activities to be held throughout the duration of the show.

“It started as just the exhibit, but once the outpouring of support came, we realized we needed to do more and add additional events,” Lamb said.

Bottle Works is giving artists an opportunity to express how Ditko’s works inspired them in a community-curated exhibition titled “Ditko Inspired Exhibition,” which will be showcased with the main exhibit.

“With Steve’s work in the industry, he’s inspired a lot creators who came after him, so we decided to do a complimentary exhibit showing how he inspired them,” Lamb said.

“A lot of the submissions that are being turned in are comic book art, but I have a few that show his inspiration, but they’re not Spider-Man- or comic book-related.”

Artists were encouraged to create and donate original pieces of work or high-quality prints.

Pieces will be available for purchase with a portion of the proceeds to benefit the Hero Initiative, which provides a financial safety net for comic creators, who may need emergency medical aid, financial support for essentials of life and an avenue back into paying work, and future Ditko projects at Bottle Works.

In addition to the donated art, Bottle Works asked artists to record 1- to 2-minute videos or provide written testimonials, explaining how Ditko’s works influenced them.

The testimonials will be combined with interviews from Ditko family members and industry professionals that will run on a loop during the exhibit.

“This exhibit will have a minimum of 30 pieces,” Lamb said.

“It is really cool because the artists want to support what we’re doing by donating their pieces.”

Ditko-themed murals will appear at the Stone Bridge Brewing Company in downtown Johnstown and the Tulip Building at Bottle Works.

“We’re looking to expand our public art, and we thought if we’re going to honor Steve Ditko, let’s not stop at the exhibit,” Lamb said.

“Let’s get some murals put up so that we can continue to influence people and show his importance,” Lamb said.

The murals will feature Ditko’s work.

“The images will be digitally printed on a parachute fabric and then we’ll be able to do community paint days, where anybody can come and do a little bit of paint by numbers,” Lamb said.

“Some area artists will do touch-ups and whatever else needs to be done to finalize it before installing it on the wall.”

He said they are waiting for final approval from Marvel Comics on the design and would like to have the mural installed at Stone Bridge Brewing Company before winter.

“When I initially reached out to Marvel about a public mural, the answer was no,” Lamb said.

“I was told they don’t approve public murals anywhere, but the fact they came around and said because it’s Steve’s hometown, maybe they’ll approve it,” Lamb said.

“We may end up having the only approved mural in the entire country.

“That would be pretty great.”

Once everything is finalized, public painting dates will be announced.

“I hope this brings awareness and continues Steve’s story, and I think it will be great that the community gets to take part in this,” Lamb said.

“Ten years from now, people can be driving by and tell their kids they took part in painting that mural.”

“Ditko,” a play chronicling his life and times, will be presented at 1 p.m. July 25 at the State Theater, located inside Conemaugh Health System’s Lee Campus on Main Street in downtown Johnstown.

The play was written and directed by Lenny Schwartz and had its debut in New York City in 2019.

“When I reached out to him (Schwartz), he was very gracious and thrilled that we were interested.”

The play will be staged by Pitt- Johnstown’s Theater Arts Department.

“It’s a bit of a tongue-in-cheek retrospective of his career, “ Lamb said.

“If you do any research on Steve, you know he was a very private person, and there’s not a whole lot out there known about who he was as a person, so that’s what the focus is. This play does a nice job of talking about his career and how it played out.”

Tickets are $18 for Bottle Works members and $20 for nonmembers and can be purchased online at www.bottleworks.org.

A second showing of the play is being finalized.

There is no admission to attend the exhibition.

Where: Bottle Works, 411 Third Ave. in the Cambria City section of Johnstown.

The following activities will be held in conjunction with the “Hometown Heroes – Steve Ditko Exhibition”:

• “Ditko Inspired Exhibition” will be showcased with the main exhibit and feature pieces from local and regional artists who have been inspired by Ditko. It will include a 1- to 2-minute video or written testimonial, explaining how Ditko’s works influenced them. The testimonials will be combined with interviews from Ditko family members and industry professionals that will run on a loop during the exhibit.

• A public art piece will be installed honoring Ditko’s legacy. Murals will appear at the Stone Bridge Brewing Company, downtown Johnstown, and the Tulip Building at Bottle Works. Public painting dates will be announced when plans are finalized.

• “Ditko,” a play chronicling the life and times of Ditko, will be presented at 1 p.m. July 25 at the State Theater, located inside Conemaugh Health System’s Lee Campus on Main Street in downtown Johnstown. Tickets are $18 for Bottle Works members and $20 for nonmembers and can be purchased online at www.bottleworks.org.

The following activities will be held in conjunction with the "Hometown Heroes – Steve Ditko Exhibition":