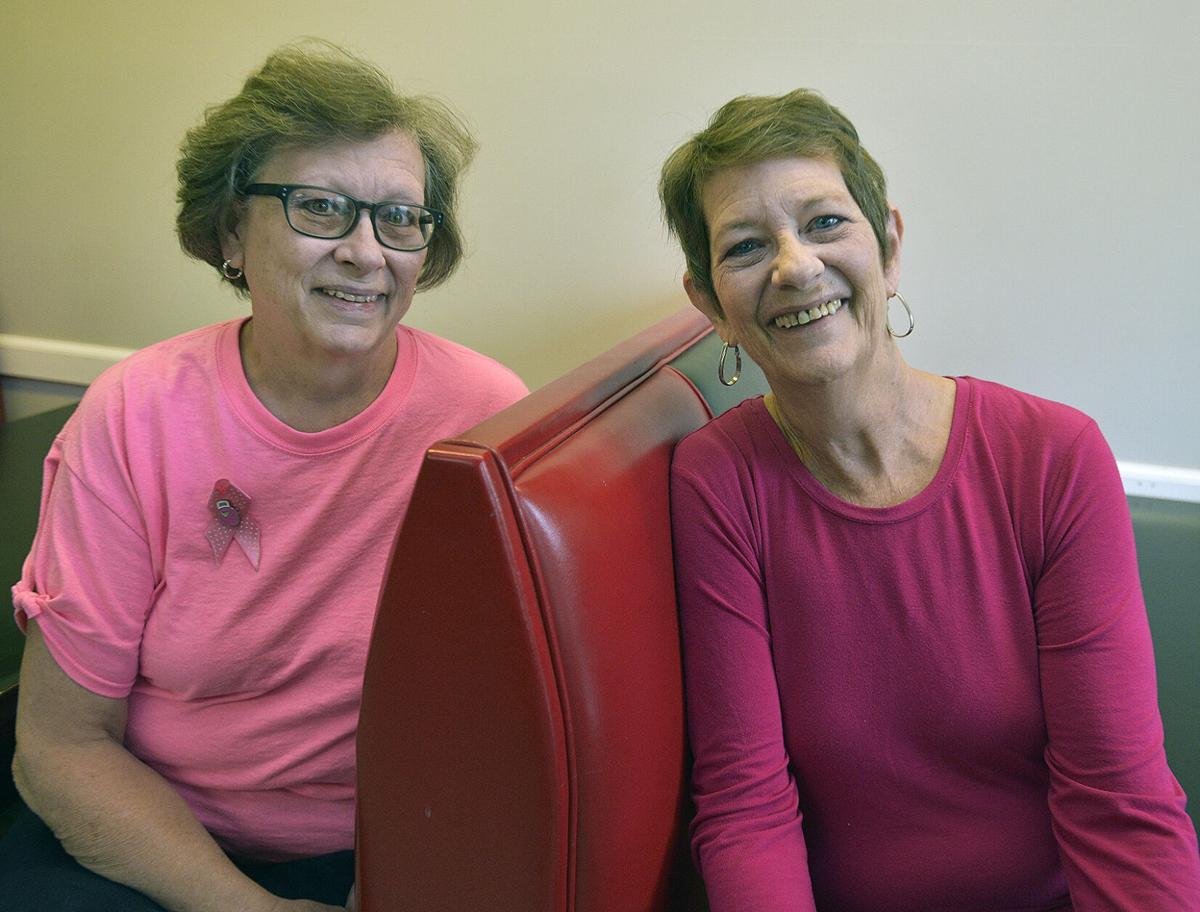 Breast cancer survivors and sisters l-r Claudia Cotchen and Cindy Conner pose for a photo at the Tomahawks Deli and Grill in Davidsville on Wednesday, Oct. 27, 2021. 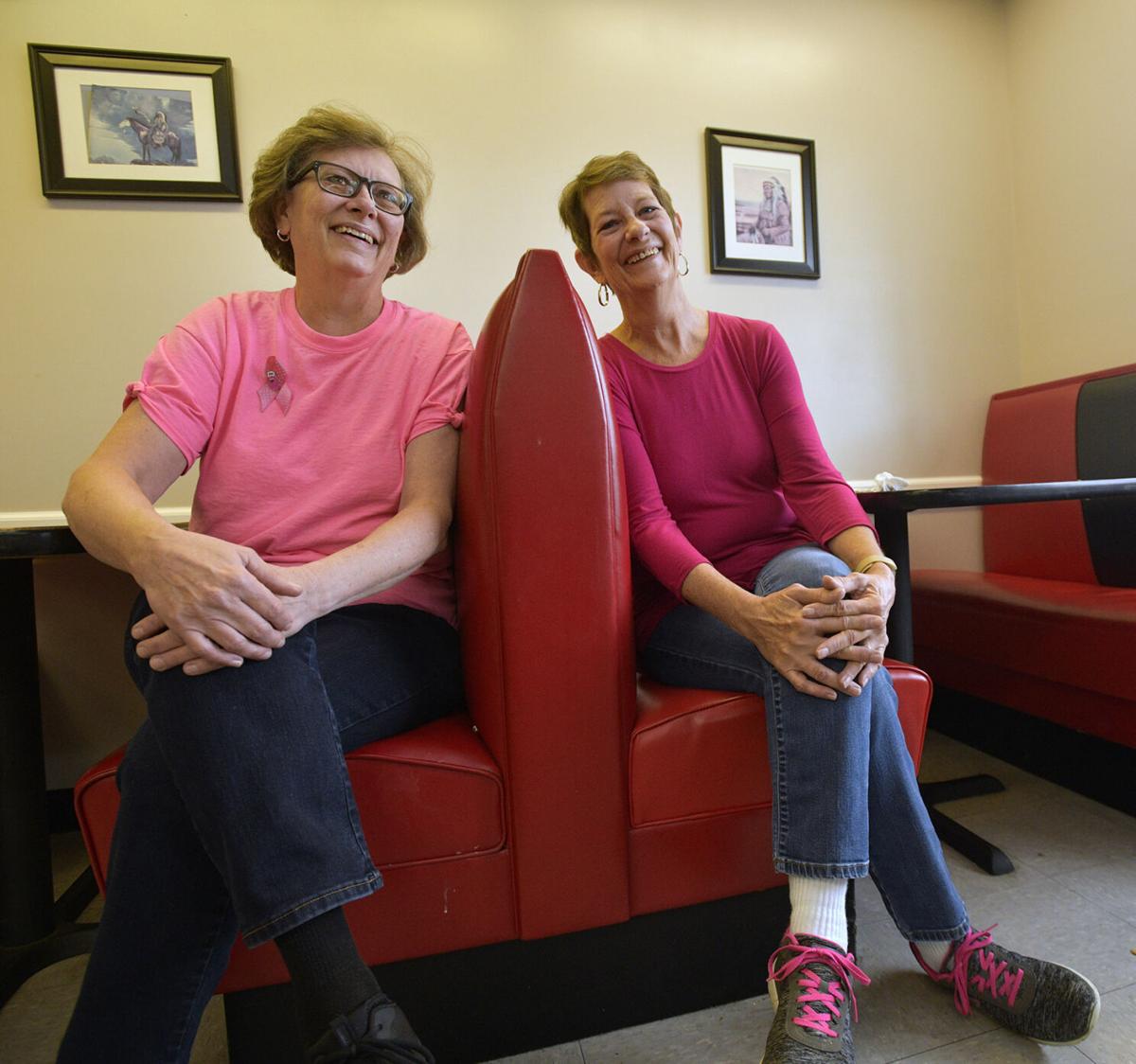 Breast cancer survivors and sisters l-r Claudia Cotchen and Cindy Conner pose for a photo at the Tomahawks Deli and Grill in Davidsville on Wednesday, Oct. 27, 2021.

DAVIDSVILLE, Pa. – Every year in October, sisters Claudia Cotchen and Cindy Conner wear pink for 31 days to do their part to raise awareness of breast cancer.

The Hollsopple residents are breast cancer survivors, and the small act serves as a reminder to other women to get their mammograms.

“Absolutely get that mammogram every year, and if you think there’s something there, ask questions,” Cotchen, 64, said. “It could be nothing, but it also could be something.”

In 2006, Cotchen said she felt a lump in her right breast after leaning on a table.

“I went to get my mammogram and didn’t tell anybody because I thought maybe I was just being hinky, but there it was,” she said. “They took me in for an ultrasound and I just knew, but it didn’t really scare me. It was there and now we needed to deal with it and take care of it.”

After it was determined to be cancer, Cotchen had a lumpectomy and an axillary dissection, where 18 lymph nodes were removed, all of which were negative but one.

“After I healed up some, I started radiation with Dr. (Michael) Voloshin. So every morning – for 31 days – I went down and got my treatments and then I went to work,” she said.

Radiation was followed with five years of taking Tamoxifen.

“Up until two years ago, I still had to have a diagnostic mammogram, but now I go once a year for a mammogram screening, and I still see Dr. Stefanick and Dr. Voloshin,” Cotchen said.

Throughout her diagnosis, she said she kept a positive attitude and didn’t let the cancer interfere with her life.

“When they told me I had cancer, I didn’t feel any differently today knowing that I had cancer than I did yesterday before I knew it,” Cotchen said. “I’m just not one to get all panicky about stuff. You have to keep going and moving, and working every day was my out.”

Conner, 63, said her breast cancer diagnosis came about in 2015 after an appointment with her gynecologist.

“I was asked when was my last mammogram and I said, ‘I never had one,’ ” she said.

Conner said in the late 1980s, she had two benign cysts removed from her right breast and was told because she had smaller breasts that she would probably find any lumps before a mammogram could pick it up.

“This was before all the technology we have today,” she said.

“But I felt it was OK. When she (Claudia) was diagnosed, I thought hers isn’t hereditary so I wouldn’t have anything to worry about.”

Upon her doctors’ instance, Conner had a mammogram and it discovered the cancer.

“It was in the lower quadrant of my left breast and it was in toward the chest wall, and I was told I would have never felt that being as far in as it was and it was very small,” she said.

“But had I not gone, who knows where it could have spread to.”

Following an appointment with Stefanick, Conner underwent a biopsy that determined the cancer to be Stage 1.

“I had a lumpectomy, and one lymph node was removed and it came back negative,” she said.

Conner met with Dr. Ibrahim Sbeitan, who told her the type of cancer she had usually doesn’t metastasize and they got it all out, so she was considered cancer-free.

“I did have to go through 20 rounds of radiation. So for four weeks – every day after work – I went for radiation treatments,” she said. She also took Arimidex for five years.

“I see Dr. Stefanick yearly, and I’m getting my mammogram once a year,” Conner said. “Now I say, ‘Even if you’re a small person you need to get a mammogram because even if you think you’ll find it, a mammogram will find it a whole lot faster.’ ”

The sisters, who work together at the Thomahawk Deli & Grill in Davidsville, said they leaned on each other for support.

“We would talk about it and keep each other going,” Cotchen said.

“You have to have somebody there to push you a little bit sometimes,” Conner said.

For women diagnosed with breast cancer, the sisters agree that you have to face it head-on.

When Lisa McMahan went through breast cancer treatment in 2018 – the tests, the chemotherapy, the surgeries – she had one clear message for her doctors.