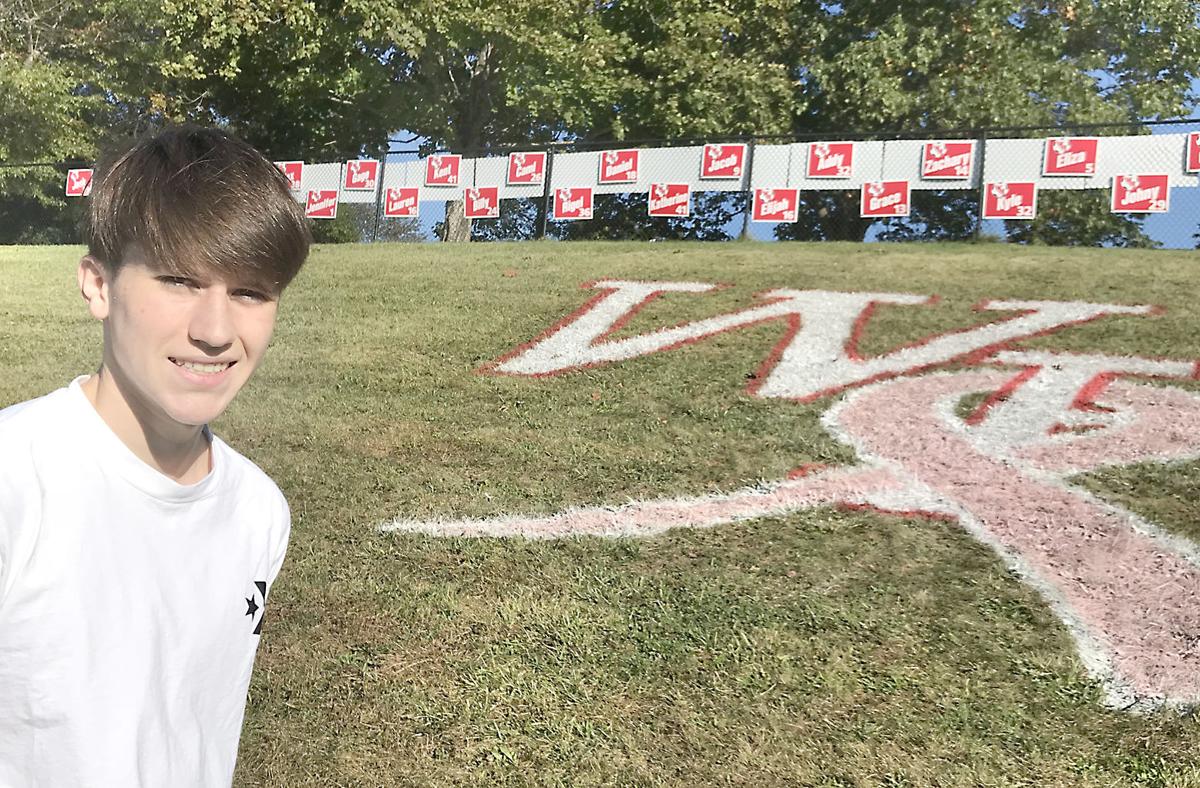 Connor Oechslin stands by a pink breast cancer awareness ribbon painted on the hillside above the Westmont Hilltop soccer field on Tuesday, Oct. 10, 2019. Connor, a sophomore at Westmont and a member of the Hilltoppers boys soccer team, is the son of the late Taunia Oechslin, who founded the successful local Girls Night Out event to benefit cancer research. 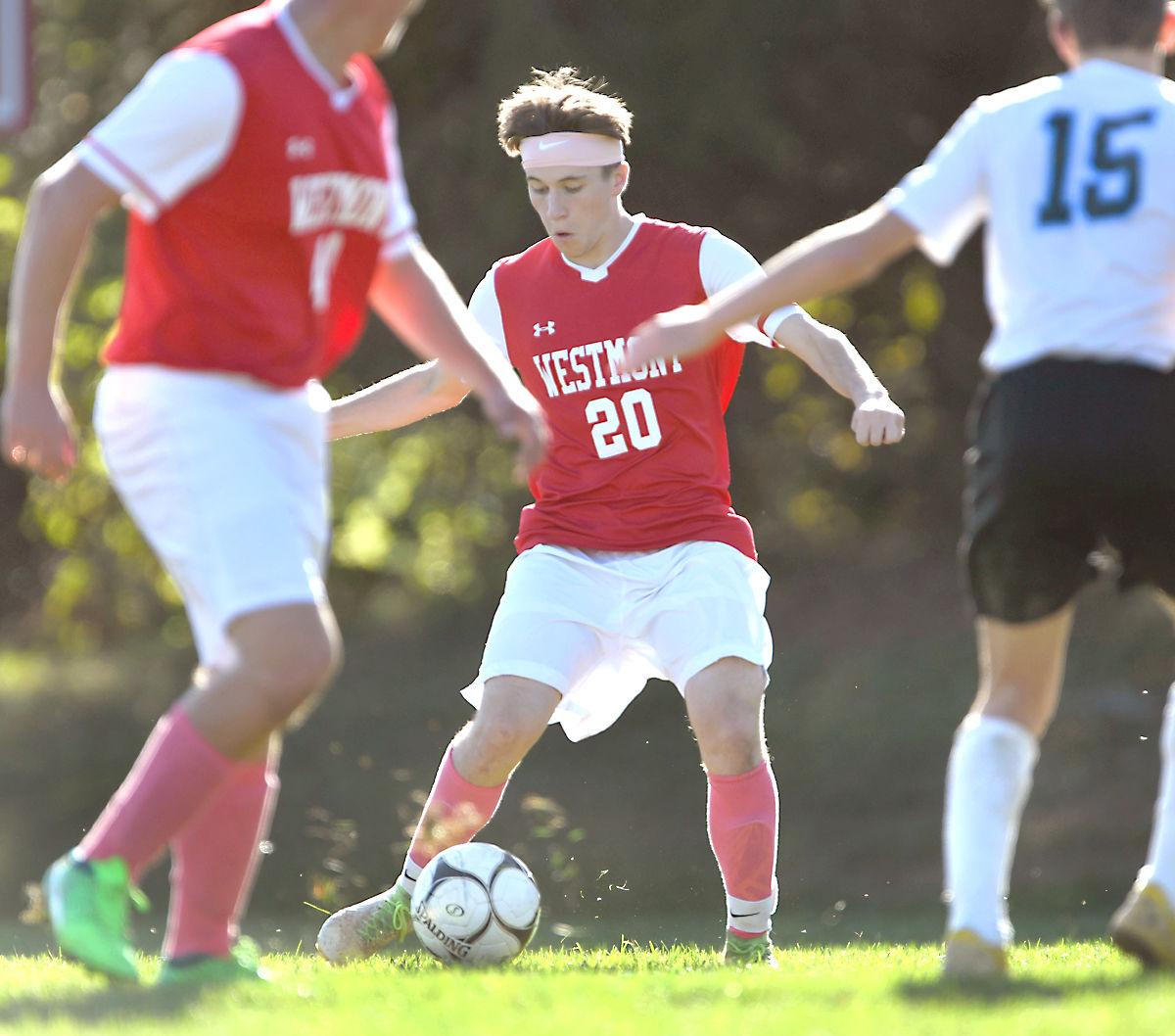 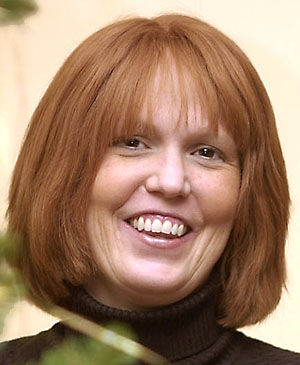 Taunia Oechslin died in April 2009 after a three-year battle with cancer, but her memory lives on with the annual Taunia Oechslin Girls Night Out event.

Connor Oechslin stands by a pink breast cancer awareness ribbon painted on the hillside above the Westmont Hilltop soccer field on Tuesday, Oct. 10, 2019. Connor, a sophomore at Westmont and a member of the Hilltoppers boys soccer team, is the son of the late Taunia Oechslin, who founded the successful local Girls Night Out event to benefit cancer research.

Taunia Oechslin died in April 2009 after a three-year battle with cancer, but her memory lives on with the annual Taunia Oechslin Girls Night Out event.

Taunia Oechslin died in April 2009, after a three-year battle with cancer, and her husband, Brian, told their young son that the two of them would stay in Johnstown for a maybe a year “and see what happens.”

A decade later, they’re still here, surrounded by supportive friends and family – and Taunia Oechslin remains the face of the breast cancer awareness movement across the region.

While fighting the disease, Oechslin had launched Girls Night Out – a local breast cancer awareness event that drew a couple hundred women and raised about $20,000 in 2007.

The gathering has since soared past attendance of 800 annually and more than $1 million raised, and now bears her name – Taunia Oechslin Girls Night Out – as does a foundation that provides funding to Joyce Murtha Breast Care Center in Windber for treatment grants and medical equipment.

Connor grew into a 15-year-old sophomore at Westmont Hilltop High School, where he plays on the soccer team.

He keeps a picture of his mom on his nightstand – along with a photo album his grandparents gave him that tracks Connor’s moments from his birth through his mother’s funeral.

“At the time, obviously, since I was 5, I didn’t really have an understanding of what she was doing, but I knew what she was going through,” Connor said in an interview at the high school on the day he and the Hilltoppers played their “pink” soccer game for breast cancer awareness.

“I remember the day ... My grandma flew in from Philly. And I was in my dad’s bedroom and I was just lying there waiting for him to get home,” Connor said. “And he came home and he didn’t even say anything. He just hugged me. And he was like, ‘It happened.’ And I got upset obviously, because I love my mom very much. We just talked about it for a while.”

Connor Oechslin couldn’t escape his mother’s legacy even if he wanted to.

Each October, during National Breast Cancer Awareness Month, and each April, when the Girls Night Out banquet is held, her spirit inspires more women to have cancer screenings, moves hundreds to donate money to the cause, and paints the community bright pink – including the front page upon which this story was printed.

“I feel like ... she wasn’t really thinking about herself. She was thinking about everyone else,” Connor said. “From what I was told, she wanted to start this fundraiser for other women who had breast cancer, to support them. That’s how my mom was. She was a very kind person, and she always put others before herself.”

Brian Oechslin said he and his son help out at the Girls Night Out each year. But Connor said he was probably in seventh grade when the significance of the moment really hit home for him.

“I only went for an hour. I didn’t go for long. But I just wanted to go and see everything,” he said. “Everyone came up to me at the fundraiser and they were just talking to me and I had a really good time. I love that fundraiser. I help set up for it every year. It’s just a great cause – to see everyone support my mother. It just brings joy to my heart.”

Meghan Stahl-Skinner, president of the Taunia Oechslin Girls Night Foundation, said Connor is “a great help to the committee and we love seeing him take an active role in helping to pay it forward for his mom.”

Stahl-Skinner added: “Connor is just like his mom and nothing is going to stop him from taking an active role in things he is passionate about, especially fundraising for breast cancer awareness.”

Connor said he is glad that so many women get together, dress up and have a good time – for a great cause – in an event named for his mom.

“That’s who she was. She could go into a room and make everyone happy,” Connor said. “I feel like that’s what she’s doing, even though she’s not here physically. Every time all those women get together and they have a good time ... and they raise money for a great cause. That’s what she wanted.”

Last year, when Connor was a ninth-grader at Valley School of Ligonier, he organized a community service project to benefit Girls Night Out.

“They (Girls Night) were trying to get to $1 million, and I wanted to contribute my part into it, because she was my mother,” Connor said. “I got a ton of kids at my school to help me, and we raised $2,200. And, for how small my school is – my school only had 200 kids in the entire school – so it was a really good fundraiser and I was very happy. Everyone in my class was super supportive of everything. It was just a nice time for me to, I guess, contribute my part.”

A breast cancer ribbon had been painted on the hillside above the field, and donations were collected for the Girls Night Out project.

Lynn Clement, principal at Westmont Hilltop Junior-Senior High School, said she has attended Girls Night Out events since 2007, and was inspired by Taunia Oechslin’s passion and will – a decade before Connor enrolled in her school.

“I’ll never forget meeting her, just being in awe of her and being moved by her mission,” Clement said. “She had an impact on me, for sure.

“What’s bigger than paying it forward? It’s incredible. It’s a movement, and it feels like the whole Johnstown community is behind it.”

‘Faced it head on’

When his mother died, Connor was in kindergarten at Our Mother Of Sorrows school in Westmont.

He remembers going outside with his classmates to plant a tree in Taunia’s honor.

“We fertilized it the whole year,” he said. “The last time I was there was in seventh grade. And it was still there, and it was really big.”

Not every day has been easy.

“Growing up, when he wanted to talk about Taunia and Mommy, we would talk,” Brian Oechslin said. “We’ve faced it head on. ... Recently we’ve had more in-depth conversations about it.

“It’s hard for any child to go through. But Connor has known three other kids who lost parents at young ages. ... Obviously that’s unfortunate, but maybe it has helped him a little knowing that it’s not just him, that he’s not alone.”

Connor and Brian have had a strong support system, both said.

Don Dudley and Pam Halcrow – Taunia’s parents – moved from Virginia to Johnstown to be close to their grandson.

Brian is a native of northeast Philadelphia, and says his family has been there for them, too.

“We’re fortunate to be surrounded by great family – Pam and Don, along with my family, although they’re spread over the East Coast,” Brian said. “He’s been around that atmosphere, and he’s also been fortunate to have a lot of great friends in this area.”

“If there’s one thing she ever wanted for me, she wanted me to be happy,” Connor said. “I have a ton of great friends. Our family has a ton of great friends. We have a great family. My dad and I fight sometimes, because that’s just how it works. But at the end of the day we’re there for each other. So I feel she’s made the biggest impact on my life.”

He added: “Obviously, losing someone, to put it bluntly, it sucks, it really does. But if you have the right people around you, you can do anything. I got through my loss of my mom because I had people around me that supported me, cared about me and loved me.”

‘Always there with me’

Brian Oechslin said he wants his son to be fully aware of his wife’s story – but not defined by it.

“I just want him to be comfortable with who he is, despite what happened,” Brian said. “Taunia would have wanted him to be happy.”

Brian added: “He wants to remember her. He knows what happened, and he knows it was a damn shame. And there are a lot stories out there about improving survival rates and people coming through it. But there’s also the other side, people who don’t – especially when it came back with a vengeance and spread throughout her body.”

Connor said some people are awkward when talking with him about Taunia’s life and impact – and her death.

Connor now can talk about Taunia’s impact on the community – the fundraising, the education about breast cancer – at least with close friends.

“It’s gotten mentioned to me about writing a speech and just talking about it at the fundraiser,” he said. “I don’t know if I’m open to that yet. That’s a big step. I’ve talked about my mom before, like one on one or in a group. I don’t know if I could do it in front of that many people. I could try.”

Connor has taken many big steps on area soccer fields.

He plays for a club soccer program in Latrobe, and his Westmont team is among the leaders in the Laurel Highlands Athletic Conference and District 6.

Connor wears a pink headband on the field. He said he feels his mother’s presence often, and he wishes she could see him kick the ball into the goal – just once.

“Other than having my mom back, if there could be one thing I would want for me to have, it would be to have her watch me play soccer for Westmont,” Connor said. “... That’s the one thing I wish she could do – just see me play one game of soccer.

“But I feel like when I play soccer, even though she never has seen me play, she’s always there with me.”

Welcome to The Tribune-Democrat’s annual Pink Edition, with pink background on key pages as part of our month-long effort to help raise awareness of breast cancer and convince our readers to get screened and have routine mammograms. Throughout this edition, you will see ads from the many sponsors who made this Pink Edition possible.