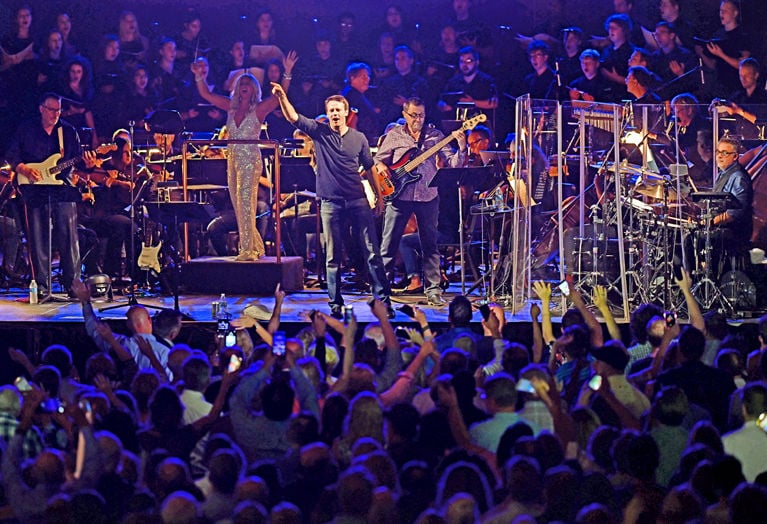 Maestro James Blachly (center), Johnstown Symphony Orchestra music director, joins the audience in singing “We Are the Champions” during their performance of “The Music of Queen” at JWF Industries on Saturday, Sept. 28, 2019. 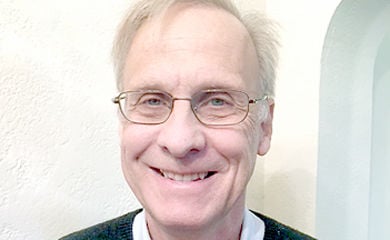 Maestro James Blachly (center), Johnstown Symphony Orchestra music director, joins the audience in singing “We Are the Champions” during their performance of “The Music of Queen” at JWF Industries on Saturday, Sept. 28, 2019.

The jean-clad Johnstown Symphony Orchestra, guest artists Jeans N’ Classics and a 33-voice strong select chorus performed “The Music of Queen” before a sold-out crowd of 1,400 at JWF on Saturday night.

JWF President and CEO Bill Polacek generously agreed to host the third JSO concert in an industrial space. The factory floor was cleared out specifically for the show. There was a striking contrast between the “bare ruined choirs” of the Cambria Iron Works (now an active marijuana concern with Hanging Gardens LLC) and the up-to-date décor at JWF.

The select chorus was drawn from Conemaugh Township Area, Richland and Bishop McCort Catholic high schools, as well as the University of Pittsburgh at Johnstown and the JSO.

People started arriving at 6 p.m., 90 minutes before curtain – many ferried by the shuttle bus and others on foot, coming across the pedestrian bridge on a balmy Indian summer evening. The mood was more restrained than a rock concert, yet more rowdy than a symphony performance, with a general happy feel of a class reunion or block party.

Two large television screens projected images of the stage, allowing the audience to see the 36-player orchestra seated behind the band. Later in the performance, the select chorus was seated behind the orchestra. This led to predictable difficulties in hitting the sweet spot in balance between the three forces. This equilibrium was definitely better after the intermission.

The lead singer, the indefatigable Michael Shotton, worked hard to energize the audience, and succeeded in bringing people to their feet, clapping and dancing. He also provided background to the songs, such as Freddie’s writing “Crazy Little Thing Called Love” in the bathtub, and the video for the song “I Want to Break Free” as inspired by the long-running UK TV serial “Coronation Street.”

Anyone looking for a tribute band approach to Queen was sorely disappointed. The appearance of the lead singer was more reminiscent of a buff Bruce Springsteen than a wiry Farrokh Bulsara (better known as Freddie Mercury). The backup vocalists were rocking, but not choreographed. The songs were interpreted, not merely reproduced. This was very refreshing, consistent with Queen’s creative genius.

They could hardly have chosen a more apt rock group than Queen, noted for their omnivorous appetite for diverse musical forms, spanning hard rock, progressive rock, arena rock, funk, folk and – famously – opera. It is tempting to consider “Bohemian Rhapsody” from the 1975 album “A Night at the Opera” as sui generis, until one recalls that The Who had produced the rock opera “Tommy” in 1967.

The work is more startling for its duration of 6 minutes, a far cry from the standard 3 minutes of rock ‘n’ roll radio. Moreover, Freddie was a lifelong opera aficionado. During is solo career in 1987, he recorded the album “Barcelona” with Spanish opera soprano Monserrat Caballe; the single later featured in the 1992 Olympic summer games.

The highly successful rock biopic “Bohemian Rhapsody” has definitely revived awareness of Queen and their music. A quick show of hands at the concert revealed that virtually everyone present had seen the film.

The first part of the evening got the crowd clapping to “Radio Ga Ga,” an early MTV hit, and the inspiration to Stefani Joanne Angelina Germanotta to become Lady Gaga.

The unforgettable bass line of “Another One Bites The Dust” set hearts thumping, as did the surprisingly prominent bass in “I Want to Break Free.”

“Under Pressure” seemed too relaxed, particularly when one remembers the Bowie-Mercury version, which crackled with tense energy.

The real fun started after intermission. Stacey Polacek, bearer of the golden baton, took the stage in a sparkling silver pants suit, and led the crowd in enthusiastic renditions of the rock anthems “We Will Rock You” and “We Are The Champions” – (with powerful audience sing-along and lit iPhones waving). Undeniable rock star quality.

“Flash” (from the movie “Flash Gordon”) featured the chorus and orchestra. The JSO had a virtual solo turn in “Who Wants to Live Forever,” composed by Brian May in a taxi after seeing “Highlander.”

Jeff Webb, director of the JSO chorus, sang the first notes of “Somebody To Love.” He sang with such beauty and feeling, it was almost a crime to stop him. The celebrated “Bohemian Rhapsody” gave all parties a chance to shine, and shine they did, handling the intricate rhythmic changes and demanding vocal range with mastery.

The band generously played two encores, finishing with a rollicking “Fat Bottomed Girls” – which literally had them dancing in the aisles on their way home.

The JSO returns to Pasquerilla Performing Arts Center on Oct. 19 with a Slavic season opener with Dvorak and the Tamburitzans, the first concert in a series exploring the music of Johnstown’s diverse ethnic communities. Enjoy mightily.

With the start of its season, the Johnstown Symphony Orchestra is planning to bring the symphony to the city while welcoming the city to the symphony.