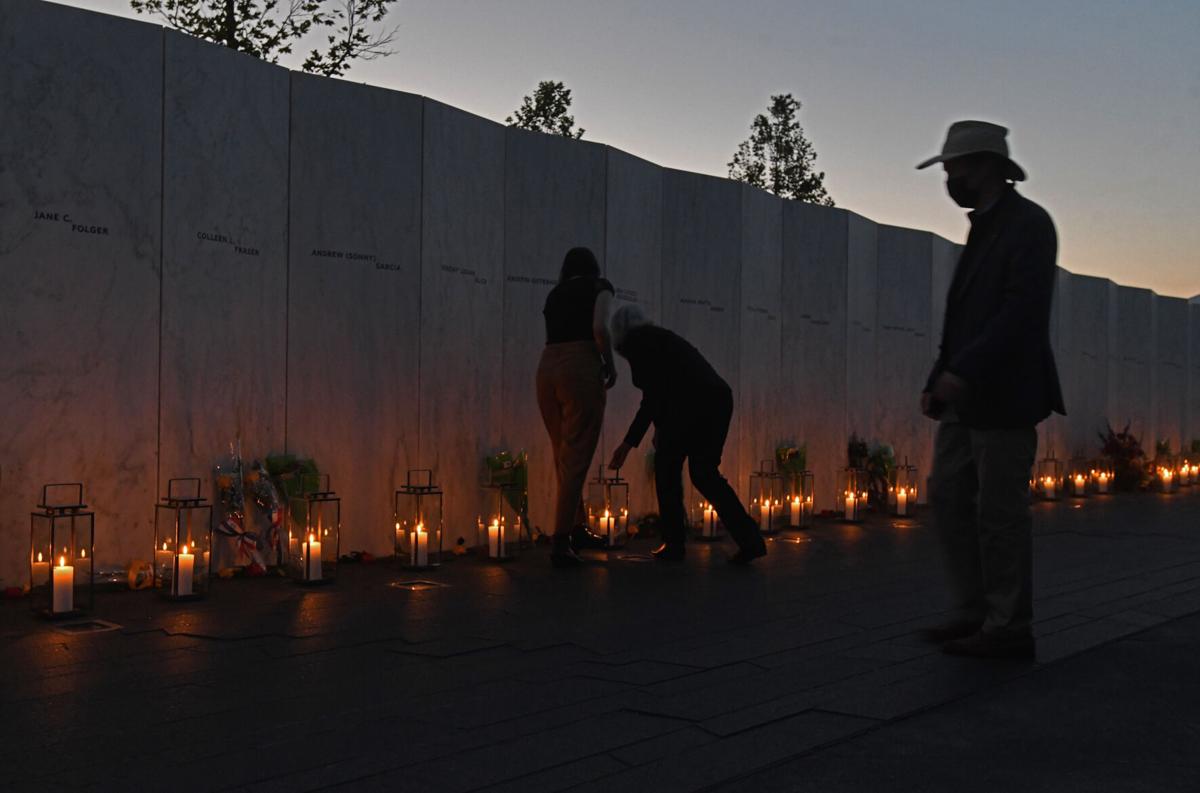 Gordon Felt, president of Families of Flight 93, right, is shown during a luminary ceremony at the Wall of Names at the Flight 93 National Memorial near Shanksville, PA., Friday, Sept.10, 2021. 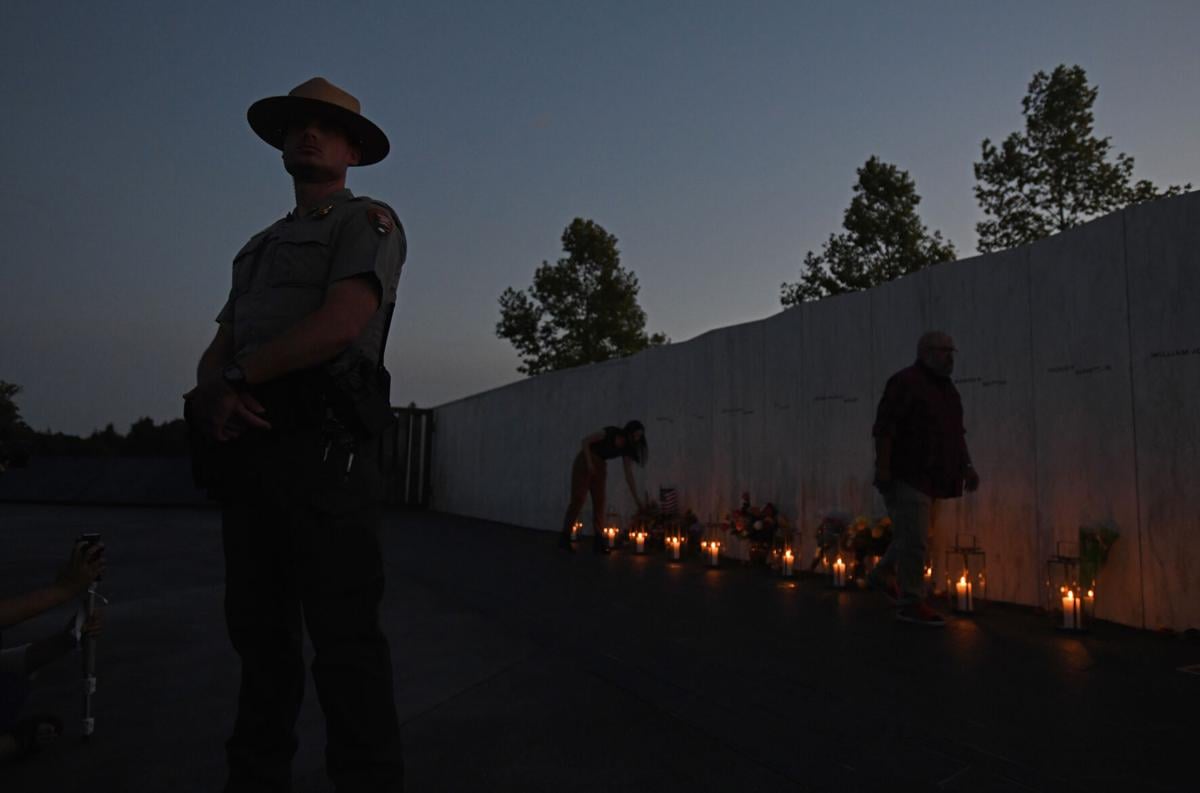 Family and friends of the passengers and crew of Flight 93 place luminaries along the Wall of Names during a remembrance ceremony at the Flight 93 National Memorial near Shanksville, PA., Friday, Sept.10, 2021. 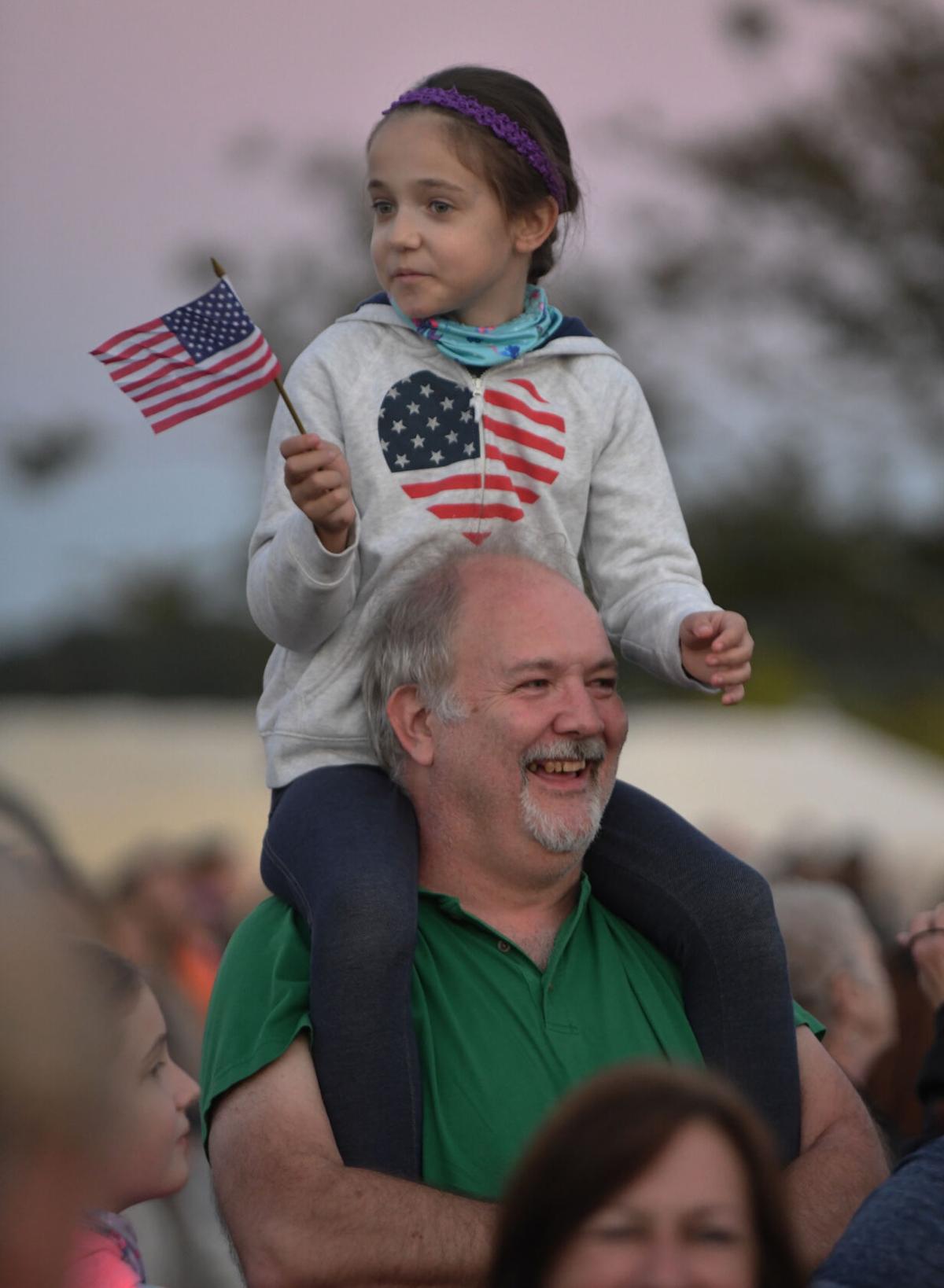 Emilia Miller,9, of York, PA., waves a flag while perched upon her father Allen’s shoulders prior to a luminary ceremony at the Wall of Names at the Flight 93 National Memorial near Shanksville, PA., Friday, Sept.10, 2021.

Gordon Felt, president of Families of Flight 93, right, is shown during a luminary ceremony at the Wall of Names at the Flight 93 National Memorial near Shanksville, PA., Friday, Sept.10, 2021.

Family and friends of the passengers and crew of Flight 93 place luminaries along the Wall of Names during a remembrance ceremony at the Flight 93 National Memorial near Shanksville, PA., Friday, Sept.10, 2021.

Emilia Miller,9, of York, PA., waves a flag while perched upon her father Allen’s shoulders prior to a luminary ceremony at the Wall of Names at the Flight 93 National Memorial near Shanksville, PA., Friday, Sept.10, 2021.

SHANKSVILLE, Pa. – As the sound of strings gently broke through the silence of a crowded plaza Friday at the Flight 93 National Memorial, Hayden Johnson joined a parade of volunteers carrying lanterns to the Wall of Names to honor the 40 passengers and crew who died fighting back against terrorists 20 years ago Saturday.

The 11-year-old from Detroit knows about saluting heroes.

Earlier Friday, her father, Sivad Johnson, was named the first recipient of the Flight 93 Heroes Award, presented by the Friends of Flight 93 group to an individual who, members say, embodies "the spirit and resilient courage of the 40 passengers and crew members of Flight 93."

Sivad Johnson, a sergeant and 26-year veteran of the Detroit Fire Department, perished on Aug. 21, 2020, while attempting to rescue three girls in the Detroit River.

"They heard three girls screaming for help in the water," Sivad Johnson's sister, Eboni Thomas, said. "He went in to help them but did not make it out."

Thomas said her brother would have fit well with the passengers and crew of United 93, whose actions 20 years ago helped bring down a hijacked plane in a former strip mine – just yards away from where Friday night's Luminaria Ceremony was held.

"If he were in that situation," Thomas said, "we have no doubt that he would do the same thing."

Hayden Johnson joined Flight 93 family members, National Park Service representatives and distinguished guests in the dramatic lighting of the Wall of Names, which bear the names of the 40 passengers and crew members.

The Memorial Plaza was packed with family members and other visitors, as 40 lanterns were carried to the wall, one for each of the marble tributes, as the Johnstown Symphony Orchestra's strings performed.

"Once the music started, the emotions kicked in," Hayden Johnson said. "It started to get closer to your heart."

Symphony Executive Director Jessica Satava said the musicians were there to provide a "sense of reverence" for the Luminaria Ceremony. The symphony will return for Saturday's anniversary gathering, which begins at 9:45 a.m.

"Music speaks to us in a deeper way, and in a way that is different than words," Satava said before the procession. "That's why this gift is something we're so honored to share."

Dave Kurtz, captain of the USS Somerset, also placed a lantern Friday, and said he experienced "an emotional setting" on his first visit to the Shanksville site.

"To be able to participate in this memorial is an incredible honor," the 47-year-old from Coatesville, Pa., said.

Sailors from the ship named in honor of the region's connection to 9/11 lined the plaza as the lanterns were carried to the wall.

Cortney Pitts, from Memphis, Tennessee, said he and others who serve on the USS Somerset learn the facts associated with the events of Sept. 11, 2001. The ship – which traveled from its base in San Diego around the globe in the past year – includes a memorial featuring the names of the Flight 93 heroes, along with a 9/11 museum, and walkways named after streets in Somerset.

Steel from the drag line that once sat in the field where the plane crashed was melted down and built into the ship's keel.

"Somerset County is in the backbone of our existence," Pitts said.

He said meeting family members of those who perished when Flight 93 crashed was a powerful reminder of his own military service – providing an emotional connection to go with the intellectual ties he developed serving on the USS Somerset.

"We met the wife who was left behind, the kids who grew up without a parent," Pitts said. "When we leave our own families, we know there is an inherent danger in what we do. We talk about that anytime I leave for deployment. But the people on Flight 93 that day were just on their way to do basic life things. ...

'Privilege of a lifetime'

Steve Aaron stood by the Wall of Names and reflected on his experiences as deputy press secretary for Gov. Tom Ridge in 2001.

He recalled that many of the governor's staff were at a golf outing when word began to reach them of planes being flown into buildings in New York.

Soon, Aaron was serving as the governor's liaison with Pennsylvania Emergency Management Agency, even as a police helicopter was dispatched to Erie to bring the governor back to Harrisburg from a family visit.

Aaron was with Ridge in a Chinook helicopter as it circled a smoking crater near Shanksville where Flight 93 had gone down, before Ridge met with media near the crash site.

"One of my lasting memories is just how loud that helicopter was – with the twin rotors and the cargo door open," said Aaron, who still works with Ridge as president of SRA Communications.

Another memory, Aaron said, was encountering "a charred piece of earth," and then standing before 88 television cameras with the governor as Ridge attempted to put the events of the day into perspective.

"He was amazing that day," Aaron said. "I don't know how he marshaled the words to comfort Pennsylvanians who were in shock. We were all distressed.

"Little did we know, but a few days later, he would be gone. He got the call from the president."

Aaron said Ridge is making steady recovery from a stroke suffered in June, but wasn't healthy enough to make his traditional stop at the Flight 93 National Memorial.

"It was the professional privilege of a lifetime to be able to assist him that day," Aaron said.

'We don't want them to forget': Next generation of Flight 93 families honors relatives' sacrifices