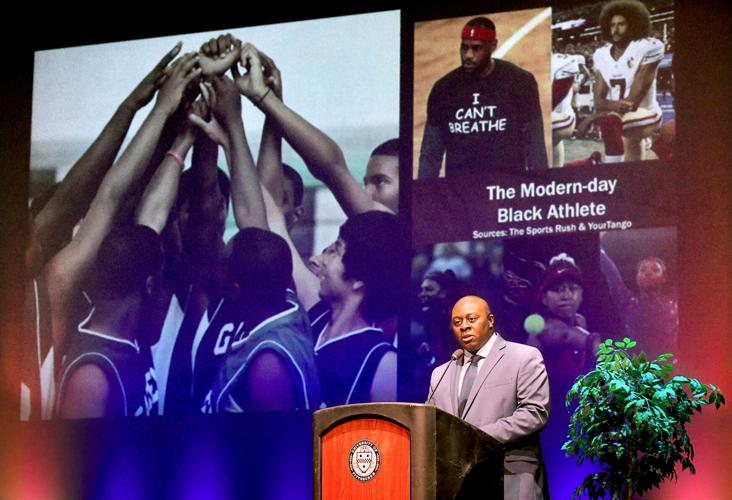 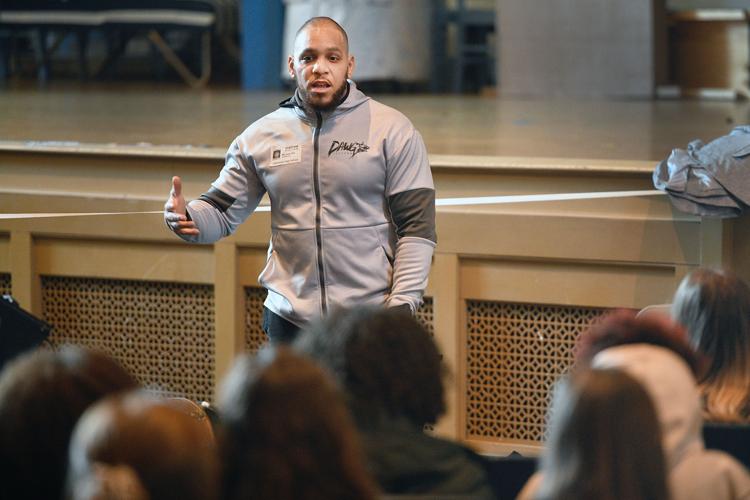 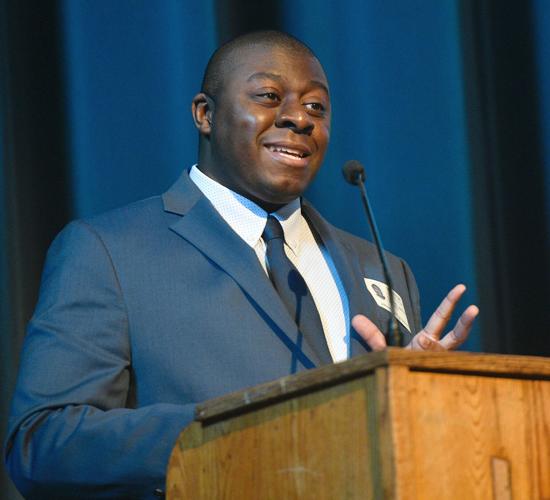 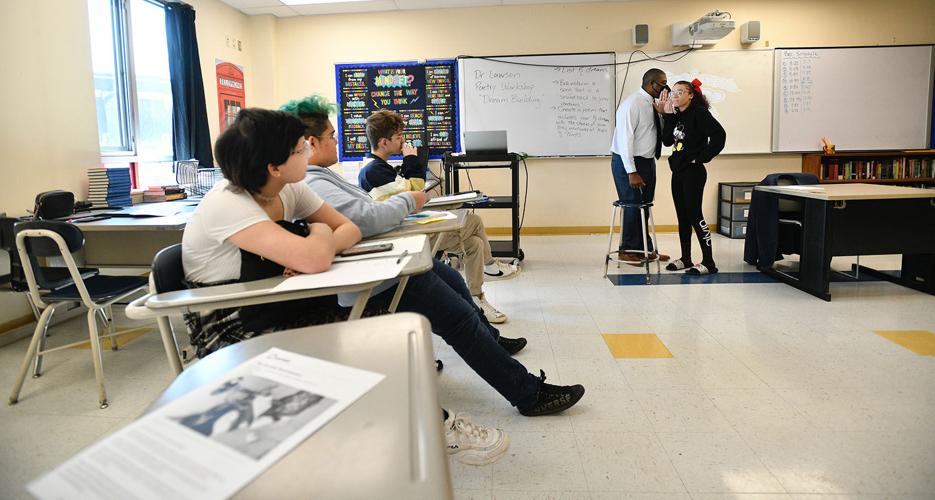 JOHNSTOWN, Pa. – Mike Hill and Len Lawson shared messages on diversity, dreams and passion on Wednesday from stages at the campuses of Greater Johnstown High School and the University of Pittsburgh at Johnstown, while also sharing their personal journeys regarding those subjects.

“It’s a new dream come true,” Hill said of the opportunity to speak. “Just being invited out was a blessing.”

Hill’s presentation focused on his diagnosis of Hodgkin’s lymphoma and his fight to survive, as well as the cultivation of what he calls his “Dawg” mentality – a belief that no matter what’s in front of a person, he or she must persevere to achieve their dreams.

He fought his way back from the brink of death after being diagnosed with cancer in 2011 and receiving several treatments that weren’t as successful as his doctors hoped. That came after working hard to be a better football player, with the goal of making it to the NFL so he could support his mother.

Relying on faith, determination and his “Dawg” mentality, he recalled, he continued to fight until an aggressive chemotherapy and stem cell treatment was offered through the National Institute of Health.

“Life’s not fair,” the Maryland entrepreneur said. “You either let it kill you or use it to make yourself better.”

He now collaborates with NFL teams, such as the Philadelphia Eagles and Indianapolis Colts, for his Dawg Culture brand.

The day-long forum started at the high school with an address to the students there. It was presented by the Ron Fisher African American History Educational Fund and the University of Pittsburgh at Johnstown SPARKS seed grant project, which promotes diversity, inclusion and equity.

Ron Fisher was a reporter for The Tribune-Democrat who died in late 2019. The fund was established in his name at the Community Foundation for the Alleghenies, which also sponsored the forum, along with Greater Johnstown School District and The Tribune-Democrat.

‘The passion of my purpose’

Lawson, an English professor at Newberry College in South Carolina, discussed his path through an unfulfilling business degree to becoming an educator and published poet with a focus on Black culture.

During his daytime talk at Greater Johnstown High School, he told students that dreams such as his have to be fiercely pursued.

“Every day, I learned to let the passion of my purpose lead me to my dreams,” Lawson said.

In the evening at Pitt-Johnstown’s Pasquerilla Performing Arts Center, Lawson shifted gears to a discussion of the intersection of sports, race and poetry.

Throughout both presentations, he blended his art form into his speech. In the later presentation, he referenced athletes Muhammad Ali, Serena Williams and Colin Kaepernick, often showing videos, such as a clip of Ali reciting his poetry, to reinforce his points.

Lawson discussed Black athletes and their causes, from political endeavors to mental health battles, and how they have been persecuted by society for doing so.

“Only when those of us courageous enough to step off the field and the stage to share our hearts, as well as the swiftness of our bodies and tongues, will the next Ali, Serena and Kaepernick emerge in the right place for their right time,” he said.

Both speakers were graciously welcomed by the students they spoke to at both locations.

“It made me feel like your dreams can come true if you work hard enough,” Greater Johnstown sophomore Kaitlyn Kuruzovich said. She was one of the learners invited to break-out groups to work with Hill and Lawson after their initial presentations.

Kuruzovich said Hill’s message resonated with her, especially his battle with cancer, because her mother had a similar experience.

“Talking to Mike, I feel really inspired,” she said.

“It means a lot that they try to introduce us to different people,” he said of the event.

During Hill’s break-out meetings, he continued talking to the students about his journey and participated in a question-and-answer session. Lawson’s cohort brainstormed ideas about dream careers and wrote poems related to those concepts. They also played a word association game and talked about writing.

“I think I’m definitely way more motivated,” student Evan Gates said. Hearing from the speakers made her realize that change can come and she can be part of that.

Aniyah Britt said she learned to follow her passion in life by listening to the speakers’ messages. She was also inspired by Lawson’s quote, “A dream without purpose is just a wish.”

Cheryl Fisher, Ron Fisher’s mother, told the group to “take the positive things said this morning and use those things.” She and her daughter, Alexis Fisher, spoke prior to Lawson and Hill at Greater Johnstown. Both were thrilled that months of planning for the forum had paid off in such a big way.

Christian Wrabley and Eric Wentz, teachers at the high school, had suggested the speakers for the event because they were familiar with their stories. Hill and Wrabley played college football together, and Wentz befriended Lawson through their doctoral studies.

“To bring in two totally different, dynamic speakers with great messages – I just knew their words would connect,” Wrabley said.

Wentz agreed, stating that being able to provide other perspectives to the students was one of the great things he can do in his job.

Tuangtip Klinbubpa-Neff (Noon), SPARKS principal investigator and Pitt-Johnstown assistant professor of English literature, was impressed by the presentations as well.

“Their messages are so meaningful,” she said.

Pitt-Johnstown student Eric Gamble also enjoyed the messages. He considered the event a “needed” discussion on the campus, appreciated the focus on diversity in both speakers’ talks and said he wants to see that expressed elsewhere at the school.

“A lot of these things you won’t hear outside of here,” Gamble said.

Jem Spectar, UPJ president, compared the discussions to the African concept of “ubuntu” – a concept of interconnectedness – during his introductory speech.

“That interdependence is not just something we can find in the laws,” he said. “It should grow in our hearts. It’s part of our DNA.”

Spectar added that the ethos of humanity is that “we all are one” and said Pitt-Johnstown was happy to host Hill and Lawson because doing so amplified the mission of the university.

In addition to the speakers, posters displaying the accomplishments of SPARKS throughout the past two years and those from a class project Klinbubpa-Neff taught regarding international diversity in sports were also on display at the performing arts center.

Alana Donald wore an African dress and Clyde Williams dressed in overalls and a flannel shirt to portray garments worn by slaves who worked the cotton fields in the South during a remembrance of Black culture on Sunday at St. James Missionary Baptist Church in Johnstown’s Hornerstown section.