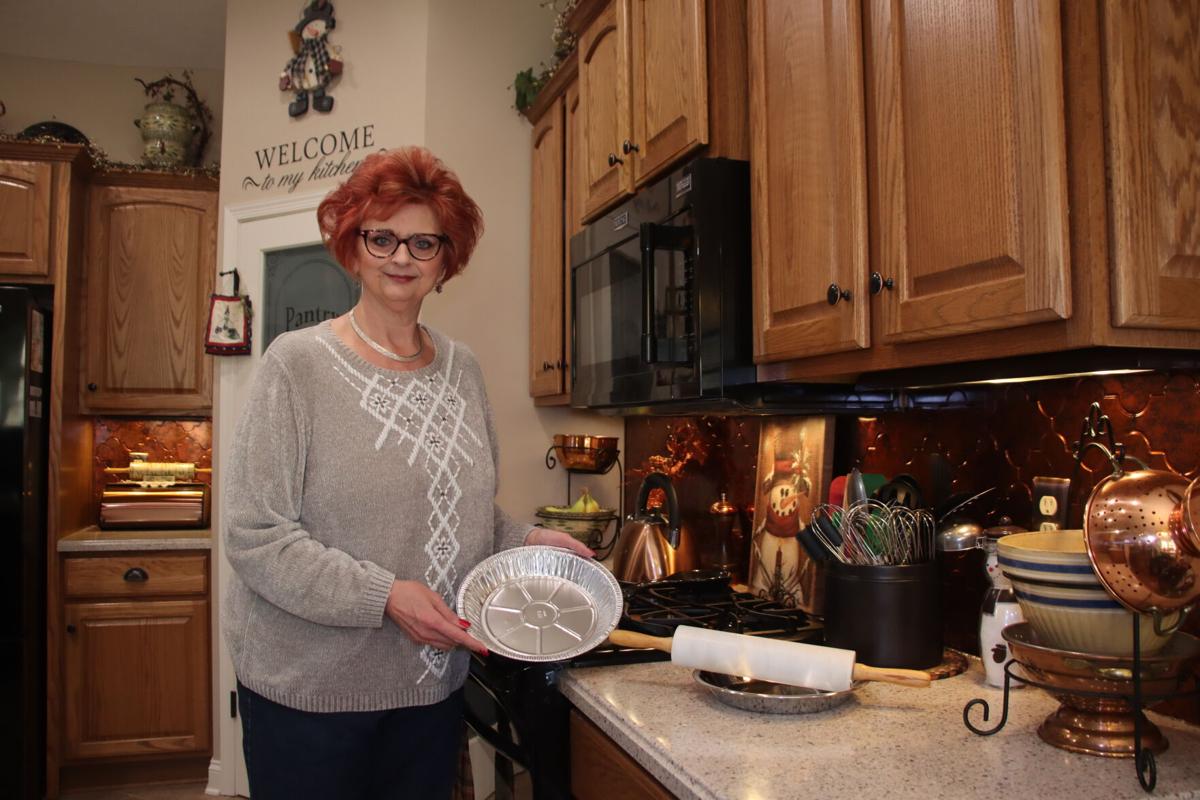 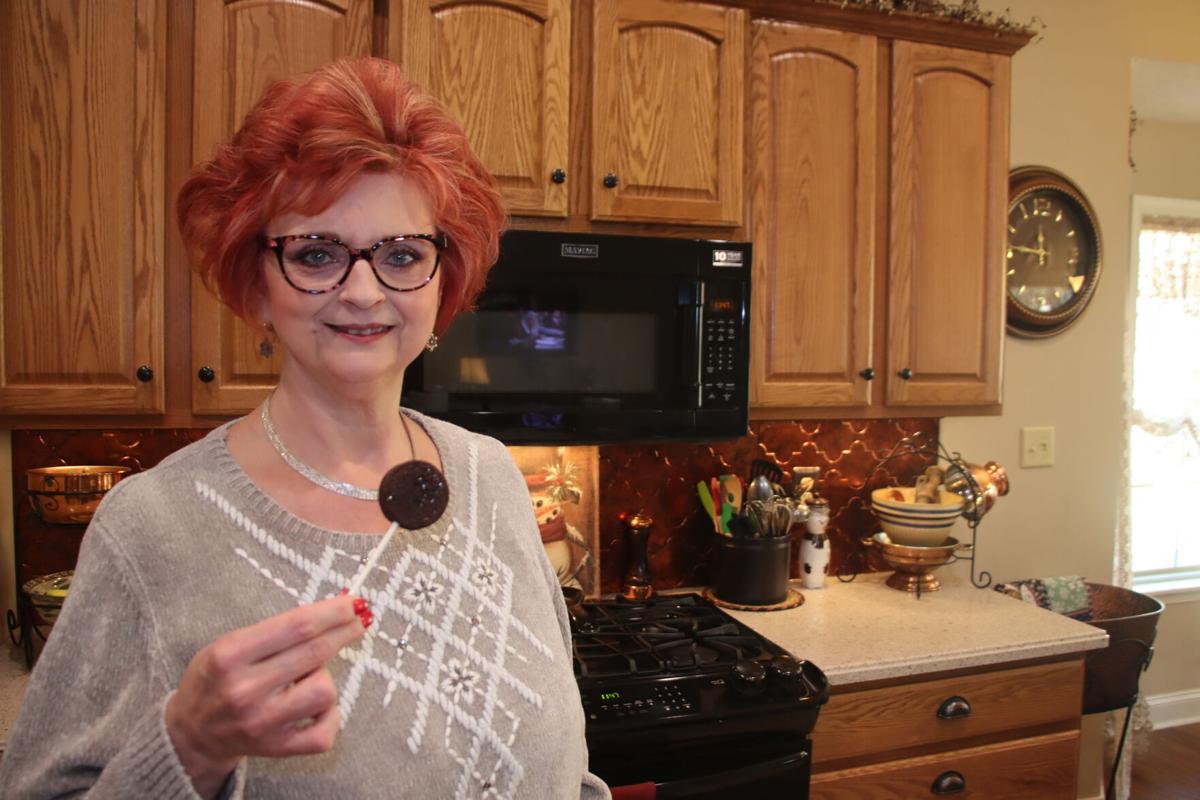 Sharon Karlheim shows off one of the decorations used in the chocolate cake she entered into the state Farm Show competition. It is decorated with edible glitter. 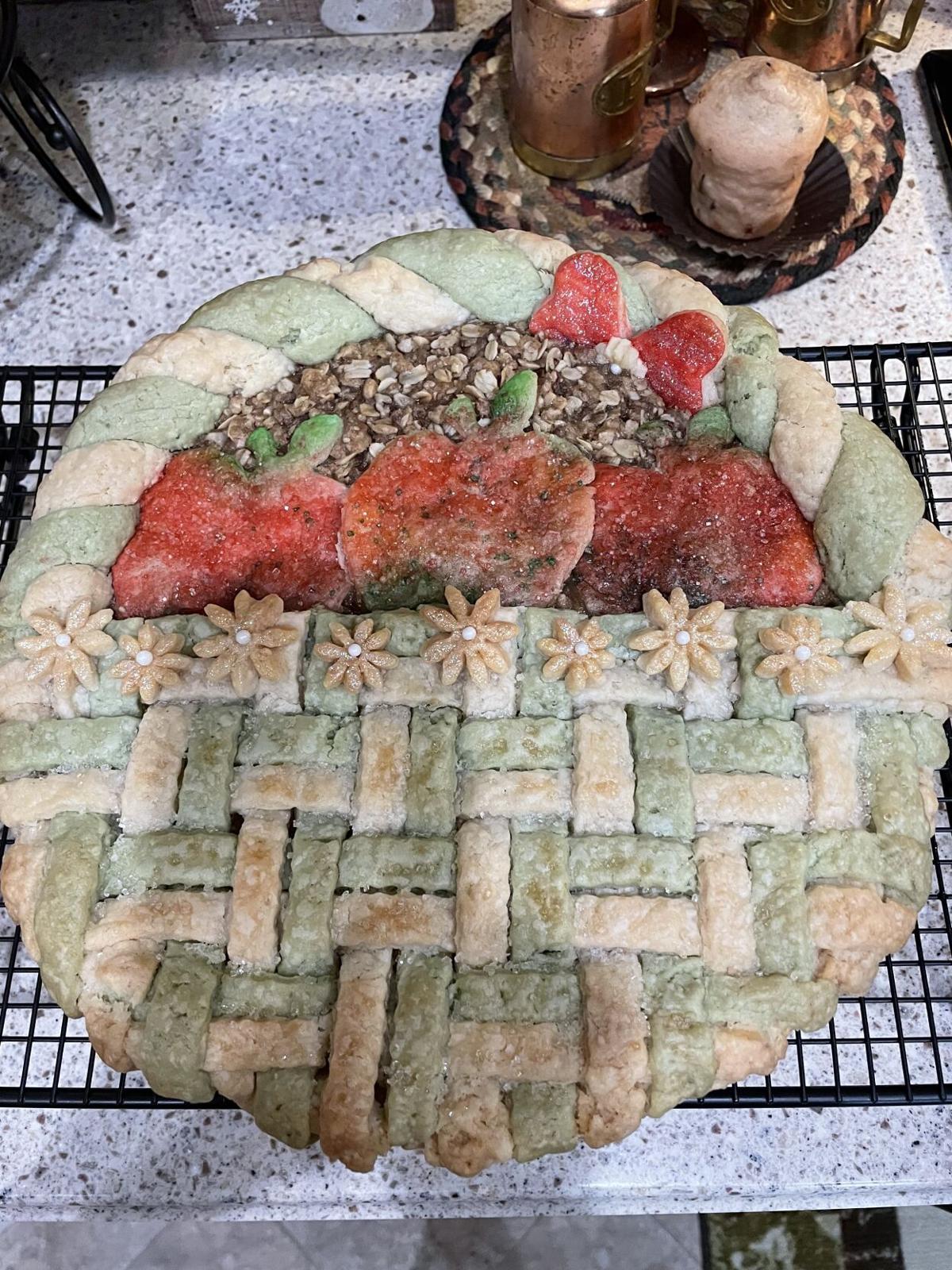 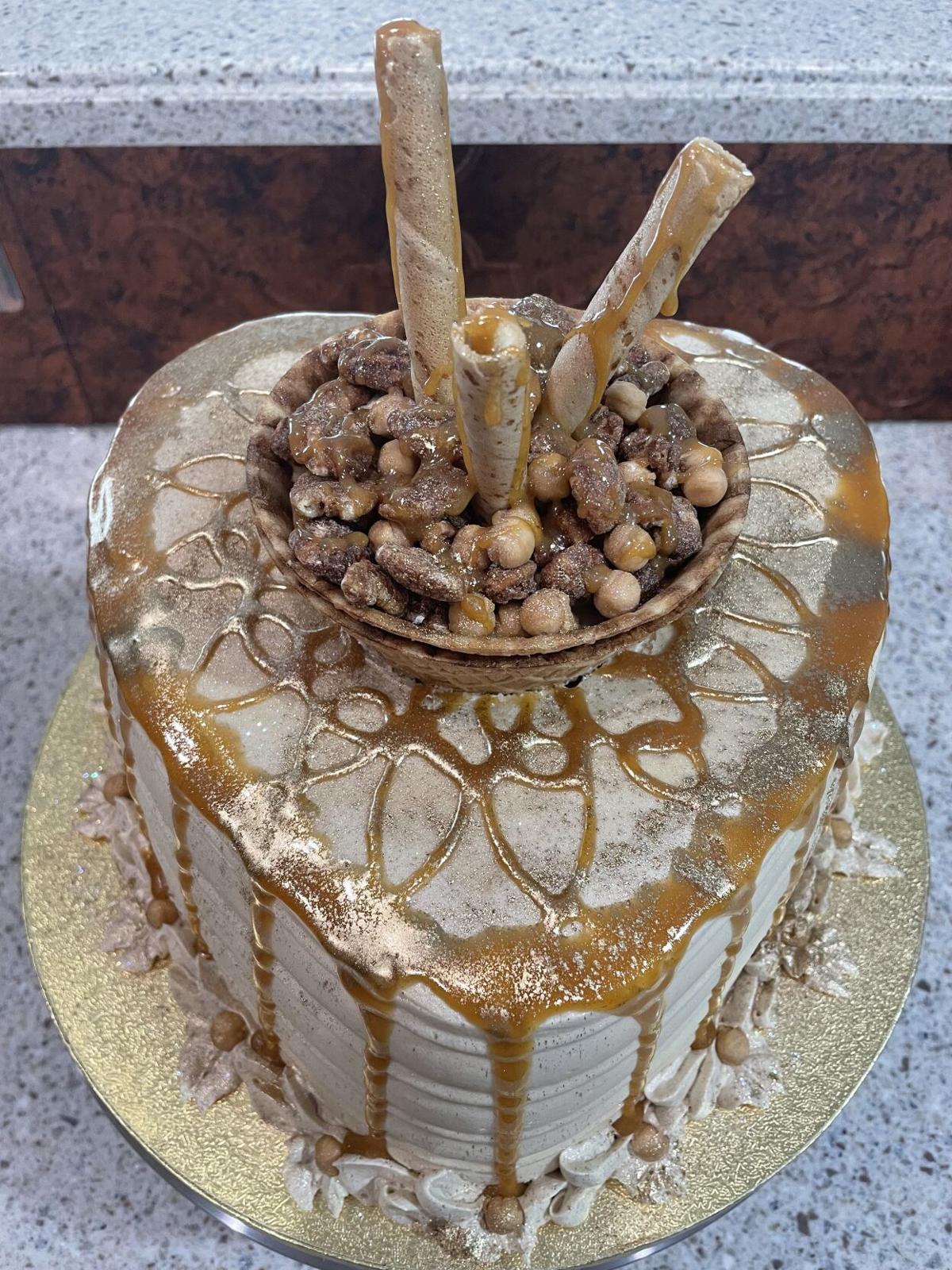 This angel food cake won a ribbon for Sharon Karlheim at the state farm show. 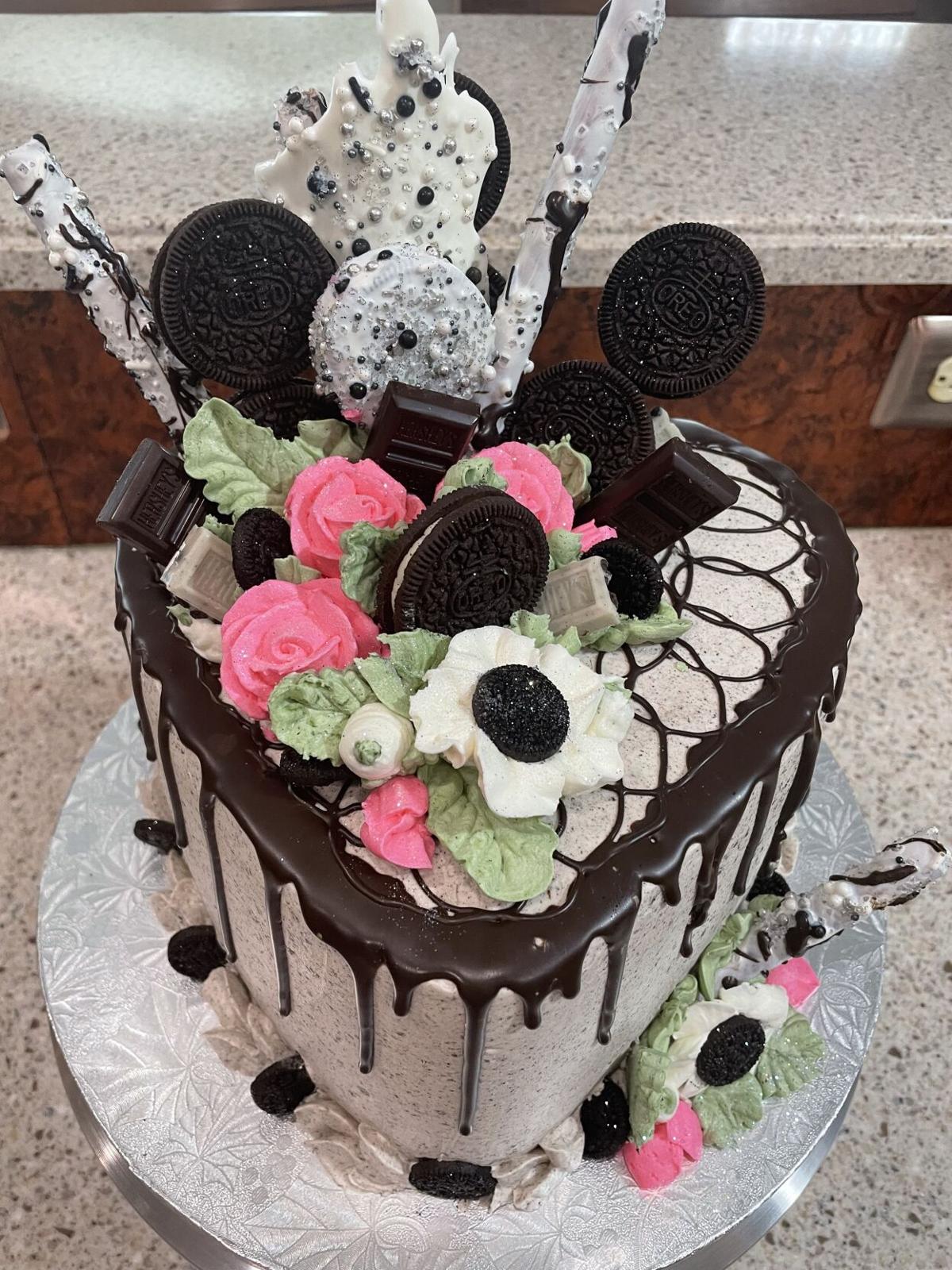 Sharon Karlheim shows off one of the decorations used in the chocolate cake she entered into the state Farm Show competition. It is decorated with edible glitter.

This angel food cake won a ribbon for Sharon Karlheim at the state farm show.

PATTON, Pa. – It began more than a decade ago when Sharon Karlheim entered her baked goods in the Harmony Grange Fair competition near Westover, Clearfield County.

“I’ve always been a decent baker,” Karlheim said in her Patton home. “I decided one time: Why not? Why not try it?”

She didn’t win a ribbon, but she kept trying, building her skills, expanding her repertoire and setting new goals.

Last weekend, she reached two of her latest goals, bringing home a blue ribbon for best apple pie and a white, third-place ribbon in the Incredible Angel Food Cake competition at the statewide Pennsylvania Farm Show in Harrisburg.

With her latest wins, Karlheim has now received a ribbon in all three of the farm show’s featured baked goods contests. She had previously taken second place for her chocolate cake.

It’s been a long road.

A graduate of Harmony High School, Karlheim was familiar with the Harmony Grange Fair. The fairgrounds are adjacent to the school complex.

When her first attempt at the baking competition did not produce a ribbon, she returned the next year and the next. The ribbons started coming, and soon Karlheim received her first blue ribbon for a chocolate cake.

Competing with first-place winners from fairs across the state was overwhelming, at first, but Karlheim pressed forward, branching out to enter the American Legion Cambria County Fair competition.

In order to qualify for the Pennsylvania Farm Show competition for the best apple pie, chocolate cake and angel food cake, bakers must win a blue ribbon at one of the recognized local or county agricultural fairs.

One year, she swept Cambria County Fair competition, taking the blue ribbon in all three categories.

“When I got a first-place win in all three of those categories, I was ecstatic, to say the least,” Karlheim said.

Every first-place win brought another trip to the farm show.

Karlheim has qualified for the state competition in all three categories since 2012. If the blue ribbons don’t all come at the Cambria County Fair, she bakes up a new batch for the annual Cookport Fair near Commodore, Indiana County.

If necessary, she enters again at the Harmony Fair.

“I always enter something at the Harmony Fair,” she said. “That’s my home fair.”

Taking part in the fairs is part of the whole experience. She and her husband, Regis Karlheim, both grew up on farms and enjoy spending time together at the fairs.

Regis Karlheim especially enjoys tractor pulls and truck pulls while cheering for his wife in the baking competition.

“My husband is my biggest supporter,” she said. “I couldn’t do it without him.”

Her perseverance in baking up entries for the local fairs and trips back to the state competition paid off at the 2014 farm show, when she took a red, second-place ribbon in the chocolate cake competition for her six-layer chocolate, peanut butter and marshmallow cake.

“It kind of gets in your blood once you win, and then win again at the level of the farm show,” Karlheim said. “My first goal was to get to the farm show. Then my goal became: Get any color ribbon I could in any of those categories.”

After the 2014 chocolate cake win, her goal advanced to getting ribbons in all three categories, while hoping for a blue ribbon.

It takes more than a great-tasting pie to win the blue. There are points for the crust, moisture and creativity.

Karlheim said she gets a lot of points for creativity. This year’s blue-ribbon prize had a multi-colored crust, intricately woven and assembled to depict a basket of apples.

“It has to be pretty, too,” she said. “If you’re going to compete in the farm show, you really have to doll it up, because you eat with your eyes first.”

But presentation is just the beginning.

“At the end of the day, you really have to have a good pie,” Karlheim said.

Her recipe blended three different apple varieties and a crust that included vodka for improved flakiness. She partially precooks the apples in advance to assure they don’t cook down during baking and leave a gap under the crust.

“They are phenomenal,” Schilling said. “She does extremely well every year. She pays attention to detail. We are very proud to have her represent our fair at the farm show.”

For her part, Karlheim said years of hard work have been worth it.

“This was my year for the blue ribbon: The best pie in Pennsylvania,” she said. “I’m honored. It was hard to get there, but I did it.”

At just 22 years old, Alayna Moore has already earned internships with professional teams across western Pennsylvania through her passion for sports marketing. Now, she’s headed to the West Coast – and football’s biggest game.