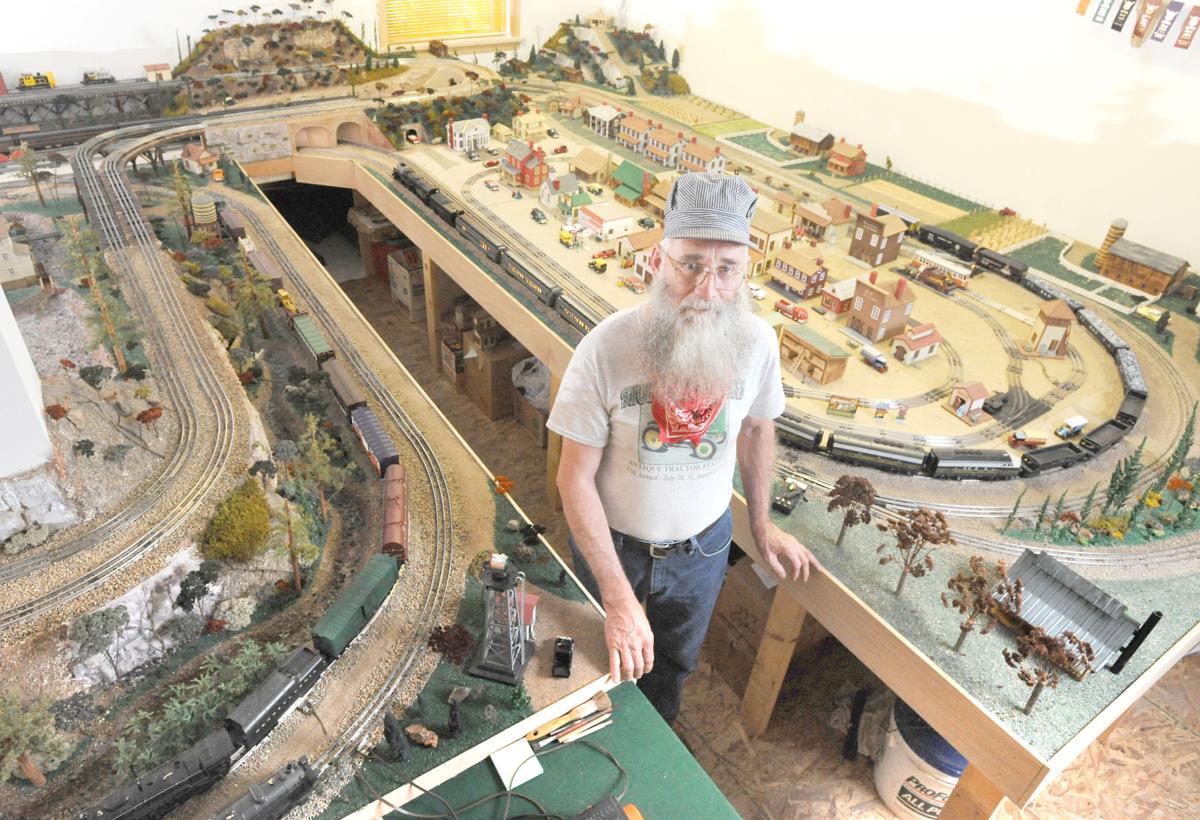 Model railroad enthusiast Charles Sturtz poses with some of the scenes he has created for his Pennsylvania and B&O locomotives and railcars. All of the buildings are replicas he made of structures in Stoystown and surrounding areas from the 1920s and 1930s, and a few from the 1800s. 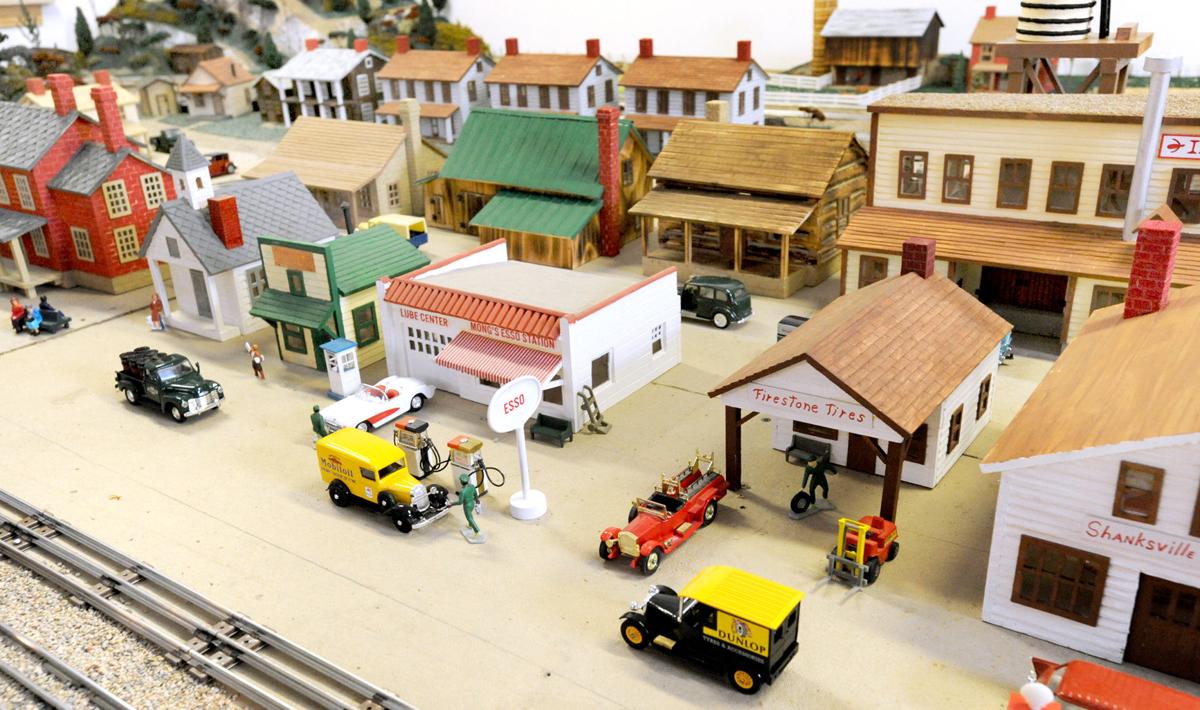 Model railroad enthusiast Charles Sturtz created replicas of structures in Stoystown and surrounding areas from the 1920s and 1930s, and a few from the 1800s. 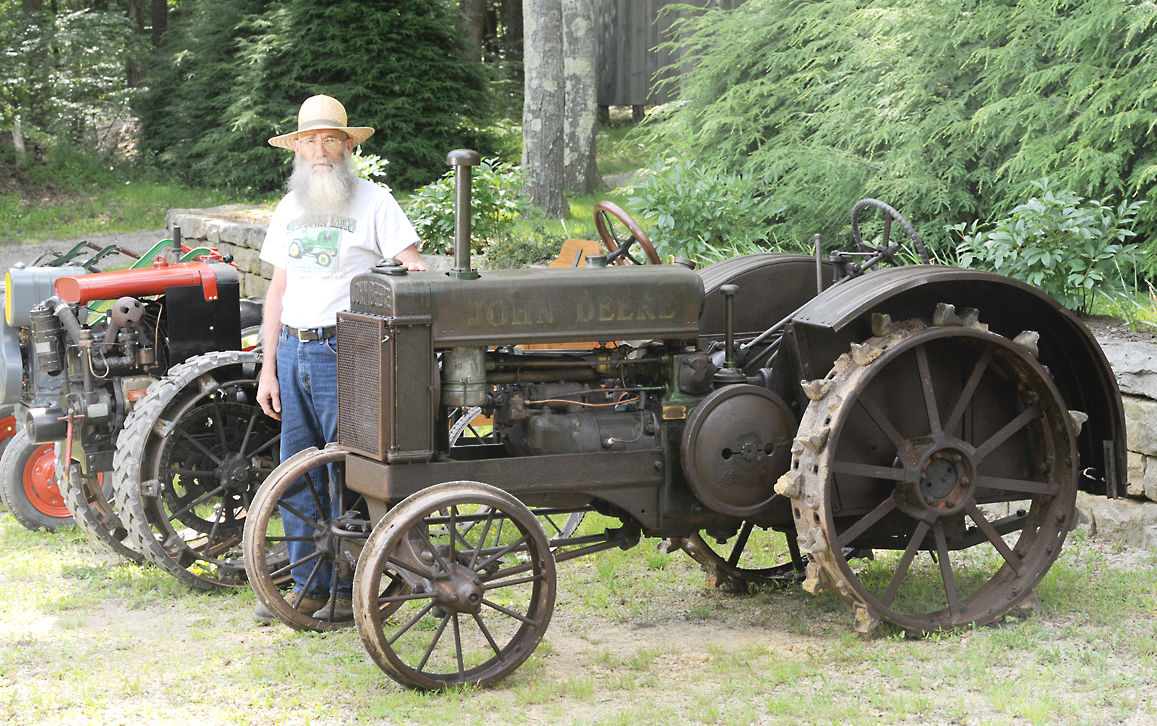 Model railroad enthusiast Charles Sturtz poses with some of his vintage tractors, including the 1936 model in the foreground.

Model railroad enthusiast Charles Sturtz poses with some of the scenes he has created for his Pennsylvania and B&O locomotives and railcars. All of the buildings are replicas he made of structures in Stoystown and surrounding areas from the 1920s and 1930s, and a few from the 1800s.

Model railroad enthusiast Charles Sturtz created replicas of structures in Stoystown and surrounding areas from the 1920s and 1930s, and a few from the 1800s.

Model railroad enthusiast Charles Sturtz poses with some of his vintage tractors, including the 1936 model in the foreground.

Charles Sturtz remembers getting his first train set when he was 7 years old.

Retired after working for many years as a carpenter, the Stoystown resident is again enjoying time spent with train sets.

Only now he’s building them.

“I decided it’s time to put something up for myself,” Sturtz said.

“I jumped in with both feet and I bought all kinds of stuff,” he said. “I have a pile of stuff now.”

Sturtz has been building and creating train sets for about two years, but what he has created in that time is remarkable.

His current layout – his fourth train set design – features Pennsylvania and B&O (Baltimore & Ohio) locomotives and railroad cars surrounded by buildings, trees and turf that Sturtz made from scratch.

All of the buildings on Sturtz’s train set are replicas of buildings in Stoystown and surrounding areas from the 1920s and 1930s.

There are even a few buildings from the 1800s

Sturtz never uses a blueprint or any plans.

He creates the buildings by looking at vintage photos he obtains from old books and magazines. Once he takes a look at the building, it’s only a matter of time before he begins creating.

Sturtz said the only problem he typically runs into is that the photographs show only one side of a building. This is where he gets creative and has to guess what the remaining sides looked like.

Sturtz enjoys working on antique tractors. He has 30 tractors, with one dating back to 1927.

He also spent time as a motorcycle hobbyist. He said at one point he had more than 245 motorcycles.

While he still enjoys riding them, Sturtz said he lost interest in building them.

“I started selling them off and started buying trains and tractors,” he said.

Sturtz, who built his own home with plans he drew up while in high school, said, “I’ll try anything once.”

Donna Nemeth, of Johnstown, met Sturtz a few years ago through mutual friends.

She said she was immediately in awe of his skill.

“He has this unique talent for putting train sets together along with the villages. He does a lot of things from photographs and makes three-dimensional buildings out of it.

“He’s also made my saddle rack out of just a photograph and the measurements of my saddle,” she said. “Not too many people can do that.”

Sturtz said he has plenty of time to invest in his hobbies.

“When you’re retired, it’s all down time,” he said.

Sturtz said he works on his train set every moment that he can. He’s meticulous with his work – even the replica trees in his set are natural shrubs and plants from his yard.

Building the train sets, however, is just part of Sturtz’s hobby. He also finds the time to attend several train shows each year, and he and his wife ride on different trains throughout the country.

Connie Sturtz, Charles’s wife of 42 years, said her own interest in trains stems from her husband’s. Their vacations usually involve a train trip.

Sturtz’s advice to anyone who is looking to start a hobby in train set building is to seek out local train organizations and attend local train shows.

“If you’re interested in something, buy what you like – don’t buy what someone else says you should,” he said.

“My trouble is I liked them all, and I bought a lot of different kinds.”

Sturtz said his current challenge is finding a place big enough for his train set.

Sturtz said he doesn’t know what it is that draws him in, but he enjoys working with the miniature train arrangements.

“He’ll do this for the rest of his life,” Connie Sturtz said.

“I’ve got to keep adding to it,” Charles said. “You never get done with them. You’re always adding stuff and changing stuff.”

In The Spotlight | Globetrotters: Westmont couple have traveled to 93 countries

To say David and Cindie Petersen are well-traveled would be an understatement.

The Westmont couple have traveled to 93 countries, visiting many more than once, on their journey to see all world has to offer.