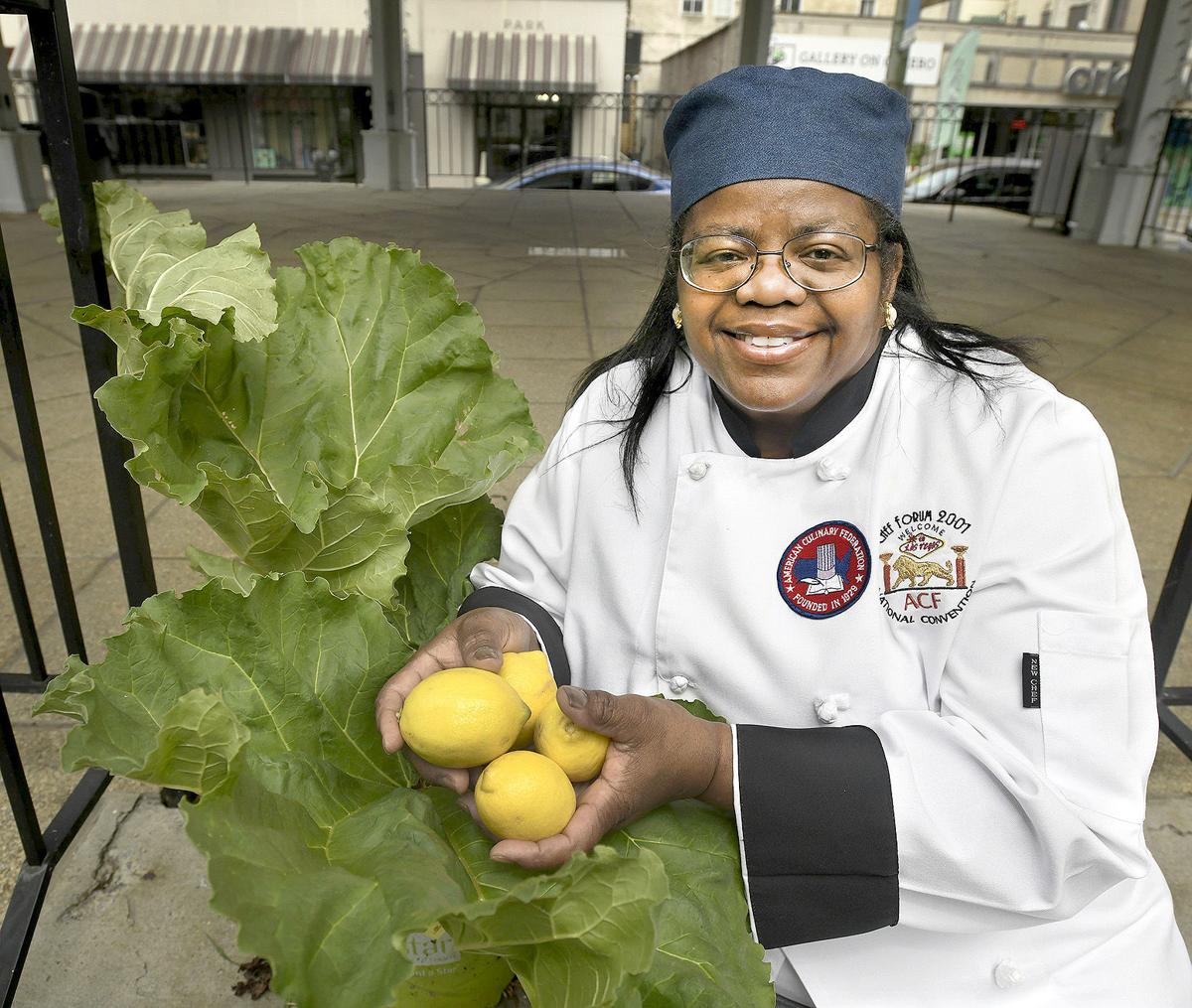 Chef Vinette Showell poses with some rhubarb and lemons to promote her free public sampling of foods on Oct. 18 at Somerset Church of the Brethren, 606 Berlin Plak Road, Somerset. 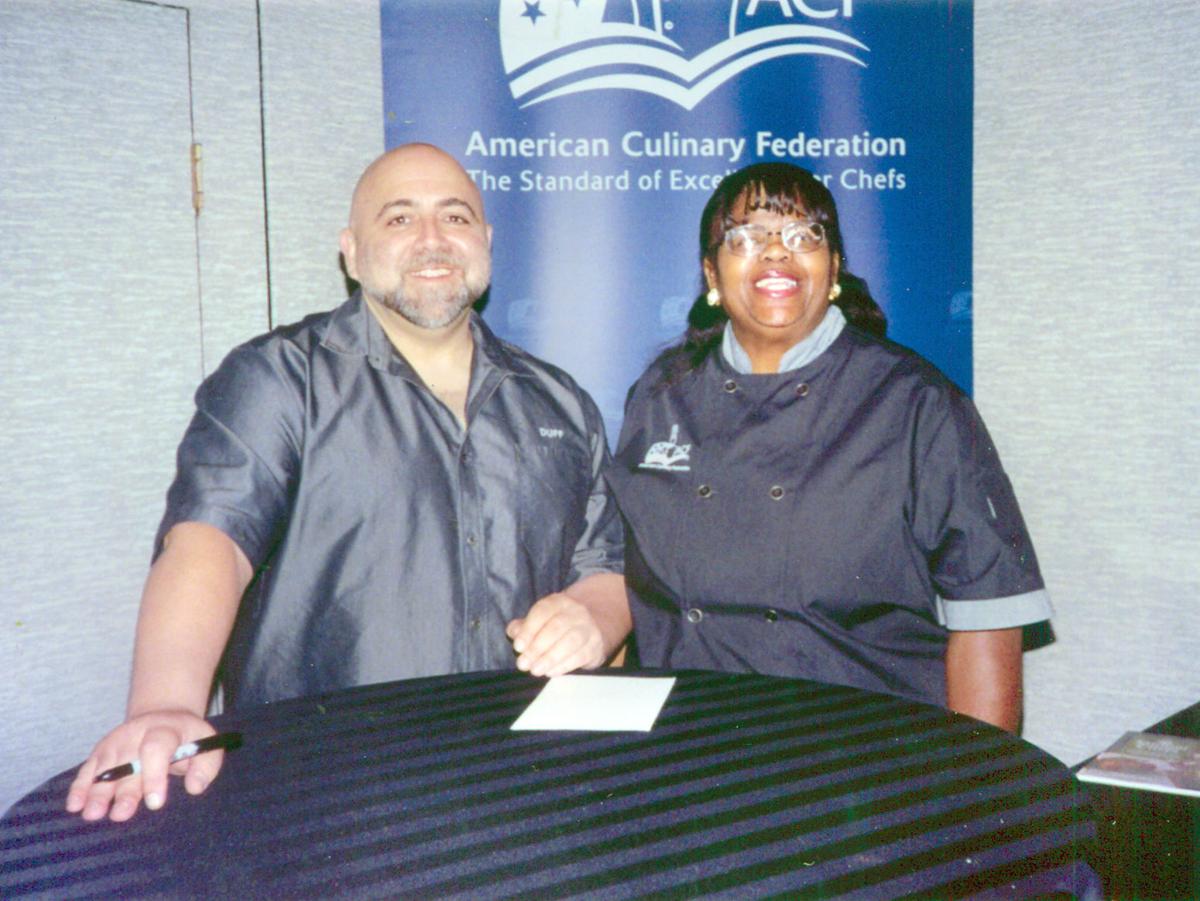 Chef Vinette Showell poses with some rhubarb and lemons to promote her free public sampling of foods on Oct. 18 at Somerset Church of the Brethren, 606 Berlin Plak Road, Somerset.

With a bountiful menu that will include smoked venison salad, duck marsala, rabbit and broccoli quiche, and beer battered salmon, Chef Vinette Showell plans to throw a feast for her family members, friends and foodies interested in providing feedback about her culinary creations as she prepares to finish writing her first cookbook.

The dining experience is scheduled to take place on Friday, Oct. 18, at Somerset Church of the Brethren, 606 Berlin Plank Road, Somerset.

She hopes more than 200 people will attend the free public sampling of foods from “The Caterer’s Table.”

“Come, give me some feedback,” said Showell, a Somerset County resident.

“If they mess it up, then ‘It didn’t taste like that, so I must have done something wrong.’ That’s basically in a nutshell what I’m trying to do.”

Showell plans to take two weeks off from her full-time job to prepare foods for the meal, including prime rib, antipasto, mac and cheese, Brussels sprouts, vegetables, fresh ground Italian ground coffee and what she describes as “dinosaur lamb drumsticks” created to resemble the big-boned meat in “The Flintstones.”

“I’m just doing some neat things,” Showell said. “Stuff like that, I can do it at a family setting, but that will be too much meat. So, if I can get the public in and feed them, it will be worthwhile.”

Much of her style is French with a twist.

“I like the way the French cook, but I like to do things different,” said Showell, who trained at the L’Academie de Cuisine in Maryland. “You have your classic prime rib, your classic hollandaise sauce, poached eggs and asparagus. I just want something new. I’m using the rabbit because a lot of people think they don’t like it, but they can try it. There’s venison, different things like that, duck.”

She has been working on developing the cookbook for years, while, at the same time, caring for her ailing mother.

“I don’t want to sound cruel, but I wasn’t really going to start on this cookbook until Mom passed,” Showell said. “It’s already been long enough waiting for. I’m a born-again Christian and the Lord put it on my heart and he said, ‘Well, what if I let your mom live five to seven years, you still going to want to do that cookbook? Start on that cookbook now.’ And this is the approach I took, especially with the food show. I said I want something different, and that’s what came about.”

Showell has an extensive culinary background, having worked in restaurants and hotels.

Her true passion is butchering, which even led to teaching techniques to Honduran villagers, as part of church mission work.

“I tell everybody, if meat cutting wasn’t a dying trade, that’s where I would be,” she said. “I love cutting meat. I also love cooking. But they coincide. In the culinary arts field, everybody has a strength of what they do. Mine is cutting meat.”

She would like to further expanded her butchering in the future, while assisting senior citizens, who financially struggle to make good food part of their lives, while paying for medicine and other necessities.

“Eventually, Lord willing, I want 200 to 300 acres,” she said. “And I want to raise beef. And I want to help senior citizens out with their food.”

Showell plans to donate any leftovers from the meal to local food pantries.

In The Spotlight | Sharing the bounty: Volunteers hand out hundreds of boxes of food monthly in Nanty Glo

Tucked away on a quiet street in Nanty Glo is a nondescript one-story warehouse full of the food on which hundreds of people in communities such as Belsano, Mundy’s Corner, Nanty Glo, Twin Rocks, Vinco, Blacklick Township, East Taylor Township, Vintondale and Jackson Township depend in part.