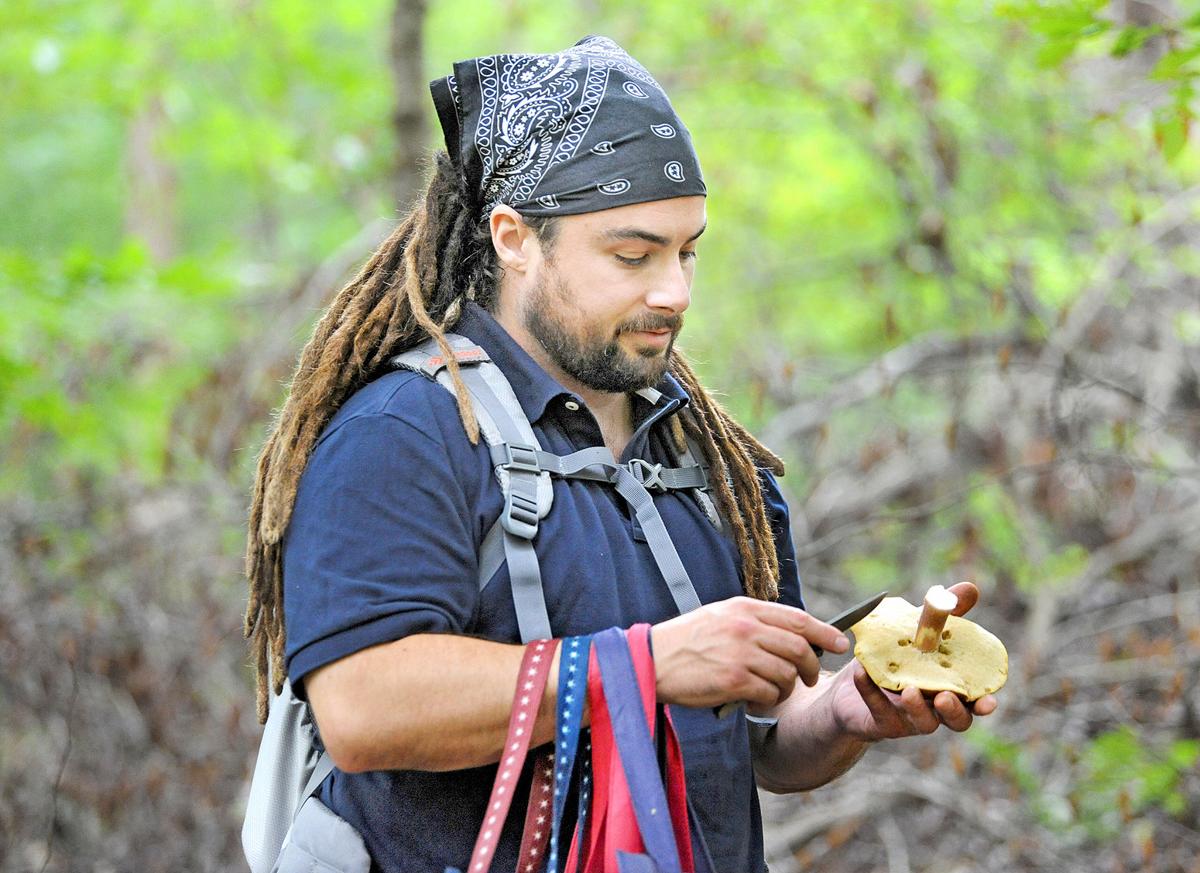 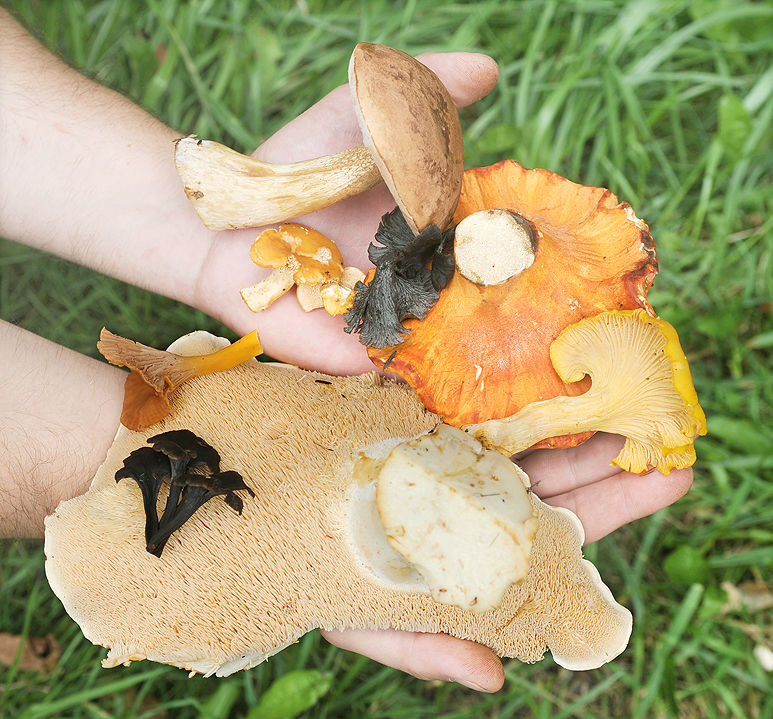 A few days ago, on a slightly muggy, overcast afternoon, Chad Heinlein and John “T.J.” Jackson walked into Stackhouse Park, looking to fill bags and a basket with mushrooms harvested directly from the land.

They soon spotted about a half-dozen different types, most prominently bright orange fragrant chanterelles, popping up among the ferns and dried leafs, and oysters growing on the side of fallen moss-covered trees.

“These are actually a really good mushroom,” said Heinlein as he picked some chanterelles.

“I’ve taken these before and just chopped them up real finely, and mixed them and made them like the meat in a taco. It turned out delicious.”

Heinlein has found other creative uses for chanterelles, too.

“I’ll dehydrate them, grind them up and make a powder, and they’re delicious to add a spice to some dishes.”

Jackson, sitting on a stump and talking about the day’s hunt, sniffed one of the oysters.

“They have almost a light anise sorta scent and flavor to them. You can cook them a hundred different ways. Frying them in butter is the classical preparation. You can make a nice soup with them and stuff things with them. There’s a ton of great ways to prepare oysters.”

Heinlein, a lifelong Johnstown resident, and Jackson, who, until last year, lived in Ligonier, spend countless hours every year, searching the local woods for mushrooms, a hobby they both gained an affection for at a young age.

“My dad got me into mushrooms, picking morels, and chicken (of the woods) and sheep’s heads,” Heinlein said. “I just kinda took it further and started teaching him about mushrooms eventually.”

The passion, for Jackson, came from his grandfather.

“About 6 years old, I’d go out with my grandfather to hunt morels,” Jackson said. “That was like my favorite thing to do, go out there. It was like an Easter egg hunt with all the old guys. We’d come back and fry them up.”

Nowadays, Jackson and Heinlein are the seasoned foragers passing along their knowledge to beginners, including possibly the most important piece of advice – never, ever eat any foraged food unless you know for certain it is edible.

Heinlein wants to set up a Johnstown-area mushroom club by next year, something similar to the larger Western Pennsylvania Mushroom Club.

He has already established a Facebook group – My Life as a Mushroom.

“I just set it up for people to come there,” Heinlein said.

“If they have questions about mushrooms, they can ask and get stuff identified. A lot of times, we’ll even hook up with other people, just take them into the woods. It’s – all in all – just a fun thing.”

Heinlein also supplies mushrooms to Johnstown’s Balance Restaurant, where he works, for dishes, such as the Cambria County risotto.

He currently supplies mushrooms to about three dozen businesses in western Pennsylvania, including Myriam’s Table in Ligonier, Out of the Fire Cafe in Donegal, Oakmont Country Club and Westmoreland Country Club.

“I kinda saw the demand there for local wild mushrooms at the restaurant level, and even at the grocery stores and retail level,” said Jackson, who earned his mushroom foraging certification in Michigan. “I just decided to go all in and see what I could do with it.”

Creating the business has given Jackson the opportunity to expand his involvement with what he described as the “fun” activity of mushroom picking.

“I enjoy it,” Jackson said. “I go out about three days a week still. That’s my favorite days of the week. I enjoy selling the stuff too. Don’t get me wrong. I like being out there and working with people, and seeing how much they enjoy the stuff. But I like the solitude. I like the peace. I like the smell, you know. There’s just something to being out here. It’s relaxing.”

Jackson is also working to get a mushroom licensing process in Pennsylvania.

In The Spotlight | Raise a toast: Johnstown man honored for speaking, mentoring

Lawrence H. Olek is the toast of Johnstown.