Students from Tufts University near Boston, Mass., (from left) Carlos Irisarri, Elliot Lam and Arjun Padalkar visit the statue of Joseph Johns, the founder of Johnstown, in Central Park, on Tuesday. 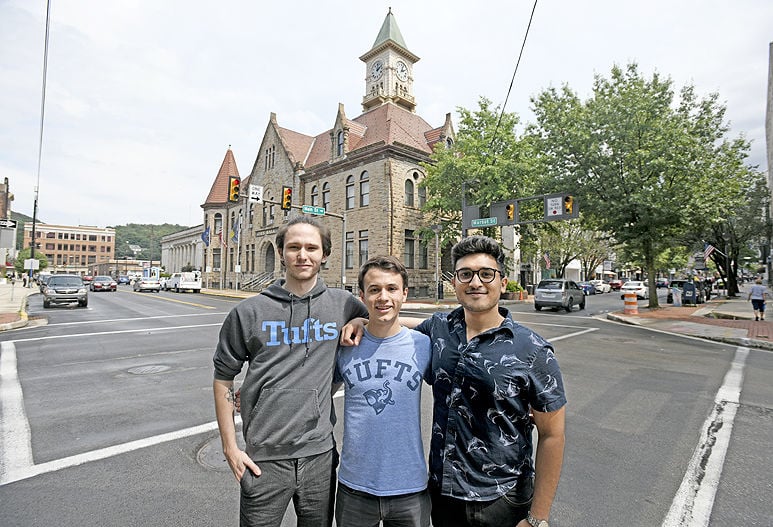 Students from Tufts University near Boston, Mass., (from left) Carlos Irisarri, Elliot Lam and Arjun Padalkar visit the statue of Joseph Johns, the founder of Johnstown, in Central Park, on Tuesday.

Johnstown’s narrative will soon be told by a trio of college students who have been researching the area in hopes of sharing a different perspective on the city with a Rust Belt reputation.

Carlos Irisarri, Arjun Padalkar and Elliot Lam are entering their junior year at Tufts University in Massachusetts, and have been in Johnstown for the past month to examine the area in an effort to get a true feel for the city that has survived three major floods and the decline of its steel industry.

“We noticed that there’s a big disconnect in coastal cities where they don’t understand the Midwest, or the Rust Belt specifically,” Irisarri said.

The students’ original plan was to research Rust Belt areas by spending two to three days in specific locations to get a clearer picture of what is actually occurring in these areas that have been painted as a declining and depressed demographic.

After realizing that a few days in any town wouldn’t provide them with a genuine understanding of the area, the students decided to select one city to focus on, which would then give them a whole month to get familiar with that community.

The question for the group soon became: What city do we want to spend an entire month in?

The trio narrowed their search to a few locations such as Muncie, Indiana, and Lima, Ohio. But after learning more about the Greater Johnstown area, it became an easy decision for them.

Statistics portraying Johnstown as the poorest city in the commonwealth, along with the disappearance of the area’s steel industry and a declining population jumped out at the college undergraduates.

“We were a little bit worried about what our time in Johnstown was going to be like,” Irisarri said. “It just didn’t look good for Johnstown.”

Once the group decided to make Johnstown their focal point, it was time to find a place to stay in the area. This is when the group came across a local Airbnb owned by Leah Spangler, CEO of The Learning Lamp.

Spangler, who is actively involved in the region, played a key role for the group as she helped to lay out a map of what sites to visit and key people to speak with while in the area.

“She deserves all the thanks from us, because she basically started us on who to talk with,” Irisarri said. “That was a great start, and then we began to find our own contacts.”

Lam said: “Everybody has been so super helpful to us since we have been here. I think it really goes to show, at least for me as a personal takeaway, that despite any of the things that people from the coast or people would write about, you have to realize or at least we really quickly realized how good the community is here. And that should be recognized.”

The students have interviewed business owners, city leaders and community stakeholders. The group has even found a “second home” at Flood City Café in downtown Johnstown to satisfy their appetites.

Now in their fourth week in Johnstown, the trio have collected more than 30 hours of interview content, conducting two to three interviews daily.

“We came to Johnstown having no idea what it was going to be like,” Irisarri said.

“Our first two weeks, we heard a lot of positives. I mean like an impressive amount of positives for Johnstown. So much so that at the end of our second week we could not understand why all of these bad articles had been written on Johnstown.

“This town seemed to be like a hidden gem for us,” he said. “Johnstown is about to explode, and we’re really glad we came now because in five years there will be 20 books about Johnstown.”

Heather Barry, associate director for the Institute for Global Leadership at Tufts University, said she is proud of the students’ recent efforts and looks forward to hearing more about their experiences in Johnstown.

“Part of the mission of the Institute for Global Leadership is to help students connect theory to practice, to take what they learned in the classroom out into the world to test their thinking,” Barry said. “It is critical for students to understand issues directly from the people who are living them, to see beyond generalizations, statistics and regions. To see Johnstown’s unique story in the context of these larger issues affecting the country.

“We’re really proud of their dedication to this issue and they are so excited to be talking to everyone there and are amazed and deeply appreciative of the warm reception.”

During their month in Johnstown, the students visited several places and organizations and also had the opportunity to attend various events in town such as Sunday on the Square and the AmeriServ Flood City Music Festival – all helping to paint a bigger picture of the area.

With having so much positive feedback with their in-town interviews, week 3 for the students began with taking a new approach on whom they would seek out for interviews.

Irisarri said: “We have heard all of these positive things and realized that our research was overwhelmingly skewed toward the positives, and we wanted to hear the other side of the coin. So we really spent a lot of our time looking for people who maybe didn’t have the same opinion about Johnstown, who could tell us what problems were really systematic in Johnstown.”

While the majority of the feedback the students received from their local interviews painted Johnstown in a positive light, they did, however, notice that the area is heavily divided with its numerous municipalities, which then caused the group to question why there is so much division in such a small area.

Lam said: “For the voting population, if they want to do this properly and really make it so that everyone is in it together – we think that consolidation is really the answer.”

The Tufts students are now wrapping up their time in Johnstown and will be heading back to their Massachusetts campus on Monday.

Following an assessment of their month here in the area, the group plans to share their content through a collection of short stories.

“Our goal is to give a megaphone to the stories of Johnstown that paints an accurate picture of what Johnstown is, and what it is becoming,” Irisarri said. “Based on the information we have, I think we will be able to do that because the stories in this town are amazing.

“One thing that is very clear for us is that the steel mills are Johnstown’s history, but are certainly not Johnstown’s story today,” he said. “Our main takeaway is, without question, that Johnstown is on the up and up because there are private individuals that have taken it upon themselves to improve the community.”