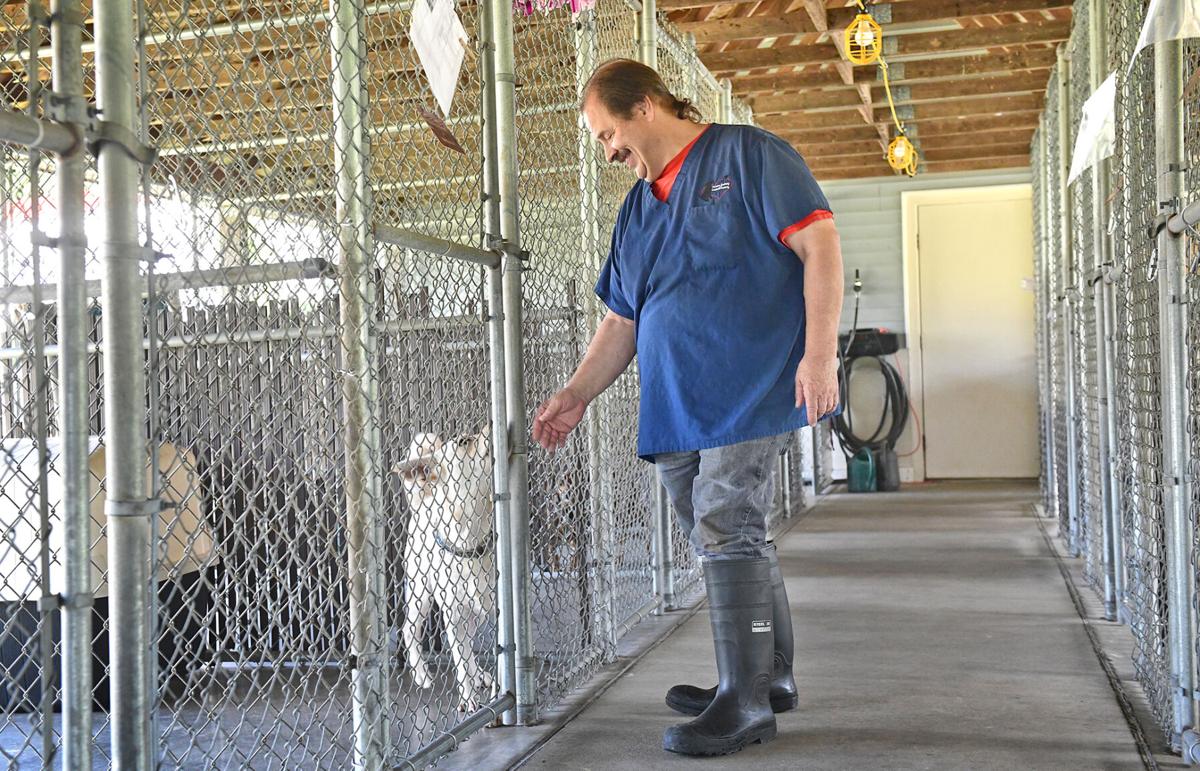 David Pundzak, animal caretaker for the Cambria County Humane Society, walks through the outdoor kennel to visit with Bianca, a Labrador retriever mix, at the facility in Richland Township. July 15, 2020. 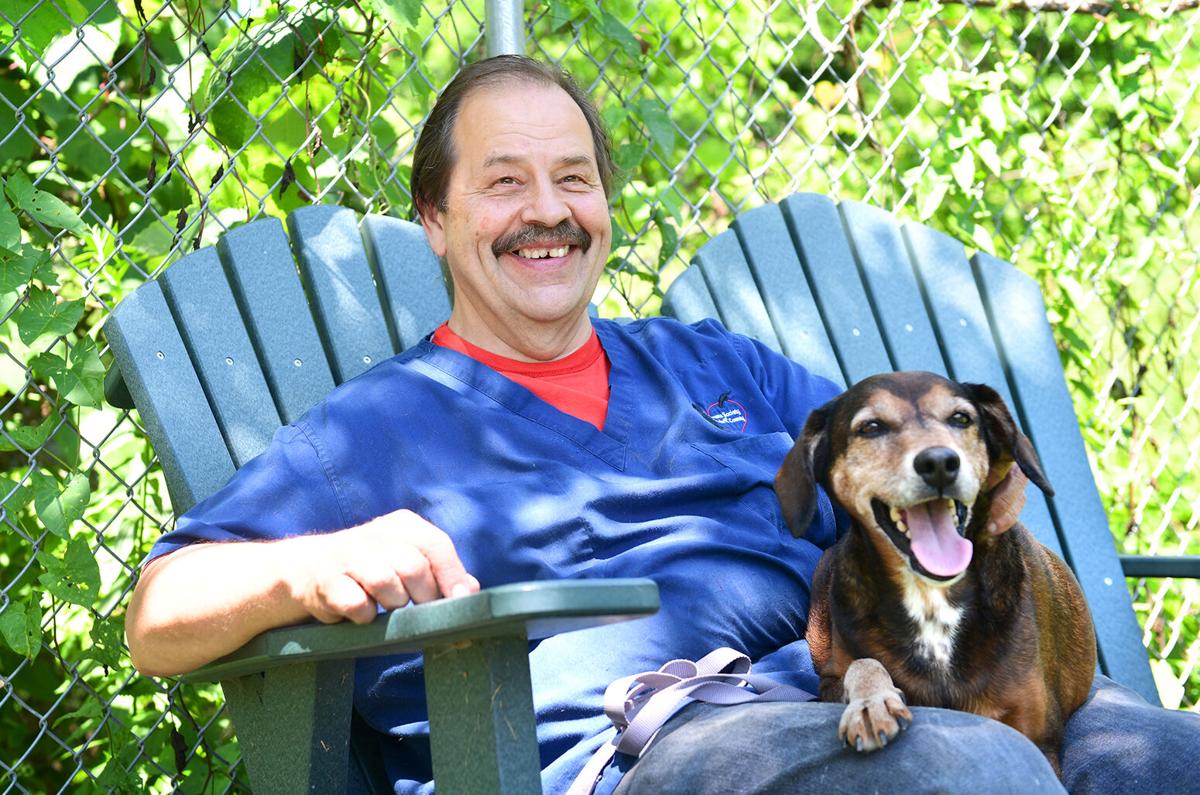 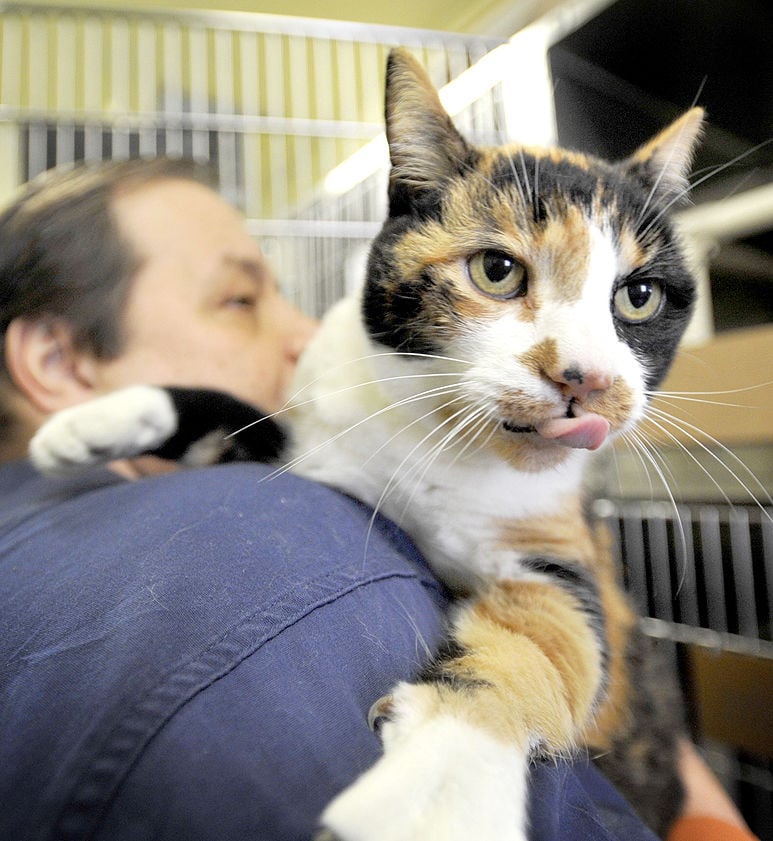 Heidi, a 12-year-old, checks out the kennel area on the shoulder of worker David Pundzak on Thursday, Feb. 23, 2017, at Humane Society of Cambria County in Richland Township.

Dave Pundzak, of Cambria County Humane Society, carries a cat wrapped in a blanket from a home in the Coopersdale section of Johnstown on Dec. 15, 2017. 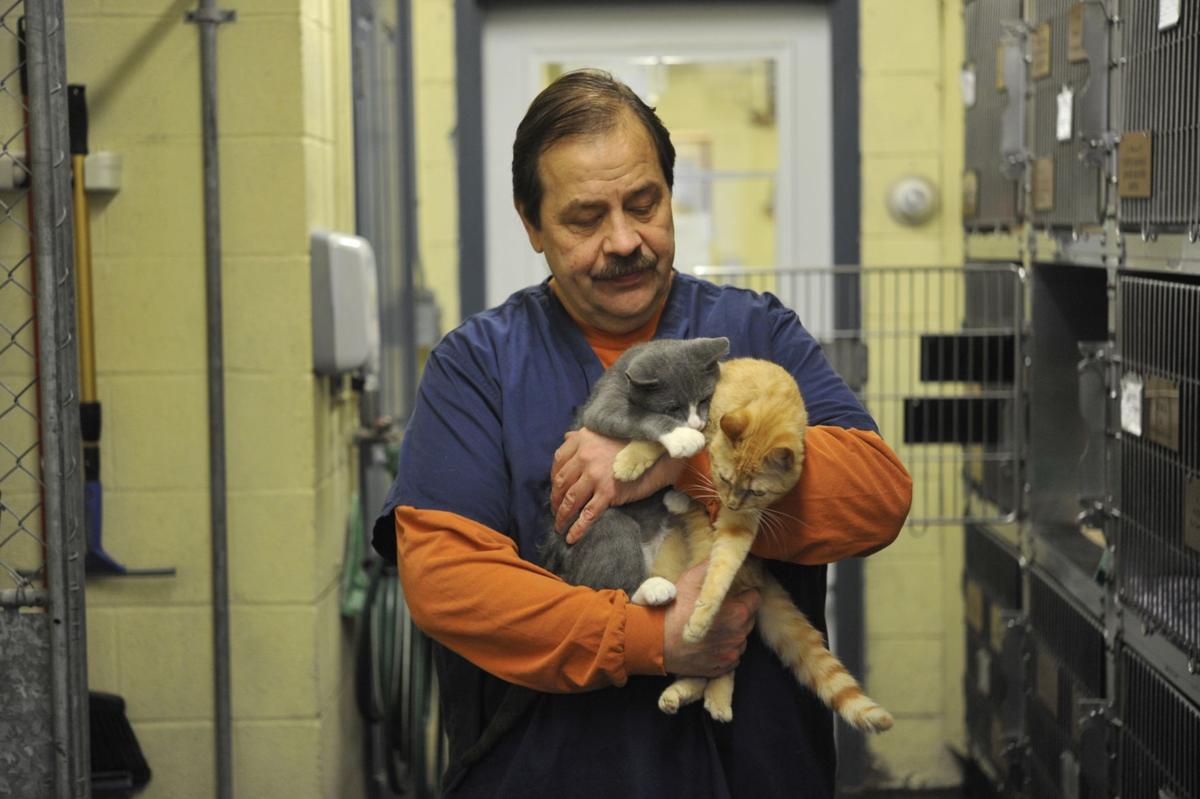 Dave Pundzak, of Cambria County Humane Society, carries a cat wrapped in a blanket from a home in the Coopersdale section of Johnstown on Dec. 15, 2017.

As a contracted animal control officer, he is busy handling animal complaints in 10 municipalities. He has encountered dogs, cats, rabbits, a snapping turtle and occasionally a hawk or iguana.

But admittedly canines are his passion.

“Of course I love these animals,” he said, with a dog jumping onto his lap. “These dogs need affection and that’s why they get all excited and jumpy.”

As an animal control officer, Pundzak sometimes has unpleasant duties. He assists the county coroner after a pet owner dies.

“The first call will be to check on the welfare of the individual,” he said. “Then we find out they passed away and they have a dog or a cat.”

Other times it’s caring for a sick or injured animal.

“If it’s after hours and you can’t get the emergency vet, you have to stop the bleeding and do the best you can,” he said.

“The hardest part is when they have to be put down.”

Pundzak said he took 40 animal complaints in June and had 35 calls this month as of July 16.

Many are for stray cats.

“They’re everywhere, because cats are having their babies.”

The best advice Pundzak offers residents is to have pets spayed or neutered to prevent them from reproducing.

Pundzak has had interesting encounters – but none more peculiar than when an iguana escaped from a Morrellville home two years ago.

“I love animals,” Pundzak said. “But the iguana was freaky, because I don’t really handle lizards.”

Pundzak, who also is a Dale Borough councilman and the borough’s emergency management coordinator, said the 5-foot-long female iguana escaped a home after the owner left the window open on a 90-degree day.

“She must have had the window open a crack and it got out,” he said, “and of course it freaked out the neighbors.”

Pundzak said when he found the iguana, he wasn’t sure what do. So he Googled the creatures on his cellphone.

“It said to approach it from the side and talk calmly,” he said. “If it starts to hiss, you back away.”

Pundzak said he softly stroked the spikes along its back until the iguana became docile.

“It’s quite a beautiful animal,” he said.

Last year, he found a injured hawk lying in an alley in Cambria City after the bird had been struck by a vehicle.

“I don’t really handle birds, so I Googled it really quick,” Pundzak said.

He was able to corral the bird into an animal carrier and contacted the Pennsylvania Game Commission, which sent out a conservation officer.

“I guess it didn’t make it because they X-rayed it and it had a broken wing and internal damage,” he said.

Last year, he found a large snapping turtle that had crawled up the river bank near Sheetz on Broad Street. The turtle was trailing a mother goose and her goslings.

“I guess it was trying to grab one of the babies,” he said.

A man who had a pickup truck offered to take the turtle and release it farther down the river.

“I let him take it,” Pundzak said.

He has no plans to slow down. Caring for animals is his passion.

In The Spotlight | ‘History all around’: Westmont grad brings passion for the past to post at JAHA

Amy Regan has taken her passion for history and turned it into a career.