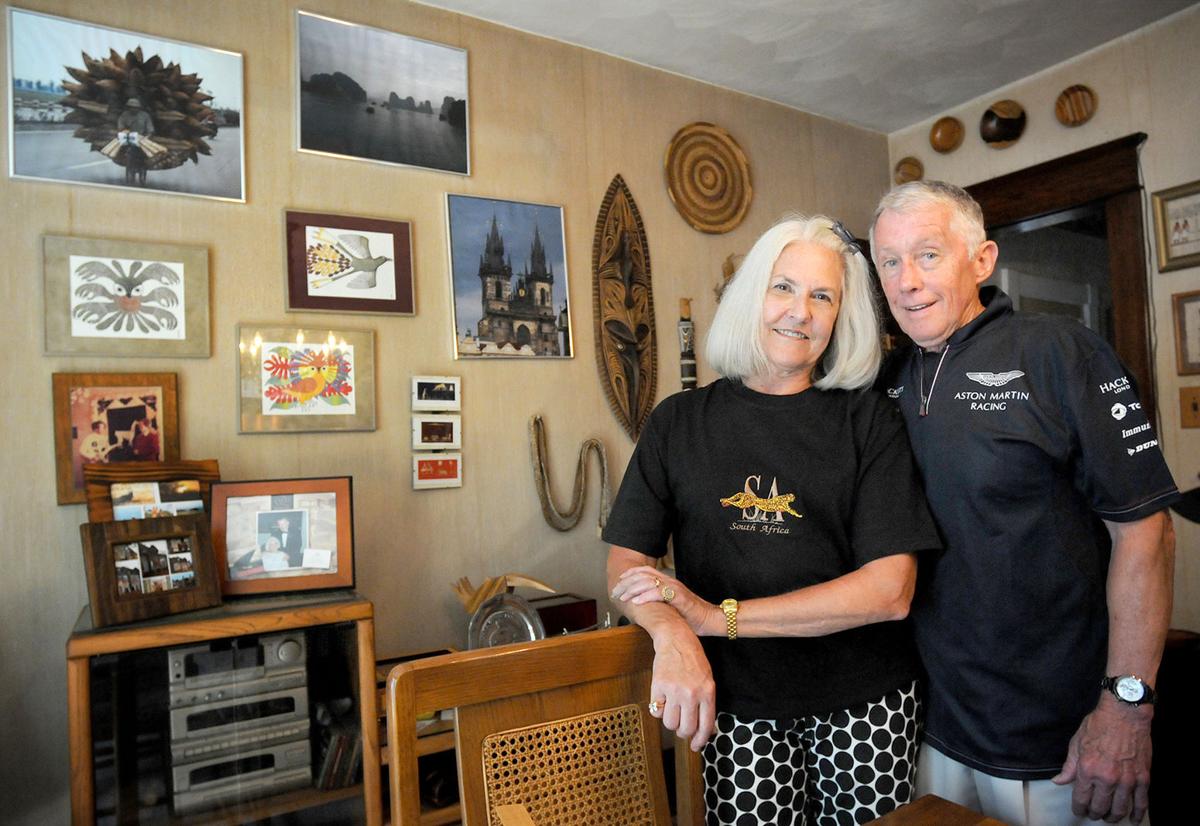 David and Cindie Petersen, of Westmont, pose in their dining room with artifacts and photographs taken during their travels over the years. 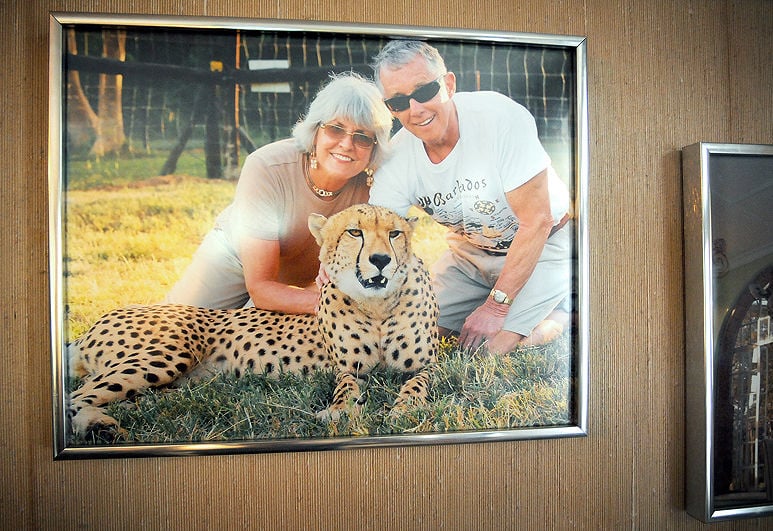 Cindie and David Petersen pose with Juba, a cheetah, during a 2012 trip to a big cat conservation center in Zimbabwe.

David and Cindie Petersen, of Westmont, pose in their dining room with artifacts and photographs taken during their travels over the years.

Cindie and David Petersen pose with Juba, a cheetah, during a 2012 trip to a big cat conservation center in Zimbabwe.

To say David and Cindie Petersen are well-traveled would be an understatement.

The Westmont couple have traveled to 93 countries, visiting many more than once, on their journey to see all world has to offer.

It has become a passion for the two.

“We love the photography and wildlife – that’s a big thing now with a lot of our trips,” said 71-year-old Cindie Petersen.

“Not everyone gets to experience a National Geographic photo for real, but we’ve been able to do that. We’re very much into the conservation of wildlife; we want to see the animals and be able to tell people about them before they’re not here.”

The couple got bit by the travel bug in 1967 after booking their honeymoon to Nassau, Bahamas.

A few years later they joined a travel club and went to Mexico, London, Paris, Amsterdam and Africa.

“We started to enjoy travel and just started booking and planning trips,” David Petersen, 75, said. “Everything started to add up, and we’d say let’s try this place or that place.”

They’ve had the pleasure of seeing polar bears and beluga whales in Churchill, Canada, and baby seals on an Canadian ice pack; they’ve walked with lions and rode elephants in Africa; and played with tigers in Thailand.

Both are certified scuba divers and have done dives throughout the Caribbean, the Red Sea and around the remote islands of Papua New Guinea, documenting their adventures with photographs.

“In Thailand we took the Orient Express twice to Singapore and it was an amazing experience,” David Petersen said. “We did a trip to South Africa where we did Botswana and Zimbabwe and got to see Victoria Falls, the largest waterfall on Earth.”

A highlight from their African trip in 2016 was a visit to Giraffe Manor, which is a small hotel in Kenya that serves as a home to a number of endangered Rothschild giraffes and operates a breeding program to reintroduce breeding pairs back into the wild.

Guests are able to get up close and personal with the giraffes.

“Giraffes are my favorite animal, and it’s always been on my bucket list to go to Giraffe Manor,” Cindie Petersen said.

“It was an incredible experience. The giraffes poke their head in for breakfast and they reach up to your rooms to get their treats.”

Another highlight was seeing the African painted dogs while on a safari.

“No one sees them on safari, and we saw a whole pack of them,” David Petersen said.

The most recent trip took them to Africa in February, where they spent three weeks in Botswana, Zimbabwe and Namibia.

“We did Walvis Bay on the west coast of Africa and we did the Namib Desert, the oldest desert on Earth, and we climbed one of the highest sand dunes in the world,” David Petersen said. “We did a lion experience and Victoria Falls again, the Chobe National Park and the Okavango Delta.”

Traveling to Africa didn’t require much in terms of medical preparations.

“Our first trip we had to get a yellow fever shot and that was it, now it’s nothing,” David Petersen said. “When you cross the border from Zimbabwe into Botswana you have to walk through a puddle of sterilized water so you don’t bring in any whatever with you. Like that’s really going to help, but the people do it.”

To celebrate their 50th anniversary, the Petersens will be making their sixth trip to Africa in February.

As for future adventures, the pair would like to cross off the Arctic, Patagonia, Iceland, Chile, Easter Island, Devil’s Island and St. Helena on their travel hit list.

And for those who are wanting to travel, the Petersens offer some simple advice.

“Go, just go,” Cindie Petersen said. “If you have the opportunity, go.”

In The Spotlight | ‘He’s down there with gloves and a smile’: Pastor betters community through volunteer work

Peter Helmers is not afraid to pitch in and help with hard work.