The wall of the wrestling room at Bishop McCort Catholic High School is shown on Dec. 19, 2015. 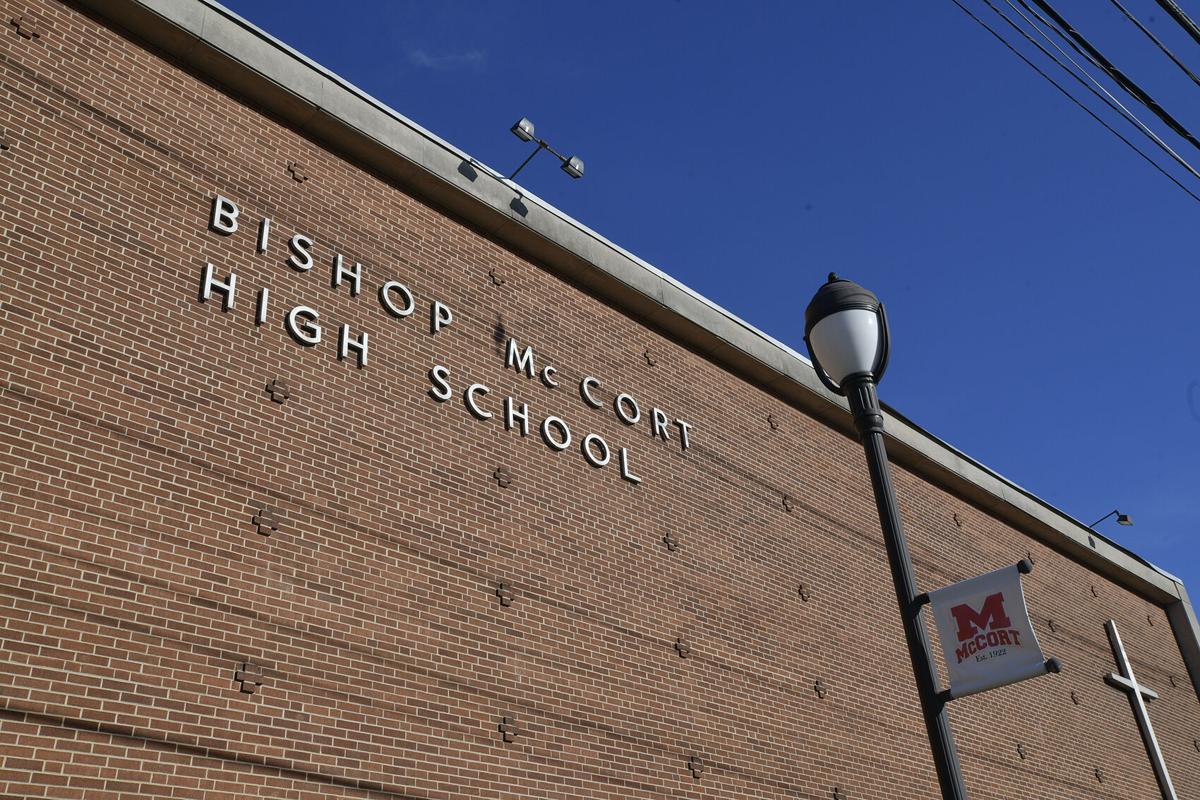 The exterior of Bishop McCort Catholic High School in Johnstown is shown on Wednesday, Jan. 12, 2022.

The wall of the wrestling room at Bishop McCort Catholic High School is shown on Dec. 19, 2015.

The exterior of Bishop McCort Catholic High School in Johnstown is shown on Wednesday, Jan. 12, 2022.

JOHNSTOWN, Pa. – An attorney representing Bishop McCort Catholic High School’s suspended wrestling coach and 10 families with wrestlers in the program is seeking an injunction to halt an order that prohibits the school from competing in postseason tournaments.

A civil rights suit argues that the Pennsylvania Interscholastic Athletic Association violated the young wrestlers’ rights by imposing the penalties, which were handed down late last year against the school for violating the athletic association’s rules regarding recruiting and school transfers.

The suit and injunction request follows years of accusations that the private Catholic high school in Johnstown has recruited student-athletes. In this specific case, several PIAA hearings resulted in a statewide board of directors upholding District 6-level sanctions and imposing to impose a two-year postseason ban for the wrestling program, along with coach Bill Bassett’s suspension over the same span and all McCort athletics being placed on probation for three years.

Nazareth-based attorney Joshua Mazin filed the motion on behalf of Bassett and families of McCort wrestlers listed between seventh and 12th grades – most of whom transferred to the school since November 2020.

In the filing, some wrestlers indicated they transferred after being home-schooled.

One former North Carolina family cited the decision to move their son to the area and district to be closer to a daughter attending Mount Aloysius College in Cresson.

In many other cases, students listed their decision as “academic or social reasons” – many of them arriving from Forest Hills School District, in a community where Bassett has served as a coach for the Ranger Pride club wrestling program.

In the lawsuit, Mazin wrote that more than 60% of the wrestlers joined McCort’s program before Bassett was hired at the school – in some cases, three months earlier.

He said the PIAA gave the school and its students little chance to defend itself and prepare for the hearings.

And he described the punitive rulings as “draconian and factually-unsupported.”

The sanctions punish the students who are now “suffering from stress and anxiety,” Mazin added, writing that the sanctions also could impact the students’ opportunities to obtain wrestling scholarships.

“No evidence was presented that could support a determination that any of the Plaintiffs engaged in any conduct that was violative of the PIAA’s Constitution, By-Laws, or any other PIAA Rules and Regulations,” Mazin said.

The lawsuit states that the penalties are among the harshest the association has ever imposed.

PIAA board members have stood by the decisions, which were upheld in a statewide PIAA appeal hearing in December. They’ve said hundreds of pages of evidence was compiled against the school’s wrestling program.

“The District 6 Committee sometimes has to make tough decisions,” District 6 member William Marshall said at the time. “We’re committed to upholding the by-laws and constitution of the PIAA for all its member schools. We will continue to stay committed to that cause and partner with all of our member schools to try to assure that they’re all adhering to those by-laws and the constitution.”