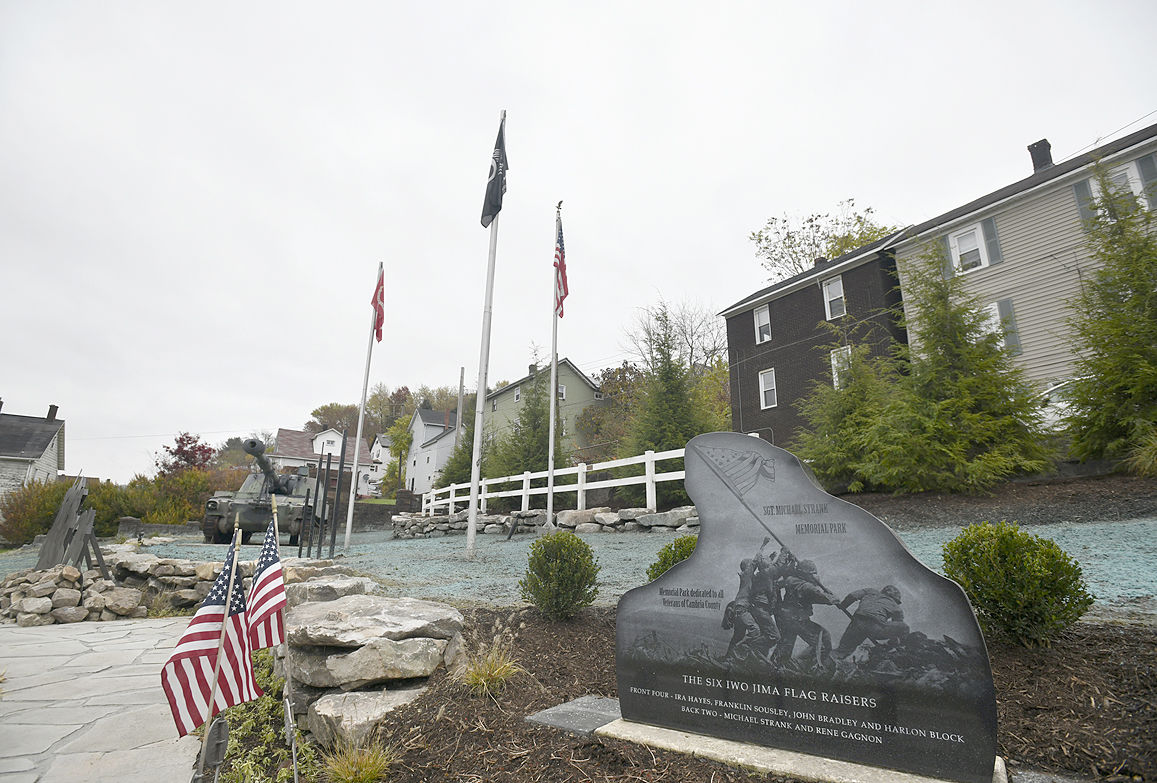 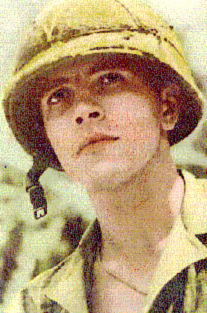 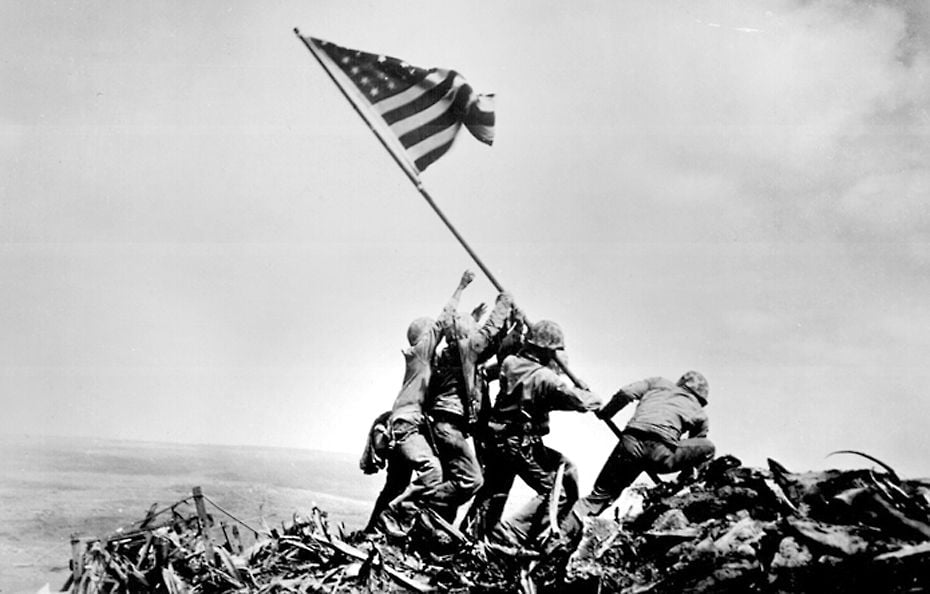 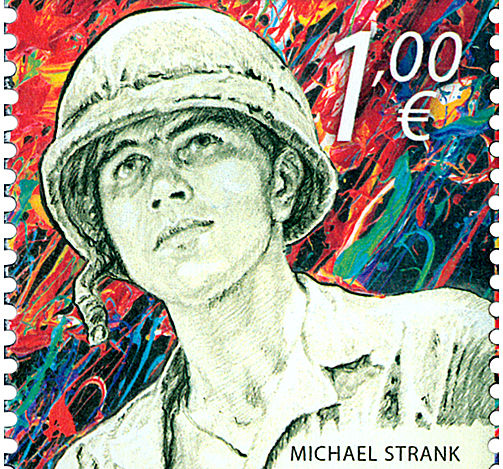 Slovakia’s state-owned postal service is honoring the late Marine Corps Sgt. Michael Strank with a stamp that was issued March 1, 2019, according to The Slovak Spectator newspaper.

Slovakia’s state-owned postal service is honoring the late Marine Corps Sgt. Michael Strank with a stamp that was issued March 1, 2019, according to The Slovak Spectator newspaper.

Michael Strank was a Czechoslovakia native with Carpatho-Rusyn heritage, beloved family member, immigrant, Franklin Borough resident, devout Byzantine Catholic, Marine’s Marine and an individual who – in less than a second – was immortalized in what may be the most famous photograph ever taken.

All of those aspects of his life will be celebrated during upcoming ceremonies marking the 100th anniversary of his birth – Nov. 10, 1919.

Born Mychal Strenk in the village of Jarabina, located in the present-day Slovak Republic, Strank fought in the Battle of Iwo Jima during World War II. On Feb. 23, 1945, he and five military comrades planted an American flag above the hellish volcanic landscape of Mount Suribachi, while an intense battle against the Japanese still raged.

Associated Press photographer Joe Rosenthal snapped a picture of the flag-raising that soon became known across the United States, providing inspiration to a war-weary nation.

The photograph was the inspiration for the design of the Marine Corps War Memorial in Arlington, Virginia.

“It demonstrated American military might and seemed to promise Allied victory and an ultimate end to the war,” said Marine Corps History Division historian Breanne Robertson.

Strank died on Iwo Jima days later, March 1, never knowing the inspiration he provided the nation. His legacy lives on in Jarabina, the Johnstown region and within the spirit of the Marine Corps.

Local events, involving dozens of organizations and individuals, will be held to honor Strank next weekend.

“It’s very satisfying to see the community outpouring recognizing that we have in Johnstown a true American hero,” said Robert Eyer, president of Veterans Memorial Monument Inc., which, for years, has played an important role in preserving Strank’s memory.

On Saturday, Nov. 9, beginning at 1 p.m., the memorial park in Franklin will be rededicated to Strank with a new metal silhouette cutout of the flag-raising – made by JWF Industries – on display.

Later on Saturday, the Johnstown Tomahawks hockey team will pay tribute to Strank and other veterans during their 7 p.m. home game at 1st Summit Arena @ Cambria County War Memorial.

“The premise that I’m going to be using in the sermon is quite simply talking about everlasting life,” said the Rev. Robert Oravetz, from Holy Trinity. “That we live our current life as well as we can in the teachings of Jesus Christ, and that certainly was what everyone has been attributing to Michael Strank.

“We look forward to someday, when we look at everlasting life, to likewise be commemorated positively as we want to make sure that we’re doing on his 100th birthday.”

A free showing of the Strank documentary “Our Flag Still Waves,” made by Wix Pix, and the motion picture “Flags of Our Fathers,” based off the New York Times bestselling book by James Bradley, will be shown at Westwood Plaza Theatre, beginning at 1 p.m. Seating is limited to about 180 people.

“Our Flag Still Waves” and “From Ashville to Pearl Harbor,” a Wix Pix documentary about Ashville resident John Lipple, who died during the attack on Pearl Harbor, will be broadcast on WPSU public broadcasting television, starting at 8 p.m.

Then on Monday, special recognition will be given to Strank during the Veterans Day parade and ceremony in downtown Johnstown with birthday cupcakes handed out to the first 300 people in Central Park. The parade begins at 4 p.m.

“You can’t let a 100th birthday go by and not do something about it, especially with Mike Strank,” said Wix Pix owner Dale Wicks, who has led the local effort to commemorate the centennial anniversary.

Going forward, plans are in place to put up signs and banners in Johnstown honoring Strank. A 5-foot-by-8-foot United States flag, the same size as the Iwo Jima flag, will be displayed near the Inclined Plane observation deck. Teachers will receive online access to “Our Flag Still Waves” for their classes.

“This is not intended to be ‘Oh gosh, Mike Strank’s 100th birthday. Isn’t that nice. Now it’s over.’ The idea is to say, ‘OK, there’s a reason for us to remember that for years to come,’ ” Wicks said. “Part of those efforts are the access for the teachers. Part is signs coming into Johnstown, which will eventually be put up, that will show the silhouette of the flag-raising and say, ‘Johnstown, Pa., home of Sgt. Michael Strank, Iwo Jima flag-raiser.’ ”

Meanwhile, on Sunday, in Triangle, Virginia, about 70 members of the Strank family and other special guests plan to meet for a liturgy and reception.

The religious service will be held at the Semper Fidelis Memorial Chapel, located at the Marine Corps Heritage Center.

The Rev. Francis Rella, a former Marine and current pastor of Our Lady of Perpetual Help Byzantine Catholic Church in Toms River, New Jersey, will celebrate the liturgy. The Slava men’s choir from Epiphany of Our Lord Byzantine Catholic Church in Annandale, Virginia, will participate in the English-language service. Ivan Bulík, the cantor from the church in Jarabina where Strank was baptized, will sing the epistle and hymns in his native language.

Ambassador of the Slovak Republic to the United States Ivan Korčok has accepted an invitation.

“It should be – I am sure – just a wonderful celebration of remembrance,” said Kathy (Strank) Kasper, Strank’s niece, who has organized the event.

Kasper, her sisters, Karen (Strank) Costlow and Carol (Strank) Bauer, along with relatives from several states, including Pennsylvania, Florida, Illinois, Virginia, Wisconsin and Alabama are expected to attend.

“We all want to remember,” Kasper said.