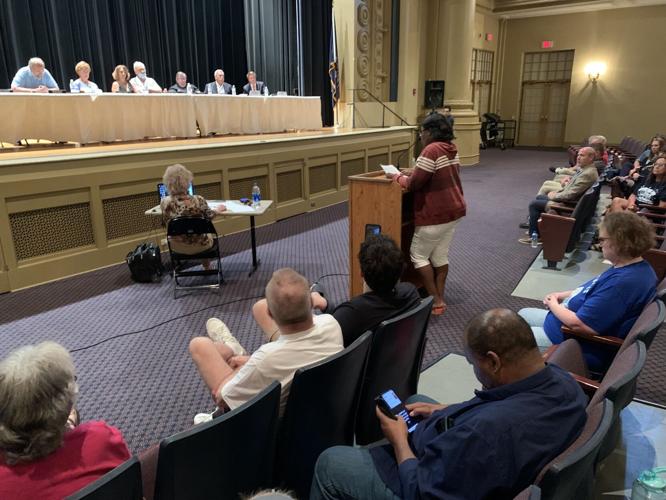 Greater Johnstown mother Magdalene James shares her thoughts with the panel of school board members and public officials at the Tuesday, June 14, 2022, town hall in the high school auditorium. 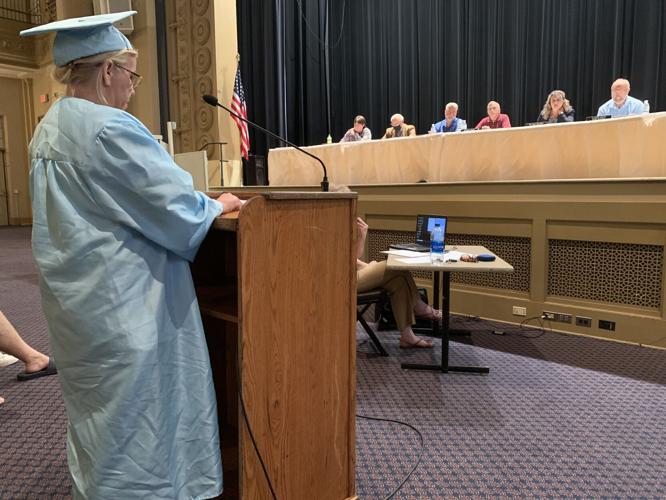 Greater Johnstown mother Magdalene James shares her thoughts with the panel of school board members and public officials at the Tuesday, June 14, 2022, town hall in the high school auditorium.

JOHNSTOWN, Pa. – Eugene Pentz, Greater Johnstown School Board president, opened Tuesday’s town hall meeting at the high school with a request for suggestions on how to return the district to its core values of “Pride and Tradition.”

“We want to hear solutions,” he told the crowd of about 50.

Pentz said that if the panel of school directors and public officials could get two or three outstanding recommendations by the end of Tuesday’s gathering, it would help a lot.

Following their remarks, one after another, members of the audience took turns at the podium addressing the panel. Some shared their thoughts on improving the schools, and others commented on problems within the district.

Haily Gaydos, a 13-year-old student, spoke about bullying – a topic she said has plagued her for some time. She suggested the district spread more awareness about the goings-on inside the school buildings; offer rewards to those who report bullying; and get volunteers to patrol the halls and community to help ease the problems, such as fighting, that have haunted the district this year.

The teenager was one of 11 who addressed those on stage.

John DeBartola, a community member who has strongly advocated for this type of gathering, provided his own set of solutions to the group.

“This needs to be an all-hands-on-deck approach,” he said.

DeBartola advised the board to charge students who engage in fights criminally and to require those who participate in physical altercations, and their parents, to enroll in district- provided anti-violence or anti-bullying training in order to return to school. He also brought up a U.S. Department of Justice program that provides grants to curb school violence.

DeBartola said he was shocked and thrilled the event happened. However, the local advocate worried that the town hall took place after the board approved changes to the school day schedule, altered the district’s cellphone policy and entered a one-year lease with the Diocese of Altoona-Johnstown for the former St. Patrick’s Catholic School to house the alternative education program.

Other speakers focused on more accountability for students and the need for a stronger code of conduct to provide that remedy.

In about 45 minutes, when the sign-up sheet was exhausted, Pentz thanked the crowd for attending and adjourned the gathering. The panel did not immediately respond to any of the comments.

Arcurio said it appeared the board took a listening role for this event, noting that the goal was to open the floor to those rarely heard from.

During her speech, she commended the administrators’ and board’s plans for returning to the “Pride and Tradition” of Greater Johnstown. But she also expressed concerns about a planned change to the school day that implements an early dismissal on Fridays, because she said the students need every minute of instruction they can get.

When Behe was asked to yield to the next speaker because she went over the the allotted three minutes to talk, she inquired about why the public wasn’t given more time.

Parent Magdalene James asked the same question when she went past the limit and was repeatedly asked to stop by Pentz before a school resource officer stepped in to remind her of the event’s rules. She said she hoped the board heard what the community had to say and would reach out to parents more.

“What was said tonight will be taken under advisement,” Dadey said afterward.

One aspect of the meeting he wants to review is the calls for an updated code of conduct.

Dadey also said he and his fellow school directors respect the parents who got up and spoke on Tuesday.

What Long took from the town hall was that the district has a crisis, but he said he thinks what Greater Johnstown deals with isn’t much different than any regional school.

He commended the board members for their readiness to listen and was pleased to hear suggestions of more accountability from the audience.

Although the DA’s office can be of the most help on criminal matters, Long said he’d be glad to assist district leaders in adding more teeth to their code of conduct, if that’s what they want, and is willing to serve on committees to help out.

“I’m not sure we can help in every way, but we want to help in any way possible,” he said.

“There’s a lot of issues out there in the community,” Janakovic said. “But we’re not backing away from them. We want to face them head on.”

Public speaks out about violence, student safety at Greater Johnstown School Board meeting

Several members of the public and staff took turns speaking at Tuesday’s Greater Johnstown School Board meeting to address safety, fighting and other matters within the district.