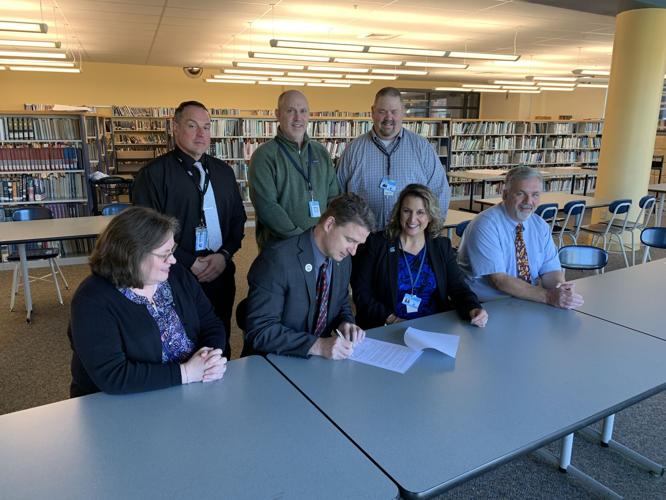 Culinary arts students at Greater Johnstown High School will soon be able to leverage their lessons directly to the local workforce, or possibly to a degree, thanks to a new partnership agreement with Pennsylvania Highlands Community College.

On Monday, officials from both institutions met at the district building on Central Avenue to formalize the affiliation.

He described the new partnership as very broad and a great opportunity for all involved.

Greater Johnstown culinary students will begin the Penn Highlands pathway as freshmen and continue to bank credits until graduation – similar to the dual-enrollment associate’s degree track.

Upon getting their high school diplomas, they’ll also receive ServSafe certificates that will allow them to enter the workforce.

Those interested can also complete three more semesters at PHCC after graduation to finish an associate’s degree in culinary arts – or continue their training at Penn Highlands and possibly move on to a four-year degree.

During their training in high school, they’ll be able to take classes and hone their skills at a new college restaurant facility on the 400 block of Main Street in Johnstown – where they’ll focus on plating, preparatory abilities and other training.

“It will allow them to really develop their passion and art,” Geisweidt said.

This work will also lead to internships with several local restaurants while the students train.

There are 38 high school students enrolled in the Greater Johnstown program.

Amy Arcurio, district superintendent, said Greater Johnstown prides itself on being innovative and responding to the community’s needs, and this additional pathway is an example of that.

She added that students can leave the district well-prepared for culinary careers or to further their education in the field.

The program also creates opportunities for families to support their children in post-secondary endeavors without committing to four-year degrees, which can sometimes be difficult, Arcurio said.

He said the potential impact of the program is significant and that the partnership with Greater Johnstown is exciting not just for the students, but also the community as a whole.

Geisweidt noted that this opportunity will not only help set up students for success, but also benefit the local restaurant industry, because the schools will be providing area businesses with trained professionals in various disciplines.

Nunez said the facility on Main Street will open in March, and the program with Greater Johnstown will launch next school year.

There will also be adult education classes offered at the restaurant location.