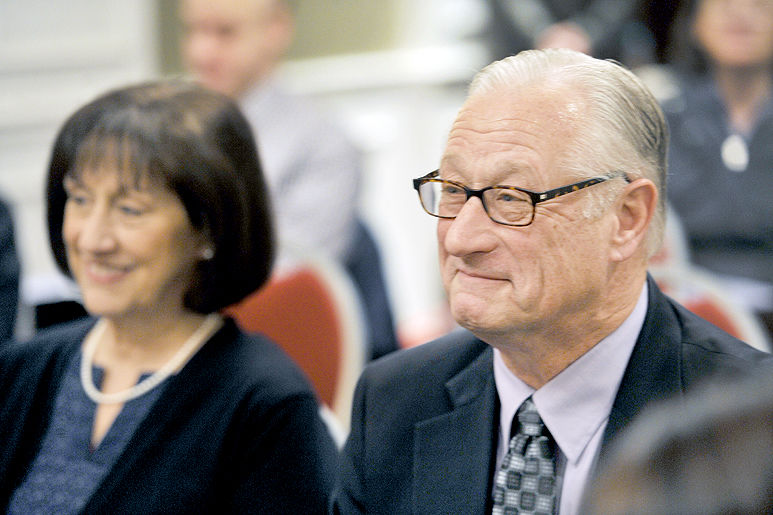 Pam McCoy (left) and Forrie Spangler are all smiles as their parents, Forrest and Nancy Spangler, were named posthumous 2018 inductees to the Greater Johnstown/Cambria Business Hall of Fame on Wednesday, Feb. 28, 2018. The elder Spanglers both passed away within four days of each other in June 2013. 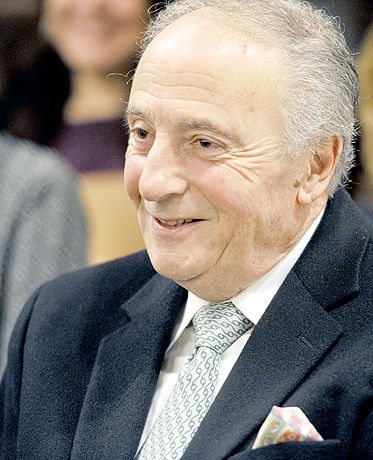 Pam McCoy (left) and Forrie Spangler are all smiles as their parents, Forrest and Nancy Spangler, were named posthumous 2018 inductees to the Greater Johnstown/Cambria Business Hall of Fame on Wednesday, Feb. 28, 2018. The elder Spanglers both passed away within four days of each other in June 2013.

The late founders of one of the nation’s oldest Subaru dealerships are two of five Johnstown-area business leaders who will enter the Greater Johnstown/Cambria County Business Hall of Fame this year, Hall of Fame organizers announced Wednesday.

“The Business Hall of Fame was founded on the principle that truly successful leaders are deserving of recognition not only for what they have achieved professionally, but for what they have given back to our community,” Patrick Bearjar, chief operations officer for Johnstown accounting firm Wessel & Co. and chairman of the 2018 Hall of Fame Awards, said during a press conference Wednesday morning.

“The 2018 laureates exemplify all of the qualities we strive to honor with this award.”

The Spanglers, both natives of Central City, founded Spangler Auto Body in 1953, working out of a rented garage on Horner Street in Johnstown. Forrest, a World War II veteran, worked on cars, while Nancy balanced the books and helped sand down auto bodies at night.

In 1970, they made the decision that would propel them into the upper echelons of the Johnstown business community. Japanese car manufacturers were then attracting dealers across the United States, and a little-known company called Subaru of America offered the only front-wheel drive vehicles coming out of Japan. Knowing the capabilities of front-wheel drive, the Spanglers decided to turn their business into a Subaru dealership.

Forrest worked as Spangler Subaru’s chief mechanic, sales manager and parts manager until 1975. He would spend his days with his sleeves rolled up, doing everything from changing oil to rebuilding engines and transmissions. At 5 p.m., he would go home to shower, eat a quick meal with his family and head back to the dealership to spend the evening on the sales floor.

“We know how hard they worked and how they loved the community,” Forrie Spangler said. “They were very dedicated to each other, and that was instilled into the people who worked with them. ... It’s very nice that this was bestowed on them. The whole family, really, is very proud of them.”

Even when their business was busiest, the Spanglers stayed involved in the community. Forrest was active in the Junior Chamber of Commerce, Kiwanis International and the Elks. Both Spanglers volunteered as Sunday school advisers at Christ the Savior Cathedral, where Nancy also served as president of the Parents and Teachers Guild.

Nancy Spangler volunteered at the Johnstown Area Heritage Assocation, becoming for many years “the face of the Johnstown Flood Museum.”

She thoroughly researched the history of Johnstown and often lectured in area schools and gave walking tours through the historical sections of the city.

The Spanglers passed away within a week of each other in June 2013.

town-based operator of shopping malls, from 1968 until its sale to Pennsylvania Real Estate Investment Trust in 2003. He then worked as a consultant for PREIT until his retirement in 2012.

“It’s an honor to be with these laureates, and also to be part of the past laureates,” he said. “A few of them have been mentors to me, so that’s a great honor. I was glad to do the service that I did in the community.”

He is also a trustee of Grandview Cemetery, a member of the Southmont Planning Commission, a past trustee of Mount Aloysius College, a past adviser for Junior Achievement of Western Pennsylvania and a former member of the International Council of Shopping Centers.

Antonazzo, a law school graduate and U.S. Army veteran, lives in Johnstown with his wife, Donna. The couple have four children and nine grandchildren.

• Brosig, who was not present at Wednesday’s press conference, is the retired vice president, treasurer, secretary and chief financial officer of Laurel Holdings, where he still serves as secretary, board member and minority stockholder.

He also serves as secretary of the Winston Corp. and is one of three trustees of the Anderson Walters Trust, which was formerly the majority owner of WJAC Inc. and the Johnstown Tribune Publishing Co.

He has held leadership roles on numerous boards of directors throughout the Johnstown area and has helped to organize the Greater Johnstown/Cambria County Air Show, the Johnstown First Night Celebration and a number of other community events.

A U.S. Air Force veteran, Brosig lives in Richland Township with his wife, Robbie. The couple have three children.

• Hummel, who did not attend Wednesday’s press conference, began his career in the 1970s as a disk jockey for Johnstown-area radio stations. In 1978, he moved into the advertising industry, and in 1990 he was recruited to become S&T Bancorp’s vice president of marketing.

He joined U.S. Bancorp, now AmeriServ, in 1993, becoming the company’s communications and marketing manager. He rose through the ranks there and retired as the bank’s executive vice president in 2014.

Hummel spent 20 years helping to organize the Johnstown Folkfest, later renamed the AmeriServ Flood City Music Festival, and has held seats on the boards of the Johnstown Area Heritage Assocation and Johnstown Industrial Development Corp. He is a past president of the Sunnehanna Country Club board of governors and spent five years as chairman of the Bishop McCort High School Board of Trustees.

He and his wife, Vanessa, split their time between Johnstown and Florida.

The 2018 Business Hall of Fame induction ceremony will be held April 20 at the Frank J. Pasquerilla Conference Center in downtown Johnstown.

The event, which is co-sponsored by the Cambria Regional Chamber of Commerce and Junior Achievement of Western Pennsylvania, will begin with a reception at 6:15 p.m. Dinner will be served at 7.