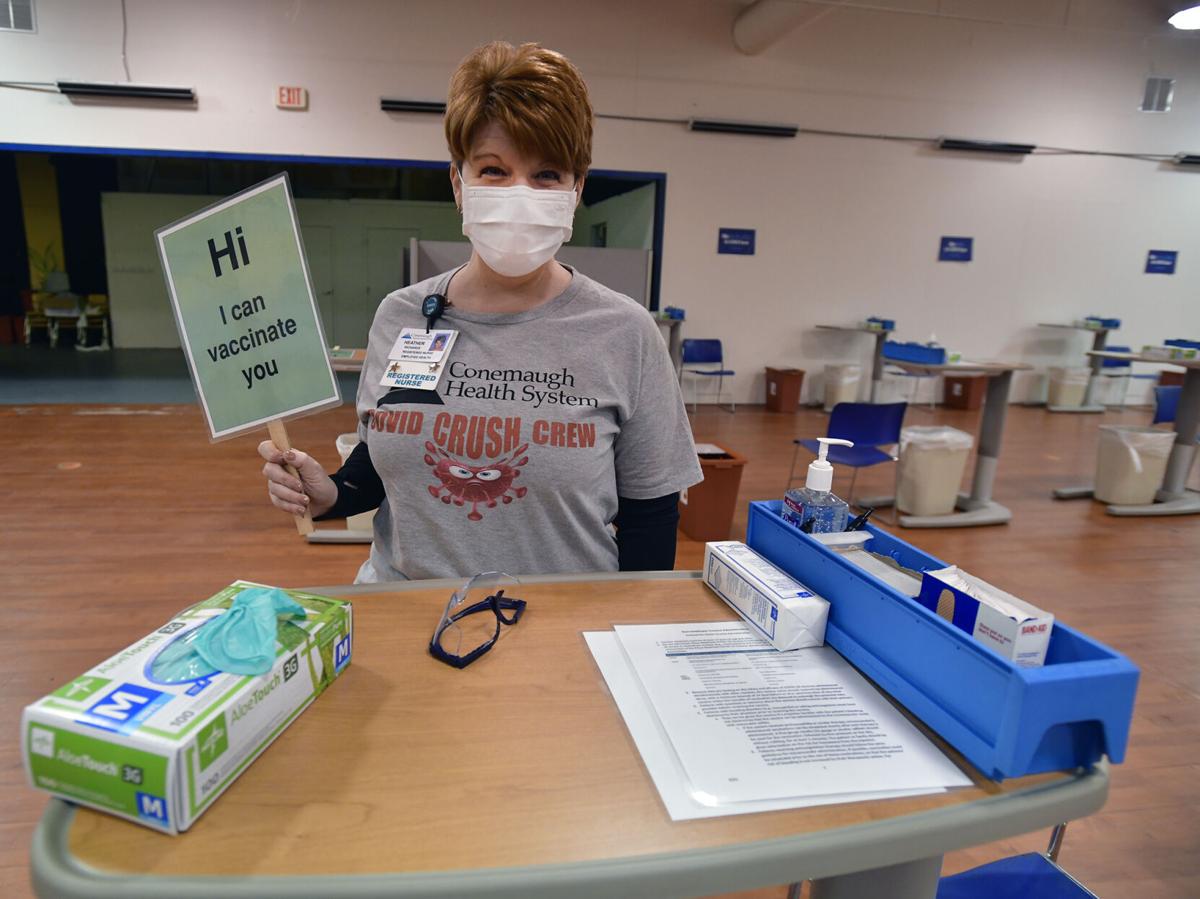 Heather Richards, Conemaugh Health System's manager of employee health, holds up a sign at a community vaccination clinic that was held on Monday, March 22, 2021, at the Galleria in Richland Township.

Heather Richards, Conemaugh Health System's manager of employee health, holds up a sign at a community vaccination clinic that was held on Monday, March 22, 2021, at the Galleria in Richland Township.

Heather Richards and her team at Conemaugh Memorial Medical Center are vaccinating residents at a feverish pace.

Conemaugh Health System’s manager of employee health, Richards is the “go-to person” coordinating COVID-19 vaccinations for employees and the community.

On a recent Saturday, Richards, hospital employees and students from Conemaugh School of Nursing vaccinated 900 people at a clinic in The Johnstown Galleria in Richland Township.

“We’ve talked with older people who have come in to get vaccinated and they have cried,” Richards said. “They’re saying that they haven’t seen their family in a year and this is the first time they’ve been out of the house.

“A lot of them get very emotional during the vaccination process because this is life-changing for them,” she said. “It’s really been good, with all the darkness the last year has brought, to have this one shining light.”

Conemaugh staff have given more than 9,000 people as least one dose of the Pfizer vaccine since Jan. 16.

Richards is a Conemaugh Valley High School alumna. She went on to graduate form Conemaugh School of Nursing and the University of Pittsburgh, earning a bachelor’s degree in nursing.

Richards became head of the Employee Health five years ago.

“I’ve been on the front lines since the first day with our employees who have been exposed, and it’s been really, really challenging,” she said. “It feels like we’re starting to come out on the right side of the pandemic.”

Passion for caring runs deep in her family.

But she will tell you that life in heath care is no joy ride. Richards experienced this first hand when husband Carl Richards, a state trooper at the Ebensburg barracks, was stricken with COVID-19 in December and was in the hospital for seven days.

A public communications operator at the barracks died of the disease, she said.

“It was probably one of the most terrifying experiences of my life,” Richards said. “It’s been an awful few months for him but he’s finally getting better. So for me, it really hit home.”

“She is incredibly passionate,” Kristen Hudak, the health system’s marketing and communications director, said. “Her enthusiasm, positivity and leadership have made the entire process work.”

Richards said she cannot picture herself working in any other field.

“Never, never, not even for two seconds,” she said. “I could never see myself doing anything else anywhere else.

“The good days outweigh the bad,” Richards said. “You never go home not feeling like you made a difference.”

Shaun Gregory doesn’t mince words. He took over on Dec. 1 as Portage Borough police chief, replacing Ed Miller, who retired after 12 years, and he knows expectations are high.