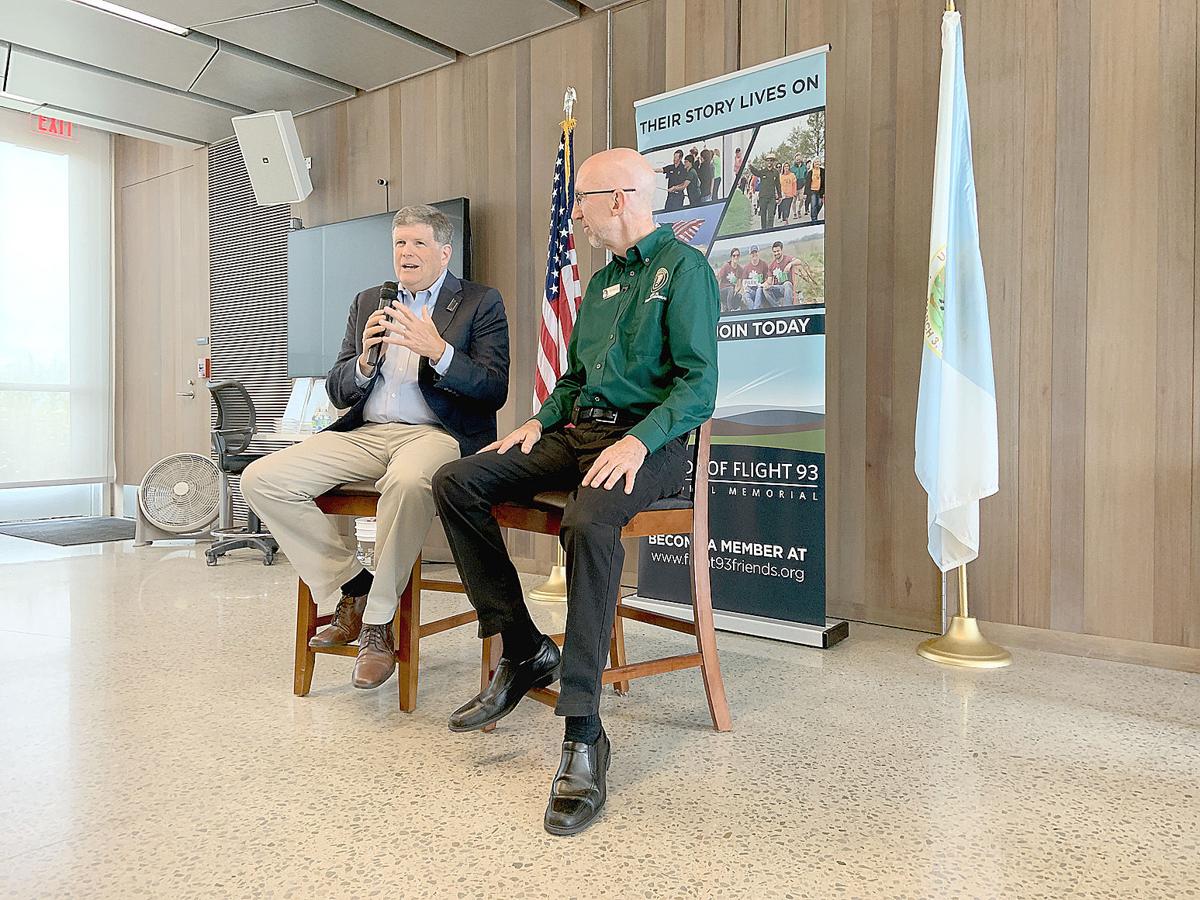 Paul McNulty (left), former U.S. deputy attorney general and lead prosecutor in the trial of Sept. 11, 2001, conspirator Zaharias Moussaoui, was the final guest in the Flight 93 Speaker Series on Saturday, Aug. 17, 2019, at the Flight 93 National Memorial in Shanksville. Tom McMillan (right), author and board member with the Friends of Flight 93, moderated McNulty’s talks at noon and 2 p.m. in front of standing-room-only audiences. 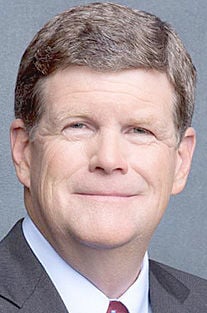 Paul McNulty (left), former U.S. deputy attorney general and lead prosecutor in the trial of Sept. 11, 2001, conspirator Zaharias Moussaoui, was the final guest in the Flight 93 Speaker Series on Saturday, Aug. 17, 2019, at the Flight 93 National Memorial in Shanksville. Tom McMillan (right), author and board member with the Friends of Flight 93, moderated McNulty’s talks at noon and 2 p.m. in front of standing-room-only audiences.

SHANKSVILLE – As Paul McNulty parked his vehicle outside the U.S. Department of Justice building on Sept. 11, 2001, he heard that one of New York City's World Trade Center towers had been hit by an airplane, dismissing it as "a bizarre aviation problem."

By the time McNulty, then associate deputy U.S. attorney general, entered his office, the second World Trade Center had been hit.

"We realized something is going on here and the United States was under attack," he said.

A short time later, as the Department of Justice building was cleared, McNulty found himself in the FBI Strategic Information & Operations Center with former director Robert Mueller. The Pentagon was hit by another airplane, and the location for United Flight 93 was lost due to another hijacking.

"Our lives I knew had changed forever," McNulty said.

McNulty was the last guest as part of this summer's Flight 93 Speaker Series and, on Saturday, addressed standing-room-only audiences at the Flight 93 National Memorial's Learning Center.

Three days after Sept. 11, 2001, McNulty was confirmed as the U.S. Attorney for the Eastern District of Virginia, tapping him as the lead prosecutor in the case against Zacarias Moussaoui, a co-conspirator in the terror attacks.

Moussaoui had been arrested in August 2001 by federal investigators on an immigration violation. Moussaoui was a French citizen who was trained in Afghanistan after swearing his allegiance to Osama Bin Laden and al-Qaida, McNulty said.

There were "red flags galore about what he was up to," McNulty said, when he was arrested in Minnesota and taking flight training courses.

McNulty, who was eventually promoted to deputy U.S. attorney general in 2005, said Moussaoui was charged as a co-conspirator in the Sept. 11 attacks because of his knowledge of the infrastructure of the planning for those events. Many believe that, if Moussaoui hadn't lied to federal agents and cooperated when he was arrested in August 2001, the attacks a month later may have been prevented.

"It became the focal point of the investigation of all the events that occurred on 9/11," McNulty said. "We'll never know for sure what would have happened if Moussaoui were never arrested. It was a very complicated case legally with a lot of classified information."

Moussaoui pleaded guilty to most of the basic charges against him, McNulty said, so his trial in 2006 came down to punishment. A jury voted 11-1 to impose the death penalty, but without a unanimous vote, Moussaoui was sentenced to life in prison.

What struck McNulty the most about the Moussaoui case was hearing from the loved ones of those killed in the terrorist attacks.

Also difficult was the enjoyment Moussaoui experienced hearing about the pain caused in an attack he wished had been larger, McNulty said.

"His lack of remorse was extraordinary," McNulty said. "He was definitely groomed for participation in (Sept. 11)."

Saturday was McNulty's first visit to Flight 93 National Memorial. Although he expected to see a crime scene, McNulty said he was amazed by the thoughtful architecture, details and focus on the passengers and crew of United Flight 93.

"There was part of me that was actually holding back from coming," said McNulty, who is now president of Grove City College. "I felt the flood of the emotions coming back from that day."

McNulty said he's always been appreciative of "the heroism that occurred within 15 minutes" as the passengers and crew of Flight 93 learned about the other attacks on the United States and took action to fight back against the hijackers of their airplane.

Many theories and evidence collected after the attacks show the terrorists on United Flight 93 may have been heading toward the White House or the U.S. Capitol in Washington.

"Those passengers sensed this," McNulty said, and if either of those buildings had been attacked, "the impact is beyond our imagination."

Brooke Neal, director of programs for Friends of Flight 93, said McNulty was able to provide "a different angle than we've ever had before."

The annual speaker series has drawn hundreds of visitors since it kicked off in May.

"All summer long, we've been hearing, 'How lucky are we to show up and be able to hear this?' " Neal said. "It puts things in perspective. It's still current events history."