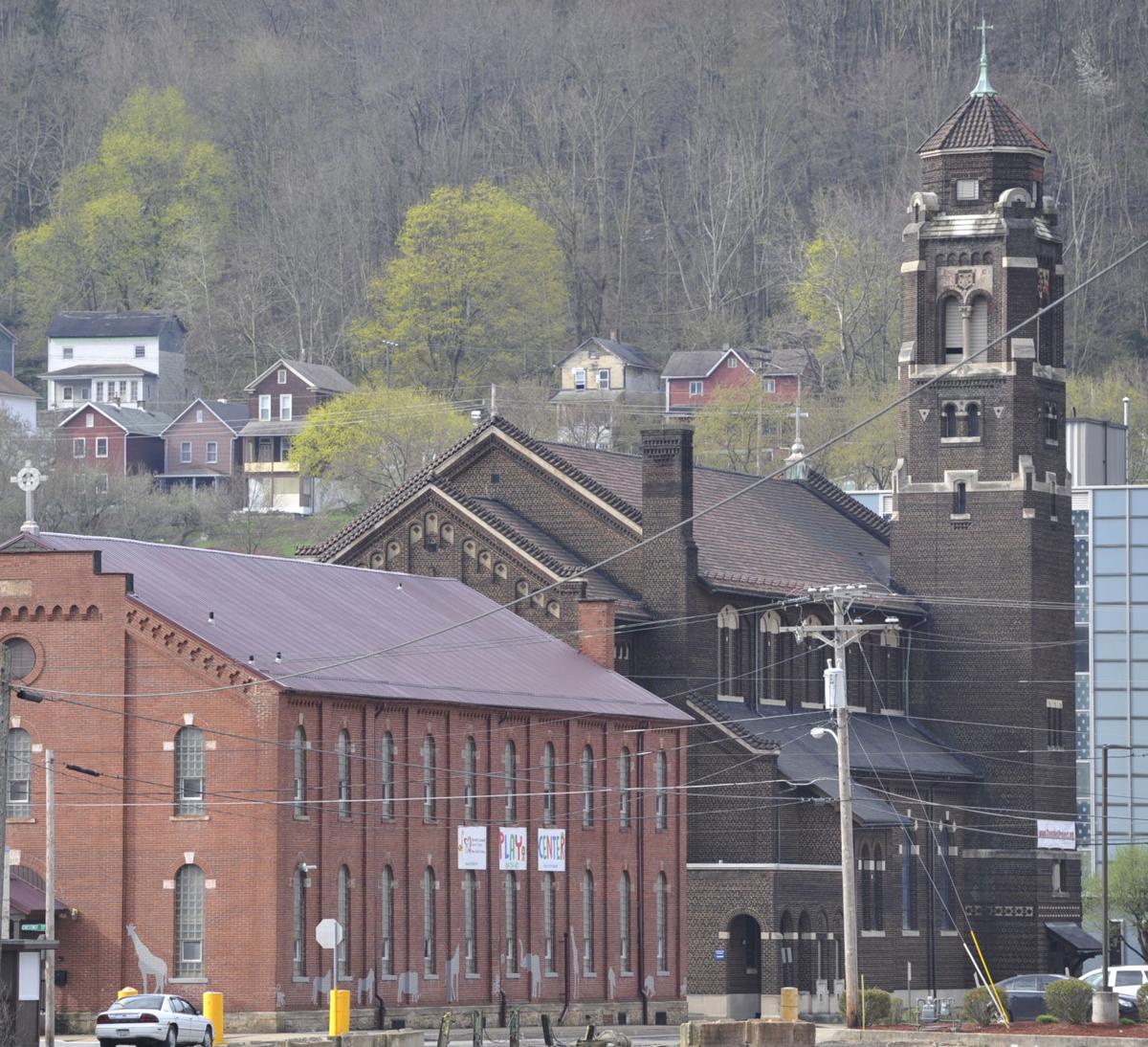 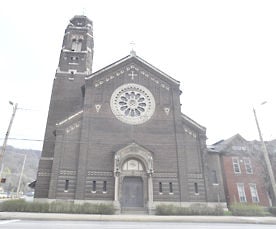 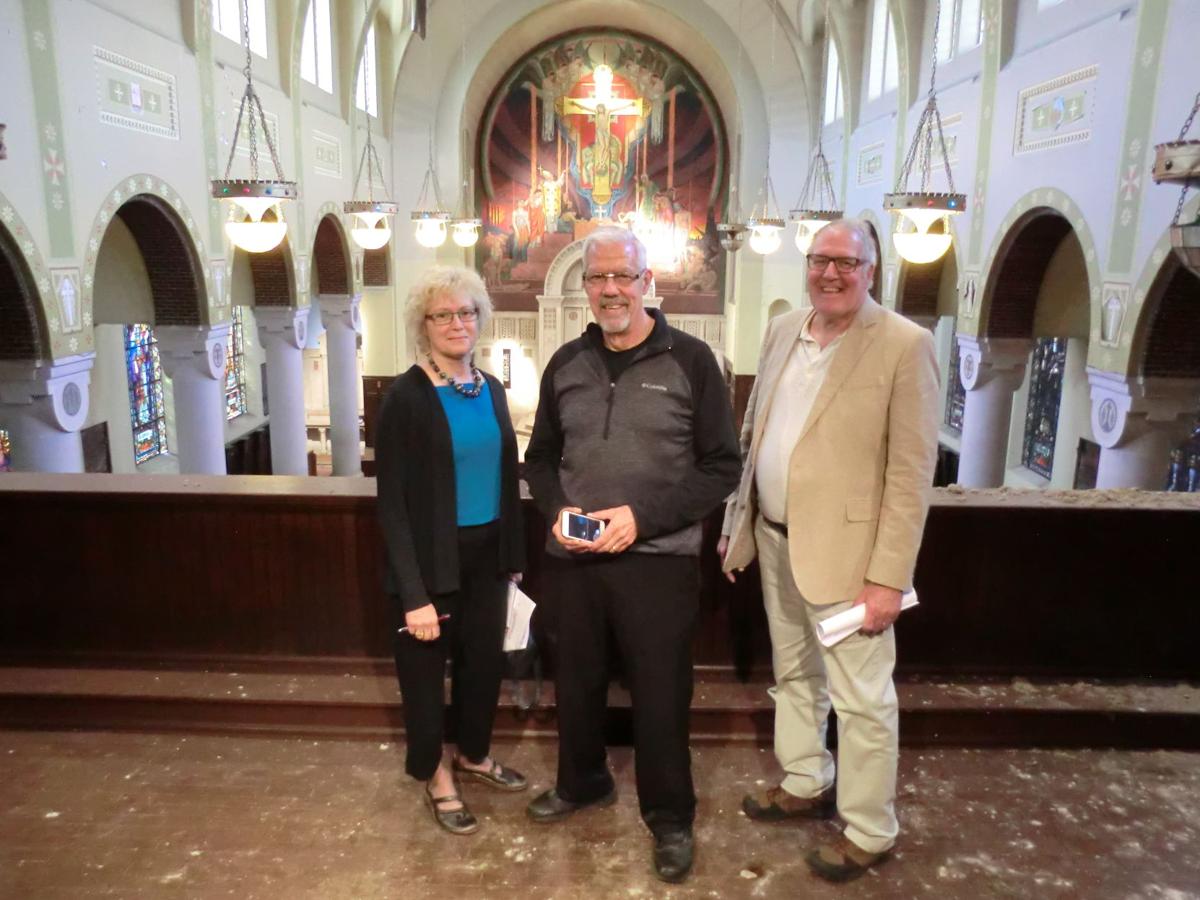 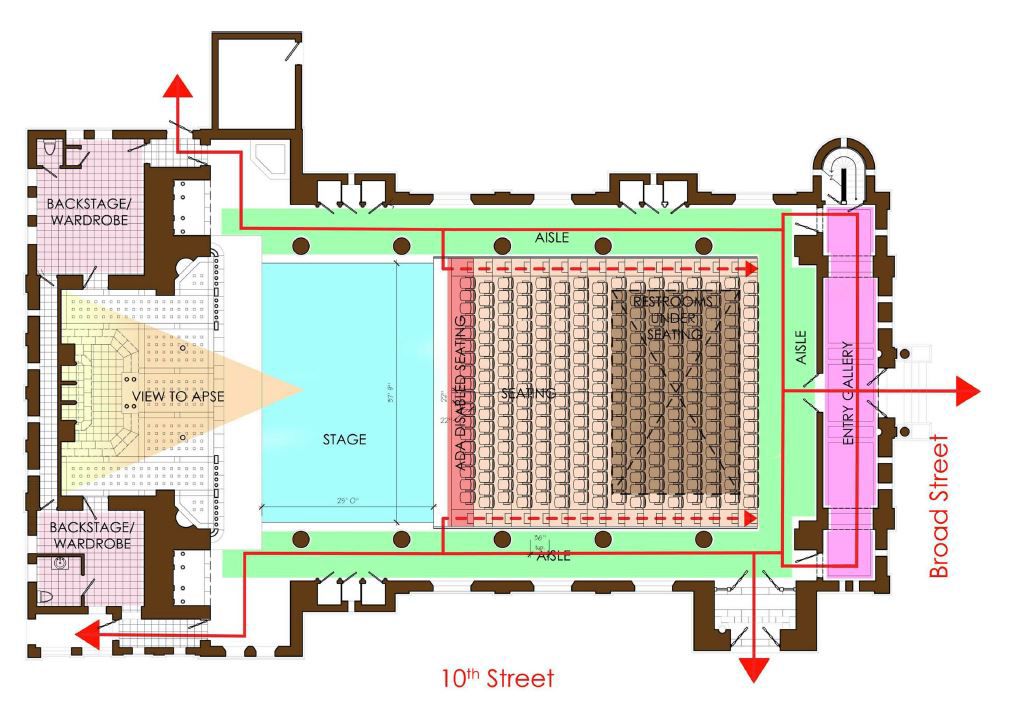 An artist’s rendering of the planned theater to be housed inside the former St. Columba Church, 318 Broad St., in the Cambria City section of Johnstown. Wednesday, April 12, 2017.

An artist’s rendering of the planned theater to be housed inside the former St. Columba Church, 318 Broad St., in the Cambria City section of Johnstown. Wednesday, April 12, 2017.

The grand Cambria City building that once housed the congregation of St. Columba Roman Catholic Church will someday become home to a theater and event space – if the results of a feasibility study launched Wednesday are favorable.

“We’ve been working on this concept for six years now,” Teresa Marafino, president of 1901 Church’s board of directors, said.

1901 Church, a nonpofit corporation, owns the former St. Columa’s building and is the sponsor of The Steeples Project, through which the theater project is being funded.

“To finally see this feasibility study underway is very gratifying. This is the first vital step in this project to save Columba and return the building to active use in Cambria City.”

Thousands of European immigrants came to Johns-town and other northeastern cities in the early years of the 20th century, looking for work in steel mills and coal mines.

Shows at the new theater will explore that history, The Steeples Project said in a press release.

The theater is planned to complement other institutions in the community – the Johns-town Heritage Discovery Center’s “Through Immigrant Eyes” exhibit and the Wagner-Ritter Steelworker’s House Museum, both also located in Cambria City, among them.

Local theater companies will also be able to stage their own productions in the new theater, The Steeples Project said.

If all goes as planned, project leaders expect the building to re-open as a theater sometime in the next three to five years, Dave Hurst, project manager for The Steeples Project, said – but “an awful lot of that is going to depend on how effective we are in raising the funding we’re going to need,” Hurst added.

Three theater consultants from North Carolina have spent the past three days meeting with community leaders throughout Johnstown, gathering information that they will convert into a business plan, marketing analysis and case statement of support for the conversion project.

“We’re looking to the consultants to provide us with cost estimates of what it’s going to take to achieve our vision for Columba ... (and) proposals on how we do programming, how we put this building to work to earn its keep,” Hurst said.

Consultant Michael C. Hardy, a professor at East Carolina University and president of Michael Hardy Management, said Wednesday that he believes the St. Columba building has the potential to become a great theater.

It “could be a flexible seating space,” he said – “a cabaret environment, or a proscenium theater, or a theater in the round, or a banqueting space.”

“You could have a huge variety of events here,” he said.

That flexibility will be key to the theater’s survival, Hardy added: “The business plan depends on there being a lot of events – you generally try to find between 100 and 150 separate events in a year to make a building like this sustain itself financially.”

Before any events can be held in the building, however, a great deal of cleanup work must be done.

The statues that once stood in niches around the church’s perimeter and the artwork depicting the Stations of the Cross have been reclaimed by the Diocese of Altoona-Johns-town – in some cases, leaving holes in the plaster of the building’s walls through which the original brickwork can be seen.

Because the building has not been heated for the past six years, it “expands and contracts with the seasons,” Hurst said. That continuous movement has left fallen plaster lying in heaps throughout the church and strips of the ceiling’s canvas covering hanging down in tatters.

“We were having some problems with sections of the painting for the same reason,” Hurst said, gesturing to the massive, spectacular painting of Jesus’ crucifixion on the church’s back wall.

“The center sections of the painting were starting to pull away from the frame.”

With the aid of some donated scaffolding and volunteer labor, Hurst said, The Steeples Project was able to hire a contractor to stabilize the crumbling painting and put it back into place, keeping it in its place of honor and ensuring that it will remain the building’s centerpiece for years to come.

Other minor architectural crises have arisen and been solved over the years since the church closed.

“We had a side roof, over what was the priest’s sacristy, that failed,” Hurst said.

A grant – and “a very generous donation from local supporters” – allowed workers to replace that roof, he added.

But the building is still strong and structurally sound, Hurst said. The Steeples Project is working with Somerset architect Michael Freidhofer of Landmarks SGA to determine the structural requirements the former church must meet to support the theater design.

After the feasibility study wraps up in December, The Steeples Project will launch a capital campaign to raise the money needed to construct the theater and develop its programming.

“Beyond that, I wouldn’t even want to guess,” he said.

Brian Reese, a Johnstown native and The Steeples Project volunteer, said his family’s history has been intertwined with that of St. Columba’s for generations. He, his father, his grandfather and his wife were all baptized there, and he married his wife under the painting on the church’s back wall.

“Our history with this church goes back 85 years now,” he said.

His family’s history epitomizes the key role Cambria City’s churches played in Johnstown’s cultural history, Reese said, citing “how important these churches were as community centers for the area” and for “the various immigrant groups that migrated here.”

“This was the Irish church,” he said. “There was a German church, a Polish church, so there’s a deep connection here to the immigrant history of Johnstown.”

The building itself is worthy of preservation, too, Reese added.

For all those reasons, Reese said, he’s proud to be a part of the effort to ensure that the building remains in use.

“Just to see this building live on in a way that respects its heritage and what it represents – culturally, personally, historically – I think the intended purpose of a theater is an excellent idea.”

Funding for the $40,000 feasibility study was provided by a Pennsylvania Historical and Museum Commission Keystone Historic Preservation Grant; grants from the Community Foundation of the Alleghenies’ Robert Waters Charitable Trust and Lift Johnstown Fund; a grant from the Henry A. Jordan, M.D., Preservation Excellence Fund for the Mid-Atlantic States of the National Trust for Historic Preservation; a contribution from Peoples Gas Company; and matching funds provided by 1901 Church, which also owns The Grand Halle on Broad Street in Cambria City.

“We cannot thank these organizations enough for their support,” Hurst said.

For more information on The Steeples Project, visit www.steeplesproject.org or call 536-7986.

Brian Reese said his family has a deep-rooted history with St. Columba Roman Catholic Church in the Cambria City section of Johnstown.