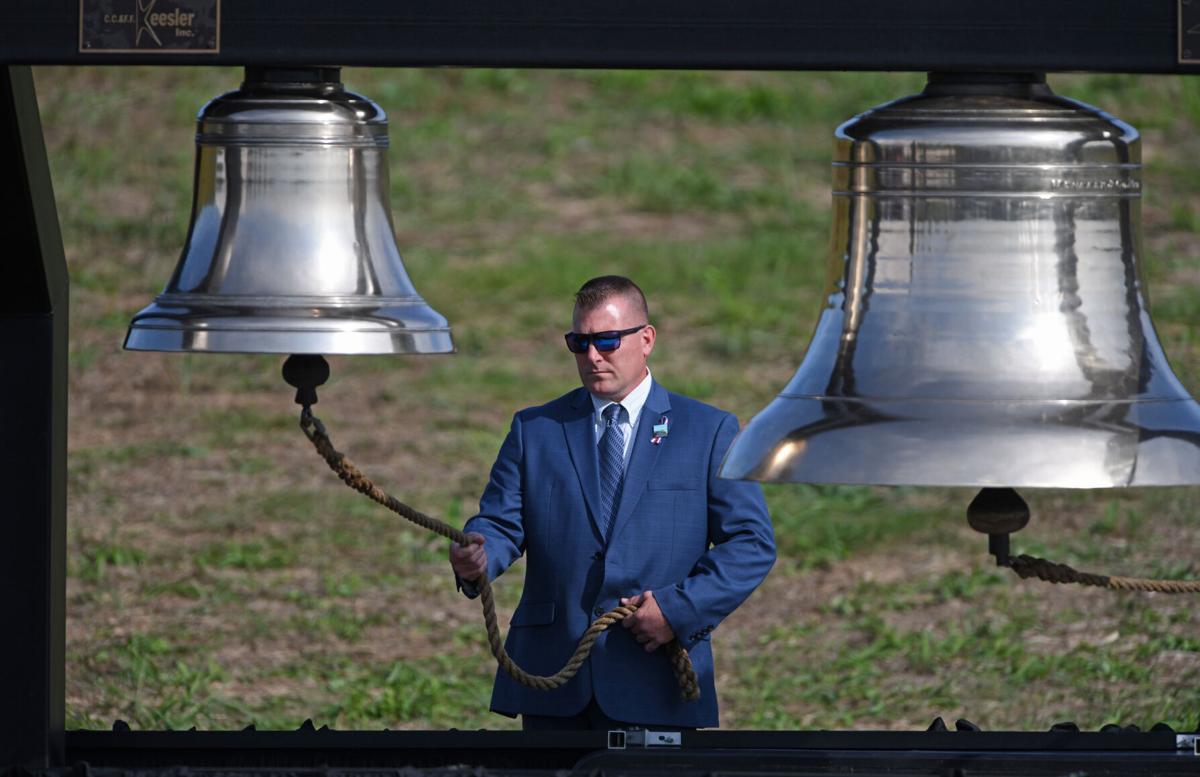 Christian Boyd of Stoystown rings one of the Bells of Remembrance during the presentation of names during the 20th anniversary observance and memorial ceremony at the Flight 93 National Memorial near Shanksville, PA., Saturday, Sept.11, 2021.Boyd was a first responder to the Flight 93 tragedy. 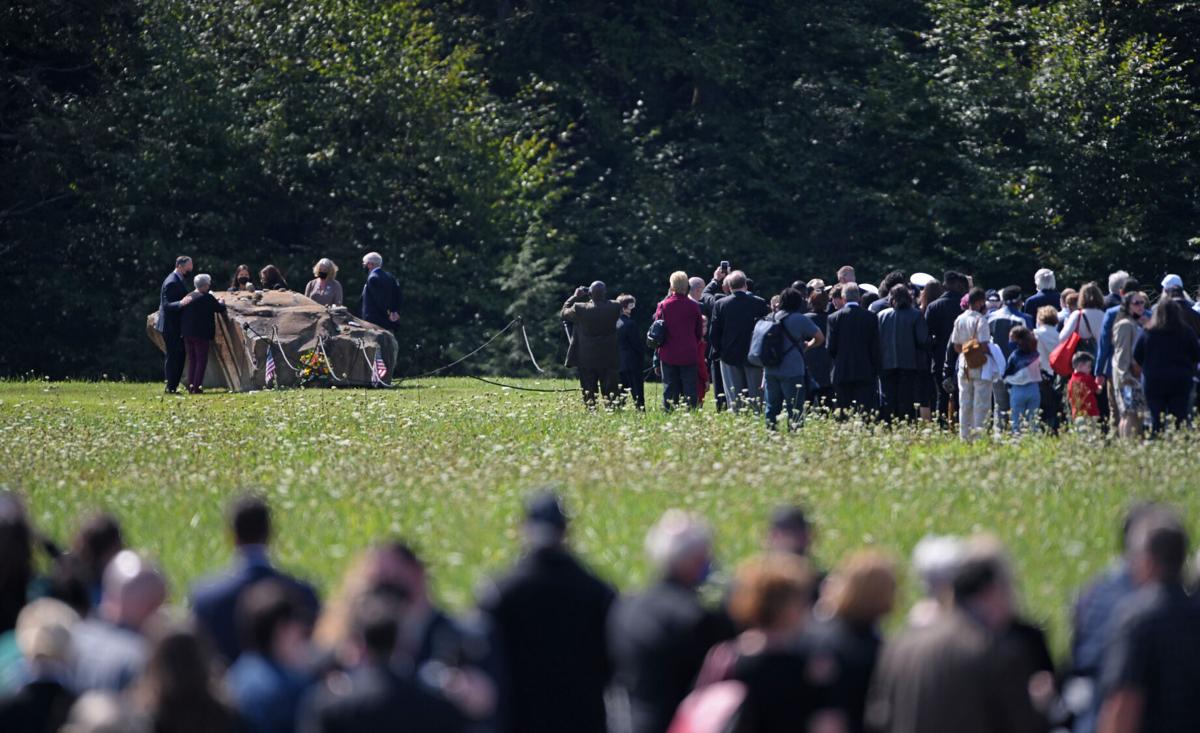 Family and friends of Flight 93 walk out to the crash site during the 20th anniversary observance and memorial ceremony at the Flight 93 National Memorial near Shanksville, PA., Saturday, Sept.11, 2021.

Christian Boyd of Stoystown rings one of the Bells of Remembrance during the presentation of names during the 20th anniversary observance and memorial ceremony at the Flight 93 National Memorial near Shanksville, PA., Saturday, Sept.11, 2021.Boyd was a first responder to the Flight 93 tragedy.

Family and friends of Flight 93 walk out to the crash site during the 20th anniversary observance and memorial ceremony at the Flight 93 National Memorial near Shanksville, PA., Saturday, Sept.11, 2021.

SHANKSVILLE, Pa. – Saturday’s 9/11 anniversary ceremony was a moment for honoring the heroes of United Airlines Flight 93 – who fought back against hijackers on Sept. 11, 2001, and gave their lives while saving others.

For their family members, the day was also another opportunity to make sure those 40 heroes are not forgotten – and to keep alive the stories of Flight 93 for those too young to have experienced the events of 9/11.

The actions of the passengers and crew members helped force that plane down short of its likely target, the U.S. Capitol in Washington, D.C.

Ed Root, of Allentown, participated in the ceremony – reading the name of his cousin, who was a flight attendant on Flight 93: “Lorraine Grace Bay, our angel.”

“Kids don’t know,” Schenkel, Bay’s goddaughter, said. “Since so many of them don’t have those memories, the education and awareness are very important.”

Root said: “We need to help the young people understand the ‘us’ part of this, so that to them, it’s not just a footnote to history.”

That has been the mission of Flight 93 National Memorial – at first, flags and other personal items left at a chain-link fence, but now a completed 2,000-acre site under the National Park Service.

Fran Mainella was director of the National Park Service in 2001, and visited the site Saturday to experience the finished memorial – with its Wall of Names, Visitor Center and Tower of Voices.

“Our goal was to, one – get this site designated as a national park, and then two – to get the land acquisition done. …,” she said. “And I truly shed a tear when I came here today. All I saw the first time was an empty field. What has been done here, with the support of the families and the friends group, is fantastic.”

Jeff Reinbold was park superintendent for western Pennsylvania, including the Flight 93 National Memorial, when much of the fundraising for the $60 million park was being done – along with a design contest for the memorial and property purchases.

“It’s definitely bittersweet,” Reinhold, now an administrator with the NPS in Washington, D.C., said Saturday near the Memorial Plaza. “You still feel deeply for the family members, now 20 years later, and that’s still important. But it’s also very rewarding when they tell you how much they like the weekend and the memorial.”

Keith Newlin, former park superintendent, who directed much of the early construction, said: “It’s a different feeling now, but it’s good to see so may folks here.”

“Twenty years ago, terrorists chose a random group of Americans on a routine flight to be collateral damage in a spectacular act of terror,” Bush said in his address. “The 33 passengers and seven crew of Flight 93 could have been any group of citizens selected that day. In a sense, they stood in for us all, and the terrorists soon discovered that a random group of Americans is an exceptional group of people. Facing an impossible circumstance, they comforted their loved ones by phone, braced each other for action, and defeated the designs of evil.

“These Americans were brave, strong, and united in ways that shocked the terrorists – but should not surprise any of us. This is the nation we know, and whenever we need hope and inspiration, we can look to the skies and remember.”

Vice President Kamala Harris, in her keynote address, called the Flight 93 crash site “hallowed ground … sanctified by sacrifice.” She saluted “the courage of those on board, who gave everything they possibly could.”

The 9/11 anniversary ceremony also featured remarks by Stephen Clark, superintendent of Flight 93 National Memorial for the National Park Service; Dave Kurtz, captain of the USS Somerset; Pennsylvania Gov. Tom Wolf; Gordon Felt, president of the Families of Flight 93 group; and Deb Haaland, secretary of the U.S. Department of the Interior.

Patrick White, of Naples, Florida, the vice president of Families of Flight 93, returned to Shanksville to pay tribute to his cousin, passenger Louis J. “Joey” Nacke. White’s son Joseph, 12, is named for Joey Nacke. White was a key player in the development of the national memorial.

“I’m at the beginning of processing it, as many family members are – now having completed so much of the memorial,” White said, “and I feel the opportunity to truly appreciate the healing power of this place, of what we’re creating here as families, with our partners. It’s resonating in my heart.”

Root said that even after 20 years, “the emotions run the full gamut – angry, sad, empty, full – all within 10 seconds.”

“I can think I’m fine, then suddenly I’m not,” Schenkel said. “What triggers it is usually something with one of the family members, maybe a hug.”

Or touching Bay’s name on a marble wall, encountering her picture in the visitor center, or hearing the chimes from the Tower of Voices echo across the field where Flight 93 crashed 20 years ago.

“Until you’re here,” Root said, “you can’t really understand the grandeur and the simplicity – at the same time.”

Standing on the memorial ground where Flight 93 crashed 20 years ago, former President George W. Bush urged America to remember not only the memory of the heroes who fought back in the sky that day – but also their legacy of selflessness that can still help unite the country today.