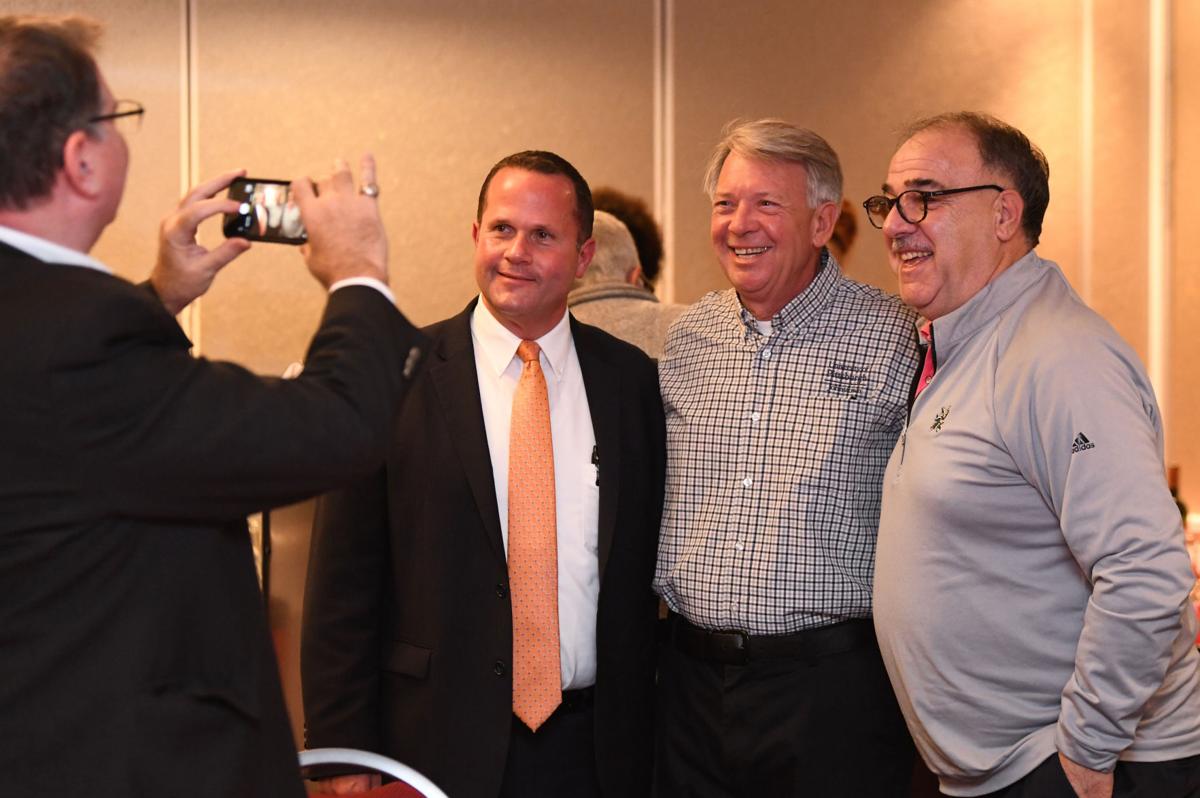 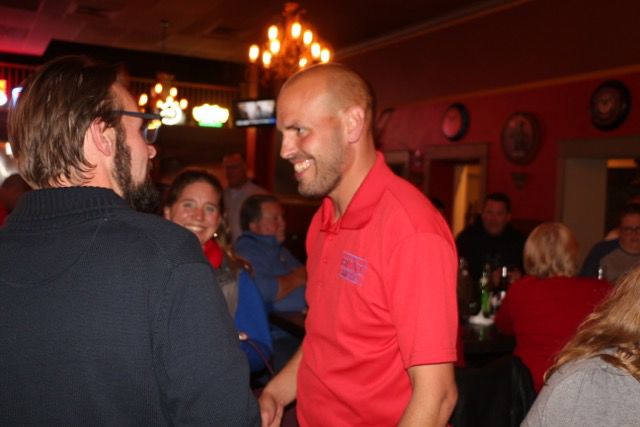 John Houser, left, of Ebensburg congratulates Scott Hunt on his victory in the Cambria County commissioners election on Tuesday, Nov. 5, 2019, in Ebensburg. 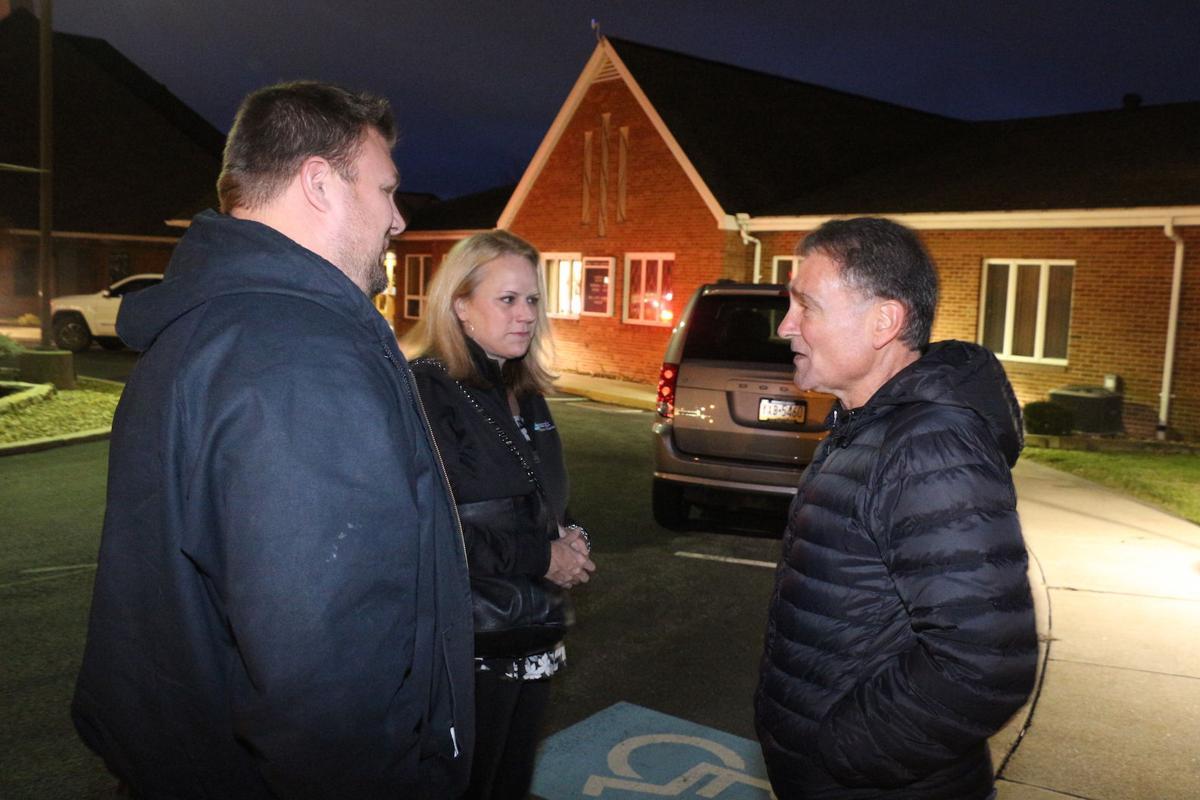 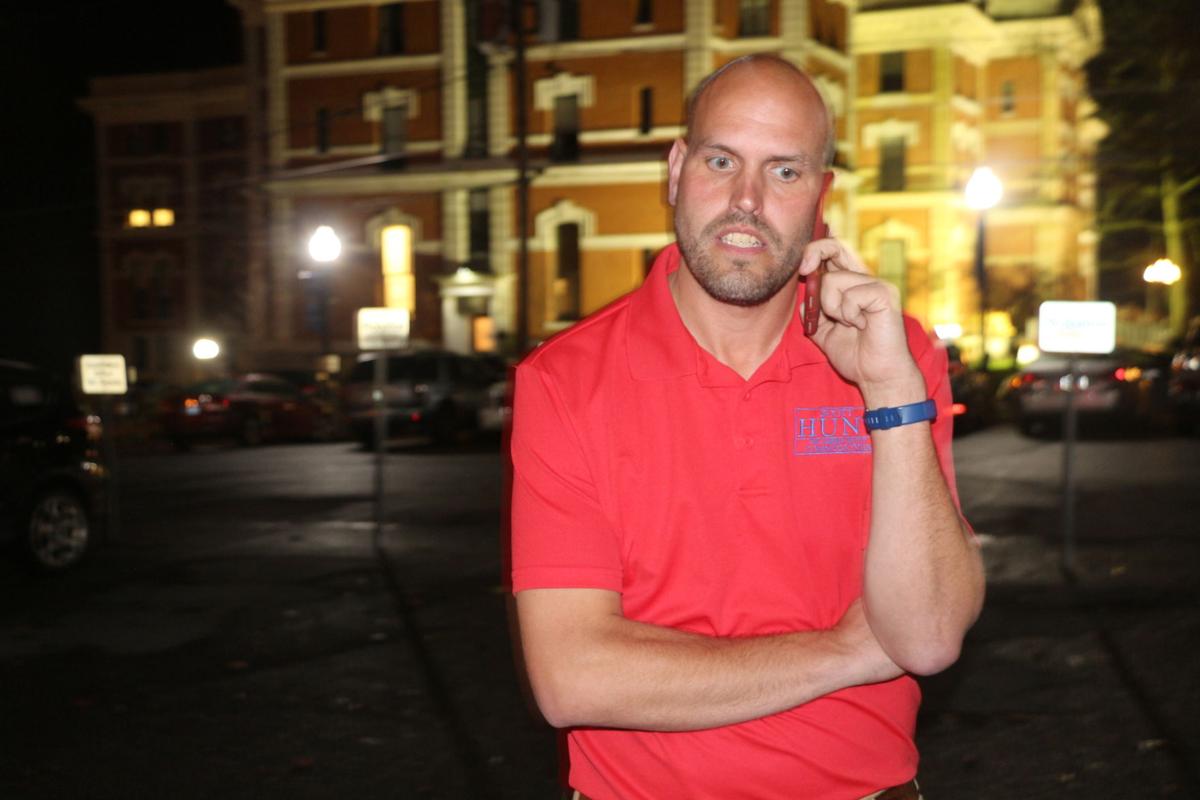 John Houser, left, of Ebensburg congratulates Scott Hunt on his victory in the Cambria County commissioners election on Tuesday, Nov. 5, 2019, in Ebensburg.

Cambria County's board of commissioners will keep a Democratic majority for the next four years.

Republican Jerry Carnicella trailed with 19% of the vote, or 11,417 votes, in the race for three seats.

Hunt, an Upper Yoder Township supervisor, attributed his victory to meeting with as many voters as possible and running a clean, independent campaign.

"I think it just shows that hard work does pay off," he said. "I talked about myself, not why others shouldn't be elected."

Hunt said his 12 years of experience as an Upper Yoder Township supervisor demonstrated his ability to work with others and made him the best candidate for the job.

"I'll work with whomever is elected to do what we have to do to better Cambria County," he said. "And that will always be my goal, no matter who I'm sitting next to."

Hunt, who ran for county commissioner in 2015, said lowering taxes and garbage collection rates have taken place during his tenure as a township supervisor.

With Tuesday's win, Hunt said he's focused on "moving into the position and working hard for the citizens of Cambria County."

Chernisky and Smith said their teamwork is what solidified another term in office.

"(The voters) trusted us," Smith said.

The incumbents' support of local business leaders, attention to department heads, work to address county infrastructure needs, and collaboration on solutions for the county's finances, along with issues including blight and drug abuse, were efforts appreciated by numerous voters both Chernisky and Smith said they spoke with Tuesday.

"For the last four years, we worked for the people of Cambria County," Chernisky said. "We're thankful they recognized the job we're doing."

Chernisky and Smith won the 2015 election and entered office facing a $9.5 million general fund deficit. After voting to reopen the 2016 budget and making more than $1 million in cuts, both voted in favor of a 5-mill tax increase.

Both said they knew the decision was unpopular with voters, but saw no other way to improve the county's financial health.

In 2017 and 2018, Chernisky and Smith supported county budgets that cut property taxes a half mill each year, which is approximately $600,000.

The county now has a $2.3 million general fund surplus, has reduced its outstanding debt by about $17 million and has received two upgraded bond ratings from S&P Global Ratings.

For three consecutive years, the county has also paid off its annual tax anticipation note early, saving taxpayers $100,000 in interest each year.

"We're righting the ship," Chernisky said. "We inherited a mess."

Chernisky, who earned his third term as commissioner Tuesday, was the board's minority commissioner during the previous administration and voted unsuccessfully against previous budgets that he says anticipated a 97% rate of tax collection. In reality, Chernisky said 92% of Cambria County residents pay their taxes.

Chernisky and Smith noted their efforts to fix county-owned, structurally-deficient bridges and demolish blighted properties countywide through participation in Act 89 and Act 152.

Act 89, which Cambria County enacted in 2016, places a $5 fee on county vehicle registrations for use on specific projects, including rehabilitation and replacement of county bridges.

Of Cambria County's 26 bridges, 11 were structurally deficient, and, to date, Act 89 dollars have allowed for the rehabilitation or replacement of eight county-owned spans.

The commissioners also enacted Act 152 in 2017, which allows the county's recorder of deeds office to collect a $15 fee on certain deeds and mortgages and put the money in a demolition fund for blight removal.

Although Act 152 is "not a silver bullet," Chernisky and Smith said the measure is creating opportunities for all of Cambria County's municipalities to address blight and tear down more dilapidated properties than in years past.

Chernisky and Smith pledged they'd be prepared to continue to work as a team, as they have with minority Republican Commissioner Mark Wissinger, who did not seek re-election.

"Commissioners are equal, we all have the same role," Chernisky added. "We don't have to agree on everything. We have trust in each other, we value each others' opinions. We're going to govern. We're going to do our jobs."

Carnicella, a Patton native, said his loss was due to "corruption in both parties."

"That doesn't mean we stop trying to change the system," he said.

Carnicella, who has previously competed for state representative and state senator, said he plans to run against state Rep. Frank Burns next year for the 72nd District.

"The fight for the people goes on," Carnicella said.

Carnicella was the top vote-getter in May’s primary election, with 3,823 votes or nearly 23%.

Raising revenues can happen "if we start running this county as a business, which means making money," he said. "You have to get to a point where you are a revenue-creating entity as a county. That's our only way out."

Carnicella acknowledged his intentionally delinquent status on his county real estate taxes, for which he's on a payment plan for 2017.

He said decided about 15 to 20 years ago to take about two years' worth of his county real estate taxes – about $4,500 – and invest it in the stock market.

"You only have to pay a small penalty for being behind," he said. "The penalty compared to what I made on that money is ridiculous."

Carnicella's payment of property taxes from two years prior each year prevents his property from reaching the annual tax sale in September.

Those who are delinquent on their taxes must pay 9 months of interest, along with a fee on their payments, according to the Cambria County tax claim office.

"Every year, I go up and I stay two years behind," Carnicella said. "I will always be two years behind, until I'm getting close to death and I'll pay them up so my kids don't have to pay them."

"These guys have more jobs available than we have people," he said.

The commissioners race was not without controversy.

Signs referring to Carnicella as "Conman Carnicella" were placed throughout the county, as well as those that popped up the week of the election criticizing Carnicella's real estate tax status and ideas for a county-owned drug rehabilitation/detention center.

The “Conman Carnicella” yard signs were paid for by the Committee to Elect Chernisky/Smith, according to a disclaimer at the bottom of each.

As the dust settles from the general election last week, one thing remains clear: not all of this fall’s row office races remained friendly.