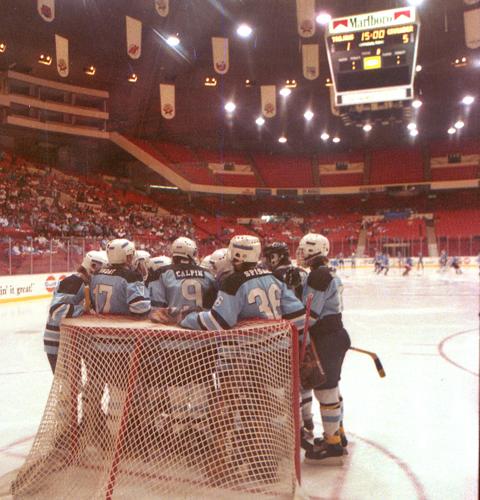 Above, members of the Greater Johnstown hockey team meet in the goal crease prior to the third period of their Pennsylvania Cup Class AA championship game against Father Judge at the Civic Arena in Pittsburgh on April 14, 1990. 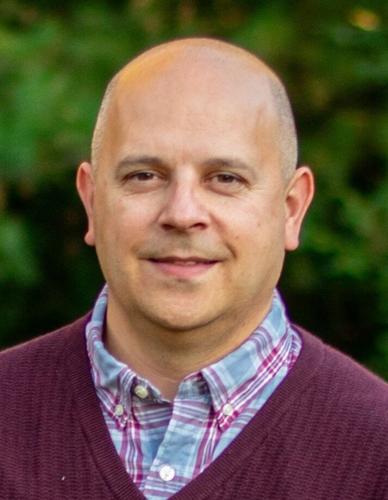 Above, members of the Greater Johnstown hockey team meet in the goal crease prior to the third period of their Pennsylvania Cup Class AA championship game against Father Judge at the Civic Arena in Pittsburgh on April 14, 1990.

At 5-foot-7, Brian Wincer didn’t appear to be the most intimidating or dangerous player on the ice during scholastic hockey games.

But opponents of the Greater Johnstown Trojans quickly learned that Wincer made up for a height disadvantage with blazing speed, hockey instincts and a knack for finding the net.

Any team that overlooked him based on his size paid for the mistake.

“What a tragic loss,” said Jeff Bush, Wincer’s former linemate on those teams in the early 1990s. “Brian was tremendous. He was just an absolute once-in-a-lifetime talent and an even better person. He was so humble. You would never, ever believe it. He was always willing to work with you and try to help you out to get up to his level. He was just on another level.

“Despite all his talents and his gifts, he was very humble and just a great guy.”

Wincer scored 194 goals and had 194 assists for 388 career points in four seasons at Greater Johnstown.

The 1992 graduate had 53 goals and 102 points as a senior, when coach Vern Campigotto’s Trojans advanced to the Class AA state title game and lost 4-0 to Council Rock at the Civic Arena in Pittsburgh.

Two years earlier, Wincer had a monster game in the Trojans’ state runner-up finish to Father Judge – a 6-5 last-second loss, also at the Civic Arena, then home of the NHL’s Pittsburgh Penguins. Johnstown fought back from a 5-1 deficit to tie the game and had momentum until the Philadelphia-area opponent scored in the closing seconds.

“He was amazing,” said Greater Johnstown graduate Keith Mock, who was Wincer’s teammate on both state runner-up squads. “His speed made him a special player. He was the fastest guy I ever played with. And he was smart. You watch (Mario) Lemieux or (Jaromir) Jagr in the day. They just knew where the puck would be. Brian had that ability at a young age. He knew where to go.”

Wincer led what then was called the Western Pennsylvania Interscholastic Hockey League (WPIHL) in scoring in his class during his final three seasons. As a sophomore on that memorable 1990 team, he topped all three classifications (A, AA, AAA) in scoring.

“He was such an incredible player,” said Luke Curtis, a 1994 Greater Johnstown graduate who played on Wincer’s line in 1992. “I learned so much from watching him, the way he conducted himself on the ice and off the ice.”

Wincer had a record-breaking career at Millersville University, an ACHA Division II club hockey program in the Delaware Valley Collegiate Hockey Conference. He scored 157 goals and had a program-best 330 points.

Combining his high school and college numbers, Wincer had 351 goals, 367 assists and 718 points to his credit.

Wincer also had a successful coaching career at Millersville University, taking over the position while playing his senior season after the head coach stepped aside due to personal reasons.

“I played in the Pittsburgh Amateur Hockey League, the travel team,” said Bush, a U.S. Army veteran who now is a registered nurse in Camden, New Jersey. “Brian and I were inseparable back then. We came up together through the ranks playing hockey in Johnstown as long as I could remember – since we both could walk.

“Our dads would be up at crazy hours of the morning to drive us to arenas all across Pittsburgh to play hockey. The dedication of our fathers was tremendous. Brian was just dedicated to his craft.”

‘Get him the puck’

Wincer came from a hockey family. His father, Matt, is well-known for his volunteer work at the amateur level and was an organizer of the successful Thanksgiving Tournament formerly held at 1st Summit Arena. Matt Wincer also owned a van that many players fondly remember as their mode of transportation to western Pennsylvania rinks during travel hockey season.

“This is probably the first time I’ve seen Mr. Wincer in 20 years,” Curtis said after attending a memorial service in Butler County on Thursday. “When we played for the Warriors, the whole point of us being on the same team was to keep these guys together so they could get more ice time. Remember, 30 years ago, ice time wasn’t as available as it is now.

“Mr. Wincer drove us to the games. If it wasn’t for him I wouldn’t have been able to be a part of it.”

Brian Wincer got his start – and gained valuable experience – by competing against older, more physical players. Brian tagged along and skated with older brother Matt Jr. and his friends. His brother Michael also is a former Trojans player.

“I’ve known Brian since the age of 5. I met him at Morning Mites in a learn-to-skate program,” said Mock, now a machinist at Johnstown’s Penn Machine Co. “He was so good right away that they pulled him up early to play on his older brother’s team. My first time I played with him was probably in 1983 or ‘84 and I played with him until we graduated in 1992 on the second state team.”

By the time he reached the varsity level, Brian Wincer had an edge other players didn’t possess. He skated as a freshman and was a key player the next year on the 1990 state runner-up team.

“My goal was just to try to get him the puck,” Bush said. “He was a year older than me. He was small, shifty and fast. I was the bigger guy on the team. I was Brian’s protector. Get him the puck and make sure no one messed with him when we were out there on the ice.”

The unit had chemistry as well as a scoring touch.

“That same line played on the Johnstown Warriors that year,” said Curtis, a production supervisor at a dairy in Lansing, Michigan. “That whole season, as special as it was, we were like a family that year. We were together so much. I was probably with him more than my own family that year.”

Brian Wincer went on to coach hockey at Lampeter-Strasburg School District and in the Keystone State Games.

He is survived by his wife Carolyn and their children, Brenna and twins Cameron and Cole Wincer.

“We’re devastated by this. He was way too young. It’s such a shock,” Bush said. “He was a terrific talent and a terrific hockey player and by all accounts in great shape. It’s completely out of the blue.”

“It’s been a complete shock. It’s been a horrible week,” he said. “I was 16 years old (during the Trojans state runner-up season). I keep replaying that whole year. I knew what was going on was special at the time, but now I’m appreciating it even more nearly 30 years later.”

Grant Norris recently hit four home runs in a span of approximately 24 hours. It’s been that kind of Johnstown Collegiate Baseball League season so far for the Somerset native and Duke University player.