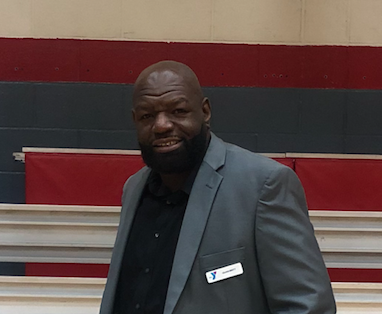 Quan Britt settled into his new position as program director of the Greater Johnstown Community YMCA on Monday amid the uncertainty associated with the COVID-19 pandemic.

The YMCA located on Haynes Street remains closed to the public due to coronavirus concerns. Day camp and child care services are scheduled to reopen on June 8, but the YMCA must wait for the statewide restrictions to be lifted by Pennsylvania Gov. Tom Wolf before the facility fully opens to the public.

“Right now my goal for the first 30 days (after the YMCA reopens) is to make sure we can have as smooth as possible a safe transition back.”

Britt is well-known in the area through his background in athletics as well as for his enthusiastic and upbeat approach often revealed on his social media posts.

He is a believer in the community. Britt is a solid fit in the team assembled by new CEO Shawn Sebring at the Greater Johnstown Community YMCA, which recently celebrated 150 years in the city.

“Quan brings a maturity, some amazing community connections, a love and commitment to this community,” Sebring said. “Those are all things we really want to be and have as the ‘Y’ moving ahead.”

As a former Greater Johnstown Trojans athlete, Britt, 43, is a believer in developing the younger generation through sports, especially in basketball. His sons Imil and Izir Britt each had successful careers at Greater Johnstown.

Izir, better known as Izzy, drew plenty of community support throughout the region the past few months after his senior season at Greater Johnstown was ended by an illness and lengthy stay at a Pittsburgh hospital. Quan Britt said Izzy is doing much better now.

Britt has turned to another Greater Johnstown graduate, Joe Greenwood, who played Division I football at Temple University in the late 1980s.

Greenwood is a certified personal trainer who operated his own training business in Delaware since 2003.

“I reached out to Joe and he agreed to be my personal mentor,”  Quan Britt said. “He’s been working at the YMCA in Delaware for years now.

“Joe is a Johnstown guy and he always has the best interest of his city in his heart,” Britt said. “He gave me some ideas. We’d like to take it to the next level.”

Greenwood is part of the Bear-Glasgow Family YMCA in Bear, Delaware.

“I just told Quan to really focus on building strong families – getting the parents and the kids involved in as many things as possible,” Greenwood said in a telephone interview.

“With the youth program, if we can get the kids in here, the adults come as well. You’re making sure both the children and the adults are getting fit.”

Like Britt, Greenwood found a calling at the YMCA.

“I want to give back to the younger kids. This was a passion I wanted to do for a long time,” said Greenwood, who had six career interceptions at Temple University (1985-88) and played two seasons for Frankfurt, Germany, in the former World League of American Football (1991-92). “I decided to work with young kids and help them develop from a health standpoint and just being a mentor to them.”

Once the Greater Johnstown Community YMCA is permitted to open for regular activities, Britt is eager to implement a few programs.

“Some of the things I want to do immediately would be to get the kids back in the gym,” Britt said. “I want to put on a foul-shooting contest where the kids can come in two at a time or three at a time. Get a basketball in their hands and get a little bit of competitiveness. The same thing with a 3-point contest.

“We’d like to figure out a way to open up the track for our elders to be able to come in and walk with the proper spacing and be safe all the way around. I’m mainly focused on doing things with social distancing and making sure everybody’s safe.”

Their son had spent more than a month as a patient at UPMC Children’s Hospital of Pittsburgh and finally returned home to Johnstown amid the turmoil of COVID-19 uncertainty.