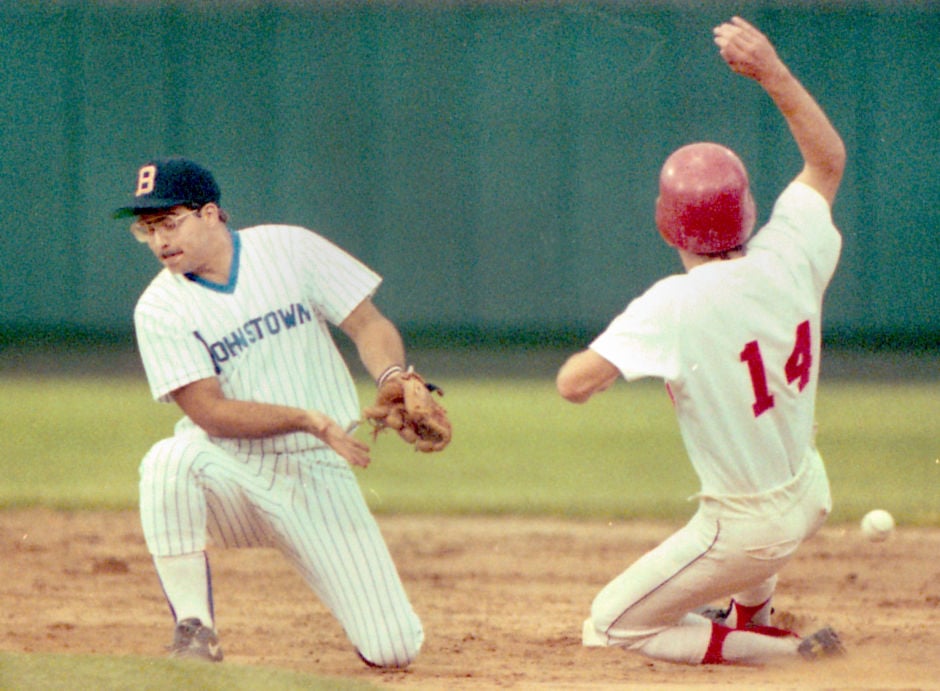 Russia’s Sergei Stashkevich (right) steals second base as Johnstown shortstop Bill Gregory covers the bag on May 18, 1991, at Point Stadium.

Russia’s Sergei Stashkevich (right) steals second base as Johnstown shortstop Bill Gregory covers the bag on May 18, 1991, at Point Stadium.

What had been known as the Cold War between the United States and the Soviet Union had nearly reached an end when the Russians came to Johnstown in May 1991.

A group of standouts hastily had been assembled from among the eight teams that soon would begin regular-season play in the Johnstown Junior League.

The Russian National Team had been touring Pennsylvania and competing in a sport the country had just added to its national program four years earlier.

The goal from a Russian perspective was to gain experience in advance of the 1992 Summer Olympic Games in Barcelona, Spain.

“I spent a lot of time with them. A real nice bunch of guys. Just down to earth,” said Pitt-Johnstown Associate Professor William Kory, who speaks Russian and served as an interpreter for the country’s national baseball team during the Johnstown visit in 1991.

“The interesting part is, they were pretty skilled players, but they might have started playing baseball at age 15 or 16. The real basic fundamentals that our kids would have acquired when they started playing at 5 or 6 years old, that’s the thing the Russians didn’t have.”

Led by manager Sam Zambanini of Alberter’s and coaches Forrest Mazey of Pepsi-Cola and Charley Mastervich of Bergman’s, the Johnstown Junior League all-stars beat the Russian National Team 10-6 on May 18, 1991, in front of an estimated 1,000 fans at the Point.

“That was a fun time,” Zambanini said. “That was when they were just starting to have Olympic baseball. Their team was preparing for the Olympics. It was just neat to work with kids from all the other teams in the league and certainly it was really cool to see – because baseball wasn’t really something the Russians had been focusing on at that time.”

The Russian squad finished the tour 0-9 after the loss in Johnstown.

‘Good for the city’

According to statistics on the 1992 Olympic Games, the Russian team wasn’t among the eight countries that qualified to play baseball in Barcelona in 1992.

“It was good for the kids. It was good for the city,” said former local manager Dee Dee Osborne, whose Pepsi-Cola teams had won three of the previous four Johnstown Junior League titles entering that 1991 game. The JJL champion advanced to the All American Amateur Baseball Association tournament each August.

Osborne was involved in the early efforts that eventually led to the game being played.

He said then-Tribune-Democrat Managing Editor Larry Hudson had received a call about the possibility of a game between a local team and the Russians. Hudson then reached out to Osborne.

“They’re coming at their own request,” Hartnett told The Tribune-Democrat in a May 9, 1991, article. “They had heard about the AAABA Tournament and the way fans here support it.”

Once on the field, the Junior League players had an obvious edge in experience.

“You could see (the Russians) were new to the game,” Osborne said. “One time, there were guys on first and second and the ball was hit to their pitcher. Instead of going for a double play he just threw it to first. The fundamentals weren’t there yet.”

Hilltop Boys Club’s Jeff Karoly sparked a four-run fourth inning with a run-scoring triple down the right-field line. Karoly also had a double and a two-run single for the Johnstown team. Bergman’s Brad Janidlo had two singles in Johnstown’s 11-hit attack.

“I thought it was a pretty exciting game. I remember we hit the ball pretty well,” said Janidlo, now a teacher in the Greater Johnstown School District. “It was a pretty awesome experience. The guys in the dugout, I remember talking about the Olympic team. You associate the Olympics with the best players around the world. We weren’t sure what to expect.”

“I still have a photo from that game framed and up (on the wall),” Stewart said during a telephone interview from Pittsburgh on Friday. “I was throwing the ball down to second base in the photo. I was 19 or 20 and it was an honor to be selected.

The local umpiring crew included Russ Bowers behind the plate, George Stiffler at first base, Willis DeBouse at second base and Ron Goisovich at third base.

Zambanini said the Russians were eager to gain experience and improve.

“I remember their coaches trying to pick our brains for some ideas on how to develop those instincts and the strategy,” Zambanini said. “(Coach) Forrest Mazey from Pepsi-Cola was one of the guys helping me and the Russian coaches sat down with us to pick our brains.”

“Americans are leaders in baseball,” Russian manager Georgi Abzamov said through interpreter Kory in the May 19, 1991, newspaper article. “We’ve learned a lot from the Americans. Everything that we’ve achieved so far, we owe to American baseball.”

Quan Britt settled into his new position as program director of the Greater Johnstown Community YMCA on Monday amid the uncertainty associated with the COVID-19 pandemic.