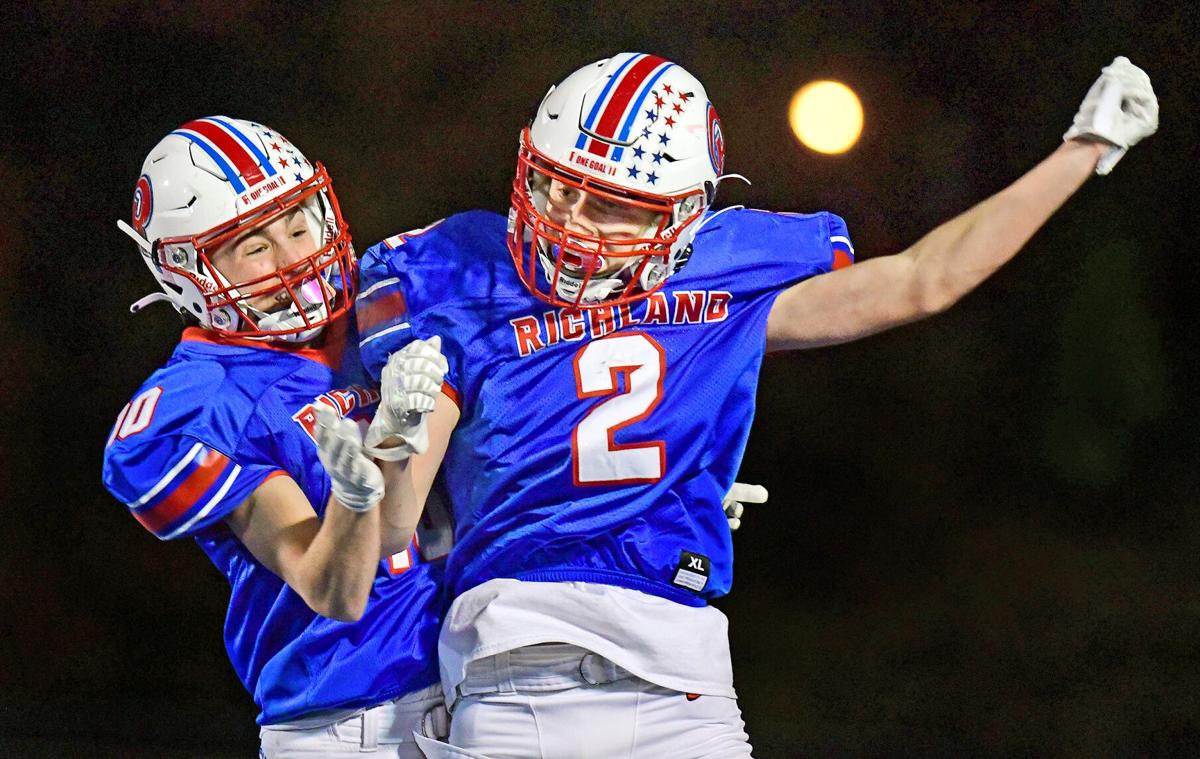 Richland running back #2 Grayden Lewis (right) celebrates a 54-yard touchdown run with wide receiver #10 Ryan McGowan during the first quarter of the game at Herlinger Field at Richland High School on Friday, October 9, 2020. 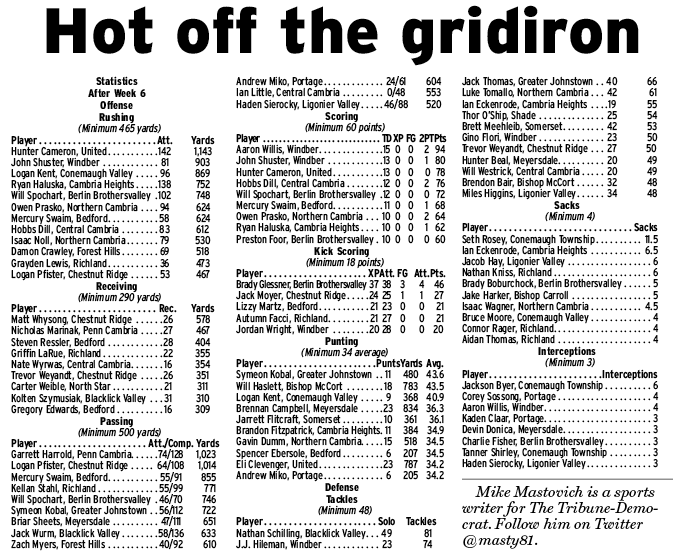 Richland running back #2 Grayden Lewis (right) celebrates a 54-yard touchdown run with wide receiver #10 Ryan McGowan during the first quarter of the game at Herlinger Field at Richland High School on Friday, October 9, 2020.

When Richland lost two of its team leaders to early-season injuries, the Rams turned to their playmaking quarterback, an experienced offensive line and a group of young contributors.

It’s been a winning combination for the District 6 Class AA fourth-seeded Rams (5-1), who will make their ninth playoff appearance in the last 14 seasons on Saturday night against fifth-seeded Central Cambria (3-2) at Herlinger Field.

“We lost Jake Sabol and Allen Mangus (in the first two weeks),” Rams coach Brandon Bailey said of a pair of senior running backs who also stood out on defense. “Those guys were the heart and soul of our team on both sides of the ball and certainly were difficult losses. Our young players, coupled with a veteran offensive line, have really allowed us to get where we want to be and in good position entering the playoffs.”

Junior quarterback Kellan Stahl has displayed poise and the ability to make the key play at the right moment – a trait he’s had since first seeing time at quarterback late in his freshman season and last year as a starter on a 6-AA championship team that advanced to the PIAA semifinal round.

“It certainly doesn’t hurt to have a quarterback like Kellan, who’s been through the battles and has the experience to get the ball to the right guys,” Bailey said. “Our offense has a run-pass option where the quarterback has to evaluate the best situation for the team. A lot of the credit goes to Kellan because we give him a lot of latitude as far as our game plan and allowing him to make those decisions on the field.”

It’s also created opportunities for the young Rams who are in line to build on a winning tradition.

Sophomore running back Grayden Lewis has 473 rushing yards, including 222 with three touchdowns last week in a 63-0 win at Greater Johnstown and 115 yards with one TD two weeks ago in a 56-13 win over Penn Cambria.

Sophomore Sam Penna has 11 catches for 180 yards and two TDs. Penna also is 5 of 5 passing for 128 yards and three touchdowns. He’s had a knack for completing the option pass to LaRue.

“We knew they all were talented kids and they worked really hard to put themselves in position to have success,” Bailey said. “They just needed experience, and the last couple weeks they got that experience. It’s that next-man-up mentality.”

“We knew in the second half of the season it was going to be a six-week regular season and then you go into the playoffs,” Bailey said of the schedule adjusted due to the COVID-19 pandemic. “We’ve been mentally prepared.”

Also in 6-AA: Bald Eagle Area (8) will visit Bellwood-Antis (1) on Friday; Cambria Heights (7) will travel to Southern Huntingdon (2) on Friday; and Northern Cambria (6) visits Marion Center (3) on Saturday in a Heritage Conference rematch of a game the Stingers won 28-7 in Week 5.

Crowded field: Penns Manor (No. 1 seed), Homer-Center (2), Portage (3) and Conemaugh Valley (4) have 6-A playoff byes, although Portage (4-1) will travel to Windber Stadium on Friday for its regularly-scheduled game against District 5-AA Windber (5-1).

Rounding out the 6-A playoff field are: Bishop McCort Catholic (12) vs. Bishop Guilfoyle Catholic (5) at Mansion Park on Saturday; Saltsburg (11) at Juniata Valley (6) on Saturday; Blairsville (10) at Williamsburg (7) on Saturday; and Purchase Line (9) at West Shamokin (8) on Friday.

Glendale (2-4) originally held the 12th spot but reportedly opted out rather than face Bishop Guilfoyle (3-2), a team that was idle during Week 6 due to a COVID-19 situation and quarantine. Bishop McCort Catholic (1-5) moved into the playoff spot, and Glendale is set to play West Branch (1-5) in a regular-season game on Friday.

Windber was able to play its game against Portage because the District 5-AA playoffs don’t begin until next week. Windber is the second seed.

Berlin, the top seed in 5-AA, will play Forest Hills in a non-conference, regular-season game the two programs scheduled this week. Berlin had an open date because it’s Week 7 opponent, Ferndale, is in a co-op with Conemaugh Valley this season.

Originally, Forest Hills was set to play Penn Cambria this week, but the third-seeded Panthers will visit second-seeded Tyrone in the 6-AAA playoffs on Saturday. Top-seeded Central will host fourth-seeded Westmont Hilltop in 6-AAA on Friday.

In 5-A, Conemaugh Township (3) travels to Northern Bedford (2) on Friday. Top-seeded Tussey Mountain has a bye.

Huddle Up! | Bailey, Paul thrive in their respective coaching journeys

In addition to both being in their 19th seasons as coaches at their respective schools, Doug Paul of Berlin Brothersvalley and Brandon Bailey of Richland have a few other things in common.