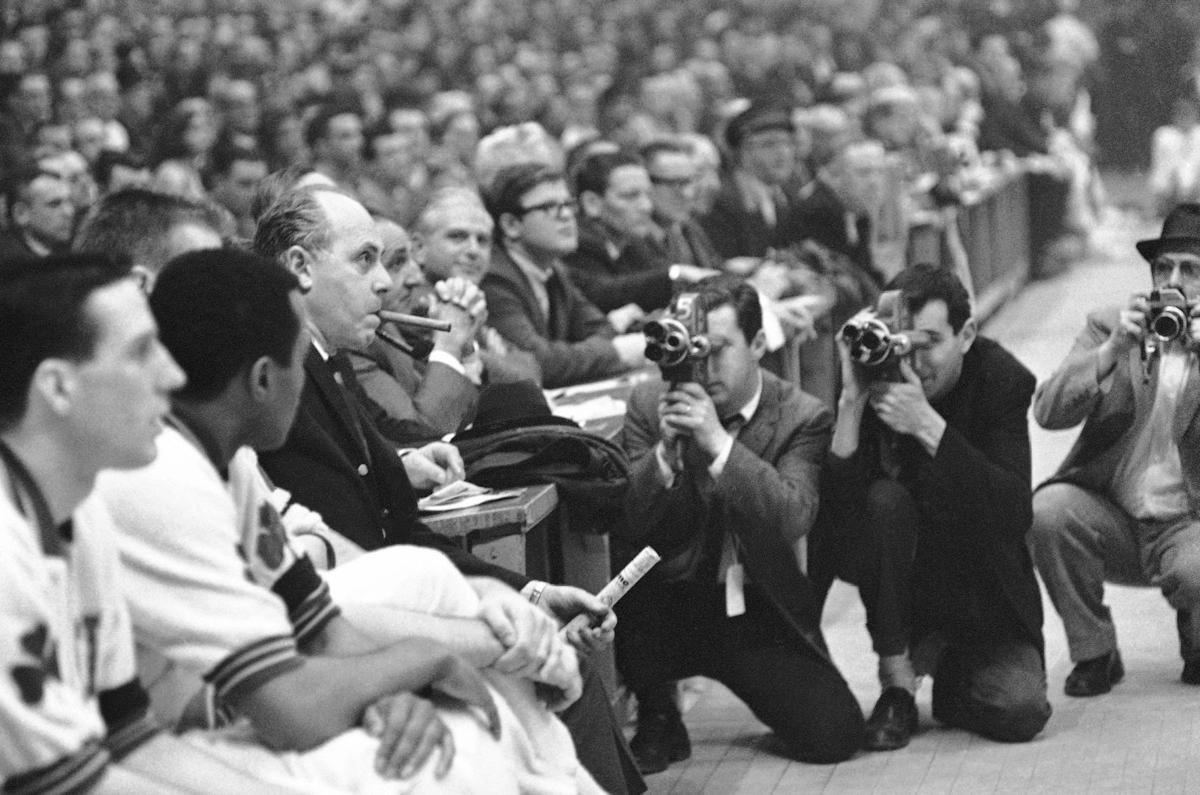 Coach “Red” Auerbach of the Boston Celtics smokes his traditional cigar near the end of the fourth period in game with the Philadelphia 76'ers in the Eastern Division National Basketball Association playoff game at Boston Garden on April 9, 1965. Boston won 112 to 94 to lead the series 2 to 1. (AP Photo) 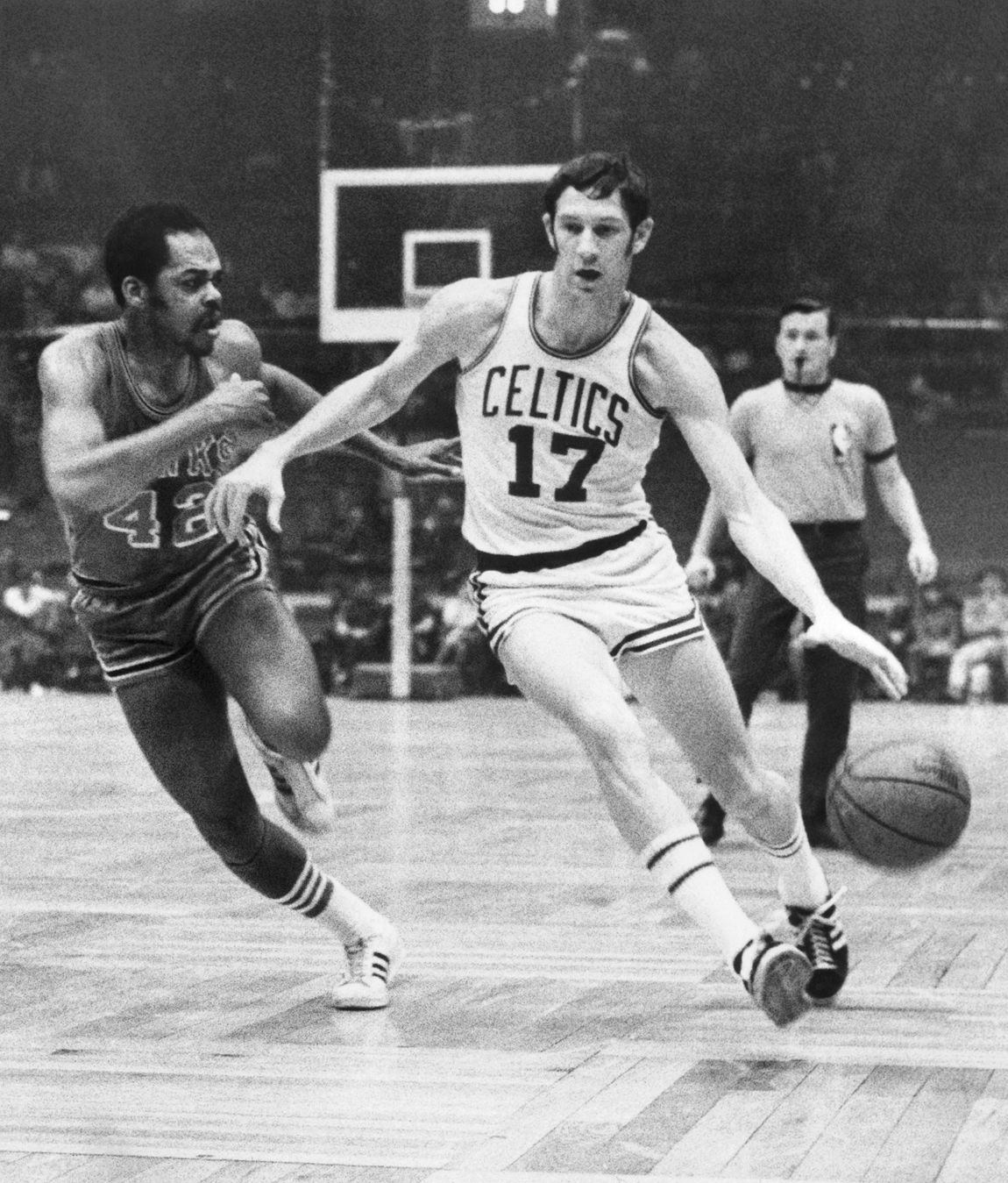 Coach “Red” Auerbach of the Boston Celtics smokes his traditional cigar near the end of the fourth period in game with the Philadelphia 76'ers in the Eastern Division National Basketball Association playoff game at Boston Garden on April 9, 1965. Boston won 112 to 94 to lead the series 2 to 1. (AP Photo)

The Boston Celtics had won eight consecutive NBA championships when the dynasty brought its game to Cambria County War Memorial Arena on May 6, 1966.

Even though 54 years have passed since the Celtics put up a lopsided 87-28 score against an alumni team from St. Francis College, Paul Litwalk still can recall the smoke rising from legendary coach Red Auerbach’s cigar.

“Right after the opening tip to start the game, Red Auerbach lit up his cigar,” said Litwalk, who then was a 22-year-old student home from what now is known as Youngstown State University. “He used to light them up when the Celtics were winning late in the game. He lit it immediately when they started the game.”

Auerbach certainly had fun. But on a more serious note, the exhibition game was played to raise money for former NBA Rookie of the Year Maurice Stokes, the legendary St. Francis College star whose promising professional career with the Cincinnati Royals had been cut short by a debilitating injury and illness in 1958.

“There was some who thought that the Celtics might perform against another NBA team or a select squad from the Eastern Professional Basketball League,” former Tribune-Democrat sports editor Fred Yost wrote in a column previewing the exhibition. “However, a stipulation in the contract requires the opposition to be provided by a St. Francis alumni group.”

Once the game started, Auerbach had good reason to light up his cigar, a ritual that would be unthinkable today.

“Of course, back in that day, the Celtics were a heck of a team,” said Litwalk, who later became the successful basketball coach and athletic director at Greater Johnstown High School. “The Celtics were on top of everything back in those days.”

Larry Seigfried led Boston with 25 points. John Havlicek, one of the Celtics’ stars of the era, made 11 field goals and scored 23 points. Don Nelson chipped in with 14.

Superstar Bill Russell, who won a NBA-record 11 championships during his 13 seasons with Boston, wasn’t listed in the Celtics exhibition game story, which was written by former Tribune-Democrat sports writer John W. Visnovsky.

“What I do remember about it is the Celtics really rotated. They didn’t bring in a full team,” Litwalk said. “They had eight or nine guys and rotated them in. They played a lot of zone even though in those days in the NBA you would play man-to-man. They also played some soft man-to-man defense. They were playing seriously.”

Oddly, despite the Celtics possessing eight consecutive titles, the exhibition didn’t attract a large crowd. The attendance was listed as 1,075 fans.

The game story in the next day’s newspaper appeared on Page 2 of the sports section. No photographs accompanied the Celtics story. Among the stories that made the front page of sports in the May 7, 1966 edition carried headlines such as: “Phils score 5 in 11th to Shade Pirates”; “Jets Set to Launch Season Ticket Sale”; “Women’s Dux Schedule Set”; “Triangle Softball Loop Opens Monday”; and “Meyersdale Junior High Basketball Dropped.”

As indicated by Auerbach’s early cigar, the game wasn’t very competitive. The NBA champs were playing an alumni team. The cause – raising money to help an ailing friend – was more significant.

“Playing as though their national championship was at stake, the Boston Celtics put on a sensational exhibition Friday at the Cambria County War Memorial,” Visnovsky wrote. “The St. Francis Alumni could not keep up with their more experienced opponent and made 14 of 58 tries at the hoop for 24 percent.”

In the second half, the game was cut short and the Celtics held a 15-minute clinic, “showing some of their patterns which led to an eighth straight NBA title.”

“It didn’t take Boston Coach Arnold ‘Red’ Auerbach long to light up his cigar, a traditional maneuver when the coach feels his team has the victory in the bag,” the article stated.

Mike Mastovich | Loss of AAABA Tournament to virus sparks emotional responses, pledges to be back in 2021

For the first 30 years of his life, Louisiana's Tyler Scheuermann has spent a week in Johnstown each August. As a newborn, Scheuermann was brought to the AAABA Tournament as part of the New Orleans Boosters contingent. Tyler won’t be in Johnstown for his 31st visit – at least not this August.